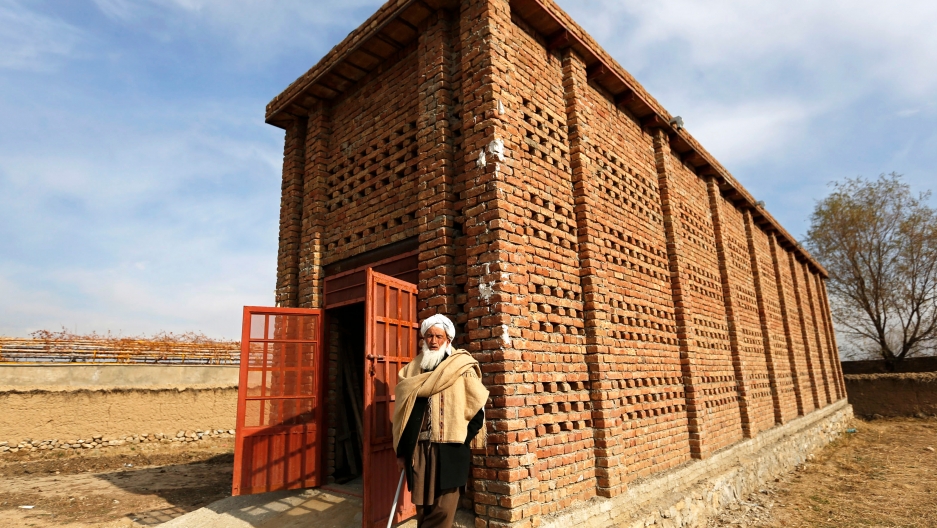 Afghan farmer Mohammad Malik stands outside his grape pitfall which was built by the US Agency for International Development (USAID) project in Parwan province, Dec. 13, 2014. International aid has been the mainstay of the Afghan economy since the Taliban were ousted in 2001, and donors, chiefly the United States, poured tens of billions of dollars into development. Yet, there are frequent examples of aid poorly spent, with little regard for the long-term viability of projects once money taps are turned off.

Corruption: It's the subject that gets a star turn in the so-called "The Afghanistan Papers" published by The Washington Post.

Over and over again, those interviewed for the "Lessons Learned" reports from the Office of the Special Inspector General for Afghanistan Reconstruction, or SIGAR, emphasize the toxic and central role corruption played in hampering the United States' efforts in Afghanistan from day one.

One estimate is that 40% of US aid to Afghanistan since 2001 has been pocketed by officials, gangsters, and warlords, drug lords and insurgents.

Sarah Peck is a lawyer and former diplomat who served as the anti-corruption officer at the US embassy in Kabul from 2009 to 2010.

Because of her experience, she was asked to read and comment on an early draft of the SIGAR report, long before it was made public by The Washington Post.

Peck spoke with The World's host Marco Werman about her insights.

Marco Werman: It was in 2009, the year you arrived in Kabul, that Mike Mullen, who was then the chairman of the Joint Chiefs of Staff, said corruption in Afghanistan was as much of a threat to the country as the Taliban. Is that what you found when you were there?

And what did you find specifically?

I look back and remember schools that were built that had teachers who never showed up. There were ghost teachers and roads that were built, but were never completed and courthouses that also were built and never used. They ended up being goat houses.

By goat houses, you mean buildings that had a purpose, but then not used except by goats as shelter?

Exactly. We were building schools and courthouses according to Western standards. And at the same time, there was no oversight for the building and there was also no operating budget for them, long term. So, there would be a building in the middle of a rural place with no use other than to store grain or goats. And in the process of building those buildings and those roads, the political elite with connections would get those contracts and then they would peel off their share and then it would go to subcontractors and down the line. And there was little oversight because it was so dangerous that aid workers couldn't actually go to the sites many times or detect whether or not people were showing up. And then I remember sitting in meetings where people were trying to address the problem of huge sums of money being put into suitcases and flown out of the country.

The report and interviews published in The Washington Post say the CIA, the US military, the State Department and other agencies used cash and lucrative contracts to win the allegiance of warlords and drug traffickers and defense contractors. What was the thinking behind that?

Well, for the people who are trying to counter corruption, we weren't part of that decision-making and we were learning about it in the press, I think, as the rest of the community was learning about it. But there was certainly a desire to persuade these leaders by paying them off rather than by pressuring them and conditioning the assistance on improved governance.

The really stunning quote that we see in The Washington Post report was that US officials were "so desperate to have the alcoholics to the table, we kept pouring them drinks." That was an unidentified interviewee in the report. The point being that pouring money into Afghanistan was actually fueling corruption. Is that what your task force concluded?

Yes, the answer is yes. We had [a session] in spring 2010 that brought together the leaders of the international community and leaders from Washington and from the embassy and the military to talk about all aspects of the mission in Afghanistan. And as the anti-corruption officer, I gave a report on the status of our efforts to fight corruption and informed my supervisor that I intended to say that our spending and our efforts were fueling corruption in Afghanistan. And I was told, if you say that, we're going to send you home. As it turns out, I did end up getting permission to say that to this entire community of leaders. And so there is no doubt, as of spring 2010, that that was the understanding of the entire international and US mission.

It strikes me that at the end of a fiscal year, it's a common thing for businesses to look at what they spent and whether they need the same amount for next year's budget or whether it would be excess — and possible waste. I mean, wasn't that a fundamental part of assessing the budget for Afghanistan at the Pentagon? Did they take that simple step?

My understanding was that there was money that was budgeted and then the people on the ground did not question that amount. Instead, they looked for every way possible to spend it. And there's this bureaucrat viewpoint that you must spend what you have because you might get less next year if you don't spend it all. And so as a result, I remember a USAID person who was supposed to be buying books and supplies like that, saying that he or she was buying art books as lavish books with colored plates because they were so expensive. And that was how they were able to spend their entire book budget. So, I think that was really more the problem is we had the budget and we wanted to spend it.

Related: We blew $17 billion in Afghanistan. How would you have spent it?

What were the main conclusions of your anti-corruption taskforce?

What we were doing then was trying to figure out ways that we might target the most egregious corrupt offenders in the government, and somehow, through some form of policy or action, prevent them from their actions. On my side, I was trying to advocate for even the most modest idea — like not sending some of these people to training in the US or to conferences or not appearing in photographs with them or not inviting them to official events. And I could not get any of these kinds of initiatives approved by the embassy.

Are you saying that no one in the US government was receptive to the criticism of what you were saying and your task force?

I think the problem was that people were well aware that corruption was a problem. I think they prioritized security as being even more important without the recognition that they were both intricately related to each other and that by having these officials be supported by the US, they were empowered, they became more brutal, they alienated their population — who also was alienated by the US because they thought the US must support corruption in these activities because they're supporting these people. And it was a vicious cycle that ultimately undermined our mission.