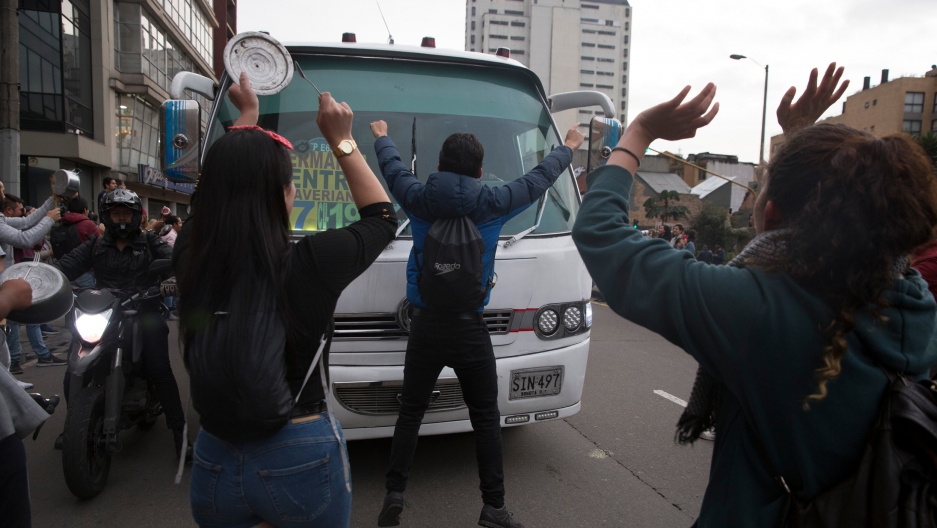 Colombian demonstrators stop cars in Bogotá, Colombia's large throughway, and bang pots in protest of their government in a cacerolazo on Nov. 22, 2019.

The banging erupted on Nov. 21, after hundreds of thousands of Colombians took to the streets in protest of their government in what was originally slated to be a one-day national strike.

They wielded pots, pans, forks, lids, spatulas, trays, whatever was at hand. The banging began in one small Bogotá neighborhood but quickly spread through the country like wildfire, a sign that Colombia’s demonstrations had taken hold as they had in Chile, Bolivia, and Ecuador.

Some people took to the streets, joining massive crowds in the cumulative roar. Others hung from their balconies, banging pots after the largely peaceful protests were met by tear gas and extreme force by Colombian police. Clouds of tear gas hovered over the streets of Bogotá, the country’s capital.

“A lot of people have their pans in the house, in the kitchen. .. It's, well, it's our weapon. It's the weapon we have in the streets. We're not going to throw rocks, we're going to do the cacerolazo, make noise so they hear us.”

“A lot of people have their pans in the house, in the kitchen,” said student protester David Cortes. “It's, well, it's our weapon. It's the weapon we have in the streets. We're not going to throw rocks, we're going to do the cacerolazo, make noise so they hear us.”

The phenomenon dubbed the cacerolazo, Spanish for "casserole," quickly grew to define the now days-long, anti-government protests in Colombia, and sent a unified message to the embattled government of President Ivan Duque: We will not be silenced.

So far, four civilians and three police officers have died in the protests. Among them was 18-year-old Dilan Cruz, who succumbed to wounds Monday, Nov. 25, after he was hit in the face by a gas canister launched by riot police.

Hours before Cruz died, Cortes expressed his fear of police violence: “That could happen to any one of us.”

Cortes has walked with friends among thousands in Bogotá, carrying a wooden spoon and dented frying pan tethered to his belt loop. The goal, he said, was to use the pans as a means to meet the violence and fear with a peaceful show of force as protests continued on for nearly a week.

“It's how we unite to demonstrate that we don't have to be violent to protest,” Cortes said. “It's the symbol of the marches, I would say.” 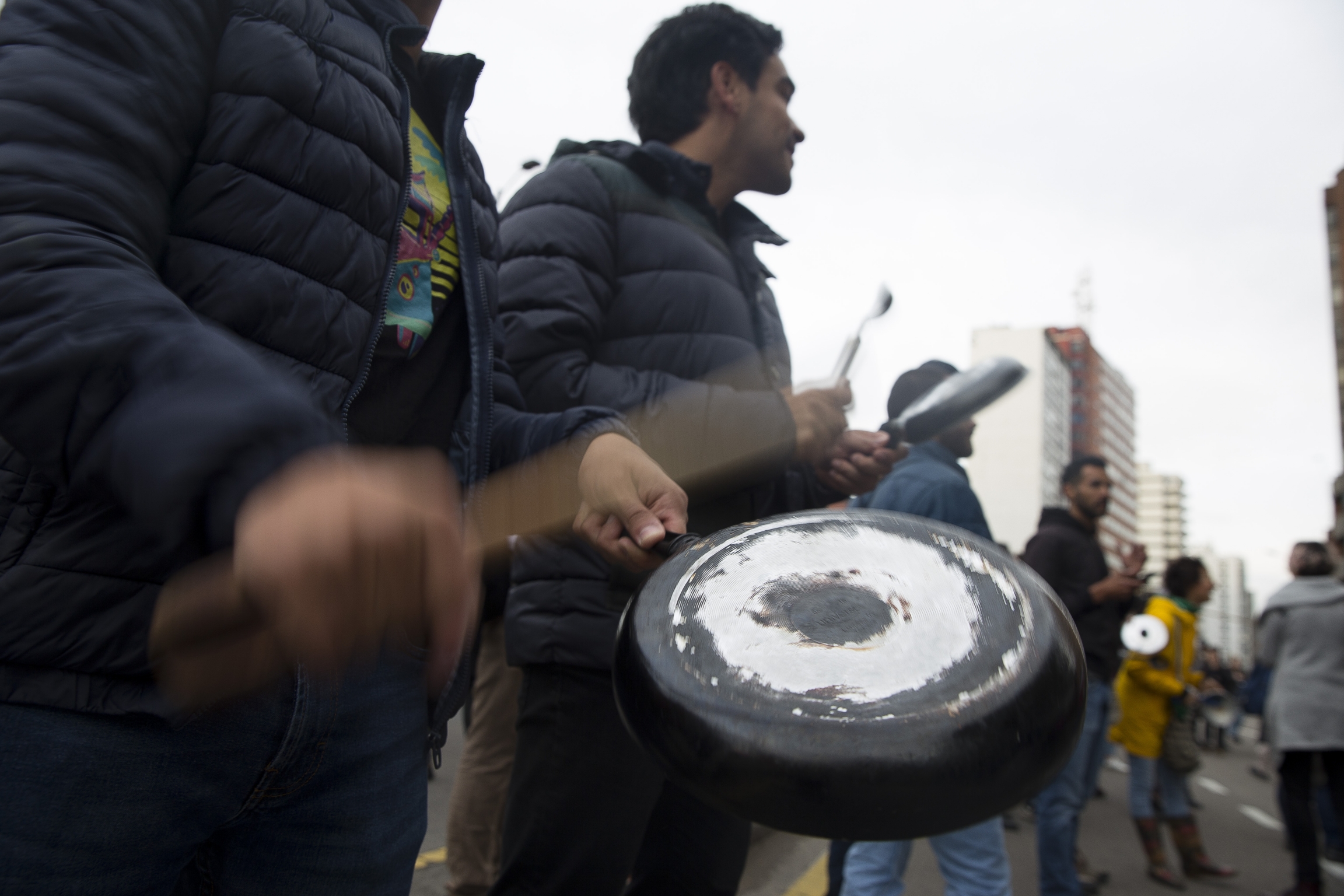 A history of noise-making as resistance

But the cacerolazo was a resistance strategy long before the echoes of pots and pans grew to become the peaceful outcry of Colombia’s protest.

The tradition emerged centuries before in the Middle Ages with charivari, also nicknamed “rough music,” — noisy parades used to shame men who married young women. The practice gained political significance in France, when people used kitchenware to protest against the monarchy, according to French historian Emmanuel Fureix.

The phenomenon faded away for nearly a century, popping up again in the mid-1900s when the Algerian paramilitary group, the Secret Army Organization, used pot banging during the Algerian Civil War as a form of resistance.

But the tradition of the cacerolazo began to take hold in Latin America in Chile during the administration of democratic socialist, Salvador Allende, when, during the 1971 “March of the Empty Pans,” protesters used empty pots to symbolize that they didn’t have enough food to feed their families. It resurged again in the 1980s during Augusto Pinochet’s military dictatorship, when people who feared violent military crackdowns participated in cacerolazos from their balconies.

From then on the tradition began to emerge across Latin America. “The cacerolazos were common in Latin America, more than anything during times in dictatorship,” said Ariel Avila, deputy director of the Colombia-based Peace and Reconciliation Foundation. “When the dictatorships wouldn't let the people march...the people would do the cacerolazos.”

In Argentina, banging pots decried economic crises. In Venezuela, facing corruption violent suppression by authoritarian leaders Hugo Chavez and Nicolás Maduro, noise-making was a key form of protest. In Puerto Rico, the cacerolazo was used to protest post-hurricane corruption and mismanagement by the government. And in the midst of more than a month of violent anti-government protests in Chile, the phenomenon has arisen once again in the Andean country.

“The cacerolazo has been used against so many dictators because many people were not marching. ... I think this is a criticism in the sense that they’re saying ‘I am scared to march because my safety isn't guaranteed, so I'm going to do it with my pan.’”

“The cacerolazo has been used against so many dictators because many people were not marching,” Avila said. “I think this is a criticism in the sense that they’re saying ‘I am scared to march because my safety isn't guaranteed, so I'm going to do it with my pan.’” 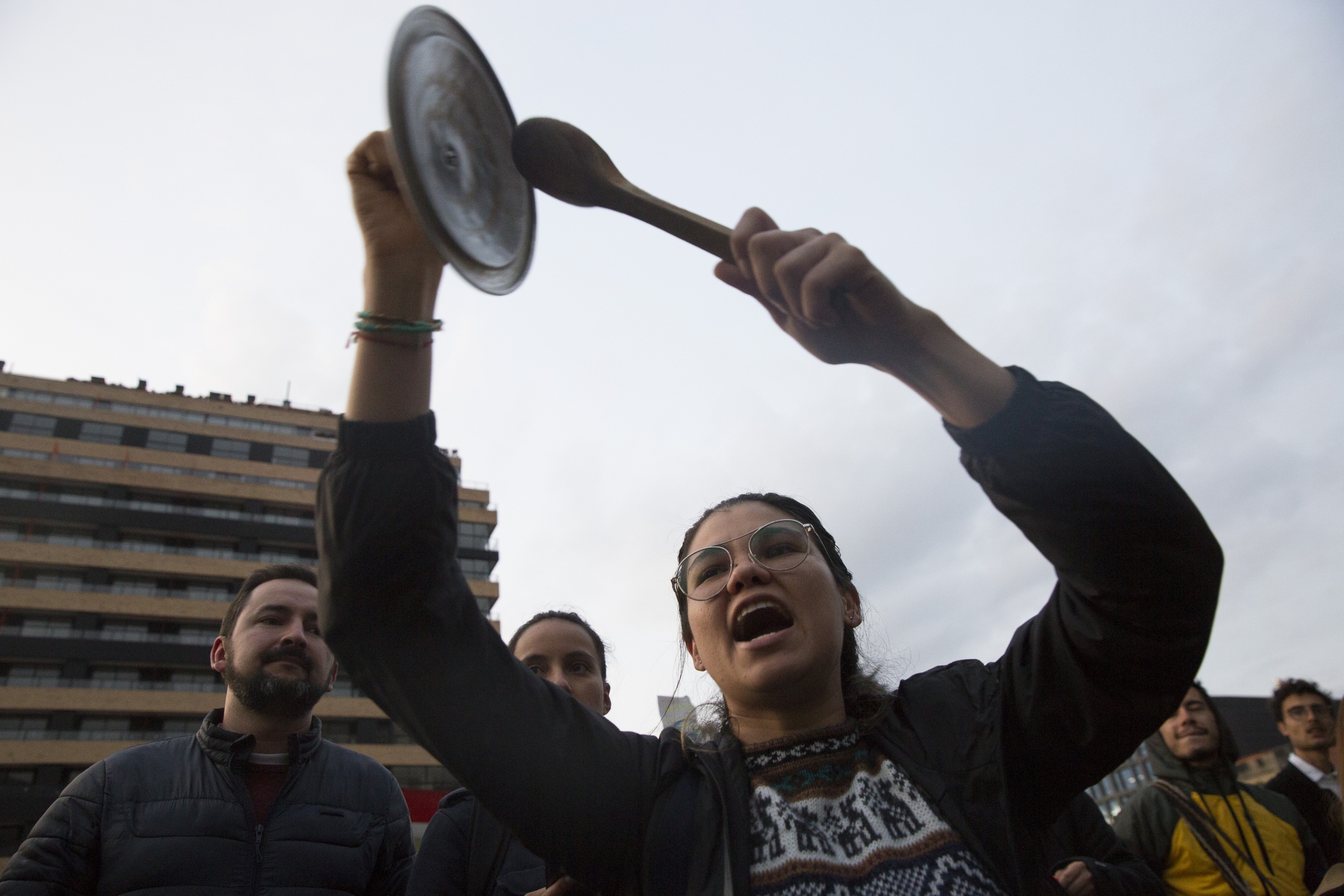 A protester bang pots in a cacerolazo in Bogotá, Colombia, to protest the country's government on Nov. 22, 2019.

As Colombia’s mass protests persist for a week, it’s that exact pot-banging that has become the fabric of the Paro Nacional, or National Strike, marches, one of the most important demonstrations in Colombia’s recent memory.

But the idea for a strike was compounded by deep unrest, stirred by government failures to implement the country’s peace process, an uptick in violence — especially against social and Indigenous leaders — and longtime systematic problems like economic inequality and education underfunding.

Already widely unpopular, the Duque government has also been plagued by a series of scandals, including the resignation of the defense minister after a bombing targeting guerrilla dissidents killed at least eight children and the massacre of an Indigenous community by armed groups in the conflict-ridden zone of Cauca.

After a rising wave of protests began to emerge across South America spurred on by everything from economic inequality to Indigenous rights, the problems that had been festering in Colombia for months, if not years, seemed to come to a head.

The largely peaceful demonstrations turned violent on the first day of the strike on Nov. 21, when riot police tear-gassed masses gathered in Bogotá's city center of Plaza Bolivar. The situation devolved into clashes between police and protesters.

The pots, said Avila, are key among more repressive protests because they allow normal citizens to participate from their balconies and have their voices heard without wandering into dangerous situations. 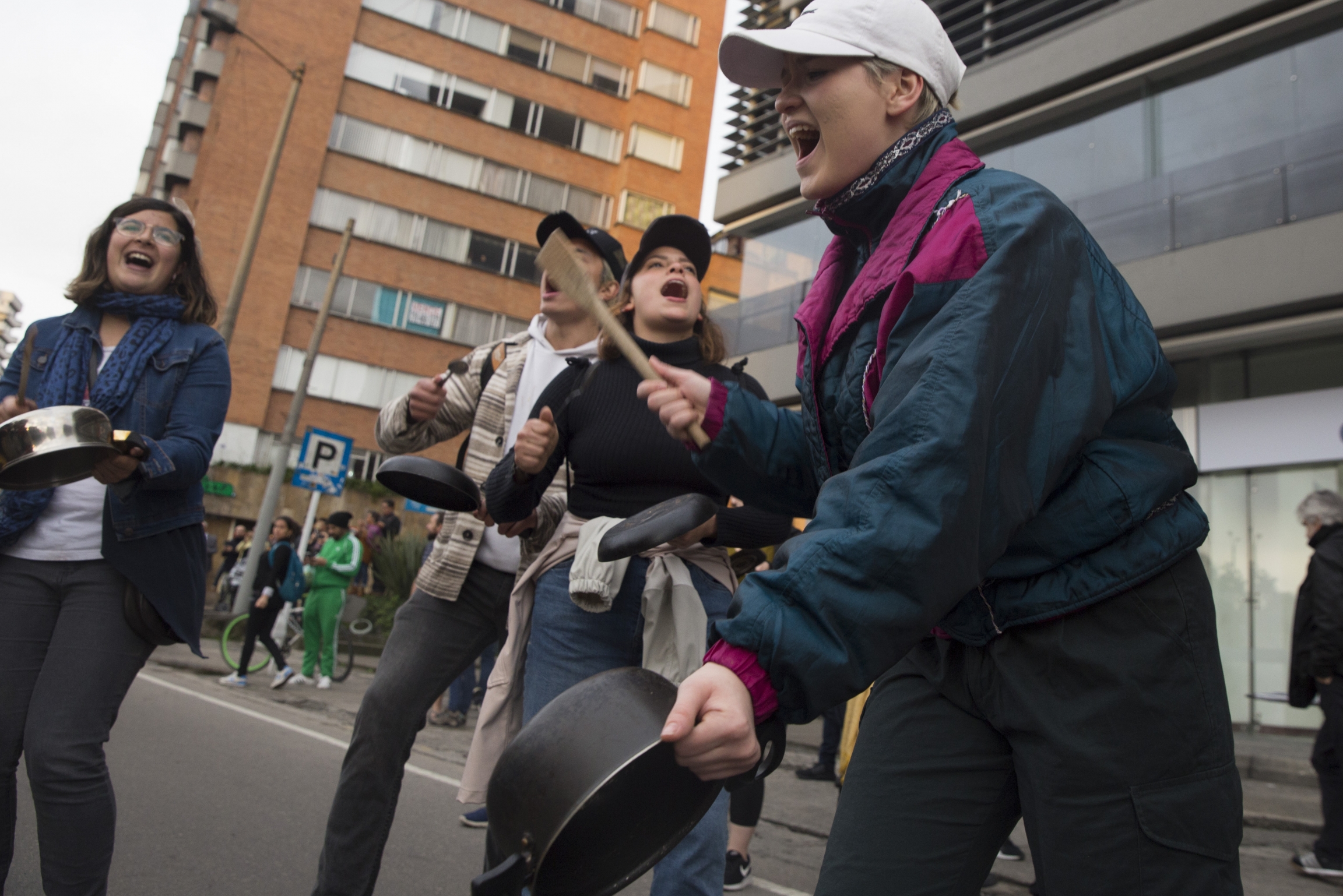 Protesters bang pots in a cacerolazo in Bogotá, Colombia, to protest the country's government on Nov. 22, 2019.

And for 52-year-old marcher Constanza Vasquez, it was the cacerolazo that seemed to be a distinguishing factor for the national protests and others in Duque’s 15 months in office, which often fizzle out after a day.

“It's a continuity of this organized call for the Paro Nacional,” she said. “The cacerolazo like this, it's something spontaneous.”

It was that spontaneity that seemed to give the movement its own voice that could potentially permanently shift Colombia, where the peace process after 50 years of civil conflict has stalled under the Duque government. 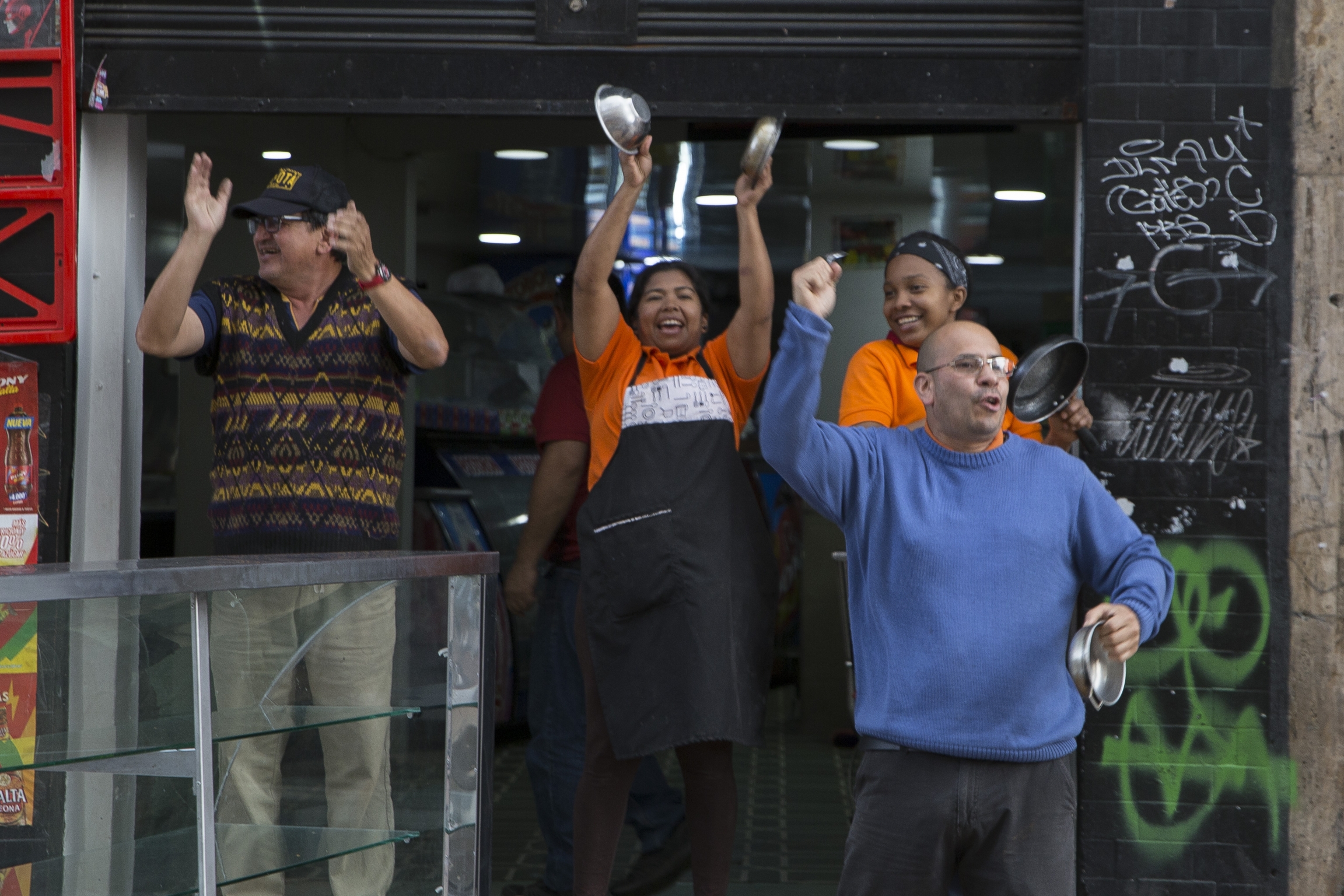 Workers in a restaurant bang pots to support masses of protesters passing by in a cacerolazo in Bogotá, Colombia, to oppose the country's government on Nov. 24, 2019.

Already, the movement has sparked a response from Duque, who Sunday night announced a national dialogue to address six key concerns of protesters: economic inequality, corruption, zones most affected by the armed conflict, education, the environment and the strengthening of government institutions.

Still, many doubt that the government will make significant changes based on the talks.

As Vasquez tapped her kitchenware among the masses, the roar of cumulated banging metals floated over her neighborhood of Chapinero. She said it was an ambiance she’d never experienced before.

“I have the top of an egg pan and a fork and I will be here until the protest, the group, dissolves,” she said,” carrying a small pan top the size of a saucer. “It's part of what I can do because I have to express what I believe.”