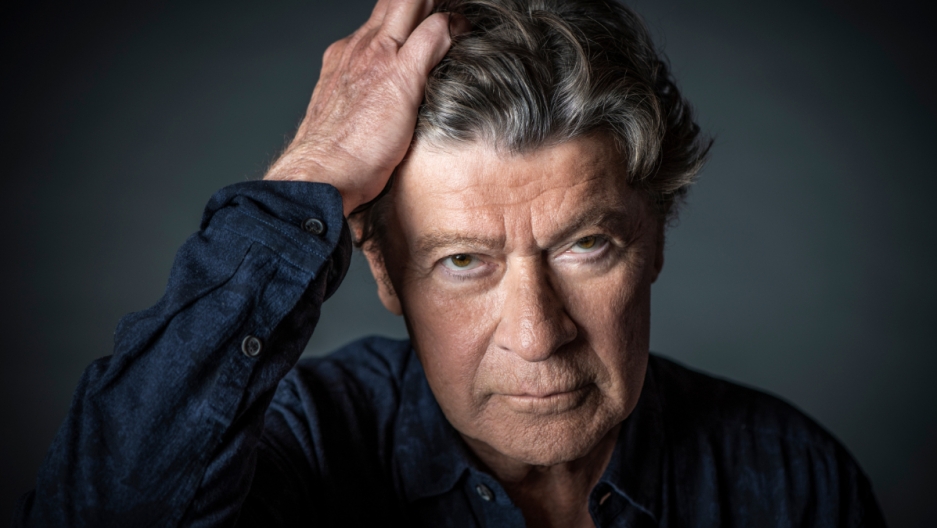 "Up on Cripple Creek" and "The Night They Drove Old Dixie Down" are all-American tunes from the mostly Canadian band, The Band.

The Band and its original lineup stopped touring in 1976 with a Thanksgiving concert in San Francisco that would go down in history as "The Last Waltz."

Legendary musician Robbie Robertson, a founding member of The Band, its lead guitarist and songwriter, will be a special guest Saturday, Nov. 23 in Nashville for a commemoration of The Band's historical farewell concert.

Last September, Robertson, 76, who was born in Toronto, accepted a golden key to his birth city ahead of the premiere of a documentary celebrating his career called "Once Were Brothers."

“It was such a sweet gesture,” Robertson said. “Whenever it's your 'hood, you're home. You kind of feel a little bit of pride with that. It was a very, very nice feeling.”

Robertson spoke to The World’s Marco Werman about his music, his memoir and his new album, "Sinematic."

Marco Werman: When you were on that train traveling out of Toronto to the States—your destination was Arkansas—you got on the train heading south, and you were off to audition as the guitarist for Ronnie Hawkins and the Hawks, the band that would later become The Band. You write that you were unable to sleep on a train, this is all too new to unimaginable, you write, "too dreamlike, because it occurred to me, people from my background hardly knew how to dream." Why did your background make it hard for you to dream about what you really wanted in life?

Robbie Robertson: In some ways, being from Canada, the United States seemed like it was the center of the universe, and Canada wasn't. And so there was always a bit of that. And growing up saying, "One of these days, I'm going to go out in the world and I'm going to write music and I'm going to play music and I'm going to perform everywhere." and most people looked at me like I was just a dreamer, [like] I was just going to get my heartbroken. And on my new album, "Sinematic," there's a song called "Dead End Kid" that completely refers to this period [of time] when people said to me, "That doesn't happen for people like us, and you're going to be very disappointed." I was like, "I can't hear you. I am on a mission."

"Dead End kid," the song, it gets right at your upbringing, and like a lot of your music, there's a story there. Do you consider yourself a storyteller? Is it easier to write about, say, Robert E. Lee or the W.S. Walcott Medicine Show, which you have, than it is to write about yourself?

I do consider myself a storyteller, and I learned that at the Six Nations Indian reserve. I witnessed elders [who] told stories that just went right deep into my soul. I thought, "When I grow up one of these days, I want to be able to do that." Now that I don't have the guys of The Band with me, I have to share stories. When I was working with them, I was really writing songs for them to sing about stories that I wanted to tell. But I was casting them as the singers, as the voices of the story that I wanted to tell.

In addition to your memoir from 2016 and your new album, "Sinematic," there's a new documentary out about the band. It's called, "Once Were Brothers." There's also a song on your new album called "Once Were Brothers." Both the song and the documentary are about your former bandmates — three of them, Richard Manuel, Rick Danko and Levon Helm — are gone. But you've had so many different people over the years who you must consider brothers. And I suspect they also come and go. Perhaps not as permanently as Richard and Rick and Levon. Now that you're 76, how long has this song been fermenting inside you?

Being part of this brotherhood with these guys in "The Band," what a special relationship we had. And in this song, "Once Were Brothers," it came out of me because we were working on this documentary, and I was going back and remembering some of the extraordinary experiences that we had together.

We were talking a moment ago about songs that are stories and I think of ‘The Weight,’ one of your legacy story song compositions. There's a recent rendition of 'The Weight' with the rotating cast of musicians from this group [called] 'Playing for Change.' You open the song with a guitar intro and then we hear from this international lineup of artists from Congo, Bahrain, Japan, Nepal, Jamaica, Ringo Starr is on drums. It's a very cool rendition. Why did you want to do the playing for change treatment? And were you pleased with what you heard at the end?

Well, this was my son Sebastian's idea. I was just following his lead on this. And then, everybody joined in globally, around the world. And in these times, that's a great feeling. We like the idea of embracing one another and from around the world, being able to join together on this song, I love it.