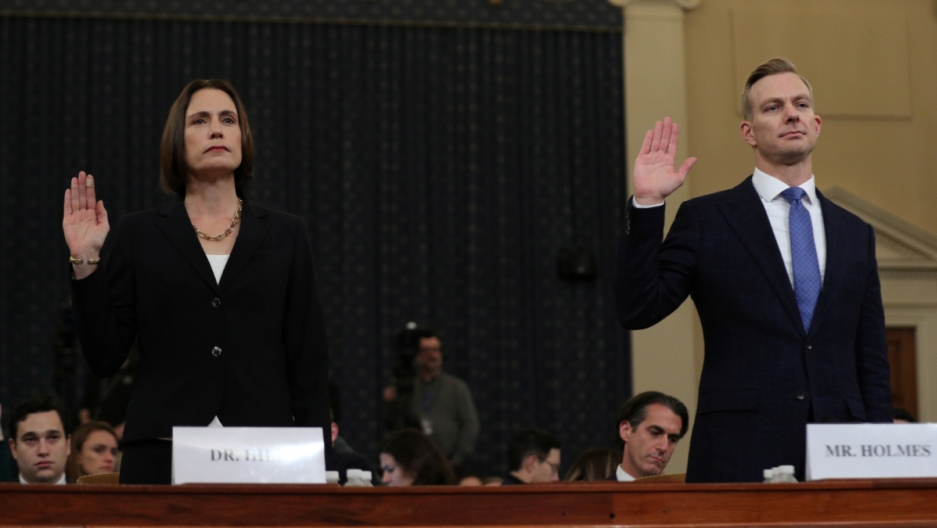 Fiona Hill and David Holmes take the oath before testifying in the impeachment inquiry on Capitol Hill on Nov. 21, 2019

The fifth day of public hearings in the presidential impeachment inquiry wrapped up today in the House.

The House Intelligence Committee heard testimony from Fiona Hill, former senior director for Europe and Russia on the National Security Council, and David Holmes, political counselor at the US Embassy in Kyiv, Ukraine.

Hill said based on their questions and statements, some members of the panel appear to believe that Ukraine, rather than Russia and its security services, conducted a campaign against the United States during the 2016 presidential race.

Some Republican members of the Democratic-led committee have advanced this discredited theory, which has been embraced by US President Donald Trump and his political allies.

"This is a fictional narrative that has been perpetrated and propagated by the Russian security services themselves," Hill told the committee.

Holmes testified about a July 26 phone call in which he said he overheard Trump ask Gordon Sondland, US ambassador to the European Union, about the status of the investigations into his political opponent, former vice president Joe Biden, a Democrat. Holmes said he heard Trump's voice on the call at a Kyiv restaurant.

The World’s Matthew Bell speaks to host Marco Werman about what the day’s hearing revealed — and what it all means.