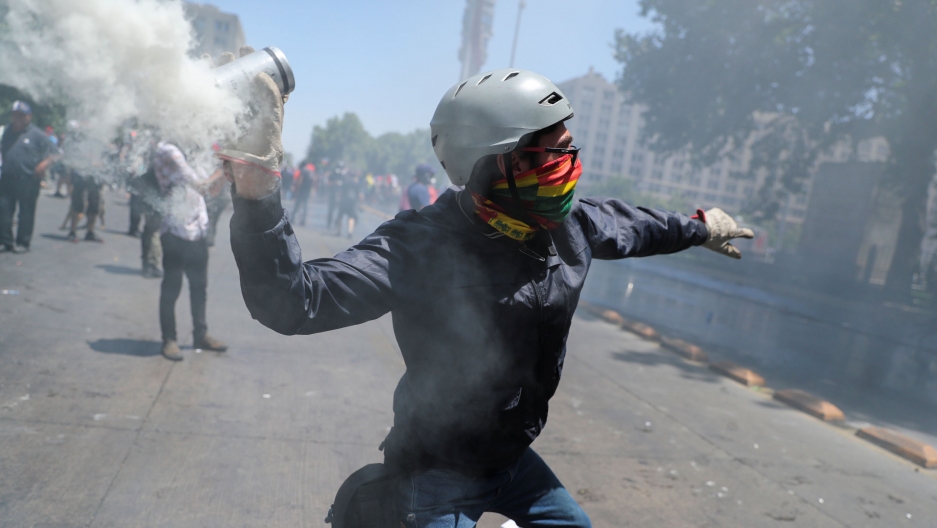 A demonstrator throws back a tear gas canister during a protest against Chile's government in Santiago, Chile, on Nov. 12, 2019.

Numerous anti-government protests have paralyzed cities across the globe for months, from La Paz, Bolivia, to Santiago, Chile, and Monrovia, Liberia, to Beirut.

Each protest in this worldwide wave of unrest has its own local dynamic and cause. But they also share certain characteristics: Fed up with rising inequality, corruption and slow economic growth, angry citizens worldwide are demanding an end to corruption and the restoration of a democratic rule of law.

It is no accident, as Foreign Affairs recently observed, that Latin America — which has seen the most countries explode into the longest-lasting violent protests — has the slowest regional growth in the world, with only 0.2% expected in 2019. Latin America is also the world’s region with the most inequality.

Bolivia’s once-powerful president, Evo Morales — whose support was strongest in rural areas — was forced out on Nov. 11 by a military response to mass urban unrest after alleged electoral fraud.

One under-covered factor in these demonstrations, I would observe as a scholar of migration, is domestic, rural-to-urban migration. All these capital cities gripped by protest have huge populations of desperately poor formerly rural people pushed out of the countryside and into the city by climate change, national policies that hurt small farmers or a global trade system that impoverishes local agriculture.

Cities worldwide have been growing at an unsustainable pace over the past seven decades.

In 1950, the New York metropolitan area and Tokyo were the world’s only megacities — cities with more than 10 million people. By 1995, 14 megacities had emerged. Today, there are 25. Of the 7.6 billion people in the world, 4.2 billion, or 55%, live in cities and other urban settlements. Another 2.5 billion people will move into cities in poor countries by 2050, according to the United Nations.

Most modern megacities are in the developing regions of Africa, Asia and Latin America. There, natural population increases in cities are aggravated by surges in rural migrants in search of a better life.

What they find, instead, are sprawling informal settlements, frequently called urban slums.

These marginalized parts of cities in the developing world — called “favelas” in Brazil, “bidonvilles” in Haiti and “villas miserias” in Argentina — look remarkably similar across the globe. Ignored by the municipal government, they usually lack sanitation, clean drinking water, electricity, health care facilities and schools. Informal urban settlements are usually precariously located, near flood-prone waterfronts or on steep, unstable mountainsides.

Their economy and, to a significant degree, politics, are infiltrated by gangs — organized crime groups that profit off the illegal trafficking of drugs, people and weapons. These gangs, in turn, may be linked to political parties, serving as their armed enforcers.

Many rural migrants, who lack identity documentation, social entitlements, housing and financial services, are forced to work in these illicit labor markets.

This system replicates in a predatory, illegal form the patron-client relationship still common in many developing countries, in which a rural economic elite provides employment, loans, seeds, cash or protection for farmers in exchange for “taxes” — usually a share of the farmer’s produce — and political fealty.

In the unstable market economy of the urban slum, gangs are the patron.

A staging ground for discontent

The injustices of this daily life underlie the anger of many of today’s protesters. From Quito, Ecuador, to Beirut, the extreme marginalization of so many people living in big, dysfunctional and dangerous places has boiled over into deadly unrest.

In Haiti, for example, the majority of demonstrators who’ve staged nine straight weeks of massive protests against documented official corruption, gasoline shortages and food scarcity are extremely poor Port-au-Prince residents. They are highly motivated to keep protesting because they are facing starvation.

Even Chile, which technically is the wealthiest Latin American country, has an awful lot of very poor people struggling to get by. Its current protests, which began in mid-October with a hike in the Santiago subway fare, are disproportionately composed of youth and rural migrants from Santiago’s poor outskirts. Among Latin American countries, Chile has the second-highest rate of internal migration in all of Latin America, second only to Panama. Bolivia ranks fifth in the region.

It is not the actual movement of rural people into cities that creates social upheaval, according to a 2015 analysis of 20 years of data on internal migration, poverty and inequality for 34 cities in Africa and Asia. Rather, it’s the overall poor and unequal educational and housing opportunities that rural-to-urban migrants face in cities — coupled with their socioeconomic marginalization — that spurs urban discontent.

People who fled impoverished countryside only to find poverty in the city, too, are demanding more. Two centuries after the peasant rebellions that toppled monarchies across Europe, cities have become the stage for the kind of resentment and frustration that can destabilize entire nations.