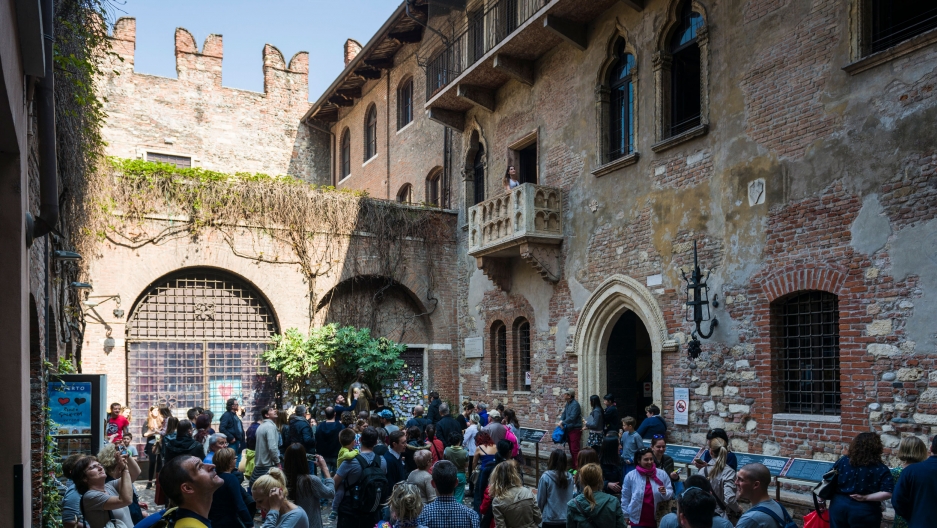 The backyard of Juliet's house in Verona with the famous balcony full of tourists.

Verona, Italy, is filled with references to Romeo and Juliet, the city’s most famous literary residents. Tourists can pretend to be Juliet by standing on the balcony at what is said to be her 14th-century house.

They can also write Juliet a letter. Each year, tens of thousands of people do, asking for advice on life and love.

They may be surprised to learn Juliet writes back.

The personalized responses come from volunteers with the Juliet Club. Their work began decades ago as a group of friends answering letters to Juliet, one of the "star-cross'd lovers" in William Shakespeare’s play who fatally stabbed herself when she could not marry Romeo. The letters have grown into a worldwide phenomenon.

“The letters started arriving in Verona maybe 100 years ago. So it’s a long tradition that belongs to the story of the city,” said Giovanna Tamassia, manager of the Juliet Club.

People can send letters by traditional mail, email, or by dropping a letter in Juliet’s mailbox at her house in Verona.

“If you think, ‘Who writes to Juliet? Who takes the pen and writes to someone they don’t know?’ It can sound crazy,” Tamassia said. “But if you read the letters, you discover it’s not crazy. It has a meaning.”

Letters to Juliet come from around the world and are written by people of all ages.

When the letters finally make it to the club’s modest office in Verona, they are sorted by language. Tamassia said some people write in looking for advice on love, while some simply want to express their emotions.

“We can see in these letters that [this opportunity] is a really unique thing. It’s not like writing to a doctor or a psychologist or someone you know,” Tamassia said. “They don’t know who will read the letter [or] who will answer. It’s like writing to yourself, in a way. Writing is a therapy.”

"It’s like writing to yourself, in a way. Writing is a therapy."

Juliet’s secretaries, as they’re called, respond to letters every day during the club’s limited hours of operation. A few remote secretaries in the United States, England, and Moscow reply to the email messages, but most letters are answered from Romeo and Juliet’s home city of Verona.

An influx of Americans began volunteering as secretaries after a 2010 movie starring Amanda Seyfried called “Letters to Juliet” popularized the club.

Donna Curin, who lives in Chicago, Illinois, said she was curious about the club after seeing the movie. She visited Verona after retiring in 2018.

“I really wanted to see if it was true,” Curin said. “The movie portrayed it pretty seriously. And I thought, ‘What an unusual concept.’”

Upon arriving, Curin was surprised to learn the letters were “not like writing to Santa.”

“The letters themselves are what blew me away. They were from all over — from Russia, Poland, California, Louisiana, Michigan, New Jersey. All of them were on decorated stationery. I mean, these were not just whipped out on note paper,” Curin said. “One was 12 pages long.”

Curin also found an unexpectedly large range of people to be writing in.

“I thought they were going to be 14-year-old kids. They weren’t. One was from a man. One was about a same-sex relationship,” she said. “They were all so genuine.”

Curin — a mother of four and grandmother of three — said reading the letters made her emotional. According to Tamassia, this is a typical response.

“When people come to reply, it’s very heartfelt. They feel like [they are] in a mission of love. In the name of Juliet,” Tamassia said. “They try to, of course, give what they can.”

“It’s like seeing in the hearts of many people."

“It’s like seeing in the hearts of many people,” Tamassia continued. “We try to give help or support or friendship. But we also receive a lot when we have the chance to read others’ lives, others’ experiences. It opens your mind to different kinds of love.”

There are no standard replies to the letters Juliet receives, Tamassia said, and it takes secretaries 30 to 60 minutes to craft each thoughtful response.

Only one aspect of the letters is standardized: they’re all signed, “All my love, Juliet.”

I wrote a letter to Juliet in Verona and she wrote back 😭 pic.twitter.com/k9pJ62uPnJ

Lena Sibony said those personal touches don’t go unnoticed. Sibony, a junior at the University of California, Los Angeles, put a letter to Juliet in Juliet’s mailbox while in Verona on a family vacation.

“I 100% didn’t think I was going to get anything back,” Sibony said. “You kind of think of it like throwing a penny into a fountain — it’s just a nice idea. You don’t expect return.”

But, as promised by the Juliet Club, Sibony did get a reply. It arrived in her family’s mailbox while she was away at college.

“I went home and was opening this letter and was like, ‘Wait. What?’” Sibony said. “I got back this very meaningful, personal response and was really touched. In a silly way, it really felt like a moment of humanity, of somebody really taking the time to be careful and to be kind and sweet to somebody young and hopeful.”

As the Juliet Club nears its 50th anniversary, Tamassia said there is no plan to close the doors anytime soon.

“It’s a job I have because I love it,” she said. “It started as a passion but maybe, now, I can’t stop because the letters continue and continue to arrive.”

The doors also remain open, in part, due to donations. A local bank pays for the office space and the city of Verona pays for the stamps.

“The letters are really like a treasure. So many love stories in all languages from every corner of the world,” Tamassia said. “There isn’t anything else that can be compared.”

Instructions for writing a letter to Juliet can be found on the Juliet Club’s website.