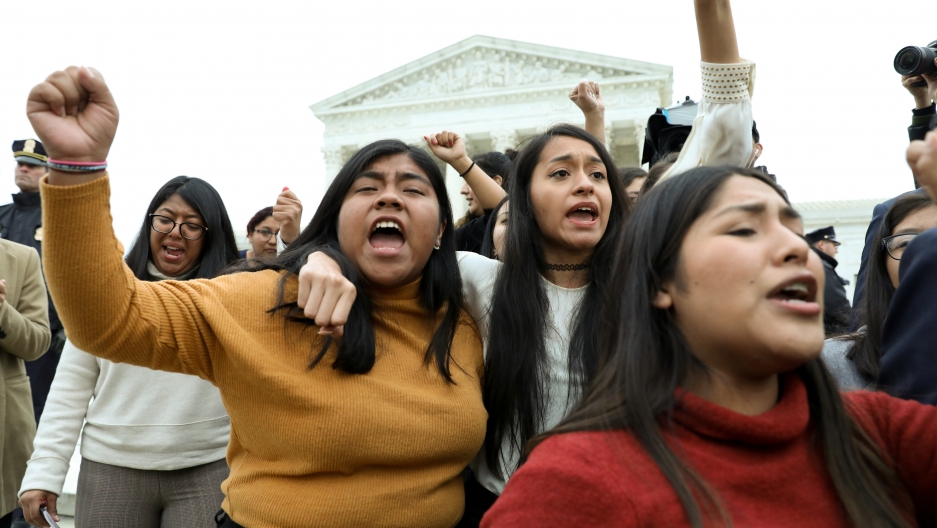 DACA plaintiffs walk arm-in-arm down from the US Supreme Court after justices heard oral arguments in the consolidation of three cases before the court regarding the Trump administration’s bid to end the Deferred Action for Childhood Arrivals program in Washington, D.C., on Nov. 12, 2019.

The US Supreme Court on Tuesday heard oral arguments that will determine the fate of Deferred Action for Childhood Arrivals, or DACA, the Obama-era program for undocumented young people that the Trump administration canceled in 2017.

During the 80-minute hearing, the justices and lawyers raised many questions about the program's legality. A decision is due out by next June.

Muzaffar Chishti directs the New York office of the Migration Policy Institute, a think tank. He spoke to The World's Marco Werman on the legal arguments each side presented Monday — and what could happen for DACA recipients depending on how the court rules.

Marco Werman: Should the court have heard this case?

Muzaffar Chishti: Well, I think what almost everyone agreed on today, which was I think quite interesting, is that the president has the authority to end the program. I think there was a lot of disagreement about whether he ended it lawfully and in an appropriate way. This is a large program affecting a large class of people, upending the lives of close to 800,000 DACA kids. And therefore, it should not be done lightly.

I noticed that one of the critiques that a lot of opponents of DACA have raised is they say they have an issue with the program because it's unconstitutional, that it was set up by Barack Obama in 2012, allegedly with no input from the public. Is that a fair argument?

Well, that's exactly what led to the strange contradiction in the administration's position. Their first argument was, "Look, there's nothing to review. This is a policy decision by the administration." But then they proceeded to say that the reason we're ending it, because the program was illegal from the very beginning, is because we disagreed with the legality of the program that the Obama administration put in place. That's a bit of a contradiction, because once it was said that this was because of a legal reason, but not a policy reason, that you are ending it, that makes it able for review.

President Donald Trump tweeted that most people who are protected by DACA are not angels, but very tough, hardened criminals. What do you make of that?

Well, it's a complete reversal of the president's position on the DACA kids. In fact, a related point was raised today in the Supreme Court by Justice Sotomayor, who said, well, looked into the DACA people, who had come to rely on the president's statements about them because he had said very complimentary things about DACA kids in the past — that there is no way we're going to remove you from the country. A large number of kids who are so educated, who are contributing to society. So this is a complete reversal of that sentiment.

And it seems like this is a post-facto justification to end the program, which is what makes the explanations of the administration sort of kind of contradictory.

What if the court sides with the White House? What would happen if more than 700,000 people suddenly lost their DACA status — so they would become deportable and they would lose their work authorization?

It's been the view of many of us that the DACA program has been a classic case where all three branches of the government have played ping-pong with each other, where they have hope that the other branch would bail them out.

Yeah, it strikes me, Congress would really have to address a broken immigration system — which, they've been trying to pass comprehensive immigration reform for years, at least since George W. Bush was in office. Do you see DACA as part of a piecemeal approach that is, in fact, justifiable in the medium term until immigration reform happens?

That's a really good question. The interesting thing is that if the court decides to terminate DACA, then Congress will have to deal with it. That decision will come smack in the middle of a very polarized election campaign. But Congress may have no choice but to deal with it because of the equities of the Dreamers. And therefore, the question is, will something like DACA provide this rare opportunity to end the logjam that has characterized the immigration debate for the last 20 years?