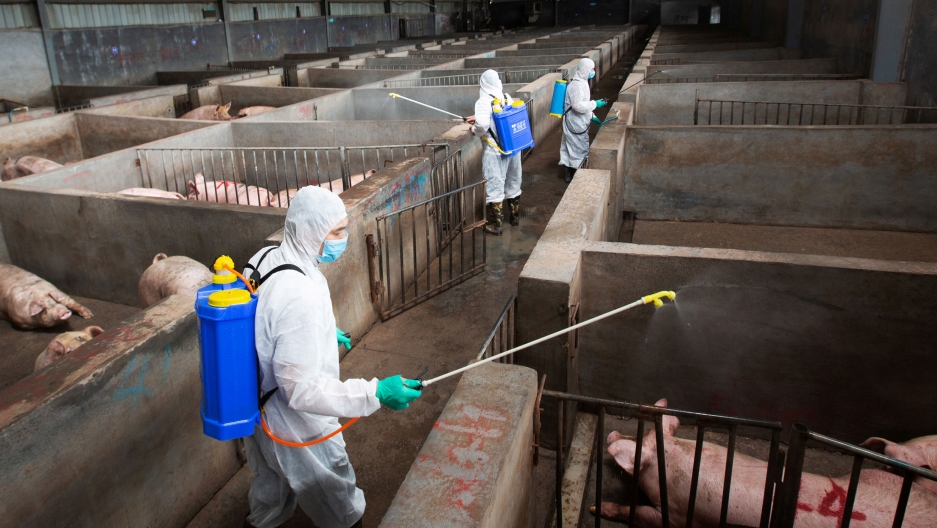 Local husbandry and veterinary bureau workers in protective suits disinfect a pig farm as a prevention measure for African swine fever, in Jinhua, Zhejiang province, in August 2018. The UN says China has reported at least two million pigs have died as a result of African swine fever in China alone.

The huge profits underline how the fatal pig disease, which has killed millions of hogs across Asia and left many small farmers bankrupt, has proved a major opportunity for the leading producers in the world's largest but highly fragmented hog sector.

For large producers, even if they lost some sows to the disease, prices are so high now that they are still earning much more than before.

Now, the disease is spreading across Asia. South Korea is deploying snipers and drones to kill boars.

Dr. Wantanee Kalpravidh, the United Nations' head of emergency work on animal diseases in Asia, spoke to The World's Carol Hills about the threat posed by the disease.

Carol Hills: Why is the African swine fever such a big threat?

Dr. Wantanee Kalpravidh: This African swine fever is a viral disease that can infect domestic pigs and also wild boar, and it can cause up to 100% case fatality. And because this virus is quite stable, it can survive a long time. If the wild boar die of this disease, that carcass, even though it's rotten, it still carries the virus and can pass on to the domestic pigs.

That disease can come in from so many means, including people. Human beings can carry the virus from our clothes, from our body. Flies can also be one of the means of virus transmission. So it is challenging in terms of the best security.

And just to be clear, the African swine fever is something that can be spread among animals, but not to humans. Is that correct?

Correct. There is no public health threat. 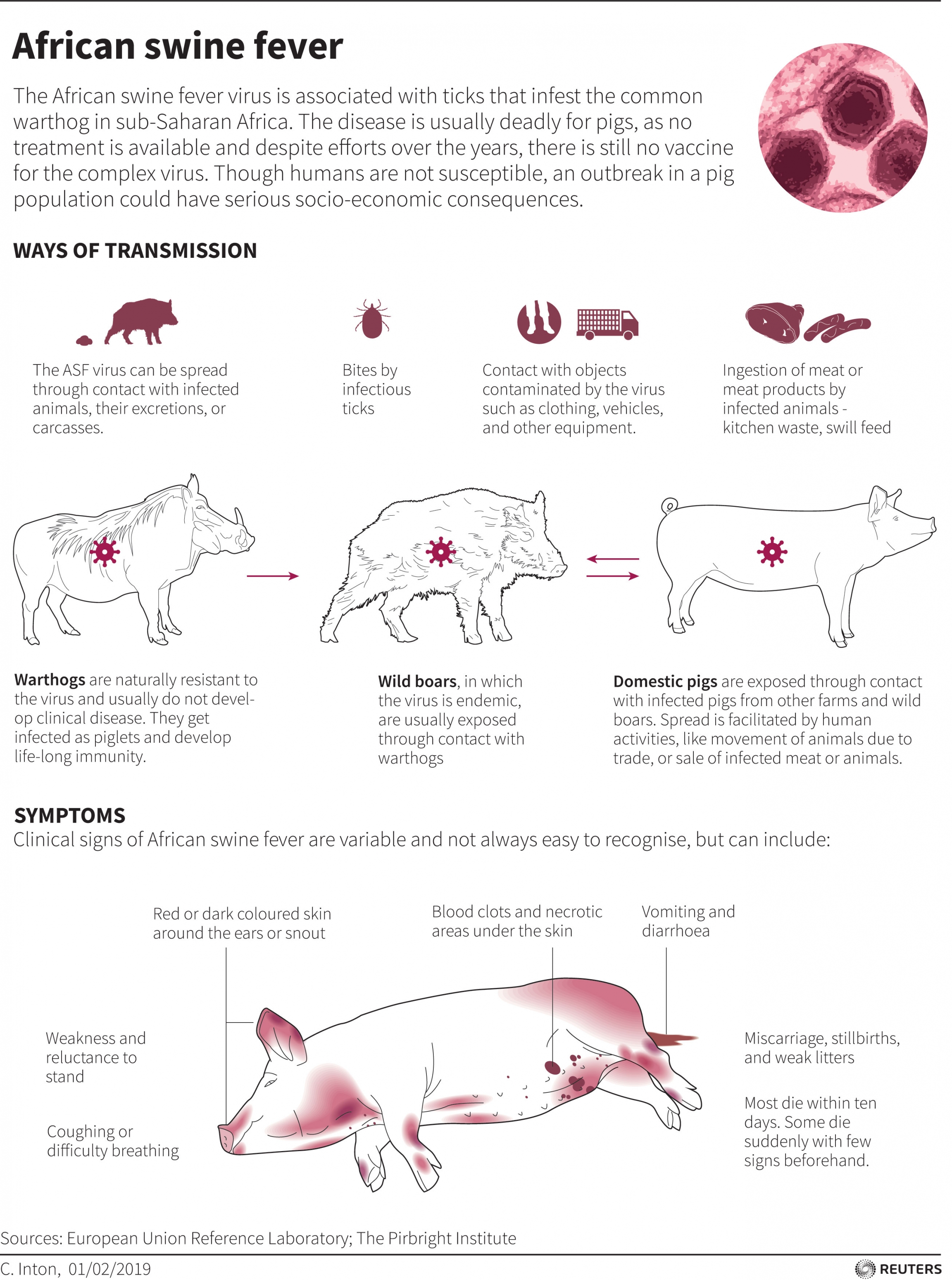 Now, already South Korean pig farmers have had to euthanize many of their pigs. Isn't that correct?

Yes, because we do not have an effective vaccine or an effective treatment yet. So the recommendation if the disease gets into the country is slaughtering the infected pigs in order to contain the outbreaks.

Is the use of snipers and drones — is this a first in terms of focusing on animals carrying disease or has this been used before?

China is a country that's been enormously affected. How many pigs have had to be slaughtered or euthanized in China because of the African swine fever outbreak?

Wow. So maybe even many more pigs. China is a huge consumer of pork, and I understand that it's now importing a lot of pork because its local production is down. How serious is this African swine fever in terms of the overall pig population?

China is the No. 1 big production country. Vietnam is the No. 5. From Vietnam alone, the figure that they report is almost six million pigs. For China, even though the formal figure is only two million, we believe that the production of pigs has been going down [as much as] 50%. So in this case, the pig supply would be reduced by half from Asia and we have seen already that pork prices have been increased and this would have an impact on the food security for sure.

At this point, how many countries around the world have been affected by African swine fever?

Well, the majority of the countries in Africa, several countries in Eastern Europe, and in Asia alone, 10 countries reported the disease. 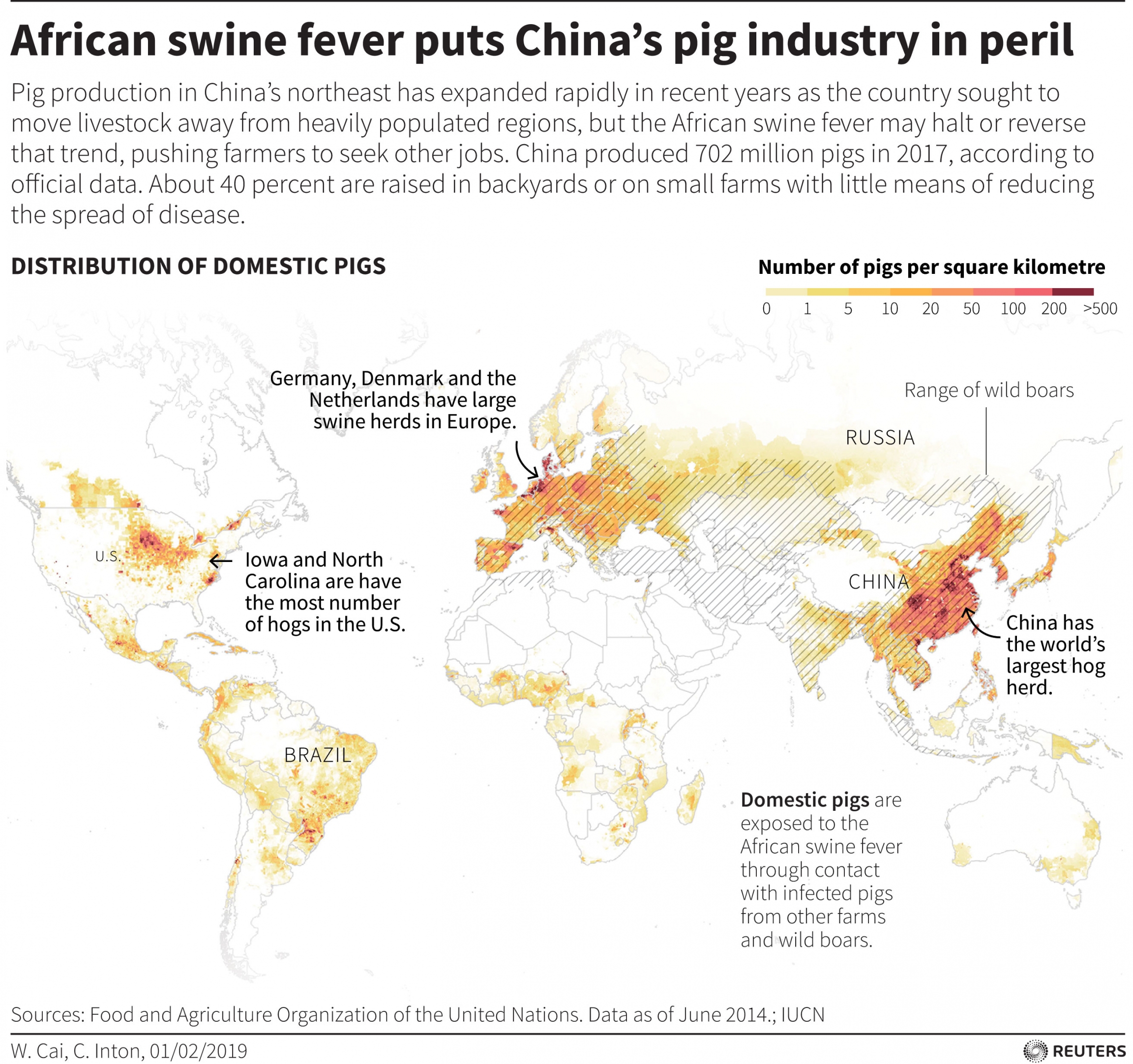 Is there any hope of a vaccine?

Several groups of scientists are saying that it is promising, but it has to go through experiment in the field before it can be commercially available. It will be at least about two years. That's what scientists estimate.