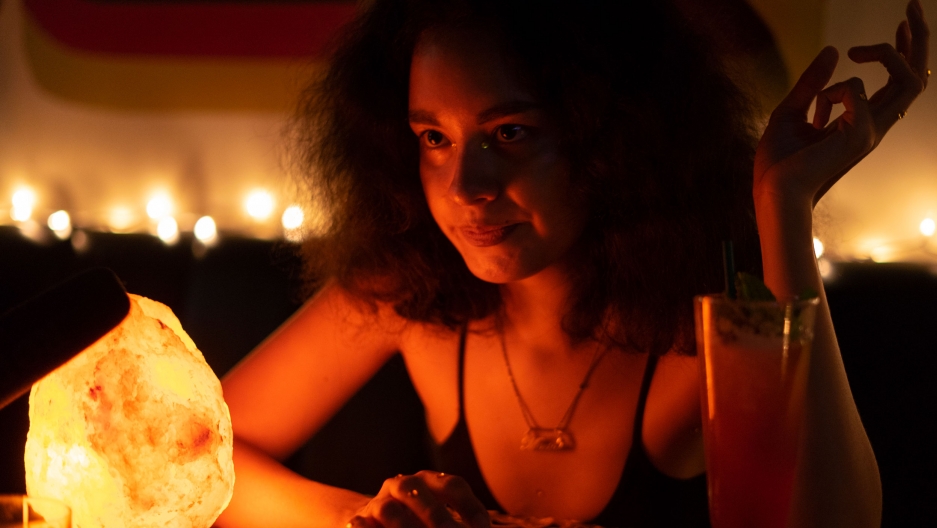 Maria Manrique, who goes by Bruja Caribe, gives a Tarot card reading at Mama Tried in September. She is one of several spiritual practitioners who have joined Eleventh House, a directory of Miami mystics.

Maria Manrique shuffles her tarot card deck at Mama Tried, a dim, disco-themed bar in downtown Miami. Her table, draped with a velvet and gold-lace cloth (the kind of design that you'd expect from a fortune teller), and bathed in the warm orange glow of a crystal lamp, casts a soothing aura over the chaos of informal conversations and loud music.

Manrique, 25, who goes by Bruja Caribe (roughly “Caribbean Witch” in Spanish), is reading someone’s past, present and future with her cards. She’s drawn one called the Queen of Pentacles, which is considered a good omen related to the material world. 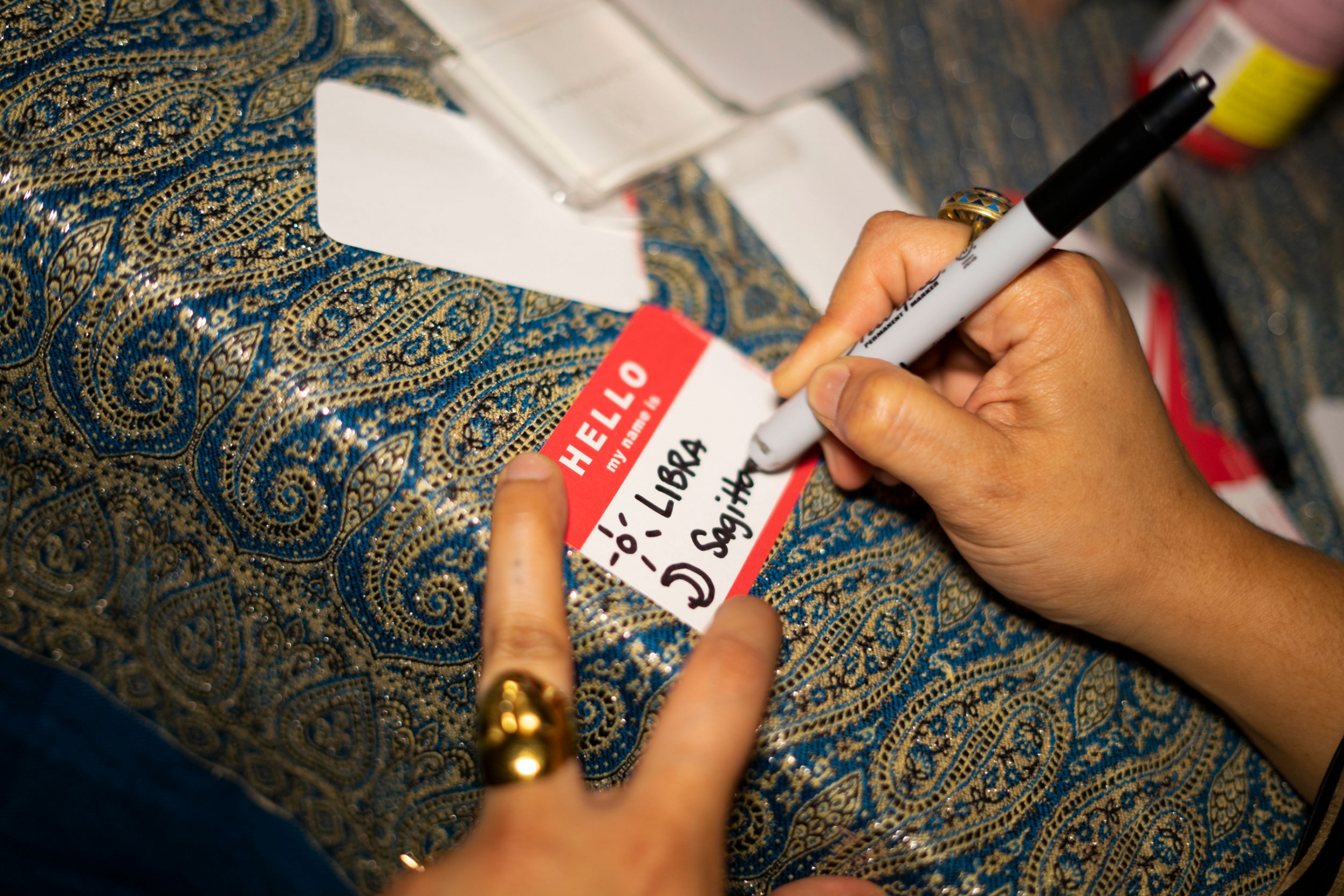 They then banter about being Libras. Spiritual folk and newcomers alike are wearing name tags with their rising sun and moon signs — the equivalent of asking for preferred pronouns in this circle of practitioners who want Muggles like you to momentarily access the divine.

“And in the future, you have to have duality. If you don’t have duality, we cannot exist,” Manrique says. And the reading continues.

Manrique is one of several spiritual practitioners — tarot card readers, astrologists and oracles — who offer their services once a month at the bar. They’ve all recently come together in a new coven of sorts, Eleventh House, an online directory of Miami mystics.

The group, whose name is a reference to the astrological house associated with community and friendship, runs the monthly tarot party, in part, to break the stigma of occult practices and honor their place in Miami’s religious culture.

“[We're] coming into mysticism from the angle of, like, changing the tone, just being real, in a place that’s called the Magic City,” said Angel Garcia, 29, who co-founded Eleventh House.

Brujería, or "witchcraft," has long been considered a taboo in many Latin American countries. Newer generations of South Florida brujas, like Manrique, are deciding to openly embrace this spiritual ancestry and come out of the so-called "bruja closet." They aren't alone. More than one million people in the US identify as Wiccans or have pagan beliefs. 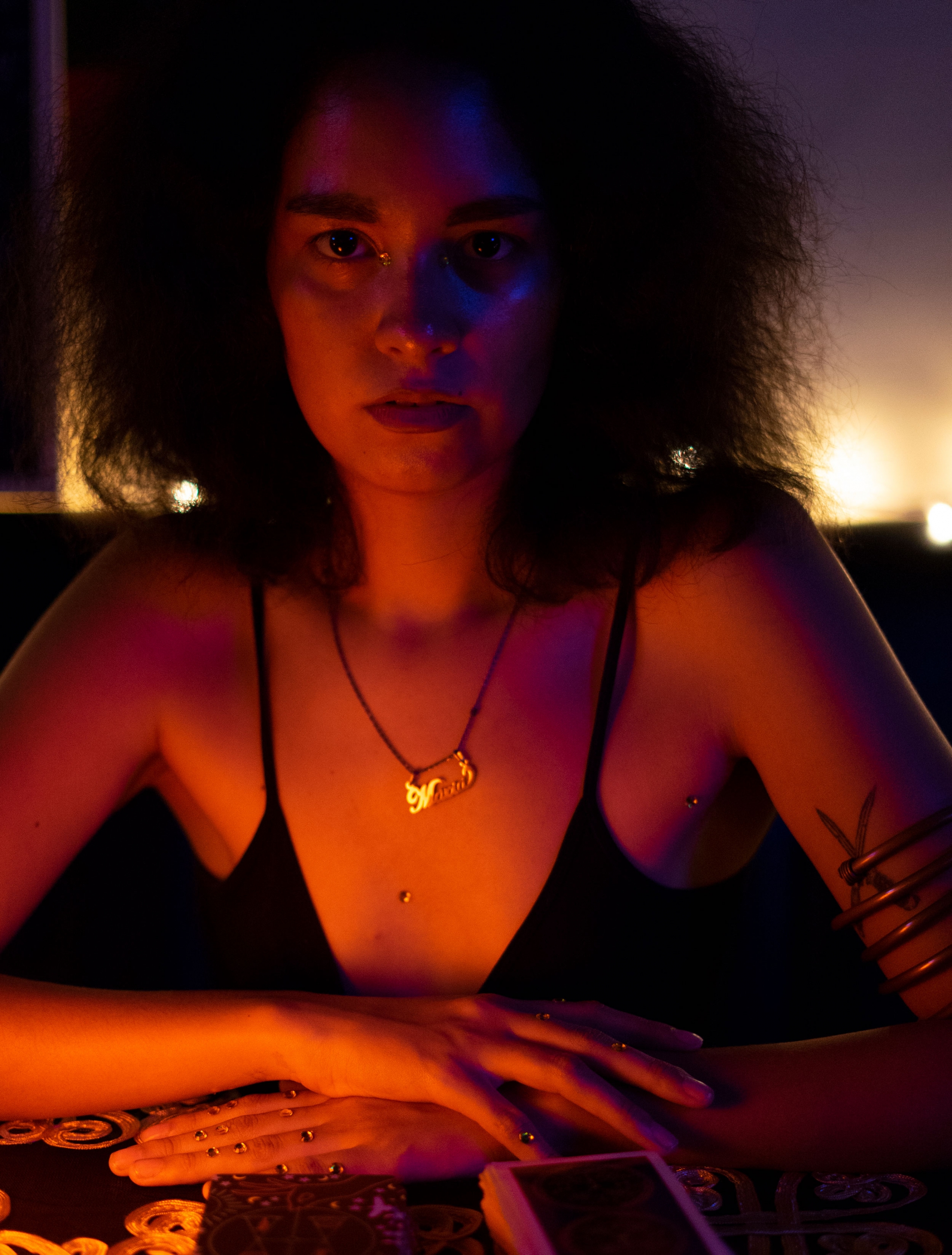 Maria Manrique says she's an aspiring wise woman who treats the physical through herbal magic and reads Tarot to heal mind and spirit.

“Adopting the term bruja at first was kind of complicated because I felt like there’s this whole need to hide spiritism,” she says. “In a way, we get rid of the stigma by breaking the relationship our parents or our grandparents have to certain words.”

Manrique is originally from Venezuela and has Caribbean roots from Haiti and the Dominican Republic. She grew up in a devout Catholic family that went to church every Sunday — but there was always a dash of the occult. Some of her relatives are oracles, and one aunt even reads tarot for the entire family despite being a “very Jesus-believing person.”

“Those two things are not opposites,” Manrique says. “You can be somebody that goes to church but also dabbles in divination.”

Manrique eventually moved to South Florida and started a spiritual practice. (She also divides her time as a hip-hop artist and babysitter.) She calls herself an aspiring wise woman who can heal the physical, through herbal magic, and reads tarot to cure mind and spirit.

She says her relatives, some of whom live in other countries across Latin America, still prefer not to talk openly about her spirituality.

“Ignorance is fear,” she said. “By being a mixed woman of color, I exist in this whole idea of having two things to choose from all the time. I’ve always been embracing this idea of saying it loud and proud because it’s about time we stop hiding.”

The women of Eleventh House shared their bruja coming out stories at an informal gathering in September at the Miami home of Jess Swanson, the group’s other founder.

The women, who were mostly dressed in black and adorned in trendy jewelry, complained about the challenges of running spiritual businesses and spoke of some other common witch grievances, including what to call themselves. For example, “bruja” could be used to emphasize one’s Latinx heritage, while “witch” could carry connotations back to the Salem Witch Trials.

“It depends on how I’m feeling," said Jessica Freites, 34, during a discussion of labels.  “On my business card, I’m a conduit.”

“I call myself a witch politically,” Karen Sabel Lewis Santa, 34, snapped back. Her healer name is Sabel Santa. It’s a combination of her middle name and mother’s maiden name. She said she wanted to empower her feminine energy.

It’s exactly these kinds of exchanges that Swanson and Garcia hoped would be cultivated when they embarked on Eleventh House earlier this year. 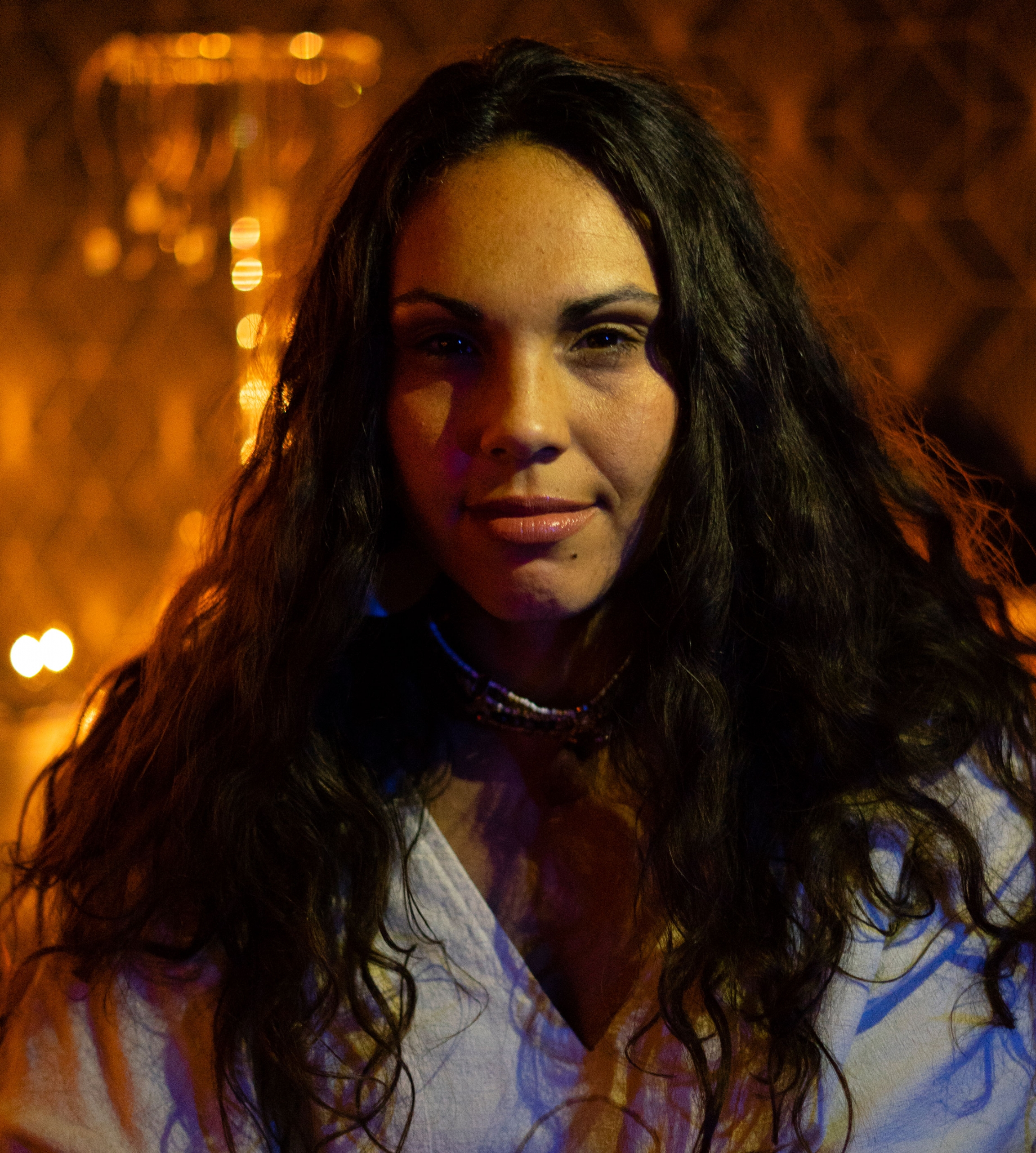 Jessica Freites is a conduit and offers other healing arts services.

The two Miami natives said the idea for the group came out of hosting astrology parties, like the one at Mama Tried. They wanted to grow the concept into an organization that would help the mystics’ practices and make brujería more mainstream.

“Mysticism, witches, it becomes very gimmicky and Halloween, but anyone living in Miami knows it feels very different from how it’s commercial. I believe wholeheartedly in what they do. I don’t think it’s foo-foo-woo-woo stuff," said Swanson, 27, a journalist and the only non-bruja in the group, who wrote a story about the Miami bruja scene for The Miami New Times last year.

Garcia and Swanson reached out to several women who they considered serious about their work in everything from touch therapy to mediumship to general healing arts.

Garcia, a tarot reader and tattoo artist, said the group also provides a platform for religious beliefs that have roots in the Caribbean and Latin America. She grew up in Hialeah, where Santería "orbited" her. She said she never saw any rituals and recalled her grandmother would see a babalawo, a Santero priest. That spiritual curiosity stayed with her, though.

“It being inaccessible was really hard for me,” she said. “You want to talk to somebody about something you’re interested in and you don’t even have the words for it.”

Sabel Santa, a Puerto Rican bruja and astrologist, said new clients have contacted her after she joined Eleventh House. Many people came to her by word of mouth and now she’s hearing from strangers. She charges anywhere from $10 and up to $75 for more in-depth astrological readings and spell work.

Much like Manrique, Santa discovered her affinity for the unseen at an early age. At 3 years old, she says she went mute for six months and could only communicate telepathically with her grandmother.

“We created this really intense bond,” she said. “My grandmother would never call herself spiritual or anything, but she was attuned to energy. She could tell when things were going to happen. She was very prophetic.”

Santa says she has called herself a witch since she was 13 years old. She became interested in channeling energy (which is how some witches describe witchcraft) to deal with a painful chronic blood disorder.

Earlier this year, Santa quit her “normie” job in fashion to pursue her spiritual practice full time. She also started Brujx School, where she teaches people the history of brujería and spellcasting — in person and online via Instagram Live. (Those lessons are for more sensitive material like sex magic.)

“I think everybody is a witch in my opinion,” she said. “If you’re doing it consciously, OK, you’re a witch.”

Brujas of Sabel’s generation agree that it’s time to start doing it openly.