An old wooden guillotine used for executions and left by the French in Saigon, Vietnam.

Concerns about the drugs used for executions are being raised again after the federal government announced it will once again execute inmates convicted of capital crimes — almost 16 years after the last execution was carried out.

International drug companies will no longer sell drugs for use in lethal injections in the United States. But Attorney General William Barr has authorized the federal justice system to use the widely available drug pentobarbital, despite concerns about whether that method violates the Eighth Amendment, which prohibits cruel and unusual punishment. In common use, the drug controls seizures in humans and is often used to euthanize pets.

In 2014, several executions carried out by states with untested methods using a mixture of drugs caused suffering and took hours to end prisoners’ lives.

Among them was the botched execution of Oklahoma inmate Clayton Lockett, who thrashed around in pain for 43 minutes before dying and prompted President Barack Obama to call for a moratorium on the death penalty for federal inmates.

While the death penalty is the ultimate punishment meted out by the state, it is not meant to be torture.

Related: US college student among 37 men executed in Saudi Arabia

From the stake to the rope to the firing squad to the electric chair to the gas chamber and, finally, to the lethal injection, over the centuries the methods of execution in the United States have evolved to make execution quicker, quieter and less painful, both physically and psychologically.

It wasn’t always so. And there are, perhaps, lessons in history that could provide an answer to current concerns about the unusual cruelty of execution methods in the US.

Related: Is the death penalty a European concept?

Under the French monarchy in the 17th and 18th centuries, executions were meant to be painful. That would purify the soul of the condemned before his final judgment, deter others from committing a crime and showcase the power of the king to impose unbearable suffering on his subjects.

Not everybody suffered so terribly, however. This parade of horrors was the fate of commoners. For nobles, a quick, relatively painless and more dignified beheading replaced an hours-long public display.

One of the many goals of the French Revolution, which took place from 1789 to 1815, was to level society, to take away the privileges of the nobility, who lorded over commoners. 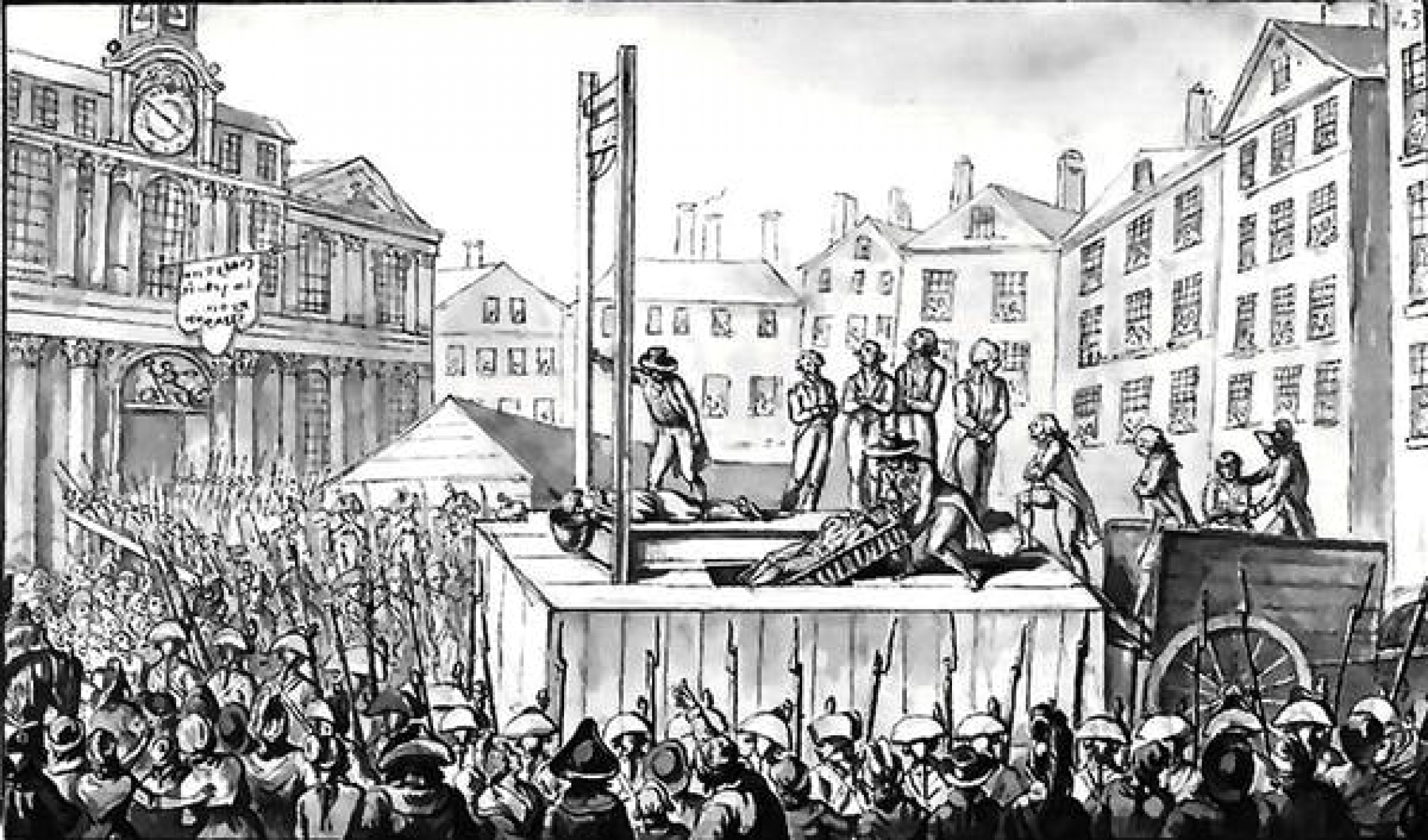 Execution by guillotine in France, 1793.

Medium is the message

The solution to disparate forms of execution and social equality was first presented to the French National Assembly on Oct. 10, 1789, by Dr. Joseph Guillotin, who presented plans for a bladed machine to execute criminals.

It would be easy to use, work quickly and offer the same treatment to all condemned, regardless of social standing. His ideas finally became law in March 1791 and the guillotine was used for execution the following year.

The so-called “national razor” took off the heads of the royal family as well as the humblest thief. It leveled bodies and society, with all citizens subject to the same punishment. And it ended the capricious torment of the condemned by the monarchy as well as the privilege that nobles had, even regarding the manner of their deaths.

The guillotine was a killing machine that provided not just a convenient method of execution but the proper political and ideological message for the French Revolution.

Eventually, the French Revolution became more politically radical, moving from a system where the king would continue to govern within a constitutional system to a republic where the people’s representatives would wield political power to a de facto dictatorship. As the revolution became more radical, and politicians saw plots everywhere, increasing numbers of citizens were sentenced to death.

With the need to execute many prisoners the guillotine was pressed into greater use. The most careful estimate for the number of French executed during the Terror, the height of the radical revolution, was 17,000. This number included almost exclusively those charged with political crimes.

Related: Canadian given death penalty in China for drug smuggling

It was the guillotine’s plummeting blade that took off head after head with just a bit of cleaning and sharpening in between, answering the need of the moment. Thus it came to symbolize state terrorism but also swift and equal justice.

The guillotine remains a quick method of execution — it takes about half a second for the blade to drop and sever a prisoner’s head from his body.

While the moment of execution could be nothing but terrifying, that second of suffering was brief in comparison to the 43 minutes it took for Lockett to die after lethal drugs were administered.

In the same year, 2014, convicted double murderer Joseph Rudolph Wood of Arizona suffered for two hours before succumbing to the jerry-built drug cocktail dreamed up in a warden’s office. In 2018, an Alabama execution had to be halted after 12 attempts to place an IV line in Doyle Hamm failed.

The current technology of execution does not reliably provide the humane death demanded by the Constitution. In requiring an IV line and medical personnel to administer drugs it also involves medical practice with the death penalty.

Although the guillotine may be the bloodiest of deaths — the French used sandbags to soak up the blood — it does not cause the prolonged physical torment increasingly delivered by lethal injections.

Should the US consider using the guillotine to administer capital punishment?

Related: Free after five decades on death row, a Japanese man may be forced to return

It has advantages — no secret recipes for lethal injections, no botched placement of IV needles, no conflation of medicine and execution.

While the guillotine provides a death that is not easy to witness, the death it delivers to the condemned is quick and does not cause the extended pain of bespoke lethal injections. Could such a death — as bloody as it is — pass muster with the Eighth Amendment’s mandate against cruel and unusual punishment?

Janine Lanza is an associate professor of history at Wayne State University.