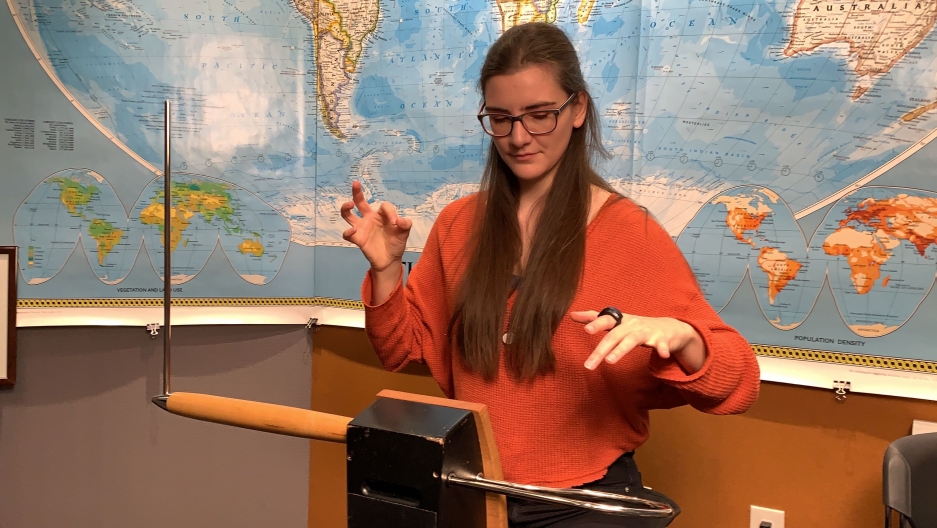 Carolina Eyck is one of the world's foremost theremin players. She recently visited The World's studios in Boston.

“[Léon Theremin] was just experimenting in his lab and somehow found out that you can create a sound by moving your hand in electromagnetic fields.”

Russian inventor Léon Theremin, a cellist and physicist, was doing research for the Russian government on something called proximity sensors.

That was in 1919. Soviet leader Vladimir Lenin reportedly “adored” the newfangled contraption. Léon Theremin brought his instrument to the New York Philharmonic, and his so-called “ether-wave” concerts were a hit all over Europe.

Even though the theremin isn't exactly mainstream today, it has had a big imprint in popular culture. For starters, the theremin's eerie, shaky sound figures prominently in the sci-fi classic, “The Day the Earth Stood Still.”

Related: Theremin 101: How to sound like a flying saucer

The theremin also made its way into musical genres such as exotica and jazz lounge. In the 1960s, the Rolling Stones and Led Zeppelin took up the theremin. For a while though, the theremin virtually disappeared, resurfacing in the 1990s when Léon Theremin died.

“You have a box with electronics inside and then you have two antennas on each side of the instrument. And when you move your hands in the air, you get a sound.”

Eyck, who is based in Leipzig, Germany, got her introduction to the theremin from Lydia Kavina, the granddaughter of Léon Theremin's first cousin.

Eyck explained how the thing works: “You have a box with electronics inside and then you have two antennas on each side of the instrument. And when you move your hands in the air, you get a sound.”

The theremin is the only instrument you don't touch to play it, she adds.

It's a sight to behold — here are demonstrations from Eyck, who has developed an influential technique for coaxing sound out of the theremin, and Léon Theremin himself, below.

Eyck, whose latest album is “Elegies for Theremin and Voice,” says her own voice sounds an awful lot like a theremin. She recently visited The World's studios in Boston and spoke to host Marco Werman about the instrument that turns 100 this year. Happy birthday, theremin!

Marco Werman: So, you were just 7 when you started playing this thing. What attracted you to the theremin at that age?

Carolina Eyck: My parents bought me the instrument and they thought it was cool and they needed someone to play in their band and they didn't have time to practice. They were like OK; they did electronic music, you know. They had all these synthesizers in their studio. And as a baby, I would already hear these sounds, so I grew up with electronic music and theremin was a natural instrument to come along.

So, Carolina, you've developed your own theremin technique. Explain how you play the theremin and why it's different from how it's been played historically.

I came up with a technique where I can actually measure the air with my hand and I have certain finger positions which are certain notes that I can be sure anytime I play, I hit the right pitches.

And it's especially difficult because you're working in three dimensions, not on a flat kind of keyboard or a fretboard.

With a theremin, it's very special because on one hand, you have to be very focused to play your notes in tune, but then, you have so much freedom, you know, you can make a sound anywhere; you can just move your hands anywhere in space, and it will make a sound. So, it's really balanced between being focused, being concentrated and using the freedom you have.

So, the theremin has a really interesting reputation. It's been used in sci-fi movies like the 1950s alien invasion flick, "The Day the Earth Stood Still," to create a very ominous eerie mystique. Carolina, how many times have you heard that?

Well, a couple of times, I played it, too.

So, your music is more lyrical, I think we can say, and beautiful than people might expect of the theremin. On your album, "Elegies for Theremin and Voice," you layer the sound of your instrument with your own voice and it sounds nearly human, I mean, almost like Gregorian chants. How are you rethinking the theremin sound, and what do you think about its reputation?

I think, especially for "Elegies for Theremin Voice," that my voice comes very close to the theremin. When I sing, I unconsciously imitate the theremin. Some people say, well, you sound like a theremin when you sing and then probably the opposite, as well. When I play the theremin, I approach it as if I would sing. So, when you hear the music, you sometimes can't even tell: Is it the voice, is it the theremin that you're hearing? And I think this gives the theremin something human. But then, also, the voice is something unapproachable. It's kind of this mix between technology and something human.