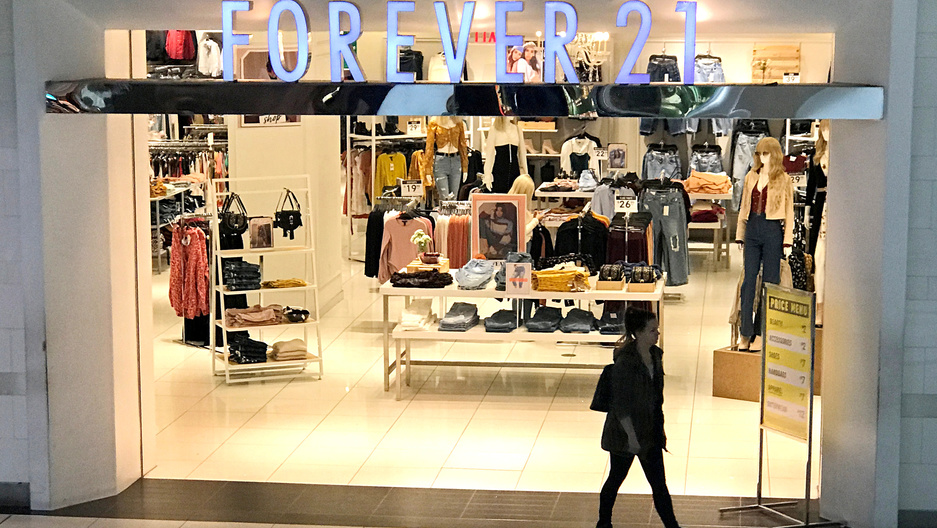 A shopper walks from a Forever 21 fashion retail store in downtown Toronto, Ontario, Canada, on Sept. 30, 2019.

Fast-fashion retailer Forever 21 filed for bankruptcy late on Sunday, joining a growing list of brick-and-mortar companies that have seen sales hit by the rise of competition from online sellers like Amazon.com Inc and the changing fashion trends dictated by millennial shoppers.

Forever 21 Inc, the privately held company that helped popularize trendy and cheap clothing, has fallen out of favor with shoppers, in part due to other retailers like Sweden's H&M and Spain's Zara that churn out affordable styles similar to those recently seen on designer runways.

Younger, more environmentally conscious shoppers are also choosing brands that ethically source garments instead of retailers that use cheap fabrics to make T-shirts that are snapped up for $5. Resale sites like thredUp.com, which calls itself the largest online thrift store, are also growing in popularity.

Related: Your ‘recycled’ laptop may be incinerated in an illegal Asian scrapyard

She said the chain did little to differentiate itself from others.

"They used to have a bit of an older customer, but customers have become more conscious of where they spend their dollars. They want sustainability, they want to feel represented and I don't think Forever 21 particularly stood for any of this," she said.

Dana Thomas, author of "Fashionopolis: The Price of Fast Fashion and the Future of Clothes," is a fashion journalist who researches younger consumers' shopping habits and sustainable fashion. She talked to our host, Marco Werman, about the fashion industry's response to its changing consumer base.

Marco Werman: What does the bankruptcy announcement from Forever 21 mean for you? Is it simply another step in the decline of retail, or is a sign that the environmental and labor nightmare that is fast fashion is losing favor?

Dana Thomas: The old-school 20th century model of retailing is over. Direct to consumer and e-tailing have taken over. The climate crisis week that we just concluded and all these different things are making customers think hard about purchasing clothes en mass. Mostly it just proves that the economies of scale model doesn't work in the long run.

What's interesting is that Forever 21's audience is young. Younger even than the name suggests. It sounds like you're saying that teenagers are waking up to what fast fashion and the climate actually means to them. Is that right?

Absolutely true. I've been on this book tour for about a month and I keep talking to Generation Z and millennials who are just up in arms about all this. They're marching in the streets in London and getting arrested and protesting here in Paris. Then there's Greta [Thunberg] hammering away at the United Nations. So, yes, they're really concerned about this and I think they're more concerned about the planet than they are about their closet. There's a whole movement to being more consciously aware and more responsible as a consumer and it's coming from the youth. It's about veganism. It's about not buying into fast fashion but rewearing, reselling and renting clothes. These companies that are based on selling volume at cheap prices are going to have a lot of trouble.

How does this news impact foreign economies?

In the past, Forever 21 has been busted in Los Angeles for producing in sweatshops and they said they didn't know that their things were being produced in sweatshops and that they had been subcontracted by their contractors. But most clothes are actually made overseas and 98% of the people making apparel for us today are not paid a living wage. In Bangladesh, they earn $68 a month. I wish that fashion brands were investing more in labor and training people to do better work and paying them for it as opposed to just churning out junk that they can sell for pennies a piece. If you pay $20 for something at Forever 21, that meant the person who made it was paid 20 cents. That's just a terrible ratio and it's not sustainable on an environmental level and it's not sustainable on a humanity level.

When it comes to fast fashion, as a consumer when we're walking through a store or shopping online, what red flags should we be looking out for? If something is cheaper than it seems does that signal something?

Are there brands or labels or designers who are doing this right?

There's plenty. I mean that's the antithesis of fast fashion. It's called slow fashion and it's exactly that. It goes slowly. There's zero waste. They make only what you need. You pay more for it, but you're paying what it's worth. You're paying for the labor so somebody can have health care and earn a living wage. You're paying for good materials that are sustainably grown and sourced. You have to pay for that.

For these muscular box store versions of fast fashion like the Primarks or the H&M's of this world, what are they seeing when they see a Forever 21 go belly up or are they just waiting for the ripples to hit them now?

I think they are scrambling and they're trying to figure out how to not let that happen to them. You may see some shifts in policy and the way business is done. Already, H&M has been embracing the sustainability movement. They say by 2020 they'll only be sourcing sustainable cotton. So, H&M is on the ball in trying to make their company somewhat greener but as long as their business model is based on volume, these companies will never be wholly sustainable. I think they're now scratching their heads saying, "How are we going to tweak our business models so we don't wind up like Forever 21?"

At the high end of things, how much does sustainability come into play at say, Paris Fashion Week, or Milan, where a garment will set you back like $10,000?

Well, more and more. Last night, I was at a powwow that Stella McCartney hosted and was talking about how to get this to reverb across the industry. Stella said, "There's no reason why luxury isn't using organic cotton." If it's seen as a luxury because only 1% of our cotton today is organic, then surely the luxury brands should be sourcing it. There is a cleaner future if we put our mind to it.