The firefighters in the once verdant district of Pulang Pisau often have only makeshift equipment, with little more than face masks to protect against choking smoke from the blazes.

"We can't afford to provide fireproof suits for the volunteers, so they wear what they own, but the important thing is to ensure their safety," said Mulyadi, a military officer overseeing the effort. 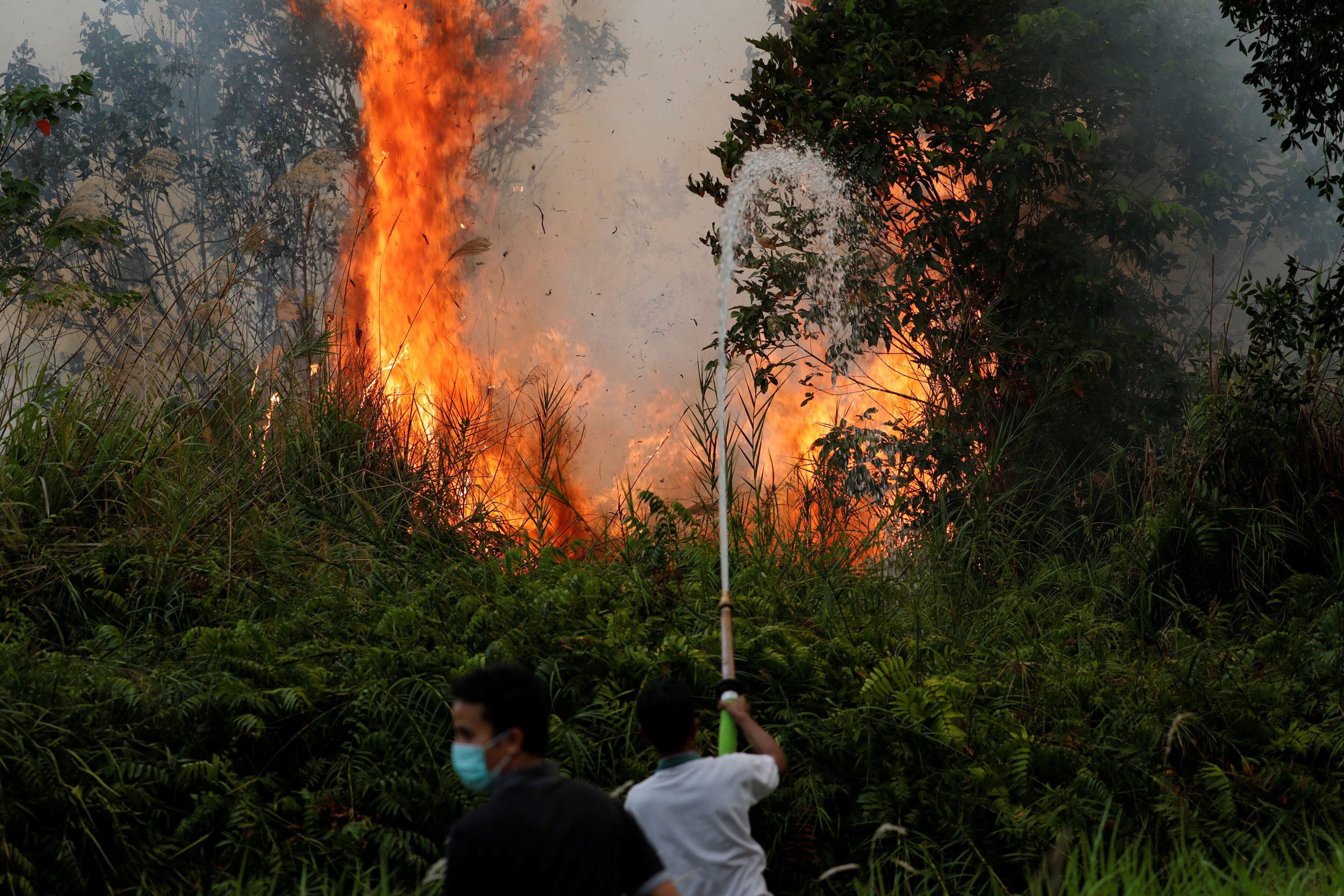 Volunteer firefighters try to extinguish fires at a peatland forest.

The volunteers, often clad in sandals or trainers, line up in military fashion alongside others from the army, police, the disaster mitigation agency and non-government bodies, such as Greenpeace, for a briefing on the day's tasks. 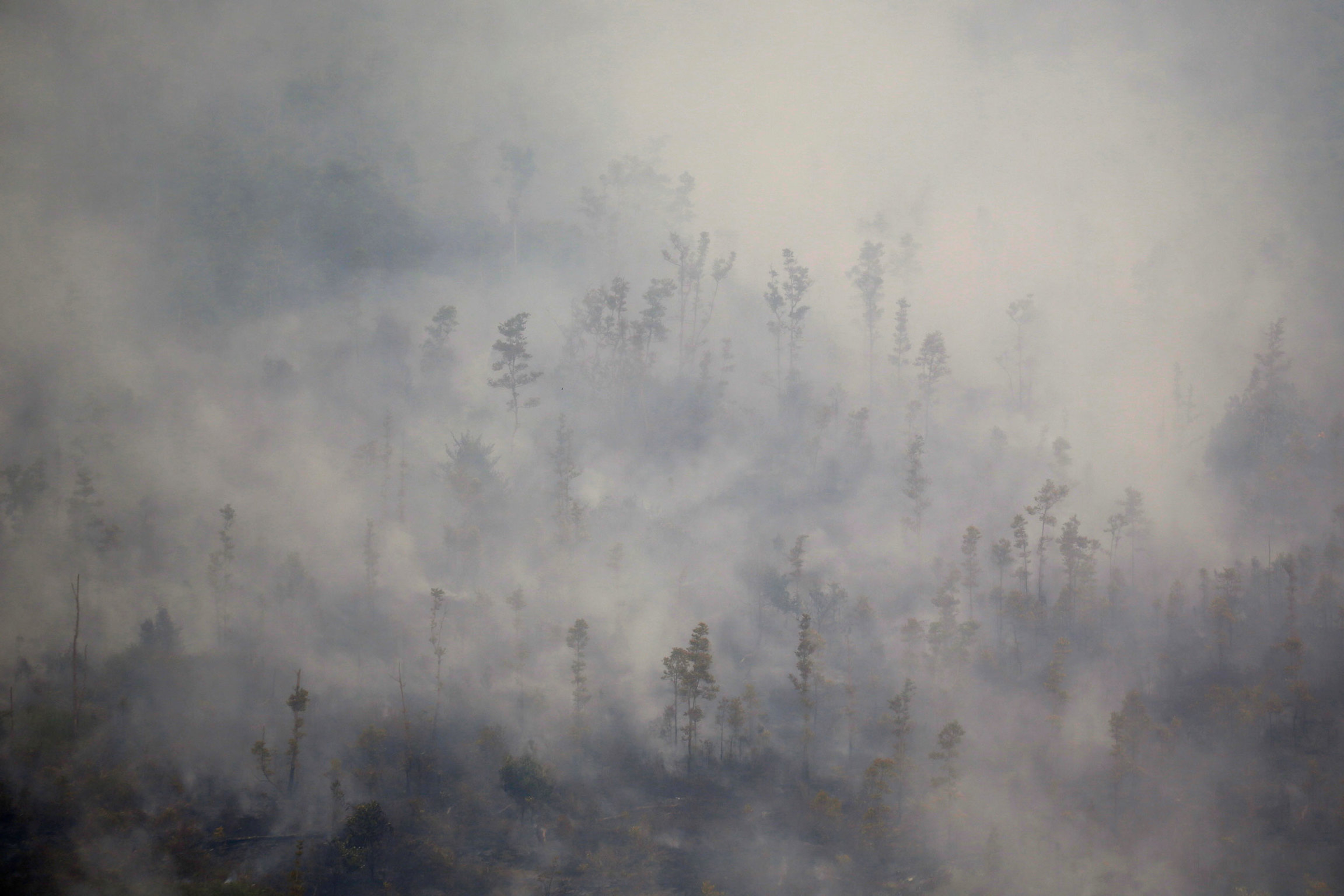 Smoke rises above trees during a forest fire.

The fires have sent a choking smog across Borneo and Indonesia's island of Sumatra, as well as the neighboring nations of Malaysia and Singapore, carried by shifting winds. 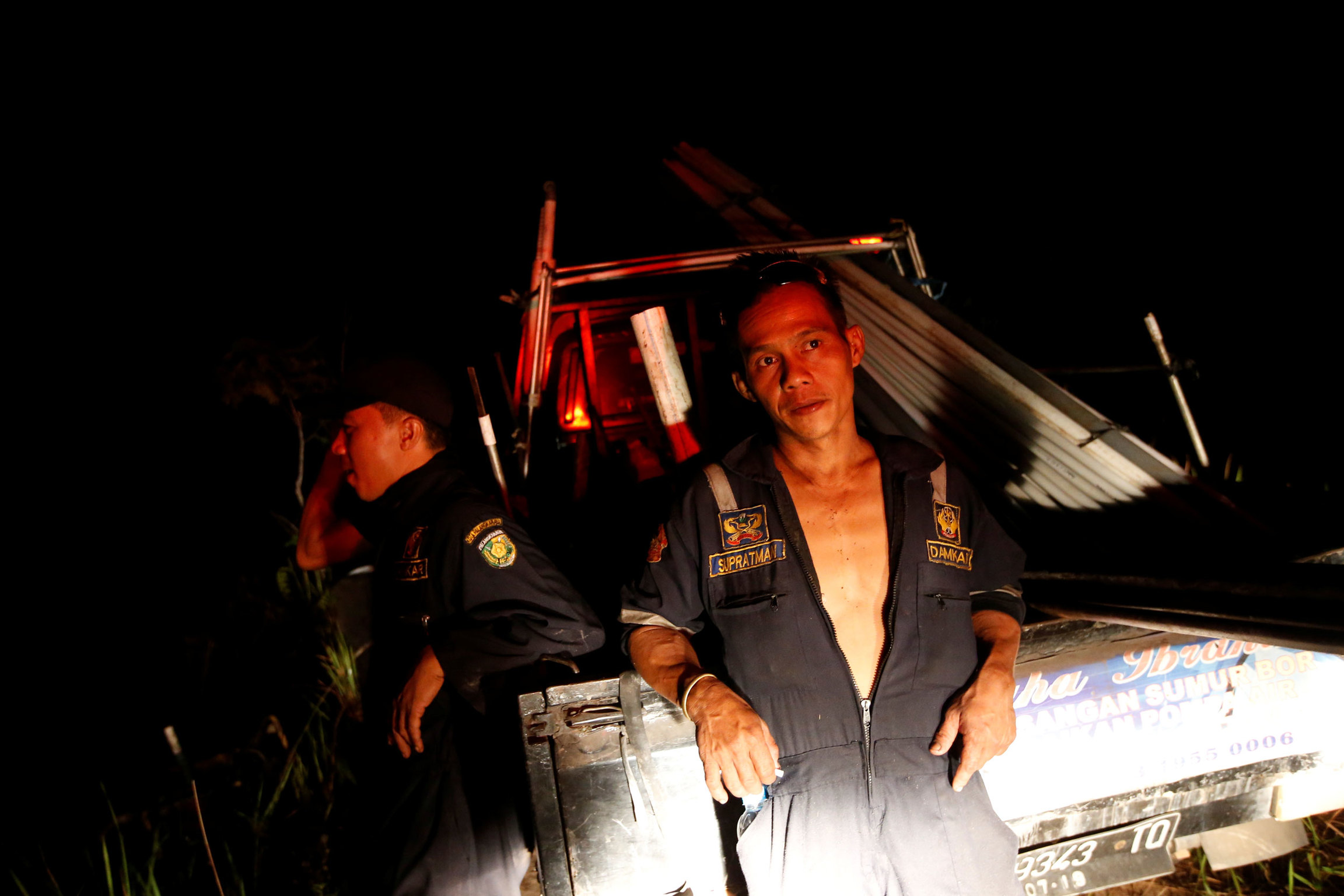 Fire fighter personnel rest after extinguishing fire on a peatland.

This year's hot spots are the most numerous since devastating blazes in 2015, as an El Nino weather pattern exacerbates the annual dry spell.

Indonesia has sent more than 29,000 military, police and disaster agency personnel, along with 34 water-bombing helicopters, to fight the fires, its disaster agency has said. 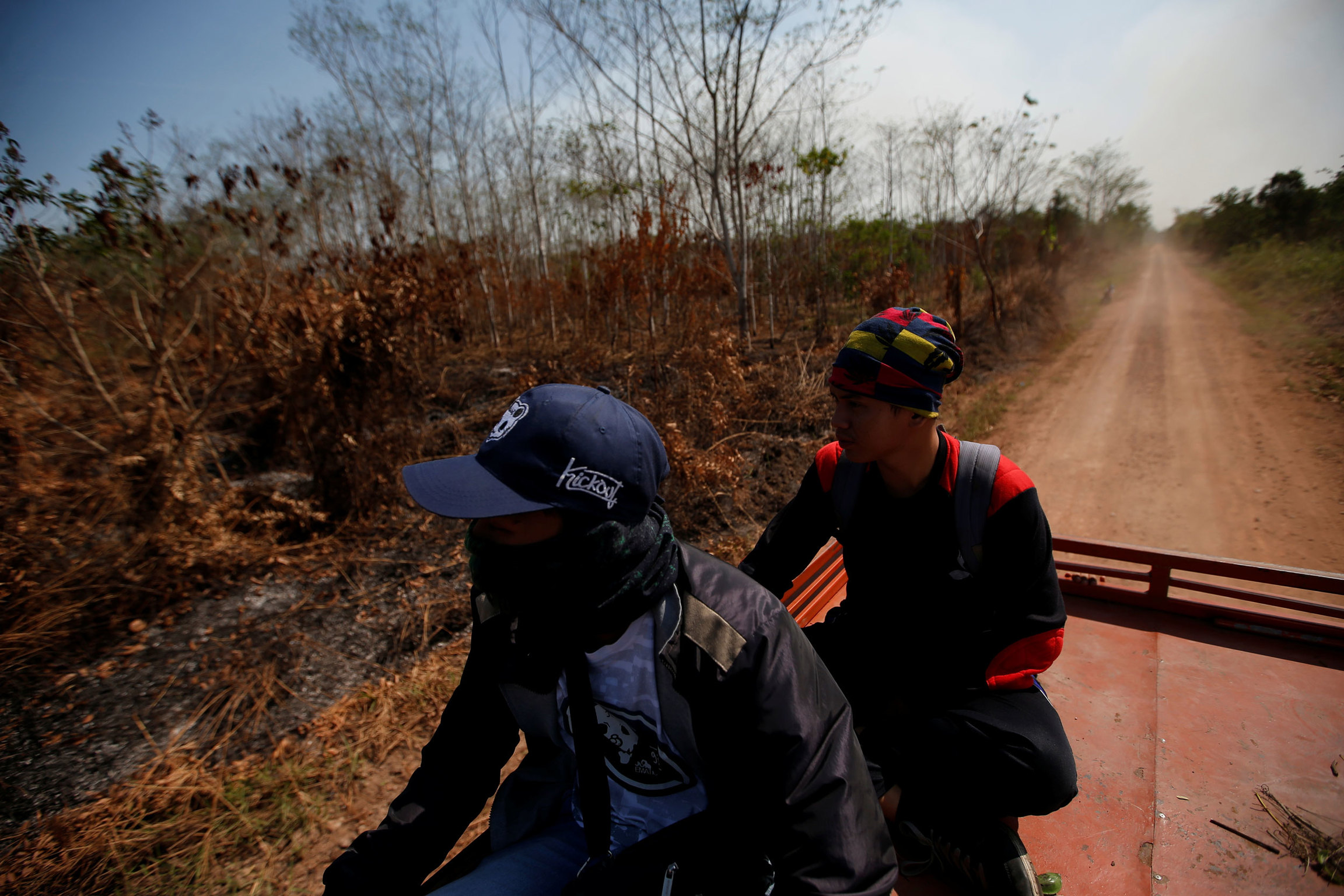 Yudi Oktama, 21, said he had spent about two months as a volunteer, popularly referred to by the abbreviation "satgas", for "satuan tugas", or task force in Indonesian, and received a stipend of 100,000 rupiah ($7) a day.

Saleh Hendra, 41, another volunteer, said the hardest part of the job was trying to tackle stubborn fires on peatland, which is especially flammable and can repeatedly reignite. 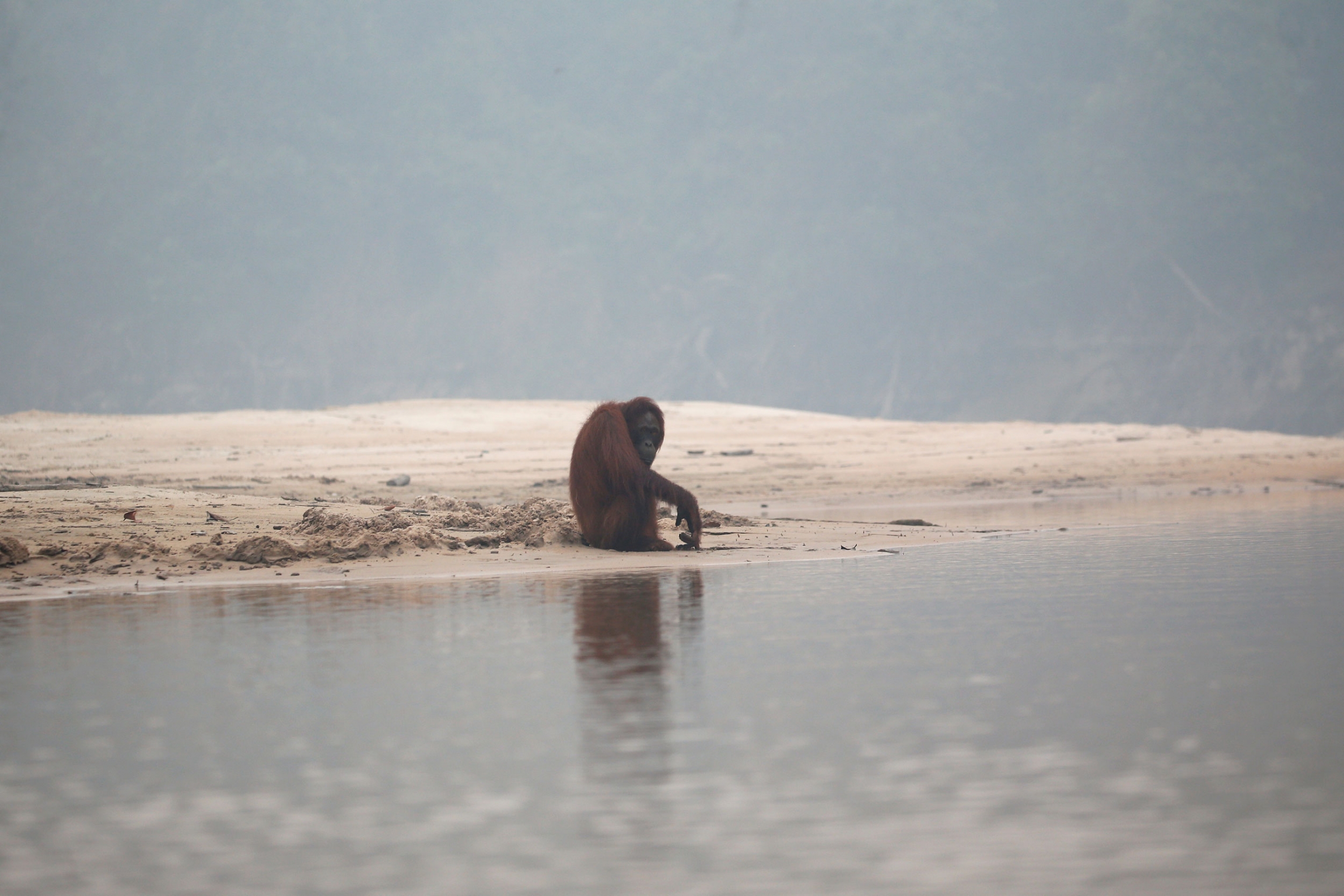 An orangutan sits as smoke covers Salat Island which is used by Borneo Orangutan Survival Foundation in Indonesia.

"There is more sorrow than happiness (in this work)," he said, describing long days in the field that often force the volunteers to skip Muslim Friday prayers.

Asked if he was afraid, he responded, "What else can we do? The fear is there but we’re concerned because of our families." 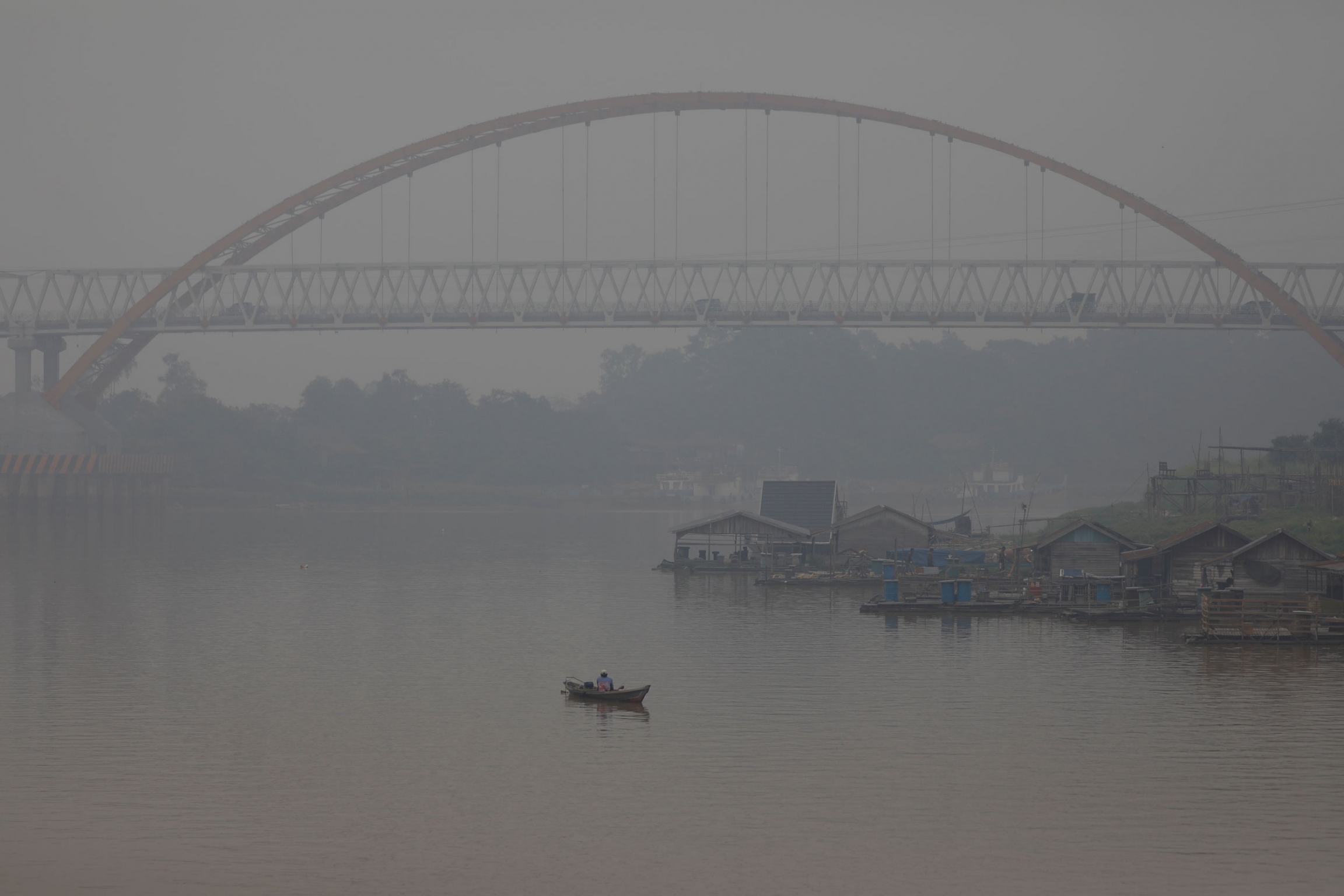 A man fishes as smoke covers the Kahayan river.

The role of volunteers includes educating residents on ways to avoid slash-and-burn clearance of new land for plantations, a practice often blamed for the fires.The district in Indonesia's province of Central Kalimantan on Borneo is home to 126,000 people, and about a fifth of its 95 villages are vulnerable to forest fires in the dry season.

It is often a struggle to find water to pour on the flames, as more than half the area's 9,000 wells were dry, said Mulyadi, who uses only one name. 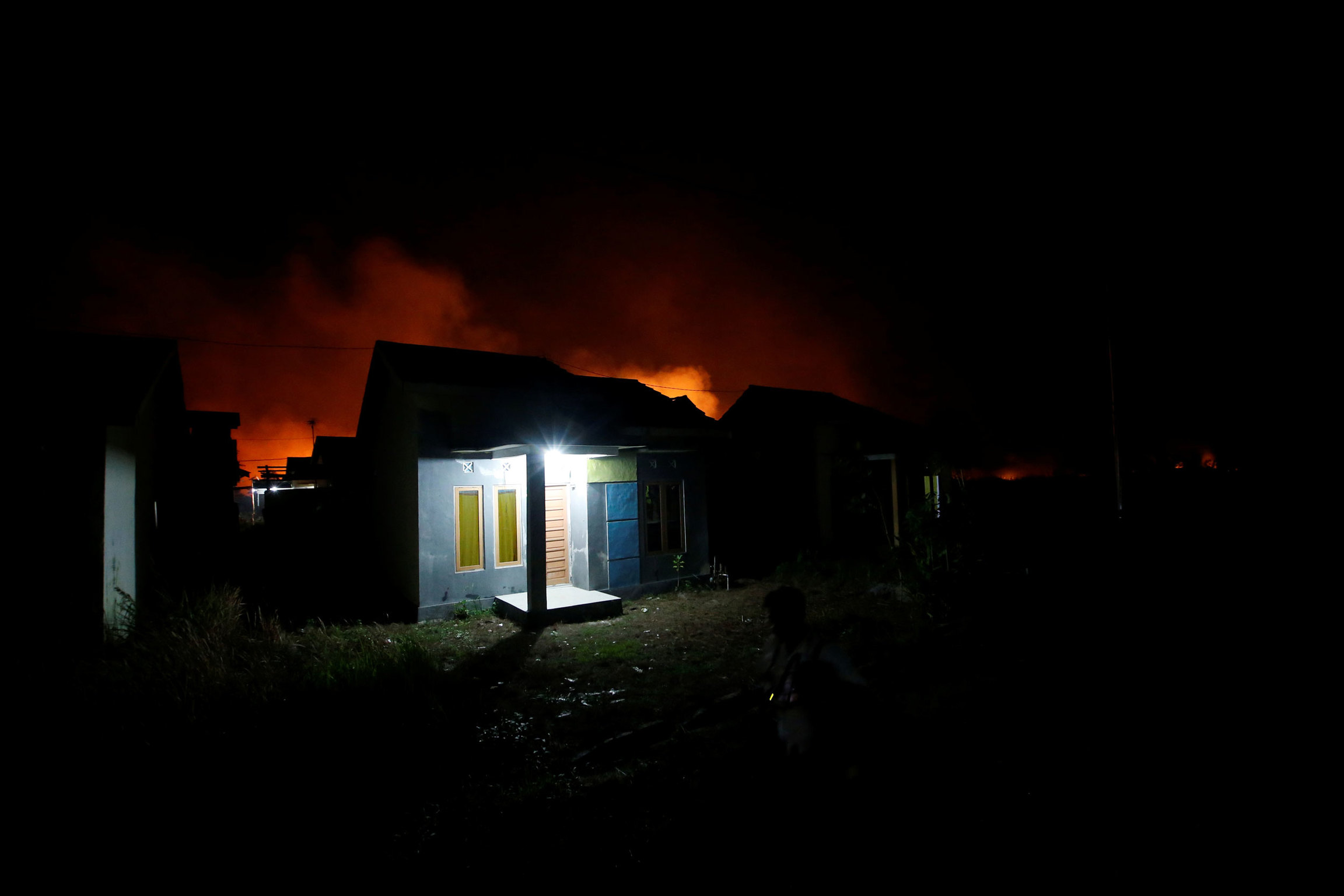 A man walks as a fire burns behind a residential area.

Some residents use buckets of water to douse flames threatening their homes, often marooned in scorched areas of gnarled and charred tree trunks.

As night falls, firefighters don headlamps, flashlights, or fall back on just the torch on their handphones to illuminate their path. 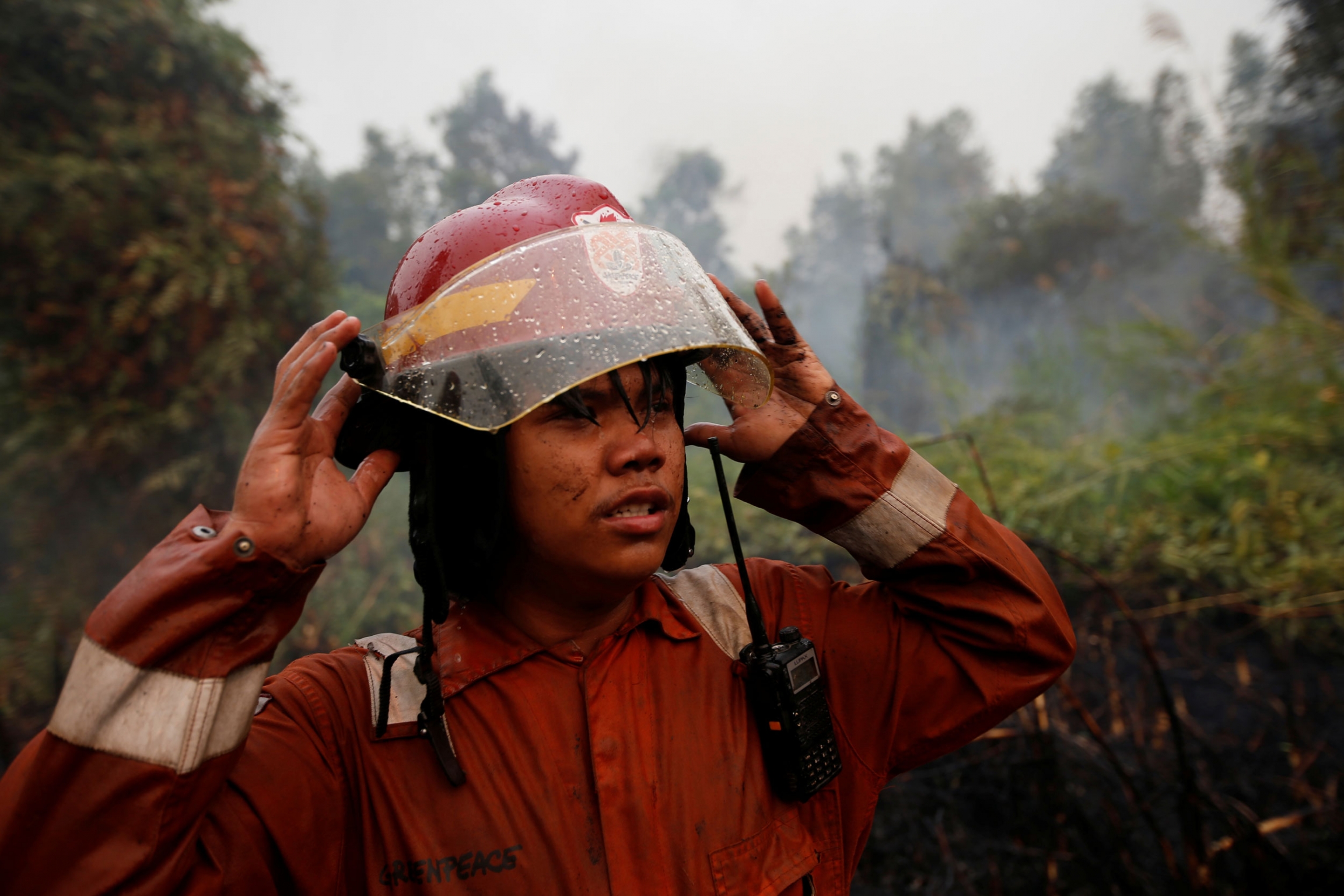 Bimpi Permata Restu, an 18-year-old man who is a volunteer of Greenpeace's Forest Fire Prevention reacts as he extinguishes forest fires.

In the provincial capital of Palangkaraya, the air pollution index has hovered above 500 for days, a level that environment officials classify as dangerous.

"The air quality is similar to inhaling 50 cigarettes at the same time," said Sumarni Laman, a volunteer at the city's Ranu Welum Foundation, who works to preserve the culture of the region's Dayak people and protect forests. 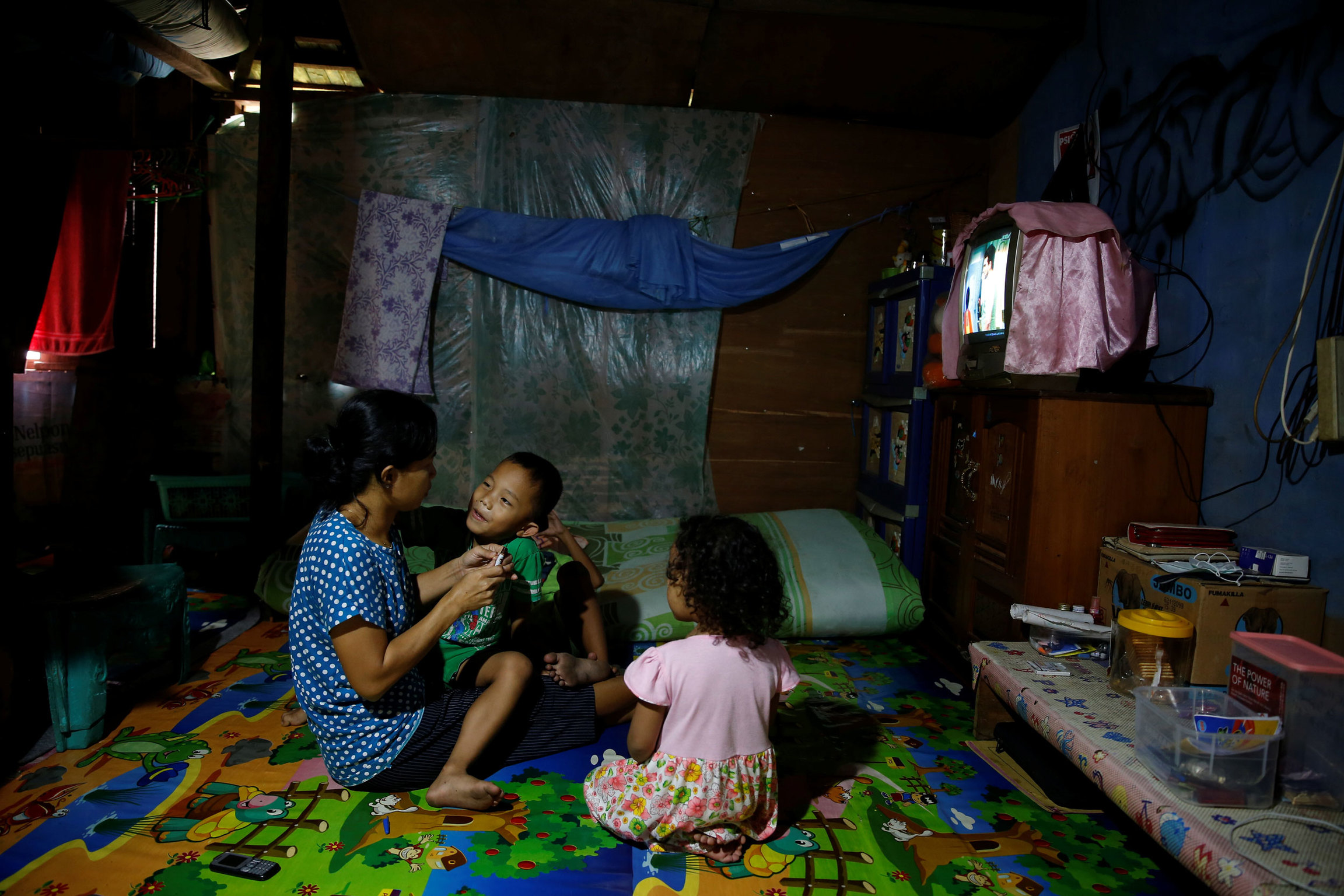 Risa Astrinova sits with her children at home.

Shopkeeper Risa Astrinova said she worried about the health of her six-year-old, who suffers from asthma. 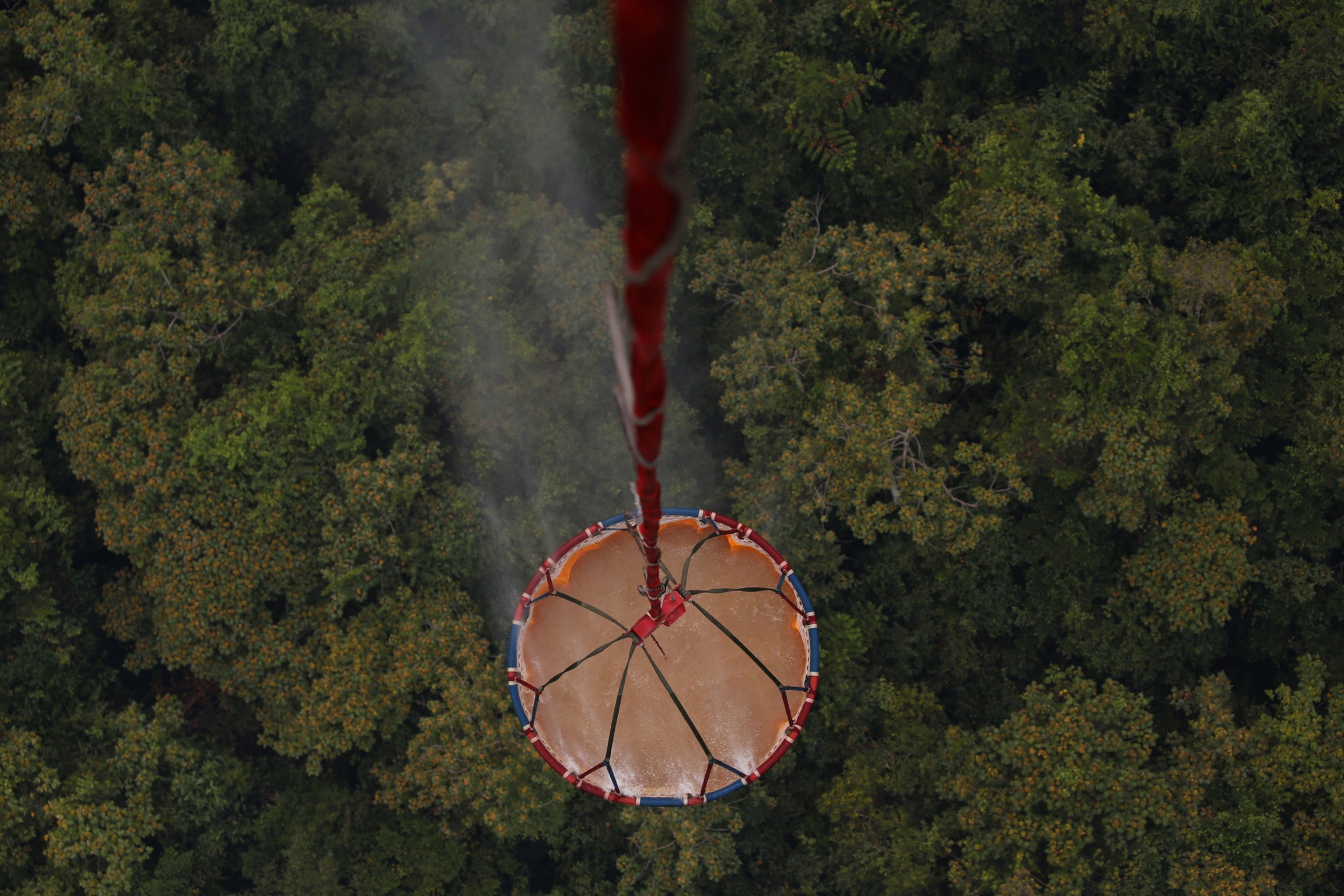 "I'm afraid for my son, he has just been discharged from the hospital last year," added Astrinova, 31, who was forced to close her small shop for a week because of the smoke. 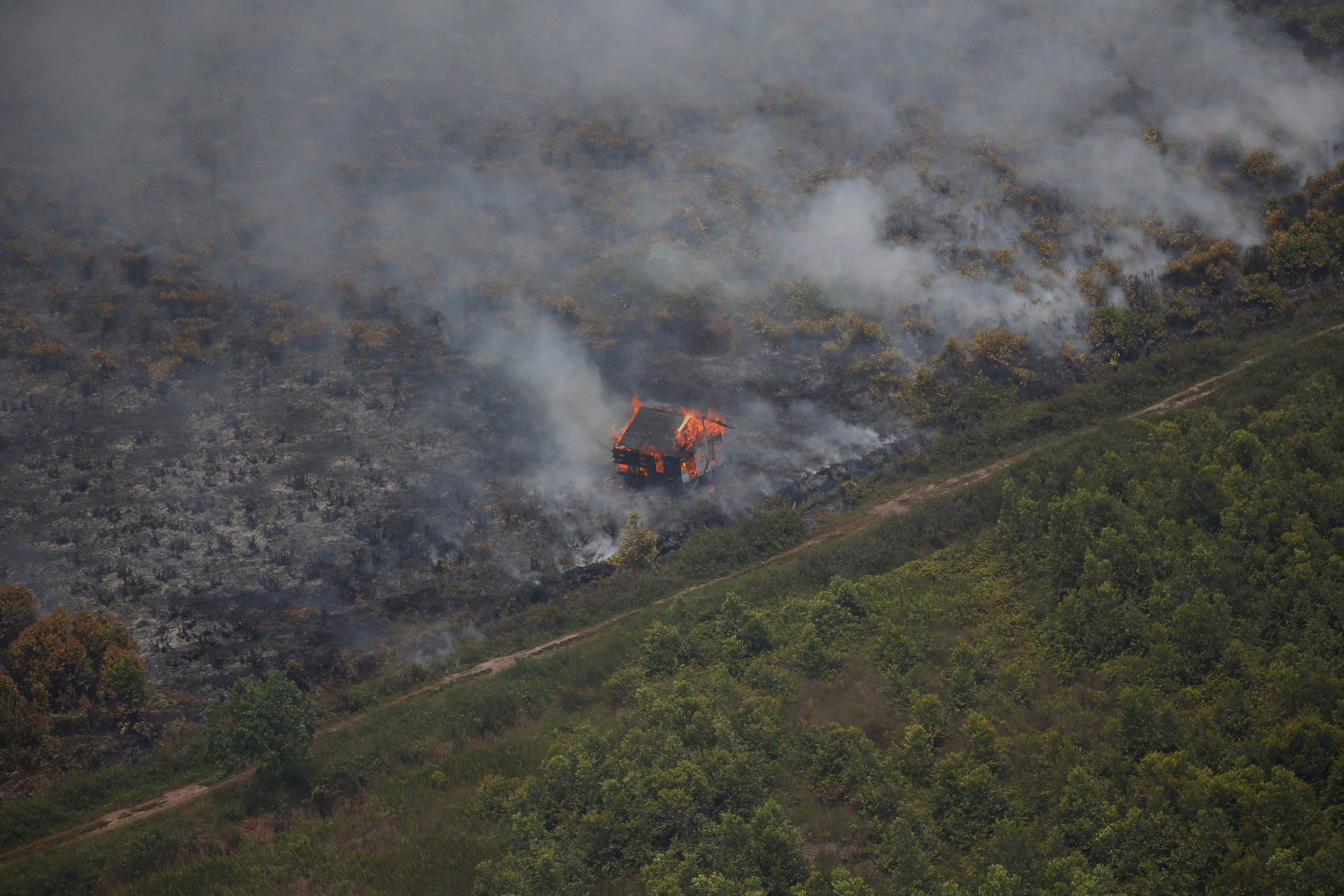 A wooden hut, seen from above, burns due to a forest fire in Palangka Raya, Indonesia.