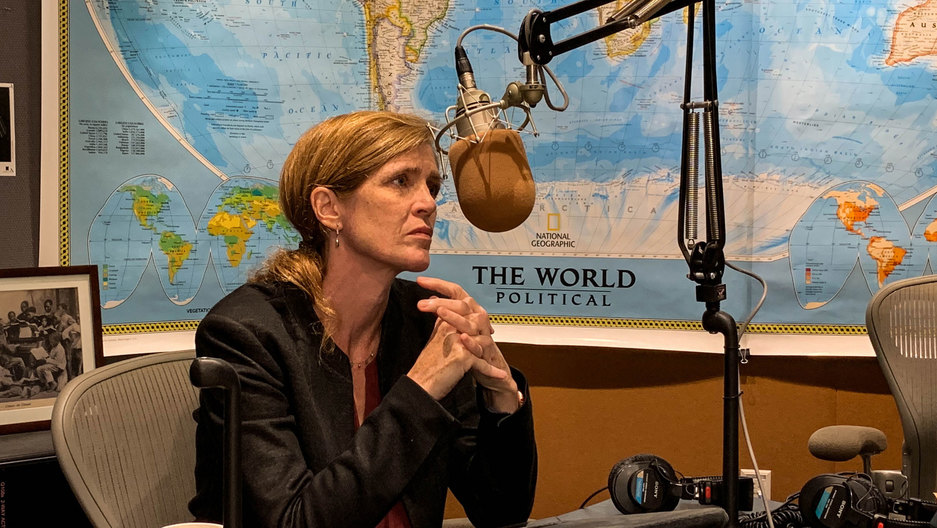 If a Democrat wins the 2020 presidential election, Samantha Power would likely be on any shortlist for Secretary of State.

Power is a human rights activist and served as the United States’ ambassador to the United Nations for President Barack Obama.

She has a new memoir out called, "The Education of an Idealist." In it, she comes across as an idealistic humanitarian, determined to right wrongs around the world.

Power spoke to The World’s Carol Hills about humanitarian interventions, foreign policy decisions during the Obama administration, and why there's always a reason to be hopeful.

Carol Hills: This book is very personal. You talk about your family, your love life, what it’s like to be inside the White House, up against big egos (mostly men), struggling to get President Obama to listen to you. You come across as someone determined to right wrongs, save people, almost from the word go. Where did that come from?

Samantha Power: I was raised Catholic in Ireland, and very early on learned, "Do unto others as you'd have done onto yourself." But I also tell the story in the book of my father, who died when I was very young. He was a drinker, and we grew up in Ireland till I was 9. And definitely, I felt like I was the person who was the closest to him.

On some level, some subconscious level, I think, for much of my life I felt I wasn't there for him and didn't manage, somehow, to get him to give up the drink and take care of himself. And of course that's what a child thinks often, and it's a bit unfair on oneself. But maybe there's something in that as well that you then translate into your work life later on.

I ask in part because a lot of your approach to foreign policy and the US' role in the world is that the US has a special role to play, and the US can make a difference in people's lives overseas. That was a big impetus behind your strong push for intervention in Libya in 2011. You were a key voice in pushing for the US to intervene and 1,600 airstrikes later, Muammar Gaddafi was toppled. Some called President Obama's decision a personal triumph for you. It was framed as a response, in many ways, to an impending humanitarian disaster in Benghazi. Now at this point, Libya's a failed state, it has been for some time, and its collapse has sent millions of refugees to European shores. It's emboldened nationalists in Europe. In hindsight, was that attempt at a humanitarian intervention a mistake?

Well, first let me just take issue with the idea that this was a personal triumph for me. Using military force anywhere should be nobody's personal triumph. But we were in a situation where the entire world, including the Arab League, NATO, the UN Security Council, were pressing for something to be done to avert what looked like a surefire massacre. I think the challenge is, when there are societies that are so ravaged from within, as Gaddafi had done to the Libyan people — I don't think once the Arab Spring began in that country that you were looking at a potentially re-stabilized society.

And so the decision before us was not, "Is Libya going to be put back together or is there any going back to the pre-Arab Spring moment?" But rather, "Do we have a responsibility, given the number of countries that are calling on us, to act?" So I just question the premise a little bit which is, had the United States not answered the call of the Libyans and of so many in the international community, would Libya look different today? Maybe. We can't run history a second time. But what we, I think, do know is that many, many people would have been killed in that first instance.

But I think what's a tough one about the Libya situation is that former Defense Secretary Robert Gates, he opposed it. Colin Powell has a saying, "You break it you own it." At some point don't you and the Obama administration own a part of the failure of Libya?

One of things I tried to do in the book is to bring people into the Situation Room and have them experience what it was like, including hearing Sec. Gates and his argument. At the same time, of course, Sec. Gates supported the invasion of Iraq and the troop surge in Afghanistan. And so I try to bring you into the room and have you make your own judgment. Absolutely. I think all of us have to ask ourselves, "Would Libya look better today had that not happened?"

Our challenge in the aftermath of NATO's action is that the Libyans said to us, "We don't want any international presence on the ground. None." So I think Colin Powell's saying really does apply. You break it, you fix it. But it was pretty broken at the point at which Gadhafi's forces were at the gates of Benghazi, and I suspect, had we not acted, the questions you'd be posing to me right now would be about why we didn't act in Libya and why tens of thousands of people were killed. These are extremely vexing, wrenching challenges.

You mentioned Syria. At the time of the red line and chemical weapons, President Obama nominated you to become the US ambassador to the UN. You were very outspoken during your tenure at the UN. You were calling out the Assad regime in Syria and its Russian and Iranian backers. In the end, President Obama decided not to attack Syria after the Assad regime crossed Obama's own red line and used chemical weapons. Why are you more outspoken in your book about your criticism of Obama's fateful decision?

I think I'm honest about it. Again, in light of the conversation we just had about Libya, it's extremely risky to be using military force in other countries. This was an instance where, as UN ambassador, I tried to help the president mobilize a large global coalition in support of what he was contemplating, which was very, very limited military action to punish the use of chemical weapons.

So I experienced firsthand the lack of enthusiasm on the part of all the countries of the world really, with the exception of France. But again, these are really tough decisions and what I do in my book is bring people into those decisions and also explain President Obama's side of the story of what it would have been like, absent strong domestic support, absent a global coalition, absent a UN Security Council authorization. The risks of doing something like that were not small.

If a Democrat wins the 2020 presidential election, you'd certainly be on a shortlist for secretary of state. Are you interested in that job?

I'm interested right now in bringing my story of trying to make a difference particularly to young people. I think a lot of people in the world have lost faith that they can do something in light of the magnitude of the problems we face, whether climate change or 70 million displaced people or again the Arab Spring starting and offering so much promise and then collapsing in so many places and so much heartache we’re facing and have been for years, now a human rights recession around the world.

And the temptation is to just say, oh, read another book — "Why Democracies Fail," "Why Democracies Die," "1984." But my feeling when I was ambassador and my feeling to this day is, there's always something you can do. And really, I think more than anything, the lesson the Arab Spring stresses is really the importance of political evolution rather than revolution. Because once revolution occurs, what gets unleashed is beyond the control of most mortals.