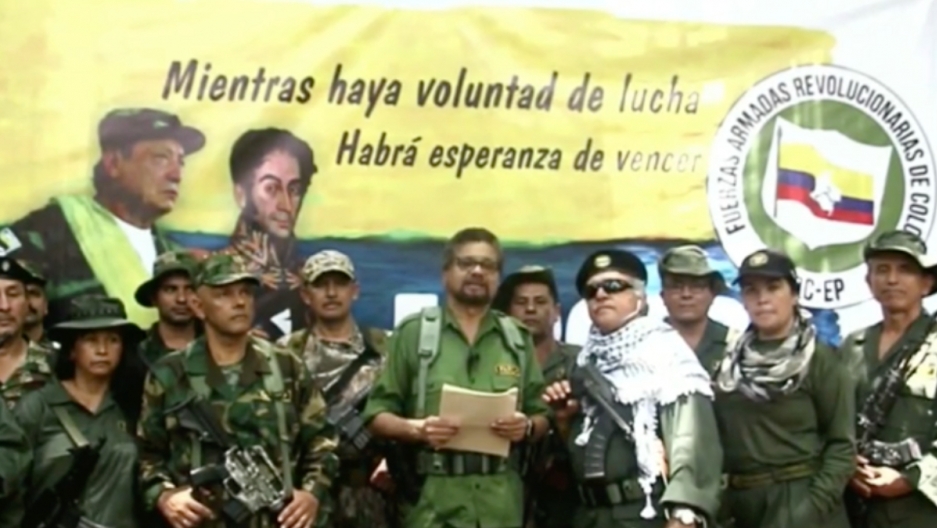 Former FARC Commander Ivan Marquez reads a statement in this undated screengrab obtained from a video released on August 29, 2019.

A group of former rebels from the Revolutionary Armed Forces of Colombia (FARC) announced in a video posted on social media that it will launch a new armed offensive, threatening to resume a five-decade-old armed conflict in Colombia. Former FARC commanders Ivan Marquez and Jesus Santrich, known by their aliases, appear in the 32-minute YouTube video dressed in olive fatigues and surrounded by armed fighters.

"This is the continuation of the rebel fight in answer to the betrayal of the state of the Havana peace accords," said Marquez. "We were never beaten or defeated ideologically, so the struggle continues." The announcement comes three years after the FARC signed a peace deal with the Colombian government.

The group's objective is the installation of a government that will support peace, Marquez said. It will fight corruption and fracking and demand payments from those participating in illegal economies and from multinational companies, according to the announcement.

Marquez was a key negotiator of the 2016 peace agreement. He went missing last year after his nephew was arrested and taken to the United States to cooperate with drug-trafficking investigators. Santrich, whose birth name is Seuxis Pausias Hernandez, is wanted by the United States on suspicion of conspiracy to export 10 tonnes of cocaine.

The announcement, which Marquez said was filmed in the Colombian Amazon, comes amid severe challenges for the complex accord, including the murder of hundreds of former rebels and human rights activists, delays in funding for economic efforts by ex-combatants, and deep political polarization.

Colombian President Ivan Duque was elected on a platform to change parts of the deal but has failed to get congressional or judicial support to do so. He has repeatedly said former guerrillas with a true desire to disarm will be supported.

Duque offered a reward of nearly a million dollars for information that leads to the capture of each of the rebels who appeared in the video. Duque also accused Venezuelan President Nicolás Maduro of offering safe haven to the rebels.

The World's Carol Hills spoke with Fernando Cutz, a US adviser to the Colombian peace process in 2016 and a former director for South America at the White House, for Presidents Barak Obama and Donald Trump.

Carol Hills: Fernando what can you tell us about this ex-FARC leader, Ivan Marquez?

Fernando Cutz: Ivan Marquez was certainly an important figure both for the FARC itself, of course, as one of their key leaders and key dignitaries who would represent actively the FARC internationally. But he was also a key figure for the peace process. He was one of the chief negotiators who was very involved in the negotiations. He was very public and involved when the deal was actually struck and a peace agreement was reached. So this is a very significant moment to have his publicly turning on this whole process.

Has he said why he is turning against the process and calling for people to take up arms?

He did. He cited specific examples of individuals that have been killed. He didn't accuse the government of being behind that, but he said that the government turned a blind eye and was indifferent to the deaths of former FARC members. But I suspect that there's more to it than that. I think there's been a real difficulty on the part of everybody to figure out how to fold former FARC members back into the economy, how do you make them into productive citizens in the licit economy when a lot of these folks have lived their entire lives in the jungle with guns. That's kind of all they know.

What did the peace deal that was struck in 2016 actually say and did it address the economic issues that you're talking about?

Well, it tried to, but it is very controversial. Part of the problem is that in Colombia, if you talk to the average Colombian citizen, they would say, "well, yes, we probably need to spend some money to help these former FARC individuals' to help train them, to help educate them, to help integrate them into society and provide jobs for them. But when there are millions of victims out there, Colombians who have suffered at the hands of these individuals, how can we prioritize giving money to the perpetrators instead of giving money to the victims. So it becomes this controversy where many Colombians are fundamentally opposed to helping the former FARC members in any way, which makes this whole process a lot harder. I think everybody knows deep down that unless you help the former FARC members and unless you provide them with economic opportunities, they won't have much of a choice but to go back to some sort of illicit means. And I think, unfortunately, we're seeing that play out to an extent today.

For the uninitiated how would you explain the FARC rebel group and its relationship with Colombia?

The FARC group has been around for many, many decades and they are, according to the US government, and many others, a terrorist organization. They were fundamentally opposed to the government in the regions that they controlled. They controlled quite a bit of territory in their heyday and while they were originally founded as a means to stand up for workers rights, and to counter poverty and to look out for the forgotten rural folks, they became more of a pretty well-oiled machine and an operation that both controlled and ran large swaths of coca country, essentially a narco-trafficking organization in many ways. They certainly evolved over their decades of existence and it's unclear exactly what they want to evolve into now with this new iteration that Marquez is calling for today.