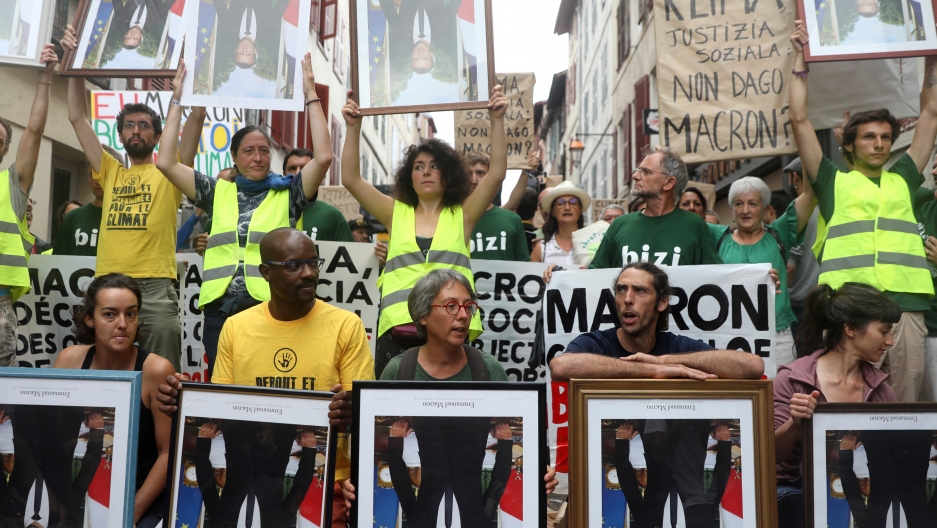 Climate activists hold upside down official portraits of French President Emmanuel Macron stolen from town halls throughout France during a march in Bayonne, near Biarritz, as part of the G7 summit, France, Aug. 25, 2019.

As the three-day G7 summit wrapped up in the town of Biarritz in southwestern France on Aug. 26, French President Emmanuel Macron declared success as he stood next to US President Donald Trump and said the gathering was productive and efficient. Meanwhile, French protesters in the neighboring town of Bayonne carried hundreds of official portraits of Macron turned upside down in protest against his climate change policies.

Nearly 130 portraits had been stolen from various town halls around France.

The unusual protest tactics were part of larger protests in Bayonne, during which French riot police used water cannons and tear gas on Aug. 24 to disperse anti-capitalism protesters.

A police helicopter circled as dozens of protesters, some hurling stones, shouted slogans and abuse at the lines of police in the Basque town's historic center.

Anne-Sophie Trujillo is an activist with the nonprofit ANV-COP 21 that helped organize the portrait protests near the G7 summit this weekend. They believe President Macron is guilty of inaction on climate change. "With this march our aim was to demonstrate that pictures of our President Emmanuel Macron are far from the reality in terms of climate change here in France," said Trujillo.

Related: Europe's latest heatwave is part of a 'new normal'

Marco Werman: I think a lot of people will be surprised — often, Macron has been thought of as a leader who is very tough on climate change and bringing action forward. Where has he fallen short in your opinion?

Anne-Sophie Trujillo: There are nice pictures but the solutions are not there. We do have ... correct targets for 2050, but since the Paris agreement was signed four years ago, all our indicators are in the red. We don't have enough local measures in terms of renovation for the development of public transportation, for instance, ... on aviation. We need action to reduce aerial transportation, we do need to have more rail transportation. We have a solution that exists but the government is deaf — never at the local level, at the national level, taking steps that have to be done to reduce our carbon dioxide emissions that are raising up and up in France. And so we will never meet our... objective in 2050. We need now no more "blah blah," no more speeches between actions.

The march itself is being called Le Marche des Portraits — The Portraits March — because of the portraits of President Macron that you were carrying while you were demonstrating holding them upside down. Where did those come from and why were they necessary?

We have decided to remove the portraits from the town halls because of the legal recourses that have been made by Greenpeace and other organizations against France, because the government is not doing enough for action to tackle climate change. So we have this campaign of décrochons Macron. We have [taken] more than 120 portraits. We are on trial for that. There are more than 18 trials that are taking place in France.

Yes, it's décrochons Macron — that's like, take down Macron. You're literally doing that by taking these portraits off the walls. They were stolen and you're going to trial for this. Is it worth it?

Yes, it is. Definitely. I think it is because we are demonstrating without violence. The coverage has been very good. On Sunday, for the march, more than 900 persons were there responding to our call. They came with empty frames. Police did not intervene. And we are capturing the public attention.

Notably, President Trump was not at that climate change breakout meeting of the G7 and he's still downplaying the effects of climate change. In fairness, shouldn't you also be carrying upside down Trump portraits?

Maybe we should — if we can get some.

Editor's note: This interview was edited and condensed for clarity. Reuters contributed to this report.