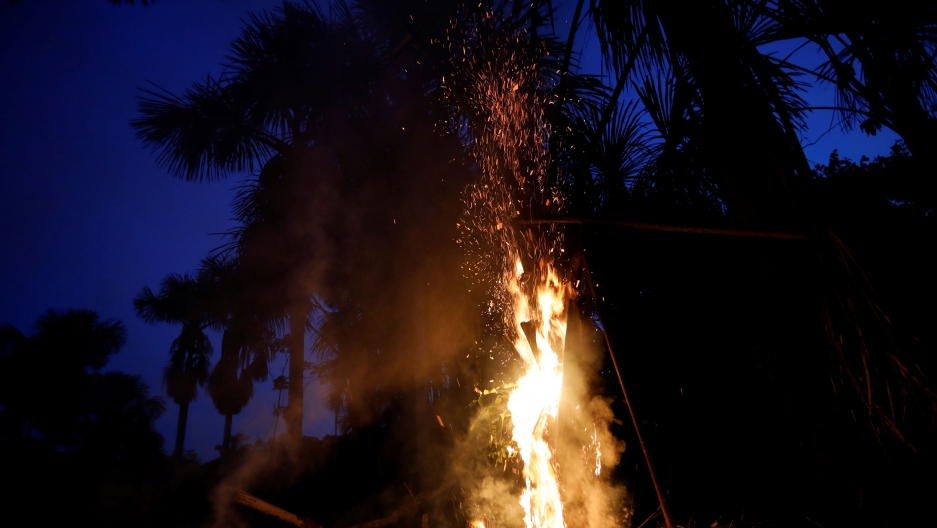 A tract of the Amazon jungle burns as it is cleared in Iranduba, Amazonas state, Brazil, on Aug. 22, 2019.

Amid growing global condemnation, Brazil's President Jair Bolsonaro said on Friday he may mobilize the army to help combat a record number of fires sweeping through the Amazon rainforest.

The Trump administration said it was "deeply concerned" about the wildfires and European leaders ratcheted up criticism of Brazil's handling of the crisis, which now looks set to be discussed at a summit of G7 leaders in France this weekend.

French President Emmanuel Macron's office went so far as to accuse Bolsonaro of lying when he downplayed concerns over climate change at the G20 summit in June, and said that France would now oppose the farming deal struck in June between the European Union and the Mercosur countries of Brazil, Argentina, Uruguay and Paraguay.

Stung by the international outcry, Brazil distributed a 12-page circular, exclusively seen by Reuters, to foreign embassies, outlining data and statistics defending the government's reputation on the environment.

Having first dismissed the fires as natural, then blaming nongovernmental organizations without evidence for lighting them, Bolsonaro struck a more serious note on Friday, saying he would summon top cabinet members to tailor a response.

Related: Indigenous tribes are the last best hope for the Amazon

Asked by reporters in Brasília if he would send in the army, he said, "That is the expectation."

A government spokesman in Germany called the wildfires "shocking and threatening, not only for Brazil."

The World's Marco Werman spoke to Oliver Stuenkel, a professor at the Getúlio Vargas Foundation in São Paulo, about the global and Brazilian reactions to the fires.

In Brazil, I would say there's been, of course, a mixed response. I mean, the government, in particular, is very much aligned with a traditional way of thinking about the Amazon, very much in terms not of climate change, but actually in terms of sovereignty, protecting the forest not from destruction, but actually from outside intervention. So, there's a long-standing fear and now this has come to the fore again, and the president of Brazil, Bolsanaro, has been very clear to reject any kind of criticism and saying: "This is part of a conspiracy." He also questions the data that actually the Brazilian government itself has produced on deforestation, which has led to the ouster of one of the scientists who has led this effort. The opposition, of course, has been very critical of Indigenous populations and interestingly enough, agribusiness is very worried because there is a growing consensus among economists, among politicians that this situation may actually lead to consumer boycotts against Brazilian products. But the president, so far, has been very clear that he is unwilling to take more active action against climate change. Bolsanaro himself does not believe in climate change.

"This has never happened before that the international community considers the environmental policy of one particular country a national security threat. And I think the government of Brazil is, for the first time, facing this international backlash."

Are you able, though, to draw a line directly from his policies to the massive wildfires we're seeing right now?

I think there's two sets of things. The first is, he has actively undermined the bureaucracy that previous governments had set up to monitor deforestation, to disincentivize deforestation, to punish illegal logging. He's openly questioned the rationale behind these policies, but it's just one element. I think the wildfires are a symbol of a much larger problem that, at this stage, this government in Brazil is unwilling to invest in protecting the Amazon. So, in that sense, the deforestation has been increasing massively over the past eight months. And I think worse is to come — I mean, a lot of this is just beginning now. And this is a new chapter in international relations. This has never happened before, that the international community considers the environmental policy of one particular country a national security threat. And I think the government of Brazil is, for the first time, facing this international backlash. At this stage, I don't expect Brazil's climate policy to change in the near or medium term.

Meanwhile, the fires continue to burn and the skies are just filled with smoke. What plans does the Brazilian government have right now to fight and contain these fires?

The government has set up a crisis committee, but that's more in reaction to the international outcry. The government will, of course, seek to reduce the impact that's visible to the entire population. Last week, in Sâo Paolo, we had dark skies. It felt like it was nighttime at about 2 p.m. suddenly because there was clouds mixed with ashes from the forest burning, and this was a very powerful moment when a lot of people just looked up and said: "Why is it dark?" This brought this home to many people, and even though local governments can, to some extent, address this situation, I'm quite pessimistic that without the help of the federal government, Brazil can make much progress on this front.