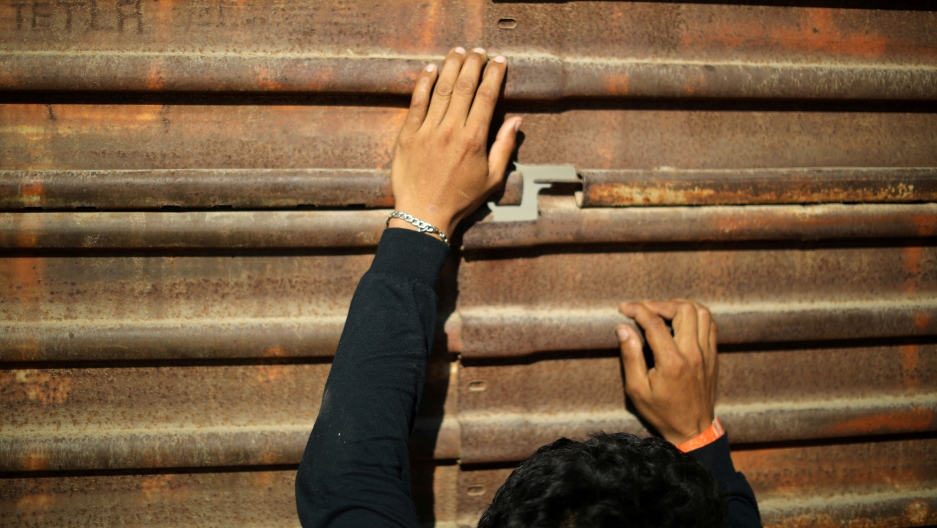 A migrant, part of a caravan of thousands traveling from Central America en route to the United States, tries to look at US border patrol officers through a hole in the border wall between the US and Mexico in Tijuana, Mexico, on Nov. 25, 2018.

The Trump administration on Wednesday unveiled a rule that allows officials to detain migrant families indefinitely while judges consider whether to grant them asylum in the United States, abolishing a previous 20-day limit.

The rule, which is certain to draw a legal challenge, would replace a 1997 court settlement that limits the amount of time US immigration authorities can detain migrant children. That agreement is generally interpreted as meaning families must be released within 20 days.

It was the Republican administration's third major regulation restricting immigration in little more than a month, all during an unsettled period when senior immigration officials hold "acting" titles lacking US Senate confirmation.

Trump has made cracking down on legal and illegal immigration a hallmark of his presidency after campaigning in 2016 on a promise, so far unfulfilled, that Mexico would pay for a border wall to keep migrants from entering the United States.

Immigration officials are looking for any kind of deterrent to reverse a record surge in families fleeing violence and poverty in Central America. Department of Homeland Security (DHS) officials say they have caught or rejected 475,000 family members in the past 10 months, more than three times any previous full year.

On July 15 the administration unveiled a rule to bar almost all immigrants from applying for asylum at the southern border, and on Aug. 12 it announced regulation denying visas and permanent residency for those who fail to make enough money.

The administration framed the policy as a humane approach to a crisis.

"To protect these children from abuse, and stop this illegal flow, we must close these loopholes. This is an urgent humanitarian necessity," Trump said in a statement.

Critics counter that Trump and Stephen Miller, his aide on immigration, are using a series of heartless policies to animate hard-core political supporters.

"The administration is seeking to codify child abuse, plain and simple," House Speaker Nancy Pelosi, a Democrat, said in a statement, adding that she expected a federal judge would strike down the new rule.

Mexico's Foreign Ministry expressed concern over the plan, saying in a statement that it would consider legal action.

Pediatricians have said children may suffer numerous negative physical and emotional symptoms from detention, even if only brief. The American Psychoanalytic Association on Wednesday branded the Trump policies as "psychological warfare."

"It has become clear that the current administration uses cruel language, policies and abuse with the objective of deterring immigrants and asylum seekers," said Lee Jaffe, president of APsaA.

Officials said the families would receive mental health treatment and other services in facilities that are held to high standards of care.

Robyn Barnard, an attorney for the nonprofit organization Human Rights First, challenged that characterization, saying that just because a facility is in a pastoral setting does not make it more humane.

"A gilded cage is still a cage," Barnard said. "There are locks on the doors, there is no freedom of movement. It is for all intents and purposes a prison."

The latest action tears apart the Flores Settlement Agreement that had placed limits on how long children of families seeking asylum could be held in detention, enabling the US government to release tens of thousands of families pending the resolution of their cases.

Trump officials had blamed Flores for the spike in immigration, especially of Central American families, saying it encouraged migrants to bring children with them so they could be released into the United States pending their court cases.

Families typically wait several months for their cases to work their way through immigration court, and the new rule would allow the DHS to keep those families at detention facilities.

Bill Ong Hing, professor of law at the University of San Francisco and director of the Immigration and Deportation Defense Clinic, has defended the Flores settlement in court for more than a decade. He spoke to The World's Marco Werman about the rule change.

So what do you think of this rule change?

Well, I think it exacerbates the problem because the conditions at detention centers are terrible from health and safety to the lack of adequate medical care. And so this would just make things worse to be able to continue the detention of family units much longer than 20 days.

So removing Flores — I mean the basic tension, of course, is a position of the White House trying to restore integrity, it says, to the immigration system that if you enter the US without papers you will be locked up until processed. I mean, what is wrong with that?

Well, what's wrong with that is that it really ignores why people are entering the United States, why they're fleeing their home countries. And it ignores the fact that this is more of a regional crisis and it's about people fleeing violence in all different forms and to greet those individuals with a prison cell — that just lacks any aspect of humanitarianism.

It is understandable why migrants are fleeing their countries, the violence to start with. And you can't really blame them for exploiting the loopholes to get into the US and the Flores settlement can be seen as a giant loophole. When there is such a massive influx and backlog of migrant cases here, what is the alternative?

It worked before. You process these individuals. They all know where they're headed. They often have relatives, friends in the United States already and that's where they're headed. And in the past, prior to 2014, it worked. People would go to those places, they were told they had to report to deportation officers, they had to report to immigration courts and they largely did, at more than 90% appearance rate. It works. Catch and release works. That's the more humanitarian way.

So, I don't view the Flores settlement as a loophole because people don't always come with their children.

Your work is focused on protecting the Flores settlement. What can you do to protect it now?

Well, the litigators are going into court, probably either tomorrow or early next week, arguing that the proposed regulation violates the stipulated agreement that was entered into 22 years ago and the court will determine whether or not what is being proposed is consistent with what the court approved in 1997.

Do you think this plan of indefinite detention will actually ever be implemented given all these legal hurdles it's going to face?

We don't know what will happen at the lower court or the higher courts but if the court is going to be true to the spirit and the letter of the agreement, which is to expeditiously reunify folks with their relatives in the United States, I don't see how the regulation will stand.