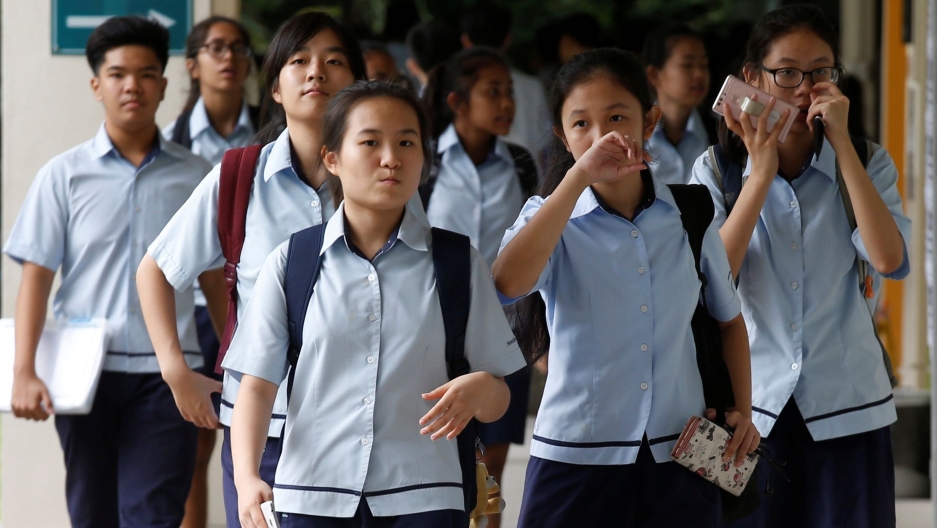 Students leave for classes after their recess at a secondary school in Singapore, Oct. 27, 2016.

Singapore takes education seriously. Its school system has been ranked as one of the best in the world. But rankings for Singaporean students — fifth and sixth graders — will soon be a thing of the past. The government plans to put a stop to its system, following reports of suicides among students and overwhelming psychological and physical stress.

Symptoms include "depression, [a feeling of] helplessness, fear, anger, irritability, and a lack of motivation," Anoushka Beh, a child psychologist in Singapore, told The World's host, Marco Werman.

Marco Werman: Explain the ranking system first of all, Anoushka. How does it work?

Anoushka Beh: Well, students take [a test] when they are in their sixth year of formal primary education and they get an aggregate score. Once this is achieved, then it determines what secondary school they're streamed into. So, you can imagine, it's very important in a culture where tests are considered a very high priority.

So, what are your thoughts on Singapore schools no longer using this exam ranking system on young children?

It comes off the back of a change in sentiment, which is very much an emphasis on the joy of learning, which I can tell you wasn't prevalent when I was growing up, going to local school here, which I did for some years.

So, what led to this change in Singapore?

If you look at some of the statistics there, have been increasing instances of kids speaking out about stress levels. You're looking at an average of 2,400 new cases at their clinics each year, [according to] the IMH, the Institute of Mental Health in Singapore. These are new cases of students coming in because of school-related stress. You have instances of very, very, very sad cases ... I think there was a case in 2016 of a young boy who committed suicide. He jumped from his 17th-story apartment after failing his midterm exams and being incredibly frightened to tell his parents.

How much does that anxiety then extend to affecting the physical health of the children?

It's a really good question. Anxiety is twofold — what you have is an impact on the child's emotions, so you may have children who present with depression, helplessness, fear, anger, irritability, and a lack of motivation. On a physiological level, though, because the body is essentially perceiving that there's a threat — this threat can be the threat of failure — the body goes into fight-or-flight. What you can experience is a racing heartbeat, sweating, sleep disruption, panic attacks, difficulty concentrating, and, in the long term, adrenal fatigue. So, it's very damaging on a physiological level.

So, what would you want to see that suggests that this move to drop exams is more than just letting them off the hook?

To be clear, it's not that I don't endorse it — I do. I just feel that there is perhaps a bigger shift that's required. I went to local school in Singapore for 10 years. I then shifted into an international school and went to America for university. And it wasn't until I went to the United States that I understood the joy of learning that is really at the heart of why we go to school. And that's essentially to learn and not purely about how you're performing on a test. Now, obviously, the shift away from taking tests to evaluate students is an important thing that's happening. But that shift also has to occur in the hearts and the minds of people on a cultural level.