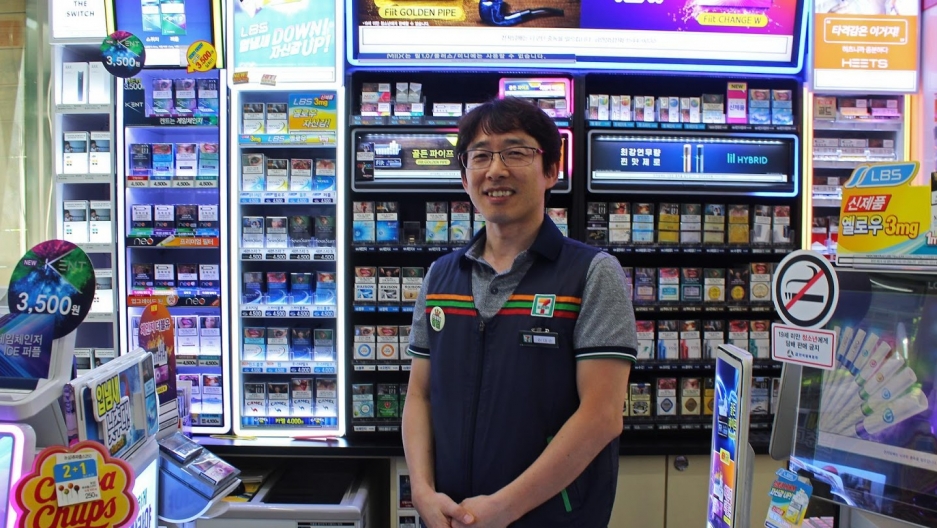 Lee Sang-joon, the private owner of a 7-Eleven convenience store, poses for a photo behind the counter of his shop. Lee has been in the convenience store business for more than 15 years, and switched to 7-Eleven two years ago, before the “No Japan” boycotts.

From early morning to late night, Lee Sang-joon stands under the fluorescent lights of his self-owned 7-Eleven, in Bucheon, a satellite city of Seoul, South, Korea, ringing up customers as they bring beers to his counter or request cigarettes from the back shelf. Lee has owned and operated different franchise convenience store brands for more than 15 years now, but these days, he’s run into bad luck.

That’s because thousands of South Koreans have started boycotting Japanese brands since early July, when the Japanese government abruptly decided to restrict exports of three chemical products used by South Korean companies to make cell phones and electronic displays. 7-Eleven is an American company, but many South Koreans have reportedly mistaken it for a Japanese one.

The restrictions — which essentially delay the process of exports to South Korea — has exploded into a national rallying cry against Tokyo under the campaign name, “No Japan.” The controversy comes just weeks before South Korea’s National Liberation Day on Aug. 15, which celebrates the official end to Japanese rule.

The conflict is complicated, but it goes something like this: South Koreans believe that Japan is retaliating after the Korean Supreme Court ordered Japanese firms to compensate still-living Koreans who were forced laborers during World War II. Meanwhile, Japanese Prime Minister Shinzo Abe’s administration claims that these forced labor disputes have nothing to do with it.

For Lee and his convenience store, that complicated story translates to lost sales.

“My business has been hurt by the boycotts, and it seems to be ongoing. I started feeling it around the time ‘No Japan’ started. ... I can still survive, but specific products are definitely being boycotted. Japanese beers and alcohol sales are going down a lot.”

“My business has been hurt by the boycotts, and it seems to be ongoing. I started feeling it around the time ‘No Japan’ started,” he said, making a habit of smiling and waving to customers as they passed by. “I can still survive, but specific products are definitely being boycotted. Japanese beers and alcohol sales are going down a lot.”

It’s no secret that Japan and South Korea have a long history of tension. Japan invaded Korea in 1910 and ruled over the peninsula — often brutally — until 1945, and the nation’s past use of Korean forced laborers and “comfort women” (sexual slaves) is a highly sensitive issue. Many South Koreans are unsatisfied with previous apologies from the Japanese government, and some believe that Japanese corporations must repent by paying out victims.

This conflict has been going on for decades, but the past few months are somewhat uncharted territory for the two countries, which have nevertheless enjoyed robust trade.

In June, the Seoul High Court ordered Japan Iron and Steel Company to pay out roughly $86,400 each to seven South Koreans who were forced to work 12 hours per day between 1942 and 1945. Just a few days after the ruling, Japan announced its export restrictions, citing “national security concerns.” The chemicals exported by Japan can also be used to create weapons, and Japanese officials were reportedly concerned that South Korea might somehow supply these chemicals to North Korea. Seoul vehemently denied these accusations.

“There are no grounds for Japan’s national security argument. ... Japan did not specify what kind of evidence they have [to suggest] a problem with national security and the Korean government or Korean companies ... This appears to be about the forced labor dispute.”

“There are no grounds for Japan’s national security argument,” said Sohn Kiyoun, a professor of international trade at Incheon National University. “Japan did not specify what kind of evidence they have [to suggest] a problem with national security and the Korean government or Korean companies ... This appears to be about the forced labor dispute.”

South Koreans began their “No Japan” campaign by building a mobile app and website that points out Japanese products, brands and Korean alternatives.

The impact has been huge: So far, more than 200 supermarkets and grocery stores in South Korea have pulled Japanese items off their shelves, while Japanese beer sales have dropped between 21-24% at two major convenience store chains, according to Reuters. Toyota sales are down 32% compared to last year, with Honda down by 34%. Uniqlo — a Japanese clothing brand — has reportedly suffered a 40% drop, and a recent poll suggests that six in 10 South Koreans are currently participating in the “No Japan” boycott. 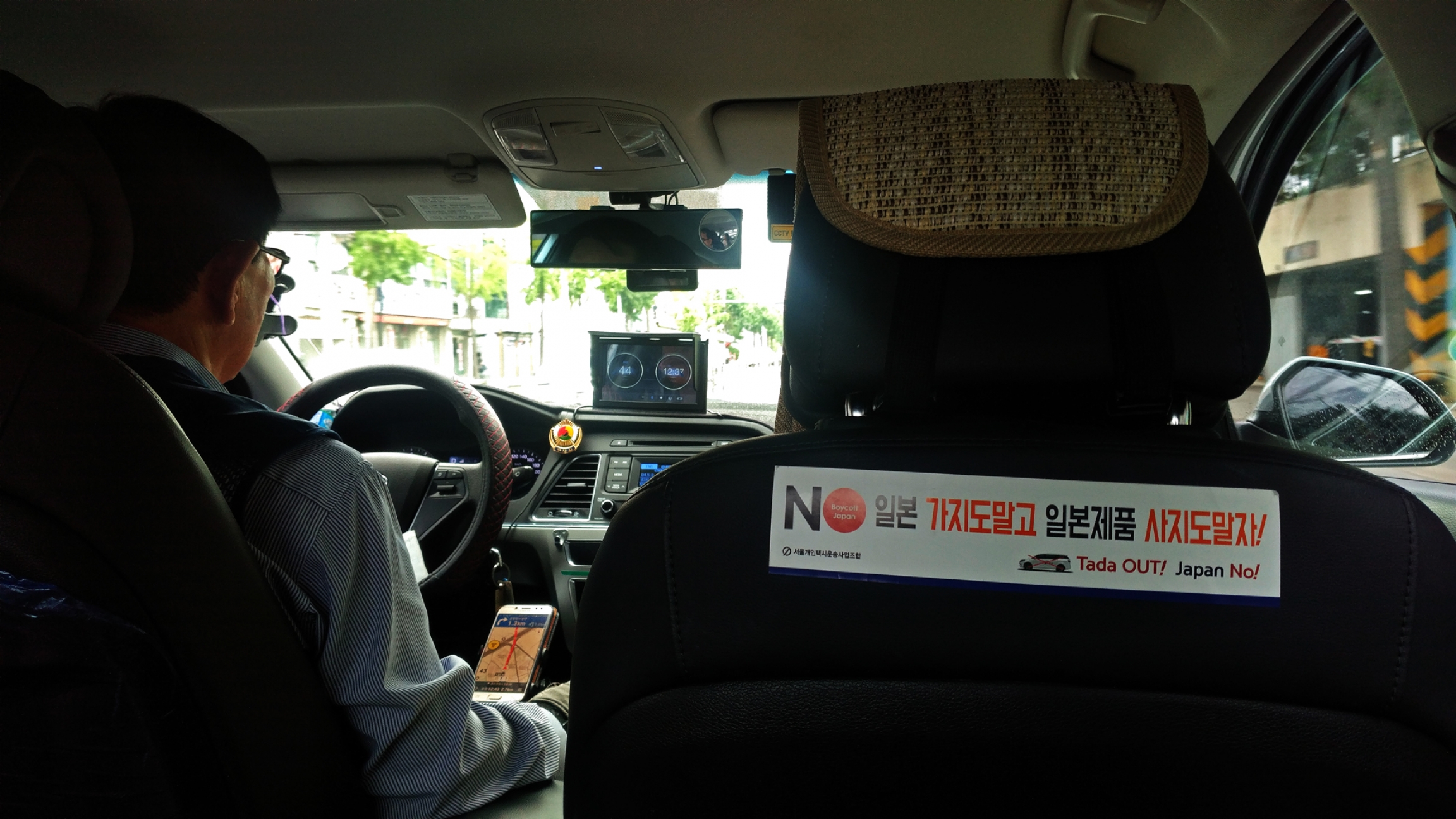 A sticker inside a Seoul taxi cab urges riders not to use Tada, a Japanese ridesharing app. The sticker says, “Don’t go to Japan and don’t buy Japanese products” in Korean.

At the same time, some South Koreans have received backlash for taking their frustrations out on Japanese tourists and immigrants — one restaurant in Busan, for example, reportedly put up a sign that reads, “No Japanese people allowed inside."

“The impact seems very large,” Sohn said. “I think this current customer boycott campaign could be more far-reaching than what the Japanese government originally expected.”

One Japanese dessert shop — which asked to remain anonymous, for fear of losing even more sales — said their customers have dropped an estimated 25% during July. The business owners told The World that they don’t personally agree with Japan’s export restrictions, but are “afraid to comment because, already, so many Koreans have decided to shop elsewhere instead.”

Lee, who switched his convenience store to a 7-Eleven two years ago, said that many customers don’t understand that his business isn’t actually Japanese. In reality, Korean 7-Eleven stores are run by Korea Seven Co., with Korea’s Lotte Corporation holding nearly 80% of shares. The misconception has reportedly cost many Korean franchise owners during the “No Japan” boycotts.

“Customers have come up to the counter and complained to me about carrying Japanese products. Others believe 7-Eleven is Japanese and don’t shop there,” Lee said. “All of the Japanese items I have here are leftovers. Once I sell them all, I am not going to order any more. I am also going to participate in the boycott.” 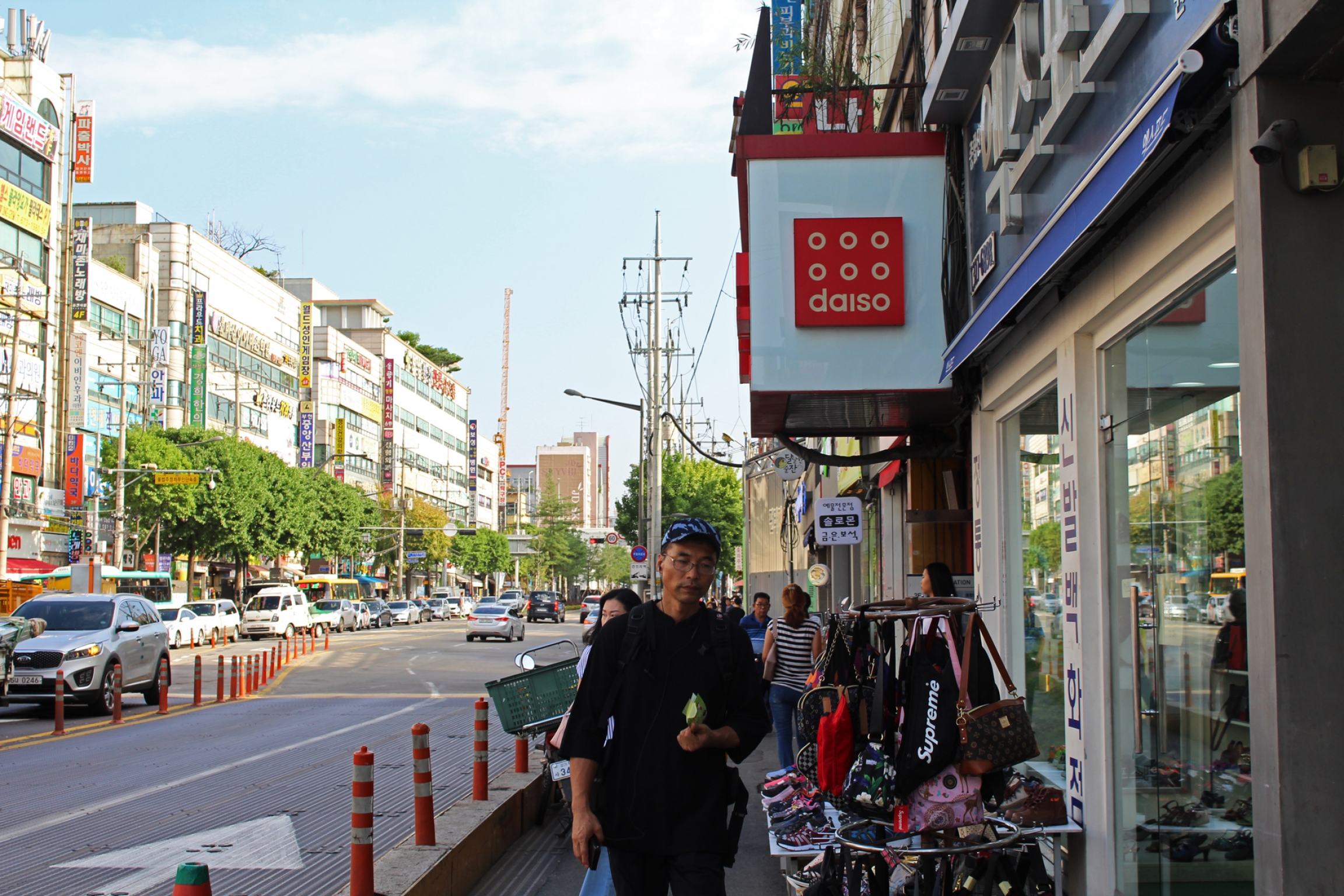 South Koreans walk past the entrance of a Japanese Daiso store in Bucheon, a satellite city of Seoul.

The future of relations between South Korea and Japan might continue down a rocky path. On Aug. 2, Japan officially removed South Korea from its white list — a group of countries typically given preferential treatment on trade. Meanwhile, South Korea is floating the idea of removing itself from the General Security of Military Operations Agreement or GSOMIA, an intelligence-sharing agreement also involving Japan and the United States. The GSOMIA was signed in November with the intention to contain intense provocation from North Korea.

Related: Why Trump failed to get North Korea to give up its nuclear weapons

Japan’s foreign minister responded in July by penning an editorial in favor of keeping GSOMIA and cooperating with South Korea on security matters.

“I think that’s a good move for South Korea’s side,” Sohn said. “The Japanese government has so far responded to the potential threat of withdrawing from GSOMIA. That means they are paying attention and recognize the value of it.”

Nearly half of South Koreans surveyed support ending the country’s participation in GSOMIA, according to a recent poll, but doing so would certainly escalate the trade spat. Japan made an attempt to backtrack from tensions on Aug. 8, when it approved its first shipment of semiconductor materials to South Korea since it first imposed restrictions a month prior.

“The Japanese government is trying to find a way to exit this dispute,” Sohn said. “But the North Korea nuclear issue might also eventually make Japan, South Korea and the United States more nervous, and maybe all three will make a concerted effort to [work together] again ... That kind of diplomatic or political problem could play a role in resolving this economic issue.”