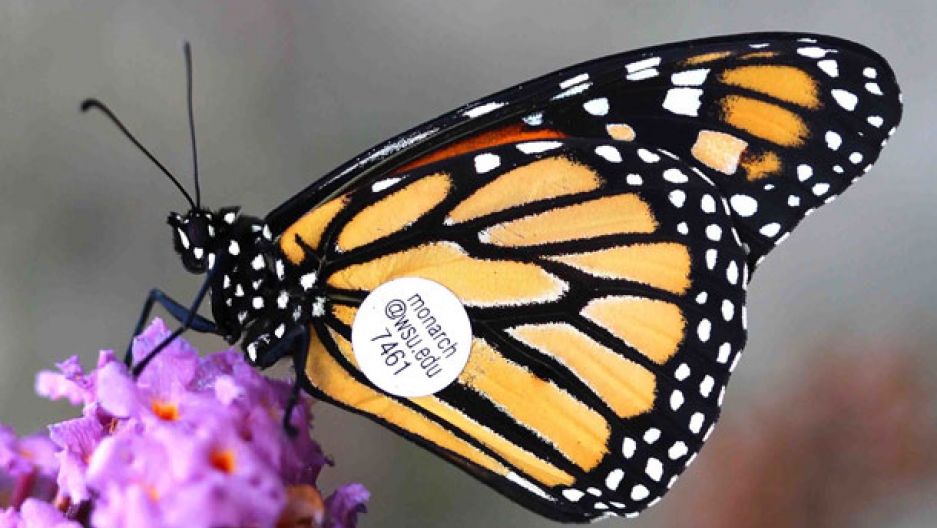 To keep track of Monarch butterflies’ migratory paths, groups like the Monarch Watch tag the butterflies.

Raising monarch butterflies, arguably the most familiar North American butterfly species, in your home or backyard is an enjoyable, educational activity and can help sustain the monarch's population — but, according to a new study, there are a few things you must do right if you truly want to help.

Each spring, Eastern monarch butterflies wake up in the mountains of Mexico and make their migration to warmer climates, like Texas, where they breed and die. The Texas monarchs travel a few hundred miles further north, where they also breed and die.  It takes four or five generations of monarchs to reach the northern end of its range, perhaps as far north as Canada, where a super-generation is born that will fly all the way back to the same mountain in Mexico where its great-great-great-grandparents started the journey.

Citizens concerned about sustaining the monarch population enjoy helping out by breeding butterflies themselves, but the new study from the University of Chicago finds that captive-bred monarchs are not as likely to complete their essential return migration to Mexico.

Chip Taylor, director of Monarch Watch, says the study does not suggest people should stop trying to help the monarch by raising them at home. Rather, it should be used to inform people about the best way to do it.

Most people who rear monarchs on their own are invested in what Taylor calls “monarch rescue.” Ninety-eight percent of all monarch eggs laid in the wild never become adult butterflies because they are subject to predation, parasitism and other hazards, he explains. So people search for eggs in their backyard or they scour parks and other natural areas to find eggs and bring them home, in the hope that they will be adding to the monarch population.

"Rear these butterflies in a way that they have some prospect of not only getting to Mexico, but surviving the winter, surviving the trip back north to Texas, and surviving [long enough] to reproduce.”

“You will if you do it right,” Taylor says. “But, if you don't do it right, you're not going to be adding to the population. So, we're trying to encourage people to do the right thing: Rear these butterflies in a way that they have some prospect of not only getting to Mexico, but surviving the winter, surviving the trip back north to Texas, and surviving [long enough] to reproduce.”

Taylor recommends keeping monarchs on a screened-in porch or someplace similar, where they will be exposed to normal day/night light exposure and temperature variations. Feed them with either cut leaves or live plants, but if you use cut leaves, they must be really fresh and changed out often. He further suggests keeping them in an aquarium or a cage, rather than a jar or something too small and keeping this temporary home clean.

“This is not a hard thing to do and it's kind of fun,” Taylor says. “I've been doing it since I was a kid. I've really been doing this for a very long time ... We don't want to discourage people from doing it. But we'd like to have people do it in the best possible way.” Taylor also recommends tagging the butterflies and, most importantly, releasing them at the right time, which is at the beginning of the migration season.

While tagging a tiny butterfly may sound daunting, Taylor says it is not. “Monarchs are pretty sturdy butterflies,” he says. “We have instructions on our website. … We teach people to put the tag on the discal cell, which is a large palm-shaped cell on the underside of the hind wing. It's a tag that weighs about a fiftieth of the mass of the butterfly and every tag has a different code.”

Monarch Watch enters all the tag information into a database, which allows them to trace a recovered butterfly back to where it began its migration. When people send Monarch Watch a datasheet, the organization can use the data for every tagged butterfly as a way of tracking a particular migration, to see whether it is early or late, et cetera. By putting all that information together, they can find out whether butterflies tagged in Massachusetts have the same possibility of getting to Mexico as, say, butterflies tagged in Buffalo, New York, Taylor says.

Uppermost in Taylor’s mind is the global climate crisis, and monarch butterflies, he says, are a way of connecting people to environmental issues.

“Monarch butterflies are valued by a lot of people,” Taylor notes. “They're recognized as a symbolic organism that tells us a lot about what's happening in the environment. If we can connect with something that's of value that will probably be lost, then maybe we can get people’s attention.”