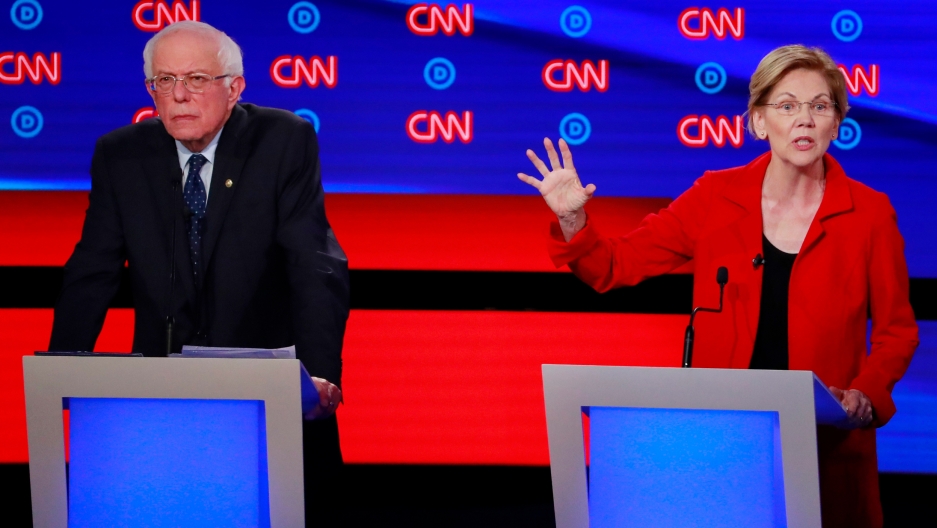 US Sen. Bernie Sanders listens as US Sen. Elizabeth Warren speaks on the first night of the second 2020 Democratic US presidential debate in Detroit, Michigan. Both senators defended their support of "Medcaid for all" against more moderate candidates.

The Trump administration took a step Wednesday toward allowing import of medicines from Canada, an action the president has advocated as a way to bring cheaper prescription drugs to Americans, but the pharmaceutical industry was quick to resist the move.

The US Department of Health and Human Services (HHS) said it and the Food and Drug Administration will propose a rule that will allow it to authorize states and other groups to pursue pilot projects related to importing drugs from Canada.

The agency also said it would allow drugmakers to bring drugs that they sell more cheaply in foreign countries into the United States for sale here, an option the companies are unlikely to embrace.

And on Tuesday night, the first night of the second Democratic debate spent 45 minutes discussing the American health care system. US senators Bernie Sanders and fellow progressive US Sen. Elizabeth Warren squared off against lesser-known and more middle-of-the-road rivals who made the case for a healthcare "evolution, not a revolution."

Related: Migrants have been called health risks for centuries. They aren't.

Sanders pointed at Canada as an example of better healthcare.

"Five minutes away from me and John [Delaney] is a country, it's called Canada," he said on Tuesday. "They guarantee health care to every man, woman and child as a human right. They spend half of what we spend. And by the way, when you end up in a hospital in Canada, you come out with no bill at all. Health care is a human right, not a privilege. I believe that, I will fight for that."

So, is Canada truly the answer to a better system? The World's Marco Werman spoke to Karen Grepin, a health system specialist from Ontario, who explained the history of Canada's system.

"So, in Canada, rather than having a single national health care system, we actually have 13 provincial and territorial health care systems," Grepin explains. "So, that might be something that people don't fully realize. It's not a national system. And so, as a result, there's actually quite a lot of variation across the provinces in terms of how things are done."

She also pointed out that Canada isn't strictly a single-payer system.

So, if there's some promising experimental trial drug that could stave off cancer for a couple of years and it costs thousands of dollars, who pays for that?

Karen Grepin: No, I think it's actually harder to be able to say that one does things better than the other. All of them, for example, have limited coverage of pharmaceuticals. So, we actually have no drug coverage, a sort of entitlement level, anywhere in Canada. And so that means that there are important gaps and just how big those gaps are may vary from province to province. What keeps the system together is there are sort of basic rules that outline what the minimum standards must be and those minimal standards don't actually differ that much across the provinces.

So, in theory, those would be paid for out-of-pocket. So, we don't have a lot of access to pharmaceutical drug coverage in Canada. So, the drug costs would be largely paid for by people out-of-pocket, but we have other controls in place that would limit the amount that drug companies can charge for those drugs. So, we wouldn't necessarily see the same really, really high out-of-pocket levels across the different provinces because of other mechanisms that are put in place and those things do also vary from province to provinces. So, it's ultimately up to provinces to decide how they would put those things in place.

Has health care always been like this in Canada?

In 1984, we passed the Canada Health Act. And so, when I'm referring to the health care system today, I'm basically referring to a health care system that was based on those minimum standards that were introduced in 1984. Prior to that, there was much less coverage. In fact, it wasn't until sort of the 1960s that we even started to see any level of health insurance coverage for the hospitals and physicians across provinces.

So, if I'm sick and I can't get in to see my doctor, what happens if I go to the ER for like something I suspect might be the flu?

What are the minimum standards in Canada?

So, the basic minimum standards are sort of concepts or ideas. These tend to have more of an ideological bent to them. So, for example, universality: If you are a resident or a citizen of Canada, you are entitled to coverage. So that's a very basic minimum standard. What that coverage might be can be different but everybody is covered. There are also ideas like, for example, if you live in one province, you can go to another province and get care and, for the most part, there is comprehensive coverage of hospital and physician services.

So, you will get treated. You may have to wait a really long time, but in theory, they will treat you there. You would be covered for those services.

As you said this all started kind of in 1984. So, what came before 1984 and what prompted in Canada what we kind of know today as universal coverage? Does the origin story look like what the US is currently facing?

I mean, the stories obviously differ. Up until the 1950s, there wasn't a lot of coverage of anything anywhere in Canada. There was a lot of innovations happening in a province called Saskatchewan. There is a premier at the time, Tommy Douglas, who was very concerned about citizens of Saskatchewan suffering undue financial hardship because of having to access the hospital. And so he made it a big push, a big mandate for him to ensure that these costs were covered. And so, for example, he introduced the first hospital insurance scheme anywhere in Canada. A couple of years later that was expanded to also include physician services. So, in addition to inpatient, you would also get outpatient coverage of services. And different provinces were doing things differently. And so, there was a sort of variation across the provinces in terms of how much coverage that they were giving for these different things.

The federal government became interested in ensuring at least the provinces were doing more. So, the federal government has no mandate to provide health insurance in Canada but they felt it was important to do something about it. And so there was a push for the federal government to try to encourage provinces to do something about that. That led to cost-sharing. So, they would say, "Well, if you introduce health insurance in your province, particularly for hospitals, we'll pay for half. And so they incentivized the provinces to take on these different levels of coverage across the provinces. But it didn't necessarily have to be uniform. It was only in 1984, when this Canada Health Act was passed, was the idea that things these minimum standards had to be enforced everywhere and they needed to have a sort of model to base this on. And, in fact, it was the Saskatchewan models [that] were the ones that were largely adopted and now serve as the basis of what health care looks like in Canada.

It sounds a little like Medicaid. Help us understand why some people in Canada need or opt for private insurance?

One of the ideas of comprehensive coverage is that if things are "medically necessary" then they need to be covered for by public services. However, if they're not "medically necessary," then there can be private insurance to cover those things. Back in 1984, paying for drugs was not a big deal. There was a very different patent law system in place. Drugs were not very expensive. Canada did a lot of generic production of drugs and, as a result, they were not included under what's known as "medically necessary." Nor were things like private hospital rooms or physiotherapy or even mental health services. And so those things are not covered under the Canada Health Act and therefore not typically paid for through the public purse. And so, as a result, there's a need to cover those services and so there are pretty high levels of private insurance coverage across Canada. Most working-age adults will get it through work or have access to it through some other mechanism, and that pays for the lion's share of those types of services for that covered population.

You're an economist and a big question when it comes to health coverage is who pays for it? In the US, it makes up nearly one-fifth of the gross domestic product. Are universal health care systems like the one in Canada a lot cheaper?

Absolutely. The system in Canada is roughly about half as much on a per capita basis as it is in the United States. So, we spend roughly half as much. I mean, at the end of the day, ultimately, it is households that pay for every single cent of health care whether it comes directly out-of-pocket or through taxes. It is people or individuals who pay for it. But as a result of the fact that our system is largely universal and that means people don't switch plans all the time or have more of a system that controls the cost in the system. As a result, we pay about half on a per capita basis as they do in the United States.

So, you've lived in the US. Would you hold up the Canadian model for the US as it looks to improve the system here, and after a cost-benefit analysis, would it be an improvement?