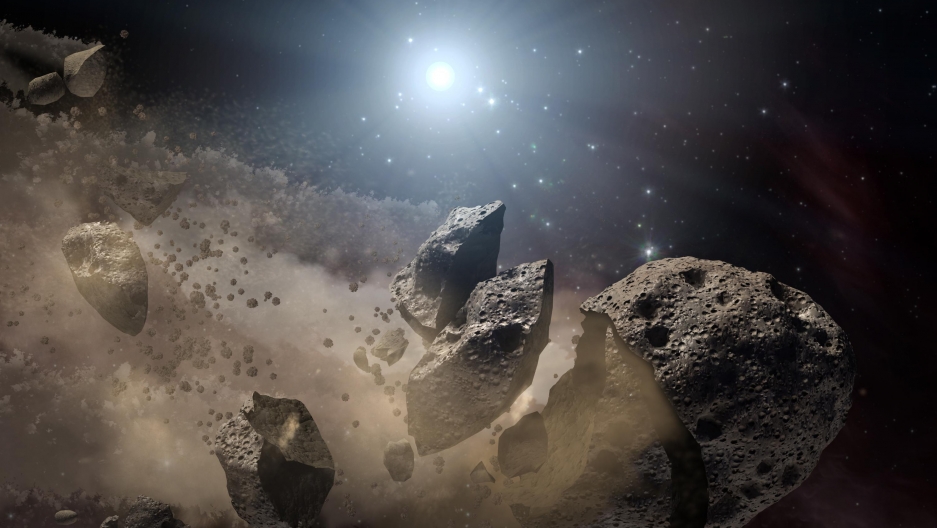 A NASA artist's concept of a broken-up asteroid.

Earth had a near-miss incident with a large asteroid on Wednesday. The fast-moving asteroid measuring about 100 meters in diameter edged closer to the Earth than the moon.

Kris Stanek monitors the sky for the group All-Sky Automated Survey for Supernovae, or ASAS-SN, at The Ohio State University. The group observed the giant space rock, known as Asteroid 2019 OK, just before it passed by Earth.

He says the asteroid sort of "snuck up on us," partly because of its trajectory — coming from the direction of the sun.

"I knew something was exciting the moment I saw the image because it was moving so fast, and then we actually had data for it from both Texas and Hawaii," Stanek said. "There isn't this 'aha!' moment. It's more like building up and then as I am trying to put this information in the system, I'm also seeing people reacting to it and saying, 'OK, that's a big one.' It's kind of exciting."

Stanek spoke to The World's host, Marco Werman, about why the asteroid wasn't detected sooner and if we'd be ready if an asteroid hit the planet.

Marco Werman: Generally, isn't there a pretty good understanding well in advance of any asteroid coming near Earth? Why was this asteroid not detected sooner?

Kris Stanek: The large rocks we've known for quite a while. The first one was discovered in the 1800s. We've been discovering thousands of them. But the size distribution is such that there are many small rocks, and only now do we have the technology to be able to find them. Again, this was unusual because it snuck up on us and because it came mostly from the direction of the sun. We were only able to see it on the last day and that was actually done using very small telescopes, not the bigger ones that usually discover these things.

It seems like a big deal. An asteroid of this size, 100 meters, coming this close to Earth. What does that mean?

I think what it tells us, it's maybe not the wake-up call, but it's telling us that that we should probably look for these things a little bit harder because if this hit here, it would create a crater one kilometer in size. It would wipe out a good-sized city because that would be several megatons equivalent of TNT.

This is the video of the close encounter of Asteroid 2019 OK we have been Twitting all day with the Earth: https://t.co/bjT7uhQJuO pic.twitter.com/3e4UyPcdPl

Even if you had a monthlong warning what could people do? How can you prepare for one of these things?

If you have a month and you know where it hits, you just evacuate. If you have 20 years and it's a really big one, then we can try to do some kind of Armageddon things, except not like Armageddon. But the best scenario is to deflect it to make it miss the Earth.

How does your organization, ASAS-SN, monitor the sky and detect things such as asteroids?

We have 20 small telescopes. They're actually focal lenses deployed around the globe in four different sites: Hawaii, Texas, Chile and South Africa. We take thousands of images every night, and we look at these images through software and most of the time nothing happens. There are stars in the sky, but they don't vary. But we have written software that detects any changes. So, if something changes and is bright enough, we will see it.

I saw one astronomer quoted in Australia saying that at some point or another there's going to be one of these asteroids with our number on it.

Anything can happen. I think the probability game is such that that won't happen for a few thousand years. I would think about this like insurance. I buy car insurance despite the fact that I'm a driver because, you know, you never know what happens. I think humankind is spending many billions of dollars on all kinds of things that we don't necessarily need or to kill other people. I'm not a pacifist, but we should probably be spending on the order of a billion dollars a year on this kind of detection system. If we detect them, then we should also try to figure out what to do about this.