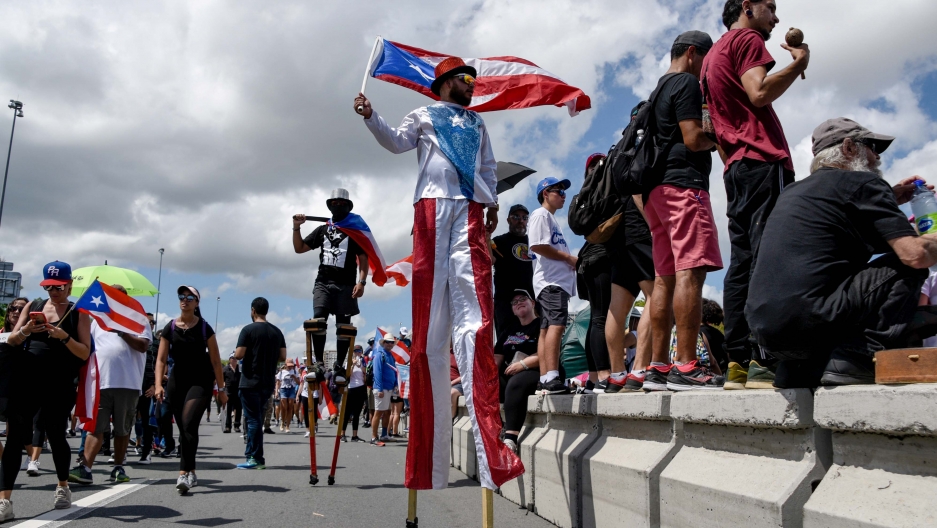 Rosselló's announcement on Sunday that he would not seek re-election next year and would step down as head of the New Progressive Party seemed to have little effect on the crowds, who called for him to immediately surrender the governorship. The island's largest newspaper on Monday called on the first-term governor to leave office.

Crowds of people, many dressed in black T-shirts and waving the US island territory's flag, filled a major highway in San Juan in the latest in a series of more than a week of sometimes violent protests in the capital and elsewhere.

The publication on July 13 of sexist and homophobic chat messages between Rosselló and top aides unleashed simmering resentment over his handling of devastating hurricanes in 2017, alleged corruption in his administration and the island's bankruptcy process.

The protests were also sparked by US authorities' announcement of a federal indictment involving six people, including two former high-ranking Puerto Rico government officials, charged with conspiracy and other crimes in connection with millions of dollars in federal Medicaid and education funds.

Rosselló, 40, asked for forgiveness and said he respected the wishes of Puerto Ricans in a message broadcast online on Sunday.

"I know that apologizing is not enough," Rosselló said in a video posted on Facebook. "A significant sector of the population has been protesting for days. I'm aware of the dissatisfaction and discomfort they feel. Only my work will help restore the trust of these sectors."

Puerto Rico's nonvoting representative to the US Congress, as well as Democratic presidential candidates and lawmakers, have called for the governor to step aside after nine days of sometimes violent protests.

Raquel Salas Rivera is the poet laureate of Philadelphia, but is originally from Puerto Rico. Rivera returned to Puerto Rico to join in the protests. They spoke to The World's Marco Werman about the protest movement currently underway in Puerto Rico. 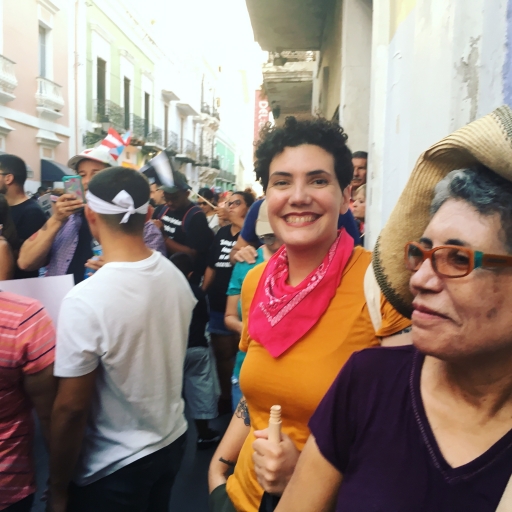 Raquel Salas Rivera: You know, I moved to Philadelphia seven years ago, but I was an activist in Puerto Rico since I was 16. I've seen many movements and I have never seen anything like this in my life. You know, this doesn't just bring out the usual sectors; it's so many people out in the streets protesting but also just the energy on the island shifted. Like walking through San Tulse, everyone said "hi" to me in a way that is different. There's hope, you know. And I think after the hurricane we were in such shock and we had gone through so much trauma and suddenly feel that we as a country, as an island are powerful, and can change the future of Puerto Rico. It's unlike anything I've ever seen.

Marco Werman: Do you believe at this point that the activism is more than trying to get Governor Rosselló out of office?

It is. One of the most popular chants is: "¡Ricky, renuncia, y llévate la junta!"

So it's like, "Ricky, resign and take the junta with you!" And the junta is ... the oversight board which was appointed by the PROMESA law [Puerto Rico Oversight, Management, and Economic Stability Act], and that fiscal oversight board basically has led to the shutting down of more than 400 schools and all these austerity measures that include lowering the minimum wage to $4.25 an hour for people under 25. That includes the planned closure of eight of the 11 university campuses, closures of hospitals, cutting of services, just general impoverishment of a place. It's already poorer than the poorest US state. We're a very poor place, but we're very powerful when we come together and I think that's what we're seeing right now.

Raquel, as you said, you're from Puerto Rico but you live in Philadelphia. Why did you make the decision to come to these current protests in Puerto Rico.

So, I did organize the first protests in Philly initially. When I applied to be poet laureate of the city, I made it very clear that I was applying because I consider myself, like many immigrants, to have more than one home. For me, the concept of home is a little fraught and Philadelphia definitely is a home of sorts for me. But my heart is in Puerto Rico and people show their solidarity in the diaspora in different ways — some by protesting in the diaspora and some by coming back to the island in this crucial moment and joining in the protests here. I chose to come back because I've waited too long for this moment. I've waited too long to see this moment, and I wanted to see it in person. I've never seen something like this.

You said something a moment ago that you considered yourself an immigrant. Do you and other Puerto Ricans who come to the States feel that way? Because you're US citizens.

I think many do. I don't know if all do. But I think many do especially because, you know, it's a very small percentage of the Puerto Rican population that is fully bilingual. Really we're a Spanish-speaking island. We also culturally are very different and our identity is very rooted in that difference. And so I think that most Puerto Ricans, when they moved to the United States, as we saw after Maria with large-scale migrations, find themselves in a place that's nothing like Puerto Rico and that experience is an immigrant experience whether or not we have citizenship. For example, I helped five different queer and trans Puerto Ricans after the hurricane go from Puerto Rico to Philadelphia. And we helped find them housing. We raised fifteen thousand dollars. We hooked them up with medical services. And in that process, it became very clear that we are immigrants because Puerto Ricans were turned away from jobs because they couldn't speak English. They had no idea where to get a coat, for example, or what kind of winter wear they were supposed to wear. They didn't know how to navigate public services. And these were all things that they had to learn with little to no help, and that is an immigrant experience.

There are so many Puerto Ricans who fled the island right after Hurricane Maria. Have you seen and met a lot of people who've traveled back to Puerto Rico to take part in these protests?

Oh, absolutely. There are people who have come. There a lot of folks that I know have written to me and said, "I'm arriving on Saturday, I'm arriving on Sunday, I come Monday, right, to join the protests." And the ones that haven't come, a lot of them are either organizing where they are or they're trying to figure out the best way to get a few days off work so they can come and be part of it. I mean, I think all of us are aware of how important this is. And also the fact that people who moved after Maria were forced to move and that's in part because of Ricardo Rosselló and that's in part because of the federal government that abandoned people. People had to learn to survive on their own here and had to help each other in their communities with little to no help. And those who left people behind because they felt they had no choice. And so the general feeling is one of indignation but also a desire to join in that collective mourning and rage which was postponed because of all the grief and the need to survive at the time.

You know, there is so much polarization in the US, so many things that you'd think would get people out in the streets. What is it about Puerto Rico or Puerto Ricans that they so quickly hit the streets on foot and motorcycle, in the water in boats. I mean it's pretty extraordinary — the videos I've seen over the last few days. It's been really dramatic.

The general feeling right now is that we are one and that each of us is important and that is something that the governor in his chat was the exact opposite of that right. Like in the chat they even go as far as to calling someone who isn't famous "non-people," right, like it to them we are "non-people" and I think it's really important to say that, like right now, we're saying "no." Every single one of us is important to this country and to this place and we are a people — a people that not only include those that are protesting but also include the 4,645 or more people that died during the hurricane.

Raquel, your recent collection of poetry is called "while they sleep (under the bed is another country)." It's a focus on life post-hurricane.

So, a lot of the people who were in the diaspora — our only contact to those we loved was when they had occasional cell phone service or could post about things on social media and I, during that time, saw many people talk about wanting to die. Many of my friends talk about wanting to die. And so the context for this poem is my wanting to talk to those friends that I couldn't contact and what I would say to them if I could.

So, with these memories Raquel, what do you want next?

Honestly, in the immediate sense, I would like Rosselló to resign. But I also really think it's an important point about the Control Board not intervening, because the Control Board was not democratically elected. It was hand-selected by US politicians to determine what happens to the people of Puerto Rico. It's unconstitutional, it's undemocratic. And you know most Puerto Ricans want him out.

And I think that if Puerto Rico isn't a colony, which I believe it is, the United States wouldn't treat it like this. And I think that it is time to give the people of Puerto Rico the decisional power over what happens to us into our lives into our future. You know, and I don't have to ask for that. You know, a million people are out on the streets asking for that. We're really mad.