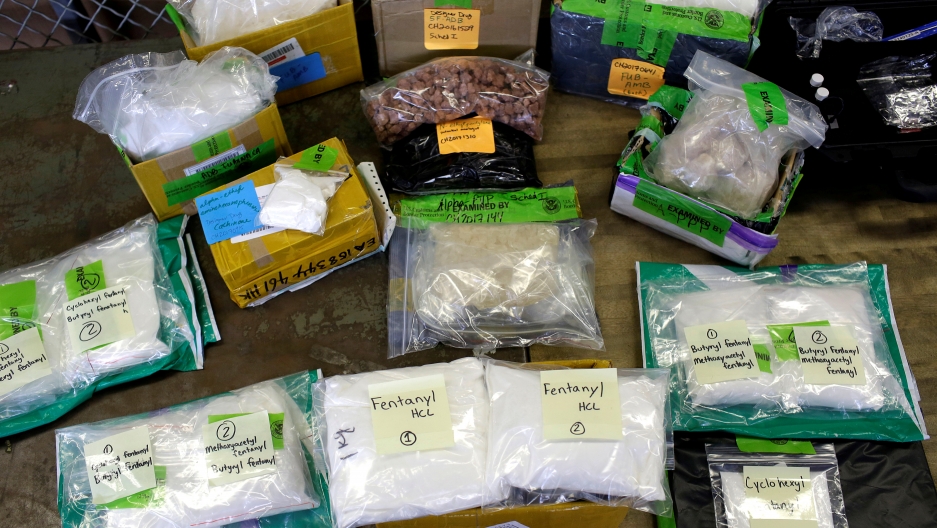 Plastic bags of fentanyl are displayed on a table at the US Customs and Border Protection area.

Trump administration officials are divided over part of a proposal to crack down on illicit versions of fentanyl, the deadly synthetic painkiller that President Donald Trump targeted in declaring a national opioid abuse emergency.

In an inter-agency dispute that highlights the challenges of curbing opioid abuse, the US Drug Enforcement Administration (DEA) is publicly backing tighter rules for fentanyl analogs, which are slightly altered copycat versions of the powerful drug fueling an explosion in overdoses.

In this case, the bill would cut the Food and Drug Administration out of the time-consuming review process by letting the DEA permanently classify illicit fentanyl analogs as Schedule I drugs, like heroin, which are deemed to be addictive with no medical use.

Of 70,200 US drug overdose deaths in 2017, according to the CDC, about 41% involved synthetic opioids, such as fentanyl and illicit analogs of it. Most of them are made in China.

Fentanyl, some versions of which are approved to treat cancer pain, is 100 times more potent than morphine.

The World's Marco Werman spoke with Scott Stewart, an expert on terrorism and security issues with Stratfor, a global intelligence consulting firm. Before joining Stratfor, he was a special agent with the State Department for 10 years and involved in hundreds of terrorism investigations.

Stewart explained the global supply chain that brings fentanyl to the US.

Marco Werman: Fentanyl is such a dangerous and fatal piece of the opioid crisis here in the US. Right now, as of July 2019, where's it coming from, which countries?

Scott Stewart: We're seeing some fentanyl sent directly from China to the US, primarily in the flow of commerce, stuff that's coming in that's being purchased on the dark web. In this dynamic, we'll have fairly pure fentanyl sent by mail to dealers who will then cut it into either fake narcotic pills or they will cut it into fake heroin. Then also we have organized crime groups that are trafficking it into the country through Mexico and then we also see some of it coming in through Canada from Asian organized crime groups.

With fentanyl coming to the US via Mexico, what's happening to it in Mexico before it gets brought into the US?

Well, we're kind of seeing two sources there. Some of it is coming in directly from China that's already made and manufactured, but then we're also seeing the precursor chemicals come into Mexico and then the Mexican cartels are synthesizing fentanyl in their labs. It's actually an easier drug to synthesize than methamphetamine. So, these Mexican super labs are pretty well-positioned, both in terms of their supply chain to China but also their ability to synthesize the drug due to their experience in the methamphetamine trade.

Trace the route for us for fentanyl as it leaves Mexico and comes to the US. How does it get here? Who's delivering it and who's it delivered to?

What we're seeing is that they're pretty much piggy-backing onto the infrastructure that they've established and long had established for other drugs coming into the US. Especially the synthetic drug organizations, such as Sinaloa, are using a lot of the same labs and infrastructure to smuggle the drugs into the US that they've used for methamphetamine. Also, we see a lot of parallel into the Mexican cartels that have really cornered the heroin market in the United States. So, we're seeing fentanyl being also pushed in that same supply chain up into the US and then down to street distributors.

What do you think makes fentanyl the drug of interest currently from Mexican cartels?

There are really several factors that make it really an ideal drug for these organized crime groups. One is that it's cheap to produce. We're seeing estimates coming from the DEA that it costs between $1,400 to $3,000 a kilo to produce. Of course, they can then turn around and sell that retail for over a million dollars on the street.

How does that compare to heroin, for example?

It's much more lucrative. So, essentially, smuggling one kilogram of fentanyl is roughly the equivalent of smuggling 50 kilograms of heroin into the US.

What are the other reasons Mexican cartels all seem to like this?

It doesn't have a growing season like opium poppies do. You don't need a lot of land to cultivate it, like you do opium poppies. Basically, you can fabricate or synthesize it any place that you have the chemicals available. It's also compact to smuggle. It's lucrative, compact, easy to make and easy to smuggle. It really is a dream drug for Mexican organized crime.

Which country do you think is the bigger threat at this point in terms of fentanyl flooding the US, China or Mexico?

It's really a combination of all of the above. I think that, like the methamphetamine trade, everything goes back to these precursor chemicals that are predominantly coming out of China. But certainly, the Mexicans then have the ability to really crank out and then smuggle huge quantities of this drug. I don't want to downplay the mail-order dark-web model. It is resulting in deaths and certainly, just a few grams or an ounce of fentanyl that is very pure coming in from China can kill a lot of people. But we compare that to these shipments of 100 kilos or 70 kilos that we're seeing coming in from Mexico and we can see that the Mexicans are really flooding the market with fentanyl in a way that the Chinese can't do directly by mail.

Why do the precursor chemicals for fentanyl come solely, it seems, from China?

I think a lot of that just goes back to the difficulty of controlling all these factories and the number of them that there are in China. That goes back to the history of the methamphetamine trade, too. Initially, we saw a lot of the meth chemicals coming out of India. The DEA basically approached both India and China and asked them to clamp down on the trade. The Indians were able to largely do so. Unfortunately, the Chinese have not been able to. Of course, I think the problem still remains larger than that, though. There are other places that can produce fentanyl or the precursor chemicals — countries like North Korea, who see illicit drug markets as a way to raise much-needed foreign capital. Even if we were able to somehow magically shut down the flow of precursors from China, these organizations would still be able to get other chemicals or find the precursors elsewhere.

You spend a lot of your time researching and writing about drug cartels and the opioid epidemic in the US. What keeps you up at night? What are you most worried about?

What is that product you just described?

Is there strong evidence already that it is getting the attention of organized crime in Italy, Russia and in the Balkans?

Right now what we're seeing is, you know, in places like Australia, the UK, parts of Europe and even in Estonia, there's been an increase in fentanyl use. Right now, it seems to be mostly that dark web mail-order type trade but I believe that we're going to see these organized crime groups try to assume control of that market and then increase it. These same organizations already control the heroin trade in much the way the Mexicans have kind of cornered the heroin trade in North America. I think they're going to follow the same path that we've seen the Mexicans use in North America in these other parts of the world.