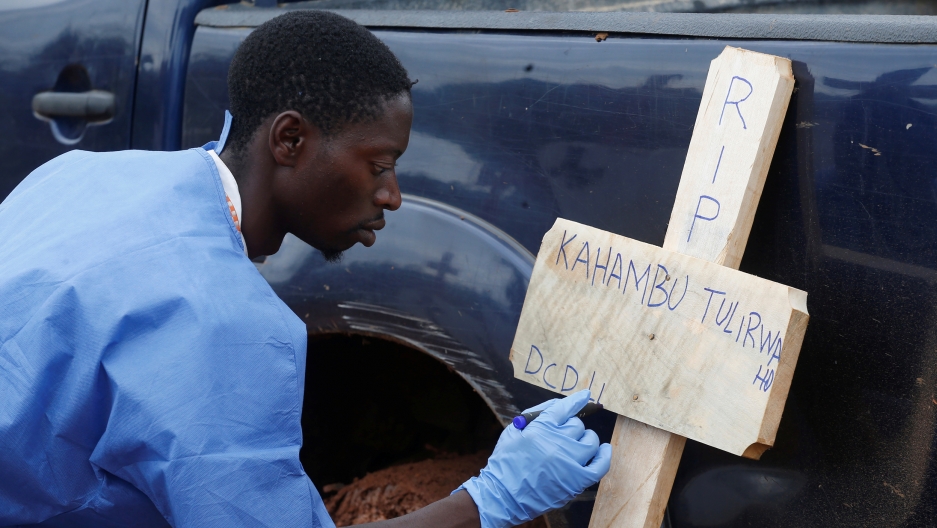 A Congolese Red Cross worker writes a name on a cross of Congolese woman, Kahambu Tulirwaho, who died of Ebola, before a burial service at a cemetery in Butembo, Democratic Republic of Congo, March 2019. The World Health Organization has declared the outbreak a public health emergency of international concern.

The World Health Organization on Wednesday declared Democratic Republic of Congo's Ebola outbreak a public health emergency of international concern, sounding a rarely used global alarm after the virus threatened to spread to a major city and into neighboring countries.

Despite a highly effective vaccine and a swift international response after it was declared 11 months ago, the outbreak has proved tenacious in an unstable region beset by violence, becoming DR Congo's worst-ever — with almost 1,700 dead.

Related: 'No place for complacency' as Ebola detected in eastern DR Congo

A vast campaign of vigilance and vaccination, with almost 75 million screenings, has kept the highly infectious virus almost entirely confined to two provinces in northeastern DR Congo. The emergency committee of international health experts that advises WHO had thrice declined to declare an emergency.

But this month, a pastor died after traveling to Goma, a city of 1 million and a gateway to other countries in the region. On Wednesday, WHO reported a fisherwoman had died in DR Congo after four vomiting incidents at a market in neighboring Uganda, where 590 people may be sought for vaccination.

"The committee is concerned that a year into the outbreak, there are worrying signs of a possible extension of the epidemic," the committee's report said.

The committee had been under pressure from many experts who felt the scale of the outbreak and the risks meant it had to be given the emergency status — only the fifth such disease outbreak since the WHO introduced such designations in 2005.

"It shows no sign of coming under control," said Peter Piot, a member of the team that discovered Ebola and is now director of the London School of Hygiene & Tropical Medicine.

"I hope that today’s decision serves as a wake-up call to drive high-level political action, improved coordination, and greater funding to support DR Congo in their efforts to stop this devastating epidemic," he said.

The World's Marco Werman spoke with Tariq Riebl, Ebola emergency response director for the International Rescue Committee, who is working in Goma to coordinate the response.

"We're seeing people really reacting very strongly to this, despite the fact that we're almost at the one year anniversary of the outbreak," Riebl said. "The epicenters have been very far away from Goma, in the northern part of the province of North Kivu, and we do think that many people in the population have possibly been a bit too sanguine, a bit too relaxed about the situation, overall. For us working on the response, however, this has always been an inevitability and in some ways, we've been surprised that there haven't been more cases over time. Pleasantly surprised, of course, given the movement of population between the epicenters in the north and Goma."

Marco Werman: So, what does this declaration of a global health emergency actually mean? Is it a global threat?

Tariq Riebl: We don't think that it's a global threat at this point. We have seen only three cases cross the border to Uganda. They were a part of the same family and that was rapidly contained and didn't lead to any transmission in that country. But we are extremely concerned by the fact that it has been one year now that this outbreak has been ongoing with consistent numbers and that the transmission seems to be continuing unabated.

When it comes to containing the Ebola virus and this continued risk of it moving across international borders, what does declaring the outbreak a global health emergency in DR Congo actually do?

Well, for one, we hope that on the positive side that it will increase the level of attention to this crisis. Many people have probably not even been aware that this is already the second biggest Ebola outbreak of all time. And we hope that donors will respond by supporting the response on the ground with additional means. However, on a slightly more negative note, we are concerned that some governments may react in an alarmist fashion and we would hope that there wouldn't be any travel restrictions imposed on [DR] Congo. We're concerned that that could impact that response in terms of the movement of health care workers and medical supplies. And furthermore, for Congolese people [who] are moving across borders, that if they're prevented or they're restricted from moving that they might seek more clandestine measures that would make contact tracing much more difficult.

As you say, the outbreak has been growing since last August. Why wait until now to declare it an emergency?

I do think that when we look at the transmission, as I mentioned, besides the three cases that have crossed into Uganda, we have not seen an international case and even the cases in Uganda were very clearly cases that came out of known epicenters and in fact, even known contacts, so that they were very much Congolese cases. So, in that sense, it hasn't had that international dimension. We saw, for example, in West Africa, where we had three countries with active transmission over a very long period. And then, of course, cases going into other countries not just neighboring but on different continents as well. We have not seen that in this outbreak. So, that international dimension has been lesser.

The hope, as you said, is that more resources will come into play with a declaration of a global health emergency for this Ebola outbreak. But is that also kind of the point of declaring this emergency, to get more funding?

Absolutely. I think that's probably one of the key positive impacts of the declaration. I don't think anyone would have thought this was going to go on for this long. So in that sense, it's very different to other outbreaks of Ebola which usually have been very short — usually three months or thereabouts. So this already is a completely different animal compared to those and therefore, continued attention is needed to bring this to an end.

We've spoken here on The World with a doctor on the ground in Benin, one of the hotspots of this outbreak, and he says they have the drugs, they have the capacity to treat people, but mistrust and militia violence mean that people are hesitant to seek help and that lessens their chance of survival, of course, and increases the chances of Ebola spreading. Will this declaration do anything to ease those challenges?

Indirectly, they may cause some of the attention to shift on the medical side. As the colleague stated, we have everything we need in terms of treatments and vaccines. I think where we need improvement is on the community side, to be able to win the trust of communities by communicating clearly with them by being able to collaborate and work with them together and being able to do a better job of outreach. I think that's the key aspect that all of us are trying to improve on in this response and that ultimately will bring this to an end.