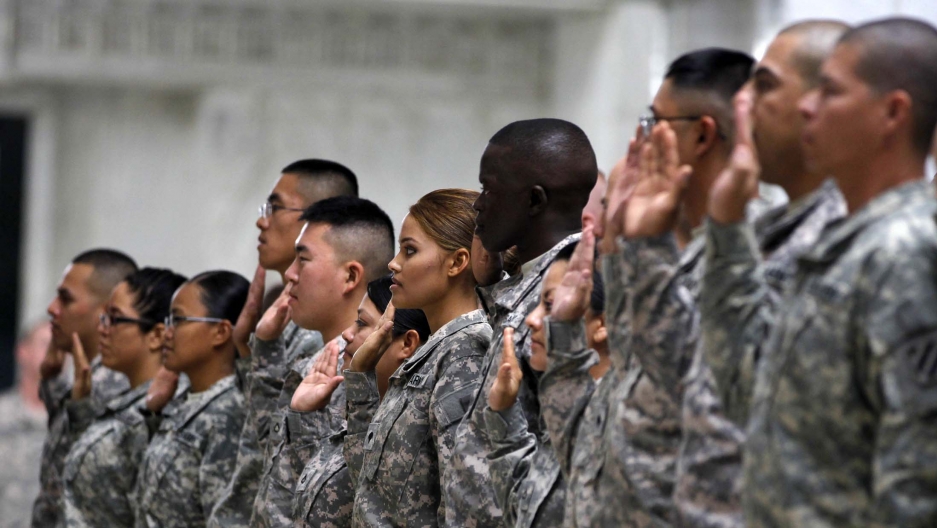 Roman Sabal served in the United States Marine Corps for six years, and in the US Army Reserves for several more. But on Monday, border officials at San Ysidro denied Sabal entry to the US for a scheduled citizenship interview.

Sabal lived in the US for more than a decade and joined the Marines in 1987, eager to serve the US. In 2008, he returned to Belize for a visit and while he was gone, a judge ordered him to be deported at a court hearing he was not aware of because he was not in the US.

Sabal has been stuck outside the US since that 2008 trip.

Sabal told the San Diego Union Tribune that he used fake documents to join the Marines but did confess his immigration status during boot camp and was told "Don’t worry about it. You’re a Marine now."

Non-citizens who serve in the US military have historically been offered expedited paths to citizenship, but under the Trump administration, immigrants serving in the military are being denied citizenship at rates higher than foreign-born civilian applicants, according to statistics from US Citizenship and Immigration Services.

Related: Many US soldiers have been deported after serving

Border officials, who are able to temporarily let people into the US for “humanitarian or significant public benefit,” turned Sabal away on Monday. Sabal was honorably discharged from the military and returned to Belize for medical treatment. His partner and children, however, remained in the US. Sabal has now been unable to return to the US to rejoin his family. He's one of seven deported veterans with pending citizenship cases.

Related: Iraqi translators who served the US military are desperate for an exemption to Trump's travel ban

Sabal and his lawyer, Victoria Starrett, spoke separately to The World about Sabal's situation.

Sabal says, "I was confident that all the paperwork was ready. I was told that everything was ready, just go across to our interview and hopefully be sworn in the same day. And I ... was really looking forward to it. I had explained to my kids that this was the process and they were all excited and looking out for me, waiting for me. But we were turned away at the border. People said that we could not get in because it was ICE that authorized us to get into the country and not the people at the border."

The World: So, that was the only explanation they gave you?

Roman Sabal: Yes. That was all and nothing else after that.

What made you think that when you left the States that it would be easier to return back then?

I was assured that becoming a citizen would not be a problem. I used to be back and forth, you know, visiting my mom in Belize, coming back with no problem.

Your career in the Marines is pretty impressive. You traveled to South Korea, Japan, Thailand and the Philippines. Do you think having served in the US military for six years means you should automatically deserve citizenship?

Well, that's not what I'm saying, but I put my life on the line for the country and I have no criminal record. I'm disappointed but I'm still hopeful.

Roman, what's been the hardest part of this whole episode for you?

You know, I've missed all these birthdays, Christmases, Thanksgivings. You know, holding my children's hands. And that is what is difficult, but life goes on and hopefully, something positive is going to come to me out of all this.

Victoria Starrett, you're Roman's attorney. What did you expect when you went to the border? Were you optimistic? What were you hoping would happen on Monday morning?

Victoria Starrett: We were hoping that CBP would grant our client a very short parole so that we could take him 45 minutes into San Diego for an hour interview and bring him right back. We thought that was a reasonable request given the fact that he has no criminal convictions and that he honorably served in the Marines and Army National Guard for nine years. But they would not even accept our parole request at the border and we did not find out that they had denied his request until our Congressional Representative Karen Bass's office was in touch and they received the denial and let us know that.

What does that tell you about the system, in particular as it applies to veterans?

The immigration system is clearly broken and it's particularly broken for individuals who have served honorably in the US, in uniform. Congress has created a special and free path for these veterans to become citizens. Yet there's not a clear process for them to access this opportunity, despite demonstrating their statutory eligibility.

US Citizenship and Immigration Services has had interviews at the border and consulates for other veterans with deportation orders. Yet they're unwilling to provide these opportunities until veterans spend unnecessary financial and physical energy pursuing paths we all know will ultimately be denied.

Are veterans in situations like his being dealt with in a very different way now than in the recent past?

Our project is relatively new, it's only been funded for a year, although the American Civil Liberties Union has been doing this work for a few years before then. It has been an uphill battle at all times because there has never been a clear process for veterans to get to their interviews without a lot of lawsuits or various applications that need to be to be filed — unnecessary applications — and we all expect to be denied. But I do think that it has become harder and there was a recent report that veterans and current military members are being denied citizenship at higher rates than civilians. So it does seem that there is a particular animus toward this group of people from this administration.

We've heard from dozens of people who've been really outraged hearing this story, but in particular, it has been a lot of veterans or current military members who are ashamed that this is the current policy.

What is Roman going through vis-a-vis his family and the life that he established here?

Roman has been forced to be separated from his two children, including his 13-year-old daughter and his 20-year-old son. He's been forced to miss his son's high school graduation and I think it's been the hardest on his daughter because ... I think it's hard for her to understand why someone like her father, who served honorably in the military, who has never been convicted of any crime, who has been a good father who has tried to be in his children's lives through Skype and phone calls and doing whatever he can to support them despite being forcibly separated from them — you know, it's hard for her to understand why they can't be reunited.

These interviews have been edited and condensed for clarity.