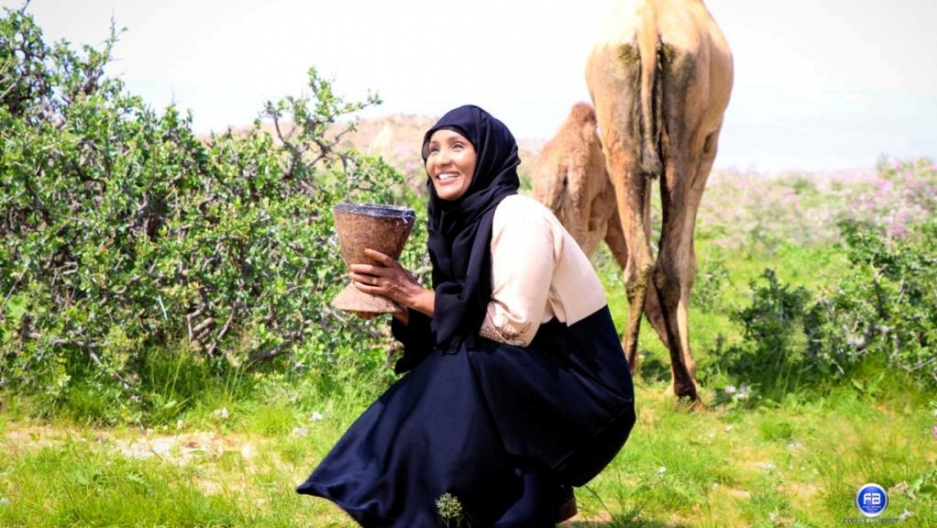 Someone once said, “Don’t be afraid to start over again. This time, you’re not starting from scratch, you’re starting from experience.”

Learning to enjoy the simple life of living back home. I love attending events that stimulate the mind and leave you wanting to do more for your society! #KBF2019 #MySomalia pic.twitter.com/v4imbmd1GJ

Nalayeh, 43, was among the 26 killed over the weekend when Islamist gunmen stormed a hotel in the Somali port city of Kismayo, officials said on Saturday, the deadliest attack in the city since insurgents were driven out in 2012.

A car bomb exploded at the hotel in the southern port city while local elders and lawmakers were meeting on Friday night, before three gunmen stormed in, police said. Security forces took 11 hours to end the siege, they said.

Kismayo is the commercial capital of Jubbaland, a region still partly controlled by al-Shabab, whose fighters frequently carry out bombings in Somalia and neighboring Kenya, whose troops form part of an African Union peacekeeping force.

Through her work as a journalist, Hodan highlighted the community's positive stories and contributions in Canada. She became a voice for many.

We mourn her loss deeply, and all others killed in the #KismayoAttack.
https://t.co/O87FIWNlqd

"Through her work as a journalist, Hodan highlighted the community's positive stories and contributions in Canada. She became a voice for many. We mourn her loss deeply, and all others killed in the #KismayoAttack," Ahmed Hussen, Canada's immigration minister, wrote on Twitter.

Producer Lior Khananaev worked closely with Nalayeh at Integration TV, an English-language program that sought to tell positive stories for the Somali communities around the world. Khananaev spoke with The World's Marco Werman about Nalayeh.

Marco Werman: What was Hodan Nalayeh trying to accomplish with her work?

Lior Khananaev: Hoden was an inspiration to many people around the world, particularly the Somali community. You know, Holden could've lived a regular North American life but she chose to get out of her comfort zone and follow ... her dreams. She tried to reconnect a broken Somali community. And, you know, the Somali youth ... they faced backlash, they faced a lot of criticism for crime that ... put a bad light on the community.  And Holden would put all her energy into reconnecting the youth and shining a light on Somalia.

Her show, who was watching it and was it popular?

So, her show was catered to Somalis and Somali youth and the diaspora. She really tried to bring positivity to the country because, unfortunately, that country, it had a very tough history and people just really suffered there. She tried to tell positive stories about the community — the local heroes that you don't see on the news. Hoden devoted her entire life. She gave her life to that country and I hope the Somali youth will get together after this tragic loss.

What kind of people did she profile? Who did she find interesting?

She would interview you know the local Somali stories, either its upcoming author, a Somali author, or politicians. She interviewed actors that appeared in Hollywood. She just tried to shine a light on regular people, so ... there's no stigma on the Somali community because unfortunately a lot of people just see Somalia as this country that ... has a lot of negativity to it. And so she would try to find people that were enthusiastic, that ... brought a lot of good fortune to the Somali community. That's what she dedicated her days to.

You and Hodon were of very different backgrounds and yet you became fast friends. What did you learn about Somalia from Hodon?

I learned that even though the community is very broken, it's also very tight. And the more damaged you are, the closer you are together as a community. And, you know, I think the Somali culture is in a rebuilding phase. Holden was really in the middle of it all. And I learned that these people, even though they don't know each other, they'll hug you, they'll kiss you, they'll bring you into the family right away no matter who you are, no matter what culture you are. It's a very open community. We as a society have to stop thinking this stereotype of Somalis. Really, with the youth, it's becoming better and better as time goes on and Hodan really contributed to that change.

What do you think her legacy is going to be?

I think her legacy will be that she took away the fear of revisiting Somalia, which ... a lot of families have dispersed from Somalia, obviously, from fears of government turmoil and all that. And I think with Holden's positive image that she shined on Somalia, it's really going to bring faith back into the country and it's good. I think there's going to be a total reconstruction of how people see this country.

So, I imagine you understand Somalia pretty well thanks to Hodan. I'm really curious to know what you thought of the suggestion in one of Trump's tweets on July 14 that seems to apply to Congresswoman Ilhan Omar reading, "Why don't they go back and help fix the totally broken and crime-infested places from which they came? They need your help badly." What did you think about that?

I think it's wrong to say that to anyone. Obviously, people don't understand the country, right? They see it for what they hear on the news. And I think Hoden was trying to show the world that Somalia is not as bad as it is. You know, there's just a small group of extremists that make it very difficult for everyone to live there, but for us to judge that the country is infested with crime, it's absolutely wrong and it's ... a disservice to the people, really, because there are so many more good people in Somalia than there are bad ones and, unfortunately, when you get mixed up in that crowd, you just end up suffering as a community. I think the government has a lot of things to work out. And I think the way we speak about Somalia as a society needs to change as well.