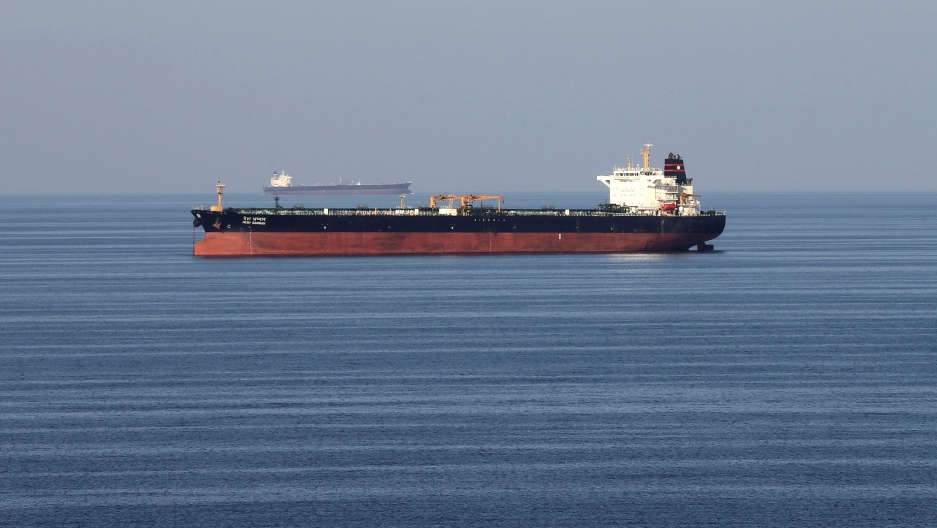 Oil tankers pass through the Strait of Hormuz.

Three Iranian vessels tried to block a British-owned tanker passing through the strait that controls the flow of oil from the Middle East to the world but backed off when confronted by a Royal Navy warship, Britain said on Thursday.

A week after Britain seized an Iranian tanker accused of violating sanctions on Syria, London said the British Heritage, operated by oil company BP, had been approached in the Strait of Hormuz between Iran and the Arabian peninsula.

"HMS Montrose [the escort ship] was forced to position herself between the Iranian vessels and British Heritage and issue verbal warnings to the Iranian vessels, which then turned away," a British government spokesman said in a statement. It urged Iran to "de-escalate the situation in the region."

In Washington, President Donald Trump's nominee to become chairman of the US military's joint chiefs of staff told Congress that there appeared to be an attempt by small naval vessels to "take over" a British commercial vessel.

US Gen. Mark Milley said freedom of navigation was a fundamental principle and that the US and its allies would look into and develop military escorts for commercial ships over the coming weeks.

The US blames Iran for a series of attacks on shipping in the world's most important oil artery since mid-May— accusations Tehran rejects. The foes came as close as ever to direct military conflict last month, when Iran shot down a US drone and Trump ordered retaliatory air strikes, only to call them off minutes before impact.

Britain stepped forcefully into the crisis when its Royal Marines seized the Iranian tanker Grace 1 off the coast of Gibraltar last week. Iranian officials have since been quoted as suggesting Iran might retaliate against British shipping.

A British security source said London had already raised its threat warning level for British ships in Iranian waters to the highest possible category earlier this week, although it did not plan to escort every British-flagged vessel through the strait.

Related: Tanker attacks seen as calibrated but risky Iranian response to US sanctions

Britain would defend its maritime interests but was not trying to escalate the situation with Iran, the source said.

Police in the British territory of Gibraltar said on Thursday they had arrested the captain and chief officer of the Grace 1 Iranian supertanker accused of violating EU sanctions on Syria and seized documents and electronic devices from the ship.

Ellen Wald is an energy consultant and the author of "Saudi, Inc.: The Arabian Kingdom's Pursuit of Profit and Power." She spoke to The World's Marco Werman about growing tensions in the Gulf.

Ellen Wald: Well, it seems that what happened is there a British oil tanker that was traversing the Strait of Hormuz to exit the Persian Gulf, and it was being escorted by a British frigate, I believe, a type of military vessel and some ships from the IRGC (the Iranian Revolutionary Guard Corps) tried to intercept, it appears, and the British naval vessel positioned itself between the tanker and those ships and told them to back off. And this apparently happened in a very particular area of the Persian Gulf which the British say occurred in international waters but Iran disputes this particular boundary and says it's actually their waters — and so the delineation is a bit unclear. The Iranian ships did back off and the tanker was able to exit the Persian Gulf. On the Iranian side, they denied that this issue happened but the British claim that there was an American aircraft overhead that recorded the entire incident — but we haven't yet seen video from that.

One of the issues is that a ship that was taking Iranian oil — purportedly bringing Iranian crude oil to Syria — was seized in Gibraltar, which is owned by the British and they seized this ship, called the Grace 1, and have basically impounded it in Gibraltar. And they claim that this ship was in violation of EU sanctions that prevents selling oil to the Syrian government. We just did have word that apparently the authorities in Gibraltar have actually arrested the chief officer of the ship. In response to the detention of the ship, Iran had said that it would retaliate against British ships in the Gulf.

So where all this happened, the Strait of Hormuz, it's a site of many ships and tankers passing. Describe this narrow strait and what it represents.

How many miles across?

Twenty miles across. And it's even more narrow because ... you have to account for two-way traffic. So, there's even less room there. And so this entire conflagration has essentially created even more traffic now that many nations are insisting that their oil tankers be accompanied by military vessels to prevent any sort of sabotage or other incidents similar to the one that we saw last month. So, the British aren't the only ones who are sending military vessels to escort tankers flying under their flag to ensure that their ships are not harassed in any way.

How unusual is this kind of standoff?

It's not unheard of and it has happened in the past. There was an incident in 2015 where Iran tried to seize a ship that was carrying certain cargo or certain containers that it had disputed and then, as a result of this, the US Navy was escorting some tankers through this area. So it's not unheard of. The question is really how long is this going to go on and what kind of effect is this going to have — in the long term — on traffic going through the straits? Because in the previous issue, the military escorts only lasted about a week. But if this goes on it could cause some congestion in the area. And the other issue is is the expense of having these military vessels escorting the oil tankers.

There was a tanker war in the Gulf in the 1980s. What is the 30-second history of that and how disruptive was that to the world's oil markets?

It was definitely disruptive to the world's oil markets but it really occurred against the backdrop of a much larger war between Iran and Iraq, and that's not really a situation that we're seeing here. I don't see a whole lot of parallels in this case other than the fact that the US Navy was needed to ensure the security of tankers. The world oil market is in a different situation these days than it was in the 1980s. But I can see why people are looking to that for parallels, though the political, diplomatic and military situation is not really the same at all.

Is the energy market nervous about the possibility of a confrontation in the Gulf?

That's the million-dollar question and it seems that the energy market is really not all that reactive to this situation. In any other situation, we might see just news that Iranian ships even threatened an oil tanker would cause prices to jump. But right now the energy market is really very fixated on slowing demand for oil and that's really keeping a lid on prices right now. The only thing that's really affecting prices right now is demand — the overall economic situation — when we get the news that the US and China might resolve their trade dispute that can cause oil to go up. But these issues in the Gulf are really not affecting oil nearly as much as we would expect in a different demand situation.