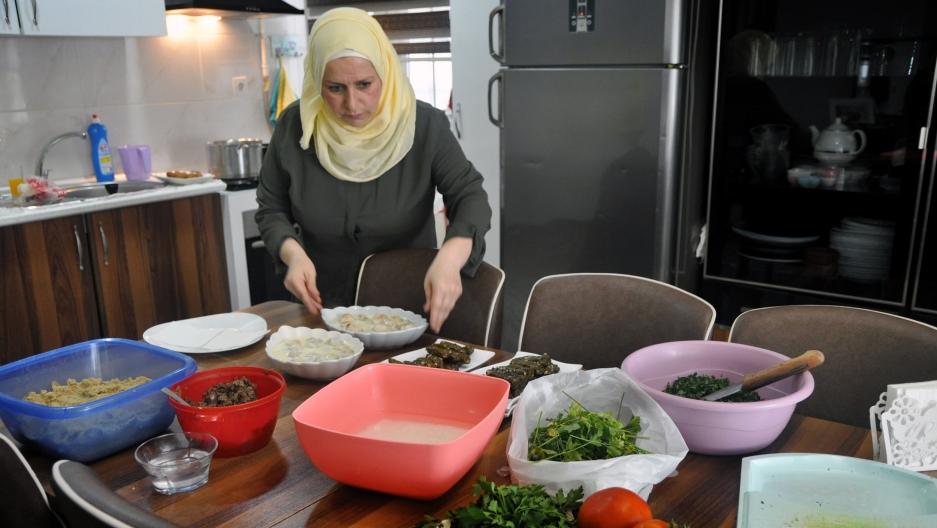 Samar al-Mallah checks the dishes she’s prepared for lunch with her catering business, Karadish Kitchen, that she runs through a Whatsapp group in Istanbul, Turkey.

On weekday mornings, the smartphones of more than a hundred Istanbul residents light up with a cheery Arabic greeting and pictures of home-cooked Syrian dishes that Samar al-Mallah plans to cook that day.

Then Mallah, a mother of four, waits for the orders to come in. And they do.

“I believe you can reach the heart of a person through food,” Mallah said. “Food is something you can send a lot of messages with. You can put all of your love, all of your feelings. You can build relationships through food.”

There is shish barak, a classic dish of toasted meat dumplings, stewed in a savory yogurt sauce; the tangy brightness of tabbouleh, chock-full of fresh tomatoes and cucumbers; and Mallah’s personal favorite are the kibbeh — spiced, fragrant ground meat packed and fried in a bulgur casing. 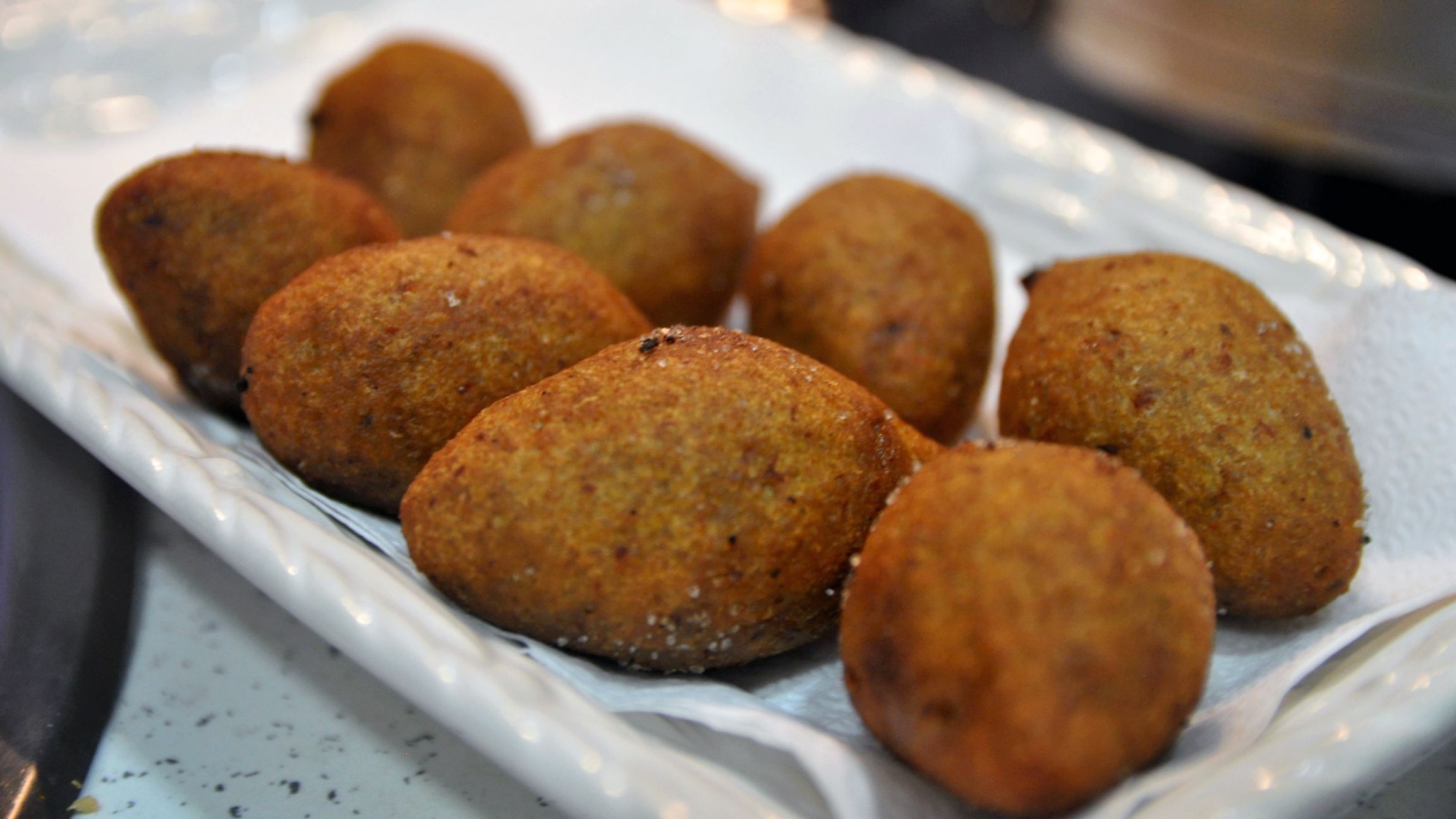 A plate of kibbeh, freshly fried and fragrant with cumin, cinnamon and cloves. “It’s really very difficult to prepare ... I have my own way, which makes it really special,” says Samar al-Mallah.

“Rarely, I find people who cook it the same way that I do,” she said.

Life was not always like this. When the war in Syria started in 2011, Mallah’s husband, Youssef Alozon, worked as an electrical engineer in Damascus. She stayed home, raising their four kids. Sure, her kibbeh was the best in town — though she never thought she’d earn a living with it.

Then the war hit home.

“My husband was arrested for a month and a half. So we decided to flee,” Mallah says.

For the past four years, they’ve made a home in Istanbul alongside more than half a million Syrian refugees. The job market is difficult for both Syrians and Turks — and Turkish businesses often only hire Turkish speakers. Work permits for Syrians are expensive and often difficult to come by.

The family sank their savings into a couple of business ventures, hoping to earn a living in a tough job market. Unfortunately, none of them worked out.

“We were out of money, and then we thought about an idea to start with, with no cost —  almost no cost."

“We were out of money, and then we thought about an idea to start with, with no cost —  almost no cost,” Alozon says. “So we started with the equipment and tools that we have in our kitchen.”

One day, their adult daughter mentioned how bad cafeteria food was at her office. So Mallah sent her in with a homemade lunch to share with her coworkers. The feedback was glowing.

“They said that my food really tastes the same, like their mother’s food,” Mallah said. “That feedback gives me the power to overcome the difficulties.”

During a family meeting, another daughter thought of the project’s name: Karadish Kitchen. In Syrian Arabic, karadish translates to “large chunks of meat” or — a bit of extra weight.

“It’s a metaphor actually; we use the name to show that we are generous with the food, that it’s really rich,” Mallah explains.

Word started to spread to other offices, small businesses and friends of friends. Samar Mallah and Youssef Alozon were invited onto a cooking show, profiled on an Arabic-language YouTube channel. They caught the attention of a local foodie website seeking out Istanbul’s hidden culinary treasures, “Culinary Backstreets.” In addition to Mallah’s dishes, Alozon started making cookies and pastries to sell alongside the meals.

The Whatsapp group swelled with phone numbers from Syria, Iraq, Yemen, Algeria, Somalia, Saudi Arabia. The family’s customers in Istanbul all seemed to have one thing in common — they were living far from home.

To keep up with demand, Mallah capped the group at 150 people, but the message was clear. In Istanbul, there is a market for homemade food. Though perhaps not for the same reasons that Blue Apron and Grubhub took off in the United States. 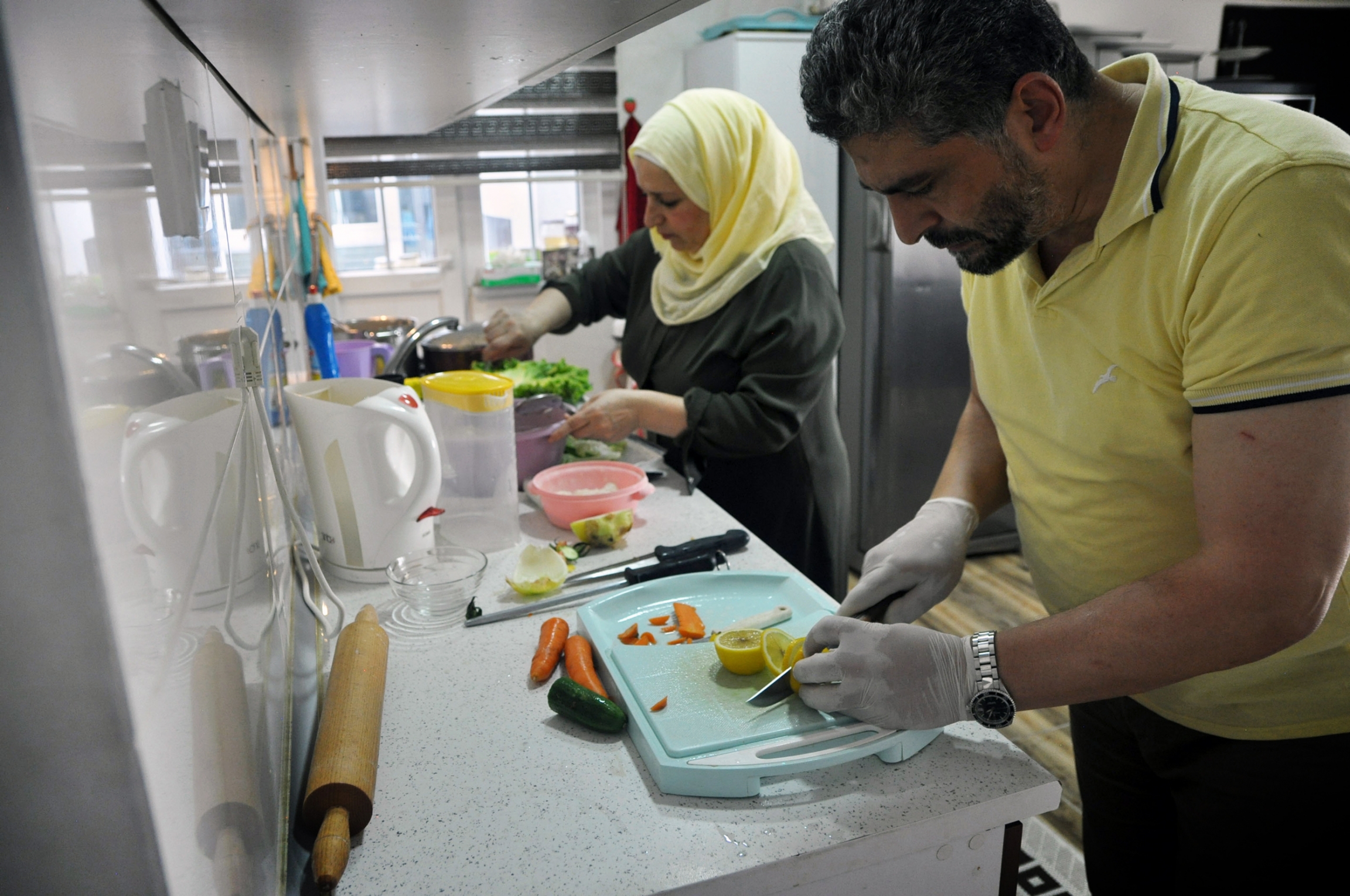 While Samar al-Mallah is the head chef of the operation, her husband Youssef Alozon leads the way with the desserts and pastries. Cinnamon rolls are among his favorite recipes.

Istanbul has one of the largest refugee populations in the world, as well as a significant number of international workers and students. Young Turks, too, are increasingly moving away from their extended families to live in the city.

“We feel that we are feeding our children. ... Being here alone, as singles, working. Nobody’s taking care of them. But we feel very satisfied when we can make them happy, even from a meal.”

“We feel that we are feeding our children,” Mallah said. “Being here alone, as singles, working. Nobody’s taking care of them. But we feel very satisfied when we can make them happy, even from a meal.”

When customers were asked what Mallah’s food means to them, sent through their WhatsApp group, the responses flooded back in English and Arabic.

“I am in love with this family, this beautiful family,” one young woman said.

“She’s the mother who’s taking care of us, and cooking our food that we miss and can’t live without. ... You are a mother to us. May God keep you, above our heads.”

“She’s the mother who’s taking care of us, and cooking our food that we miss and can’t live without,” said one man, originally from Damascus. “You are a mother to us. May God keep you, above our heads.”

Mallah and Alozon are now finishing up a small business training program in Istanbul, called the LIFE Project. At the end, they’ll compete for a small grant to expand their business into a commercial kitchen. 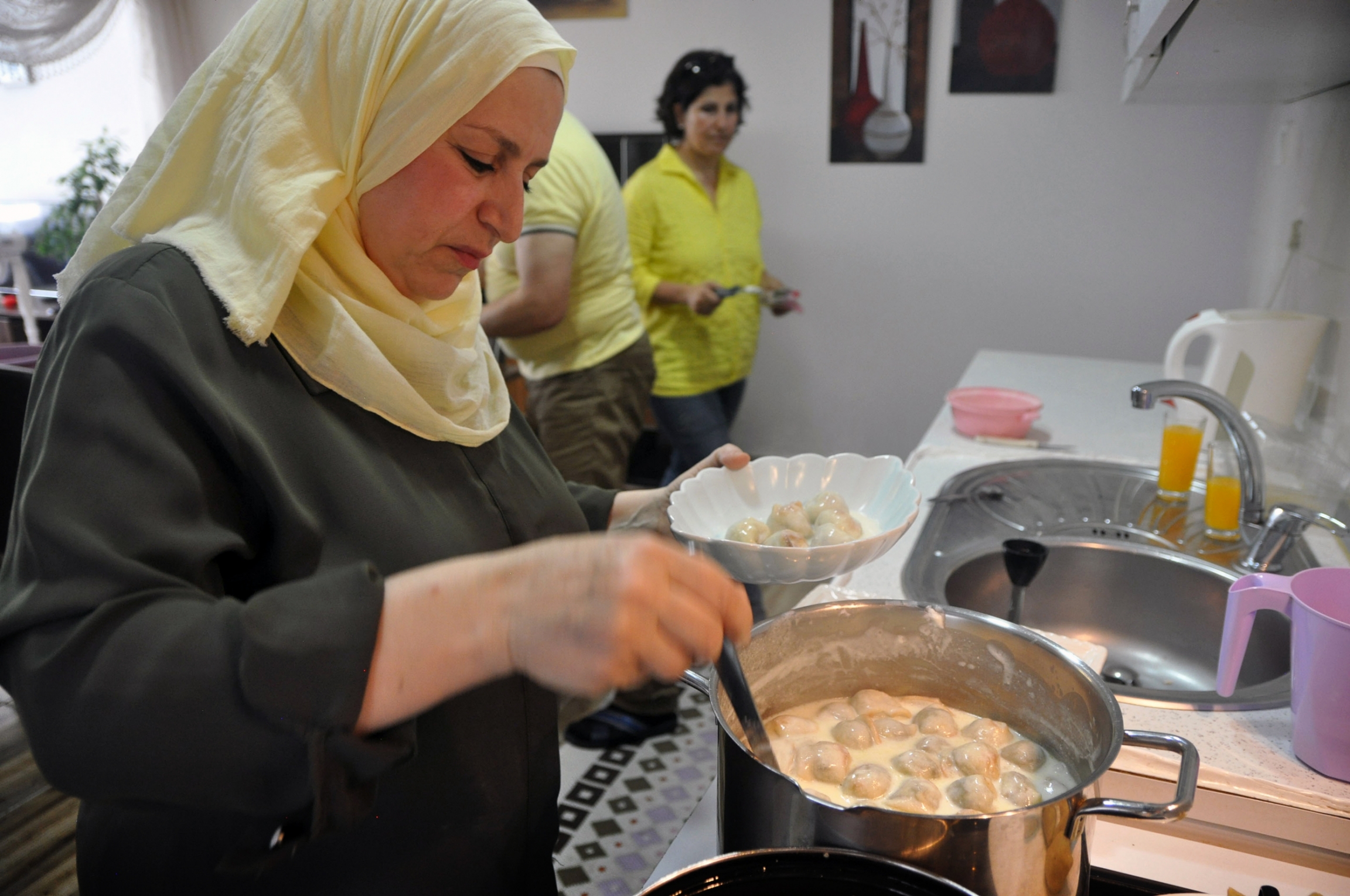 Samar al-Mallah stirs a pot of shish barak, a dish of toasted meat dumplings cooked in a savory yogurt broth and served with an aromatic rice blend.

In the meantime, Mallah has started a new Whatsapp group, to help other Syrian women start kitchens of their own. Together, they troubleshoot problems and share tips on decorating, marketing and dealing with customers.

“I like to have the chance to help others, to spread love,” she said. “Especially in this time when we have the conflict, it’s important to have these kinds of feelings.”

Translations were provided by Fatma Inceruh.