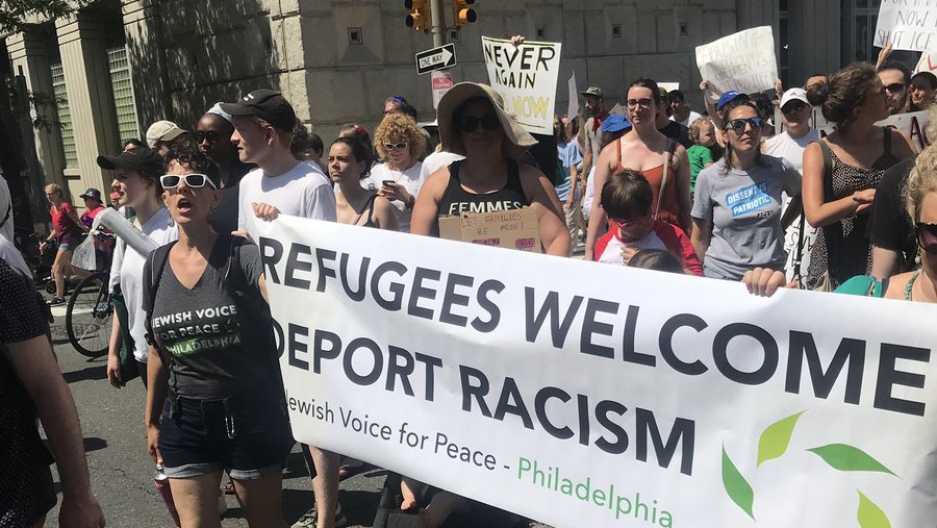 Jewish Voice for Peace is a grassroots organization whose stated goal is to work for equality and freedom for all people in Israel/Palestine. JVP has also actively advocated for closing the detention centers on the US-Mexico border.

Courtesy of Jewish Voice for Peace

The Trump administration's infamous family separation policy and images of children in detention centers on the US southern border have drawn broad international condemnation — but not without controversy. Recently, Congresswoman Alexandria Ocasio-Cortez called the detention centers at the US-Mexico border concentration camps. But is it appropriate to use language from the Holocaust to describe the crisis at the border?

These are concentration camps.

According to concentration camp experts, people begin to die due to overcrowding, neglect, and shortage of resources.

We saw all three of those signs on our trip yesterday. Another person died yesterday.

And those are the deaths we know about. https://t.co/MhujNAYohJ

Some Jewish activists think it is. They're saying "Never Again" to protest the detention of migrants.

There is a unique intersection for Latinx Jews who carry the intergenerational trauma of the Holocaust and see what's happening at the US-Mexico border to migrants.

Ari Belathar-Kulikovsky, a Mexican American Jewish person, started an open letter written in collaboration with Jewish Voice for Peace, a grassroots organization that works for equality and freedom for all people in Israel and Palestine and Mijentes, a Latinx advocacy organization. The letter calls for the Trump administration to close the camps on the southern border. It has been signed by more than a hundred Latinx Jewish people over the past several days.

"We are particularly heartbroken to see our children detained in detention camps reminiscent of the stories our parents and grandparents told us of the Nazi concentration camps.”

“We are Latinx Jews, and we will not be silent as our people are harmed and our histories repeated in the US government’s inhumane detention camps,” the letter reads. “We are particularly heartbroken to see our children detained in detention camps reminiscent of the stories our parents and grandparents told us of the Nazi concentration camps.”

Erica Taicz Blandón, a student at Harvard Law School, signed the open letter. She says that while she is not focused on calling the detention centers "concentration camps," she understands and supports the strategy behind that comparison.

"I'm a mixed child of Central American migrants from Nicaragua and [a grandchild of a Holocaust survivor] from Druya [Belarus],” Blandón says. “In my experience, when white Jews say 'Never Again' it has always meant 'Never Again [to other white Jews].' The American Jewish community needs to use that same history and energy to fight against concentration camps and separation of immigrant families, against ethnic cleansing of Palestinians in Apartheid Israel, and against the incessant policing, brutalizing, and caging of black communities in America.”

Blandón spoke with The World's Marco Werman about her activism and identity as a Latina and Jewish woman.

"... it's frustrating that people talk about the crisis like it's a new crisis."

Taicz Blandón: I'm on the board for the Central American Student Association across all the Harvard schools and one of the conversations we had the other day was how it's frustrating that people talk about the crisis like it's a new crisis. And my concern is that once a Democrat is back in office at some point in the future, the detention center conditions will be slightly improved, and everyone will say, "Well they're no longer this extreme image of a concentration camp in my mind, so it's all good." And I want to push people to see the detention centers, by themselves, that term alone, are horrifying — period — and that they're so worthy of your disgust and your sadness and your anger in their own right. And they always have been. But that said, I understand why the term is getting used.

"... the detention centers, by themselves, that term alone, are horrifying — period ... they're so worthy of your disgust and your sadness and your anger in their own right.

Marco Werman: It sounds like you've been considering your Jewish identity and what's at stake when you make these comparisons. Like you've been thinking about it a lot.

Definitely. You know, I saw a comment by a Jewish person the other day saying that protesting the border situation is the most Jewish thing that they've ever done in recent years. And, I mean, I would tell that person, you know, just wait and see how Jewish you can feel when you protest this very same, if not similar or worse policy, happening all over the place — including in Israel, which for me has always been a really big call to my Judaism.

I'm a little surprised to hear your attention is drawn to the situation between Israelis and Palestinians, comparing it to the situation along the southern border. I mean, that's a territorial dispute, it's not people coming over the border seeking safety and freedom, right?

When I went to Palestine, I saw firsthand that my Palestinian friends were also forced to carry their ID cards at all times because soldiers with guns, soldiers in an acclaimed Jewish state would stop and question them at every corner.

I would say that I'm not the only one who's drawn this connection between Palestine and the US Mexico border. You know, even putting aside the US Mexico border for a moment, I don't think you can talk about the Holocaust in remembrance today without talking about Palestine. For example, I was raised constantly hearing about how Jewish families like mine were forced to carry their ID cards at all times because soldiers with guns were stopped and questioned them at every corner. When I went to Palestine, I saw firsthand that my Palestinian friends were also forced to carry their ID cards at all times because soldiers with guns, soldiers in an acclaimed Jewish state would stop and question them at every corner. And I saw Palestinians that even slept with their ID cards tucked in their pajamas, just in case there's going to be a midnight inspection. Even though I would love to stay and talk to you guys about my grandfather's family that was murdered in Druya two generations ago and how that impacts me and my work today, because I do think that's an important story and I would love to share that part of my identity with you, I find it's impossible not to use this time to focus on the very active harm by a Jewish state, which is happening to Palestinian families of this generation.

Do you think there is additional harm in making those comparisons because perhaps one group's tragedy almost diminishes the other group's?

Let's leave the border out of this. Generally, do you feel like you've got two identities, and are they clashing right now or are they almost complementary?

I think that it has taken me a while to get to this point where they feel very complementary. When I was growing up I was raised in an extremely Jewish environment, even though there were not a lot of Jewish people where I was raised. We didn't even have a temple, we had, like, a church that we put like a blanket over the little baby Jesus and the cross and like rented out that space a couple of times a week. And it wasn't until I left the home and went to college that I got a lot more involved with my Latinidad. Today I have a happy middle ground, I guess, where, I don't know, I just, I do what I do. And I believe that what I do is rooted in both my Latinidad and my Central American backgrounds and in my Jewish background and a lot of people would disagree with me in terms of what I think Judaism promotes and what I think is quote-unquote Jewish. But that's OK. It's just sort of — it's my interpretation and my understanding of what it means.

This interview has been edited and condensed for clarity. An earlier version of this story misspelled Erica Taicz Blandón's name.