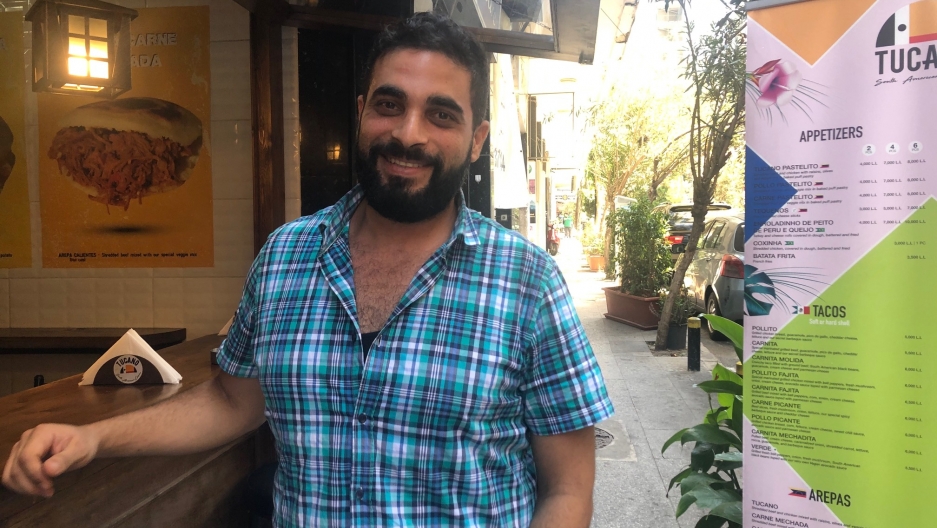 Firas Yordi, a Venezuelan of Lebanese descent, in front of his new restaurant in Beirut. He returned to his parents' homeland last year amidst Venezuela's financial crisis.

What finally pushed Firas Yordi to leave Venezuela last year wasn’t the shortage of food and medicine, or the loss of his family’s once-profitable businesses, or rising insecurity.

It was a kidnapping attempt on his four-year-old son. In mid-2017, two men on a motorcycle tried to snatch him outside the family’s factory, likely for ransom.

“Luckily there were many of us inside and we ran out and stopped them,” Yordi recalls. He sent his family out of the country and looked at options to leave Venezuela.

But unlike most of the 4 million Venezuelans who have sought refuge in neighboring states, Yordi ended up much further afield — in the Lebanese capital, Beirut. He became one of a growing number of Venezuelans of Lebanese descent doing a reverse migration, fleeing Venezuela's financial crisis and finding refuge in the country of their ancestors.

Yordi’s father emigrated from Lebanon to Venezuela 50 years ago after fleeing escalating tensions and financial instability. By the time he arrived, Venezuela already had a sizable and successful Lebanese community.

“I never thought I would be living and working in this country."

“I never thought I would be living and working in this country,” Yordi says of Lebanon. “My father came from a very humble background. It was tough times in Lebanon back then, and violence was happening.”

A history of Lebanon-Venezuela migration

The first Lebanese immigrated to Venezuela in the 1860s. Then, in 1915, the Great Famine of Mount Lebanon struck. As many as 200,000 people died, and tens of thousands more fled what had been the Ottoman Empire. Thousands headed for promised lands of Latin America, where many already family.

Then, in the 1960s and 70s, a third wave on Lebanese immigration headed toward South America as Lebanon’s neighbors went to war. Today, more people of Lebanese descent live outside Lebanon than within it, and millions of them are in Latin America. Lebanon’s own population is 4 million.

Yordi’s family thrived in Venezuela. They had several mechanic shops and a factory that made beds and mattresses.

On his phone, Yordi scrolls through pictures of their life before the crisis — scuba diving, family vacations, weddings and their two-story home with a pool.

“Business was well and life was very well for years and years, but then it started to deteriorate,” he says.

Things got tough, but the Yordis stayed, not wanting to give up everything they had built.

Yordi tears up as he tells about his decision to leave.

“I love Venezuela, it’s not something I can hide. It’s where I grew up. It’s where most of my friends still are.”

“I love Venezuela, it’s not something I can hide,” he says. “ It’s where I grew up. It’s where most of my friends still are.”

A year ago, he arrived in Lebanon for the first time, in a homeland he’d only ever heard about in stories from his parents.

“This has been the most difficult thing — starting from zero and feeling like you lost everything you had done in your life before,” Yordi says.

Venezuelans 'start from zero' in Lebanon

Last year, Yordi opened Tucano, a small restaurant in central Beirut, with another Lebanese repatriate who came from Brazil. They serve traditional Venezuelan arepas and empanadas along with other Latin American foods such as tacos and burritos. 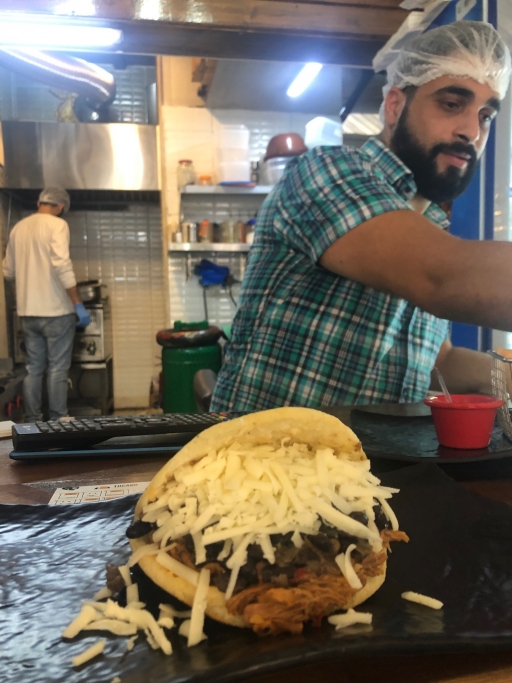 Firas Yordi makes an arepa sandwich at Tucano, his new restaurant in Beirut.

On the counter next to the cash register are two bags of Venezuela’s iconic P.A.N, a popular brand of boiled maize flour. Spanish-language music pours out onto the street in the Lebanese capital. Inside, Yordi flattens the corn flour dough with hands to make arepas.

It’s not clear how many Venezuelans of Lebanese descent have repatriated to Lebanon since the crisis in Venezuela started, but Yordi says hundreds have come by his restaurant for a taste of home.

“Most of my clientele here at the restaurant were born in Venezuela and moved to Lebanon,” he says. The Venezuelan embassy says around 11,000 of its nationals are registered in Lebanon, but there are no numbers on how many are Lebanese or how many might others might not be registered.

On top of the new wave of Venezuelan repatriates, Lebanon hosts more than 1 million Syrian refugees and hundreds of thousands of Palestinian refugees.

Just after Yordi’s father moved to Venezuela half a century ago, war broke out in Lebanon, and the country was devastated. Yordi’s father used to send money back home to his struggling family.

Now, Yordi says that trend has reversed, and he is sending money to his parents in Venezuela, who stayed behind after he moved his young family to Lebanon. They were too old to uproot their lives again, he says. His father has diabetes, and his mother recently suffered a stroke.

“It’s not easy to find a lot of the medicine there,” Yordi says. “My father needs three types of insulin because he’s diabetic, which are hard to find in Venezuela. We try to send the medicine from here or from the United States.”

Yordi is not sure if he’ll ever move back to Venezuela, the only country he knew until just a year ago. Everything is so uncertain, he says.

But he also knows in some ways he is lucky: Most refugees don’t have another country that will welcome them home.