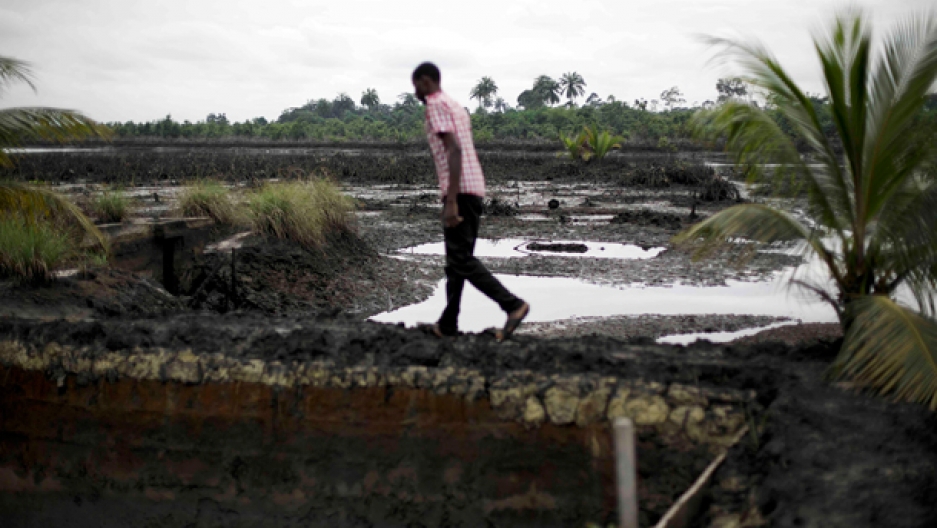 The aftermath of the Kegbara Dere community oil spill in Ogoniland, Nigeria. Widespread reports of environmental and economic damage to the Niger River Delta caused by the activities of Royal Dutch Shell have angered the local population since the 1990s.

This May, Esther Kiobel came one step closer to justice in her battle against the Royal Dutch Shell Oil Company.

Kiobel has pursued the oil giant for nearly 25 years, since the Nigerian government executed her husband in 1995 on trumped-up charges, allegedly in collusion with Shell.

Kiobel’s husband, Barinem Kiobel, was part of a group known as the Ogoni Nine, activists who fought against Shell for environmental and economic damages to their homeland near the Niger River Delta. The Ogoni Nine were eventually detained, tried under suspicious circumstances and sentenced to death, prompting global condemnation.

After her husband’s execution, Kiobel was forced to flee Nigeria, along with Victoria Bera, a co-defendant in the case whose husband was also executed, explains Mark Dummett, Amnesty’s head of business and human rights. Kiobel came to the United States and Bera was accepted as a refugee in Canada. Many other Ogonis who had been involved in the protests also fled the country.

“At least two of the other women who I'm in touch with have stayed in Nigeria,” Dummett says. “All of them have faced a very difficult time because not only did they have to deal with the loss of their husbands and their husbands' incomes, but they also faced harassment and threats from opponents of [the movement], including some of the prosecution witnesses.”

Related: How a tomato shortage has Nigerians questioning their reliance on oil

The Niger Delta, in southeast Nigeria, is Africa's most valuable oil-producing region. The area has become a scene of widespread environmental devastation as a result of massive amounts of oil pollution.

“Oil fields are scattered across the area, connected by pipelines which have generally been poorly maintained. ... Hundreds of oil spills occur every year and they have had an appalling impact on the people living there.”

“Oil fields are scattered across the area, connected by pipelines which have generally been poorly maintained,” Dummett explains. “Hundreds of oil spills occur every year and they have had an appalling impact on the people living there.”

The Ogoni Nine were among a group of protesters from the Ogoni community who started a popular movement against Shell and the Nigerian government — not just against the pollution, Dummett says, but also against the unfair distribution of oil wealth. All the money generated by the oil fields went to other parts of the country and to oil corporations based in other countries.

In response to this protest movement, the Nigerian military launched a brutal crackdown on the Ogoni region and arrested many people.

In response to this protest movement, the Nigerian military launched a brutal crackdown on the Ogoni region and arrested many people, Dummett explains.

“Many women and girls were raped, people were shot, killed, prisoners were tortured,” Dummett says. “In the midst of this, the government accused Ken Saro-Wiwa, who was the leader of the movement, and a number of his supporters, of involvement in the brutal murder of four chiefs who were opposed to the protest movement. On the basis of very flimsy evidence, they found Ken Saro-Wiwa and eight others guilty of this brutal murder or involvement in this brutal murder, and then executed them.”

At the time, Amnesty International and other human rights organizations and activists around the world publicly condemned “this completely unfair trial and the execution of innocent men.”

The trial was a sham in a number of ways, Dummett says. The men were arrested and held for many months without being allowed to see their lawyers; the evidence used to prosecute them was based mainly on the testimony of prosecution witnesses, two of whom later recanted and said they had been bribed by the Nigerian government and Shell to say that Ken Saro-Wiwa and the other men had been responsible for the murders.

While Dummett acknowledges there is little evidence to implicate Royal Dutch Shell directly in the executions, he says he has seen “hundreds of documents and hundreds of pages of court depositions which point to an incredibly close relationship between Shell and the Nigerian government at all levels."

“We know that Shell had its own surveillance operation and that these operatives had received training from Nigeria's Internal Security Agency ..."

“They operated as business partners. We know that they shared information about the protests,” he explains. “We know that Shell had its own surveillance operation and that these operatives had received training from Nigeria's Internal Security Agency, which itself was directly responsible for a number of human rights violations, such as arbitrary killings, rape, destruction of property, burning of homes — not just crimes under international law or human rights violations, but also crimes under domestic law.”

“We're not alleging that any evidence exists for individuals working for Shell at the time to be in the room when protesters were being tortured,” he says. “What we are saying is that Shell played a key role in those crimes occurring through encouraging, through soliciting and through providing the tools by which these crimes were then carried out by the Nigerian state.”

Today, Shell still denies any involvement in the matter and has released a copy of a letter it claims the company sent to President Sani Abacha calling for him to show leniency and not to proceed with the executions. Amnesty has seen no evidence that the letter was actually sent or received, Dummett says, but Shell's own records of meetings with the Nigerian government show that the company never raised concerns about possible executions or any other human rights violations they knew the military had committed.

In addition to human rights issues, “the damage done to the environment from early in the days of oil production in Nigeria through to today is hugely important to understanding the protests,” Dummett says. Saro-Wiwa was successful in mobilizing the protests because “he articulated so well how environmental problems are also human rights problems and social justice problems.”

“You have these poor communities that are relying on fishing and farming and then all of a sudden an oil field is discovered on their land or in their waterways,” he explains. “What’s happened since then is that the waterways where they fish and the fields where they farm and the forests where they hunt have been polluted. … Then, the money that comes from the oil disappears and they don't benefit from that, either.”

Last year, Amnesty did more research into Shell's current operations in Nigeria and found there are still many dozens of spills every year. “We believe there's strong evidence that Shell is still not maintaining its pipelines properly,” Dummett says.

The case Kiobel and Bera have brought against Shell is civil, not criminal. They are asking for compensation, but they have made it clear, Dummett says, that “their primary goal is to get justice, to get a recognition that their husbands are innocent.” They're calling specifically for a public apology from Shell and Kiobel has said she would not be interested in only a financial settlement.

“Their emotion is very raw and they are suffering hugely from the injustice to this day,” Dummett says. “They’re still on the books in Nigeria as criminals and it hurts them that it's taken this long for them to get any kind of hearing in a court."

Even now, however, Dummett acknowledges the difficulty the case presents, largely due to evidence that Shell retains, which the court will have a hard time persuading them to release. “There's a huge power imbalance between the two sides — the companies on the one hand, which retain the evidence, and then, on the other hand, the victims,” Dummett says.

Should the women prevail, Dummett believes it will carry a couple of important messages. The bravery and persistence of the women would be “a message of hope to activists and victims of human rights violations around the world.”

The other message would be to Shell and to other multinational corporations, wherever they operate and wherever they are based, Dummett says.

“We know in this globalized world that companies operate across boundaries and that's one of the reasons they’re able to escape justice,” he explains. “Justice systems haven't quite caught up with that and find it hard to hold companies to account for any kind of negative harm from their operations and indeed from their business models.

“If this case goes in Esther and Victoria's favor, then this will be a precedent for a company being held accountable for operations that took place on another continent, two decades ago,” he concludes. “I think that would be an incredibly powerful message.”

Living on Earth contacted Royal Dutch Shell for a statement about the allegations against them but they declined to comment on ongoing litigation.