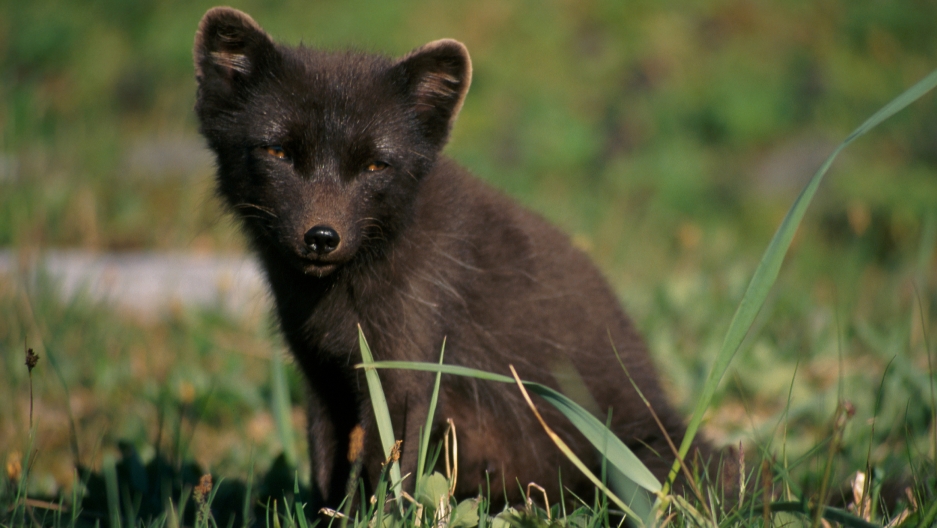 An arctic fox of the blue color morph is seen in Svalbard, Norway, in this undated photo. Researchers tracking movements of arctic foxes found one female traveled more than 2,000 miles in just 76 days.

Norwegian scientists at the Norwegian Polar Institute fitted around 50 coastal or blue foxes with tracking collars to find out how much they depended on sea ice to get around. While observing the foxes' movements, the scientists noticed something extraordinary: In just 76 days, one of the arctic foxes traveled overland from the Norwegian island of Spitzbergen to Ellesmere Island in the Canadian territory of Nunavut. That's an average of about 30 miles per day.

The trek was among the longest for the species and set a speed record.

Harald Steen, a scientist working with the Norwegian Polar Institute, spoke with The World's Marco Werman about the fox's epic journey. 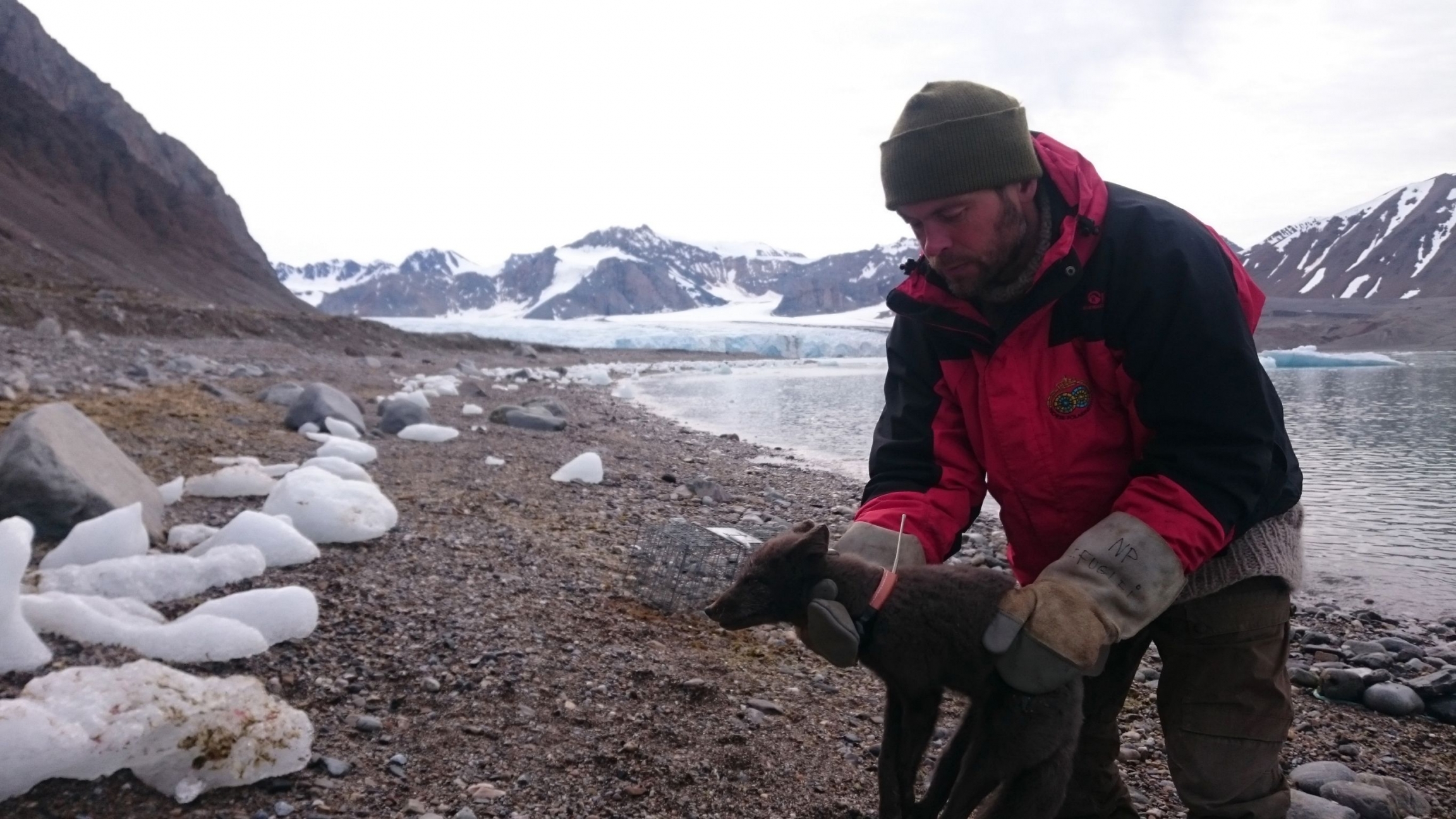 A researcher in the Arctic holds an arctic fox wearing a tracking collar.

Marco Werman: This is kind of mindblowing. How surprised were you to learn that this arctic fox traveled more than 2,000 in such a short time — 76 days?

Harald Steen: It's pretty amazing because we have never documented that such a long journey.

The fox had a tracking device on her. What did scientists at your institute think when they kept seeing that she was traveling so far and wide?

Well, you just say, whoa. First, you say, "Something is wrong. It's got to be hitching a ride with something."

Yeah something like that, but obviously this one wasn't because it started to behave like it like a fox. It did what it should do. [It] stopped a little bit, got something to eat, and kept on living.

Related: The Arctic's Sámi people push for a sustainable Norway

The speed was pretty extraordinary, about 28 miles a day on average. Some days I read she traveled a hundred miles. Was she running a lot of the time? Is that how you can account for some of these distances?

They have this trot, this kind of short galloping thing, which it seems they can do forever — it seems hardly an effort at all. It can cost them a lot since they only weigh 2.5-5 kilos (5-11 pounds).

It's limited, how much fat and energy you can actually store in that body. So, it's just amazing how energy efficient they are.

How dependent was this fox on sea ice to get from the Norwegian island of Spitsbergen to Ellesmere Island in northern Canada?

Well, I'll just explain a bit about where Svalbard is. If you take Oslo or Copenhagen and then you traveled about an hour and a half on a jet plane, then you arrive at the northern tip of Norway. Then you jump on a new plane and ride for another hour and a half due north, then you end up at Svalbard. It is about 80 degrees north, the northern tip of it. So, we are way up north. But still, there's the Gulf Stream that brings warm water up in that region that melts the ice. This fox traveled first eastwards, quite a distance. Then it got on the drift ice. Then it moved north and started to move west again. She made a long arch just tracking the ice, basically. So yes, she's completely dependent upon the ice to actually do that journey. 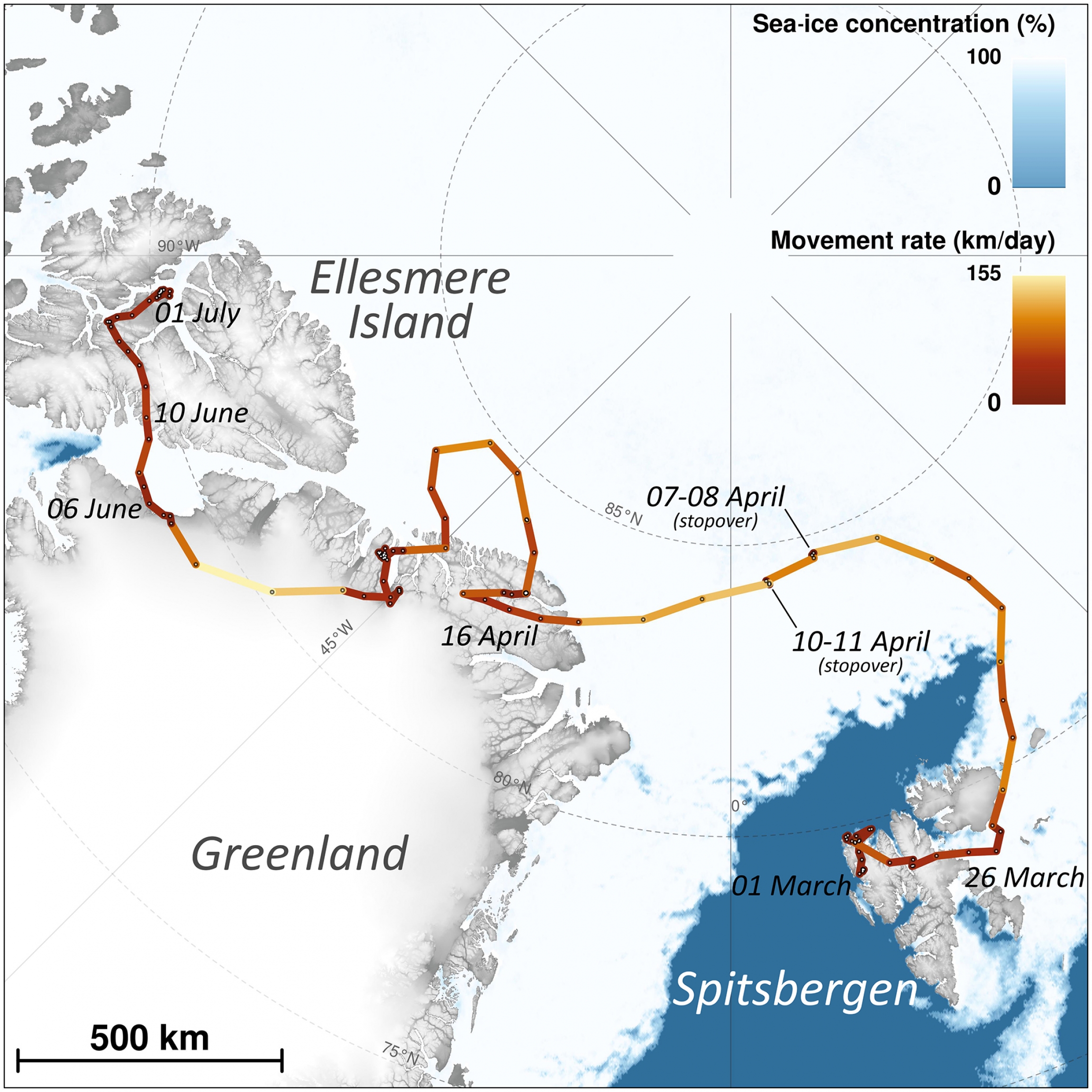 The route of the arctic fox from Spitsbergen in Norway to Ellesmere Island in Canada.

Not walking across the ice, but actually getting on a small piece of floating ice and drifting?

I have to ask you this: If climate change deniers use this as evidence and say that there's clearly enough sea ice in the Arctic because a fox walked across it from Norway to Canada, how would you respond to that?

We are experiencing very little sea ice up there. If it had been normal or what it was, [the fox] would have walked just straight west basically from Spitsbergen and wouldn't have to do that detour far east to actually get on the ice.

Tracking devices were placed on some 50 arctic foxes in Norway but this was the only one that ventured out of the country. What does that tell you?

In pretty much all animal groups, there are always stray individuals that go on trips. We see it in just about anything that we monitor, that some go on long journeys. They are the long-distance dispersers. They are those that are creating new populations and those that are moving genes between populations far apart. Those have always existed and probably will always exist. Exactly what triggers it, we don't really know. Normally, if you had asked me before knowing that this was a female that went, based on my biological background, I would guess that it had been a male that did it. They tend to move more, so that a female does is rather surprising in my mind.

Foxes are not dogs, but they are in the larger family of dog-like animals. Dogs have been known to travel long distances, often with a purpose. Is there anything you can extrapolate using the parallel with dogs?

Not really. I don't think she knew where she was going. I think she was just moving, putting one leg in front of the others as fast as she could.

Related: Faced with climate change, Canadian Arctic residents fear their way of life is melting away

Putting one leg in front of the others very quickly. Have you given a name to this fox yet?

No, it's not my study. I stay away from those things.

What has happened to this arctic fox? Do you have any idea where she is now up in Canada?

The last knowledge was Ellesmere Island and the collar probably fell off. Then you lose track of it.

So this one arctic fox is a real surprise that she traveled so far, but what was the original intent of the study when these tracking devices were put on these 50 some-odd foxes?

This fox was tagged in connection to a study that we wanted to do in with working on tidewater glaciers and the disappearing fjord sea ice that we experience now in the Arctic. We wanted to see how dependent the coastal foxes are on the sea ice and how much they used it. That was the purpose of the study. This is a complete byproduct.

This must have been a fun byproduct to get out of the study.