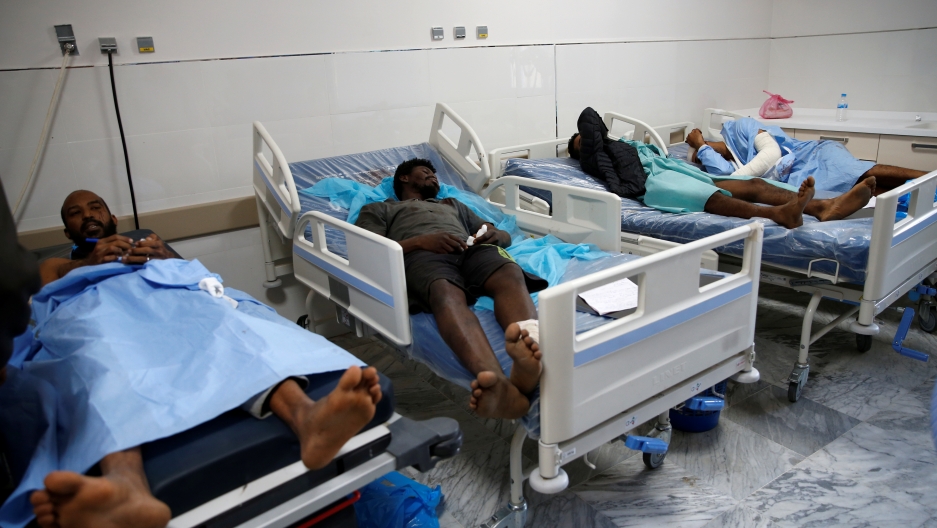 A war crime: That's how the United Nations' envoy to Libya describes what happened there Wednesday

An airstrike killed more than 40 migrants in a detention center near the country's capital of Tripoli. The attack is blamed on forces loyal to the warlord Khalifa Haftar, who has been trying to seize control of Tripoli since April. The UN has called for an independent investigation of the bombing, which claimed the lives of women and children and is one of the biggest single losses of life since the civil war in 2011.

The airstrike also puts a spotlight on the detention centers in Libya and the migrants who find themselves trapped in Libya's dangerous civil war — especially as European nations refuse to allow in migrants rescued at sea and force the Libyan Coast Guard to take them in and return them Libya if they attempt to cross the Mediterranean.

Sam Turner heads aid efforts in Libya for the aid group MSF, or Doctors Without Borders. He spoke with The World's Marco Werman about the experiences of migrants there.

Sam Turner: One thing that we have to be very clear on is that these are not camps. These are not humanitarian shelters. These are not locations of safety. There is no safe place for the people who are trapped, who are locked up. They are detained in these centers much like a prison.

The World: Have you actually visited the Tajoura migrant center that got hit by this airstrike?

Yes, I've been a number of times. Most recently was just following the last airstrike on Tajoura detention center, which was in May. And fortunately, in that one there were far fewer casualties. But a piece of shrapnel was thrown through the roof of the women's cell and landed on the ground just a meter away from where a baby was sleeping on a mattress on the ground.

After this attack the survivors in the camp are in shock, they're traumatized. What can you tell us about the people who are being held there?

They're from all over the world. Most predominately East Africa but also West Africa. Also, there's a number of coming from the Middle East, so fleeing warzones in places like Syria or coming from as far afield as Bangladesh.

We've also heard about a lot of migrants who get rescued in the Mediterranean trying to get to Europe and then are sent back to Libya, where they came from. How many migrants in that kind of situation are at Tajoura?

Absolutely. This is something that has been a key component of the EU and EU member-states' very cynical policies to support the Libyan Coast Guard to intercept those boats that are trying to make the crossing and return them to detention centers in Libya. Over the course of the conflict, which has now been raging for three months of fighting in the city of Tripoli, we have seen thousands of people who have been intercepted at sea and returned to detention centers even whilst there is conflicts raging around the city. And even though that detention center has already been hit once — and now in the last 24 hours has been hit again with horrific results.

Some people have blamed the carnage to draw on the EU for failing to have a uniform policy in place for resettling refugees and migrants. Is that fair, do you think?

It is not just a failure of not having a uniform policy to resettle refugees and migrants from Libya. But it is the policy to ensure that they are returned to those very same detention centers. And at the very least, complicity in their silence of politicians who are happy to see the current situation continue because they believe that it acts to dissuade other refugees and migrants from attempting to make the crossing.

As far as the abysmal conditions in these detention centers in Libya, I have to ask you this: We've been getting reports of migrants languishing in US government facilities along the US-Mexico border. We've learned that these conditions did not start under Trump but that Trump is letting the situation get worse. Obviously what happened in Tripoli is beyond the pale. But how much do countries look at the example the US has been setting and believe that they can do the same with impunity?

I think the role of these international leaders is incredibly important in influencing what people think they can get away with across the world. And that's not only in their very concrete example of detention centers themselves but also the way that we talk about people who are on the move. To consistently vilify them and use language that dehumanizes them is clearly setting a trend across the world in terms of how people feel that they are able to manage these people and manipulate them for their political gain.