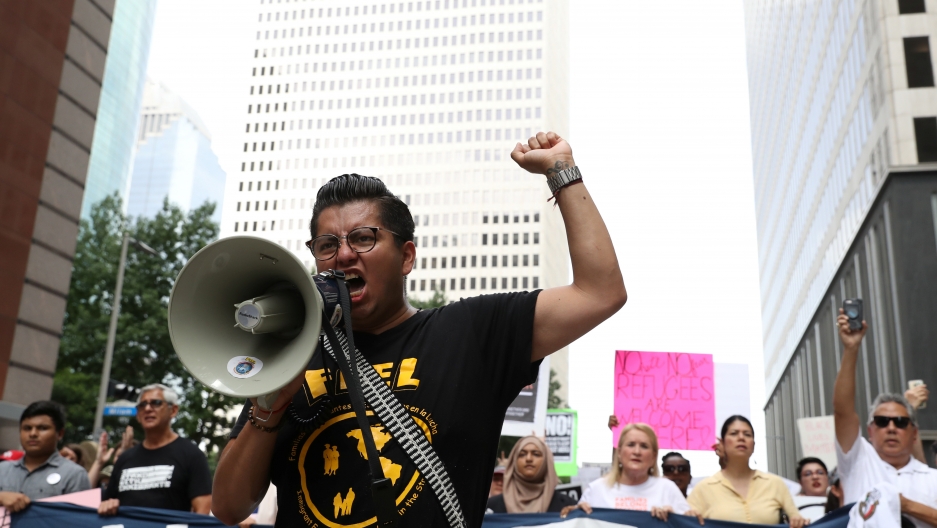 Cesar Espinosa, an immigrant rights' activist and head of FIEL, leads demonstrators protesting the Trump administration's immigration policies as part of a "Families Belong Together" rally in Houston, Texas, June 30, 2018.

President Donald Trump has delayed the mass deportations he had threatened would start this week. They were to target undocumented people who already had deportation orders or had missed court dates, and they were also to focus on families. The president said the deportations would now be postponed for two weeks — and in the meantime, he is pressuring Democrats to commit to an immigration deal.

But people in several major cities are still bracing for the deportations.

Cesar Espinosa is the head of FIEL, the largest immigrant rights group in Houston. The group has been fielding hundreds of calls and running workshops for people at risk of deportation.

He spoke to The World’s Marco Werman about how they've been preparing people for raids — regardless of when and whether Trump says they are happening.

Marco Werman: The president has delayed this, but are you still bracing for raids and deportations at some point?

Cesar Espinosa: The president's tweets have exacerbated the concern and anxiety. People are calling — they’re flooding in our office calls, they’re flooding our inboxes. But at the same time, we have a trained staff that's talking to folks, and we want folks to know that they should craft an action plan and call their friends and family members to be there for them in case any of this does happen.

The other thing that unfortunately we're also receiving is false reports of raids happening. So we have deployed a rapid response team all over the city of Houston, in the greater Houston area, that will go out and verify these reports. Unfortunately, with social media, some of these things can go viral and can cause more panic.

But it sounds like you are still bracing for the possibility of raids and subsequent deportations.

"Our community and ourselves need to be ready to respond to anything that we need to do."

We are, because of the fact that the president in his tweet said that he was going to give Congress two weeks to fix asylum laws. And unfortunately, we have also lost faith in Congress to enact anything because of the partisanship issues that exist. So, therefore, we know that in two weeks something else is going to come back. And our community and ourselves need to be ready to respond to anything that we need to do.

If ICE were to show up at someone's home or place of work what are you recommending people do?

We are recommending that No. 1 ... people do not open the door if immigration comes to their house. They have the right to have immigration or ICE present a judicial warrant as well as an ICE warrant to make sure that they both signed by judges so then that way they can see that these orders are real and that they are really looking for that person.

No. 2 is we're asking folks to remain silent. Anything that they can say at that time can and will be used against them in immigration court. So we ask people to just say in a very firm voice, “Under the Fifth Amendment, I have the right to remain silent. I'm choosing to exercise that right.” And No. 3 is that they do not sign any documents pertaining to any deportation — or anything, really. Because a lot of these documents can contain very difficult legal language to understand. And it could be in the language that folks don't necessarily feel comfortable in reading or speaking. It's also important that they record these interactions because we also want to make sure that we hold ICE accountable if they are overstepping their boundaries or they're doing things that they're not supposed to, they're questioning other people in the home.

So individuals have the right to record their interactions with ICE or any immigration officials?

They do have the right to record these interactions. Yes.

Has the delay in the deportation action changed the advice that you're giving to people?

The advice does not change. We want to make sure that we take this not as an opportunity to hide in fear — but rather as opportunities to show that we're resilient and that we're gonna turn a very bad situation into a very positive situation to where we can get our community prepared. We've been very bold in letting people know that we are also undocumented, that I am also undocumented, so that other people can know that if we — if I don't back down, then they shouldn't back down either. And we need to assert our dignity and our rights as human beings and our ability to be here and be here to stay.