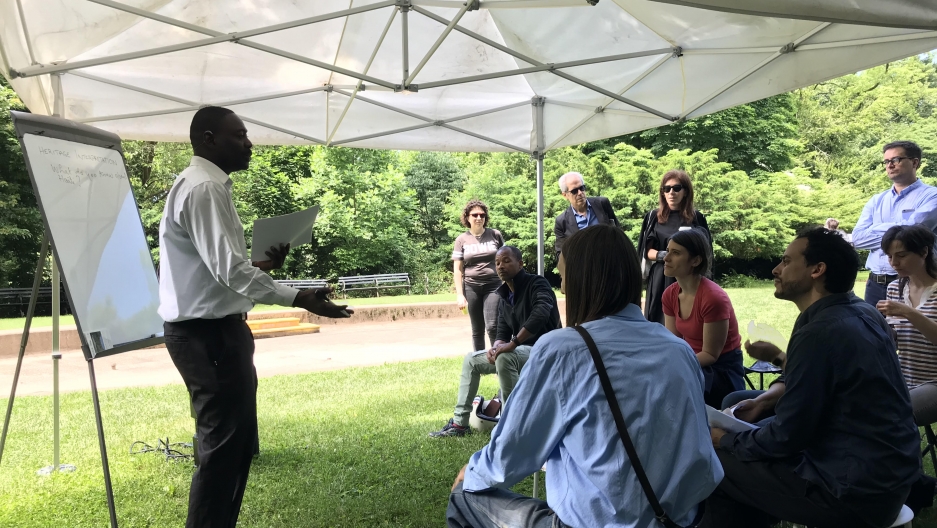 Kenrick Demesvar, an immigrant and summer lecturer with Open Air University, discusses the history and preservation of Sans-Souci Palace in his home country of Haiti.

Prospect Park in Brooklyn is often packed, but its Rose Garden — a grassy hollow built around two old fountains — is an oasis of calm.

On a recent afternoon, it’s walled off by a thick patchwork cloth hanging between tall wooden posts. To get inside, you’re forced to double back several times. Soon people get frustrated and start ducking under the barrier. The art installation is a metaphor about the difficulty immigrants face getting to the United States and making it here.

According to the Brookings Institution, immigrants with a Bachelor’s degree who have come to the US over the past 10 years are more than 50% likelier to be overqualified for their jobs than are American-born workers. Many immigrants with degrees such as doctorates end up taking low-paying "survival jobs" that require little education.

To highlight that issue and immigrants' expertise, the Brooklyn Public Library and Prospect Park Alliance launched a three-week pilot program called University Open Air. Those leading the free classes are immigrant teachers, researchers and professors who are experts in those topics — but who have often had to settle for lower-skilled jobs in the United States.

They teach a variety of topics, ranging from such as intersex activism and the migrant caravans from Central America, to Moroccan business law and how to think like a data scientist.

“Immigrants who came here pretty much giving up their entire lives and careers,” says Jakab Orsos, the library’s vice president of arts and culture. “Most of them never had the opportunity to teach their subject.” 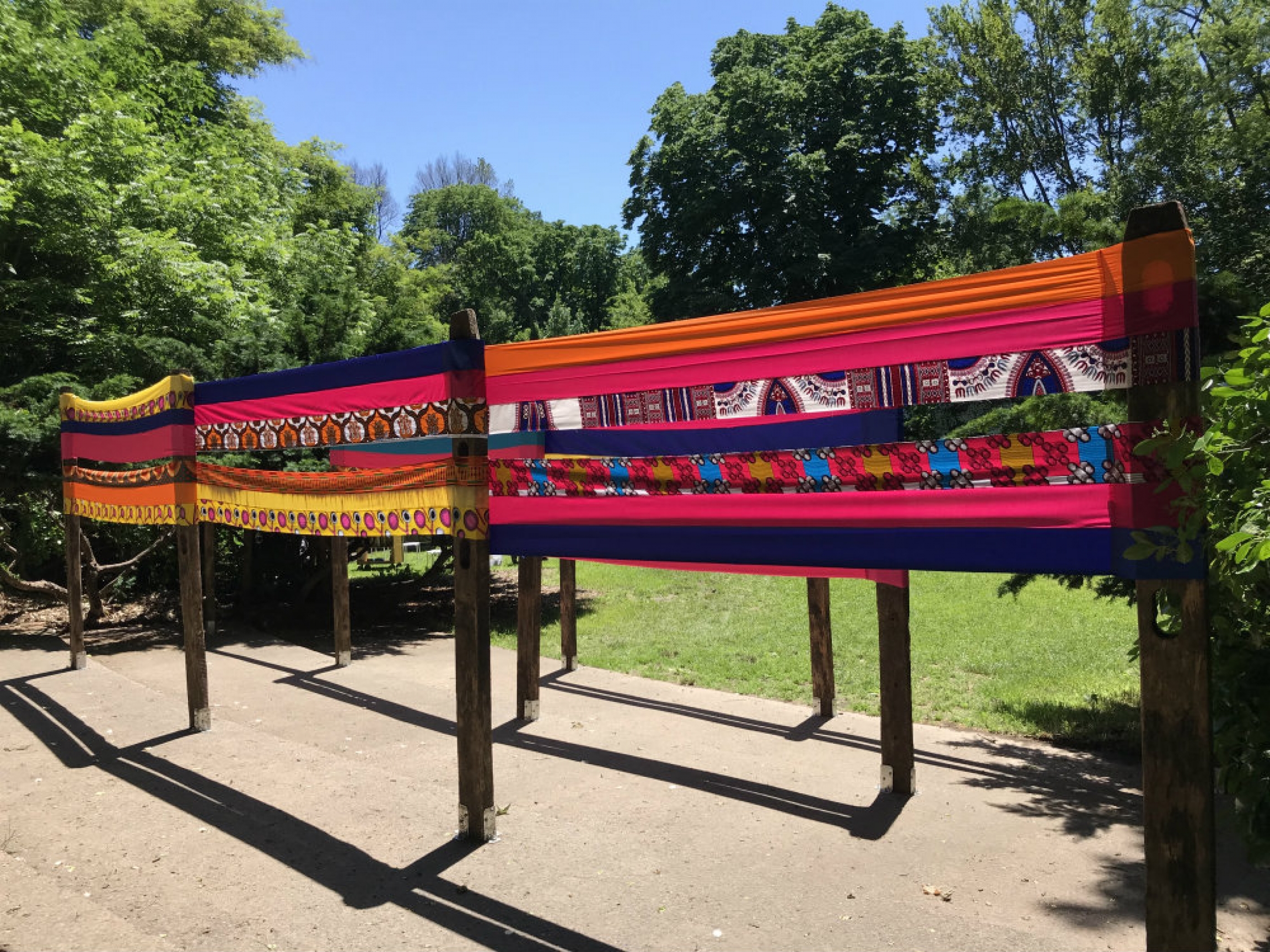 Artist Ronen Gamil's installation, titled "Threshold," forces visitors to double back several times in order to enter Prospect Park's Rose Garden while offering glimpses of the park beyond. The piece is a metaphor for the challenges immigrants face getting to America and succeeding in their new home.

For Orsos, himself an immigrant from Hungary, the idea was inspired by an experience familiar to just about anyone who’s been a tourist in New York.

“You sit in a cab, and it turns out that your driver is a poet,” Orsos says.  “Or your server at a restaurant is a scientist from another corner of the world.”

Learning can happen in a taxi or in an open field — such as the setup at Prospect Park — where tents are set up to block the summer sun with a few dozen folding chairs. On one afternoon, the professors of the day — who hail from Pakistan, El Salvador and Haiti — must also cope with the constant noise of planes overhead.

But no one complains. 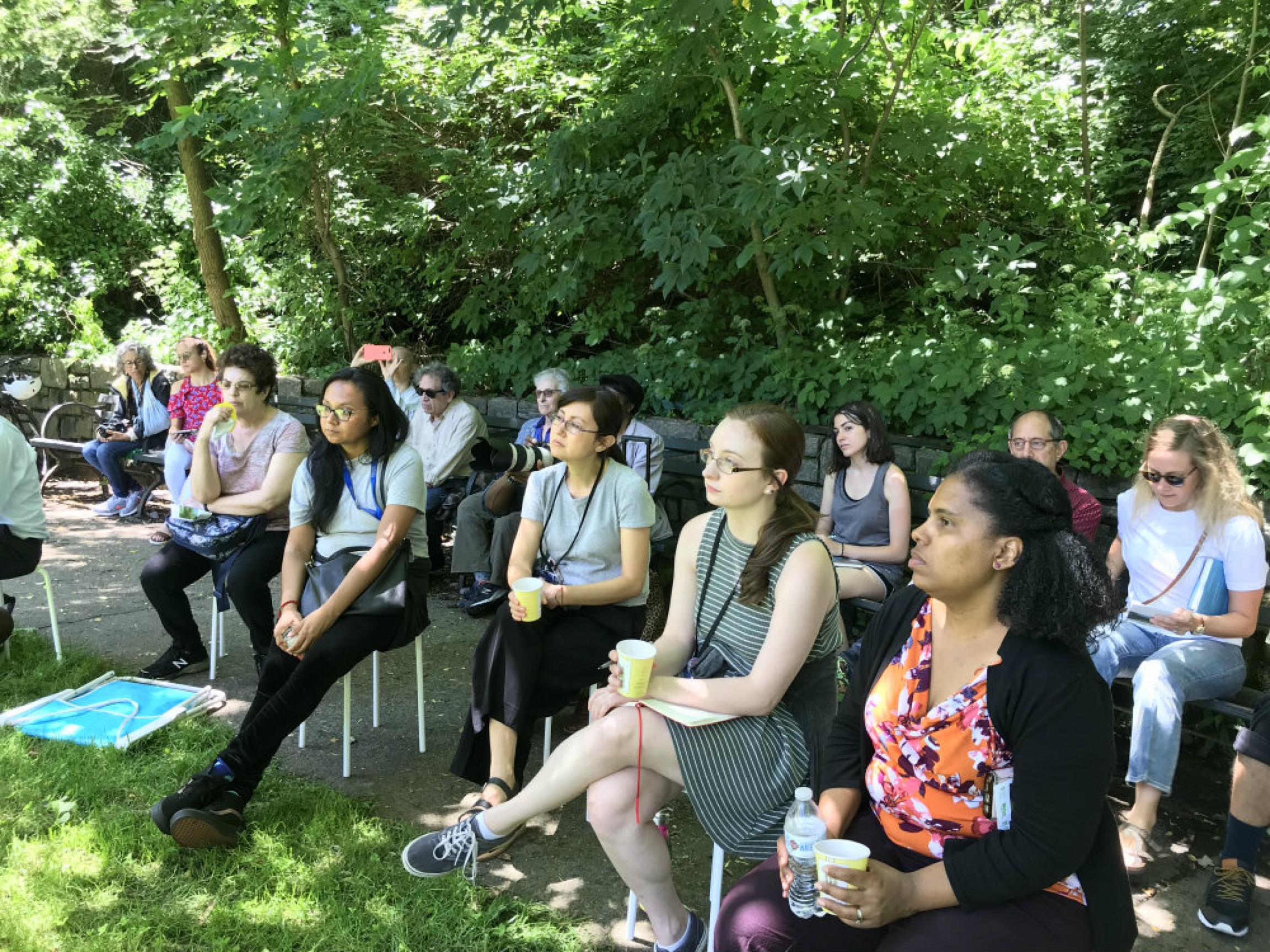 Kenrick Demesvar talks about the history and conservation of Sans-Souci Palace, the only UNESCO World Heritage Site in his home country of Haiti. Demesvar came to the US after earning a doctorate in cultural anthropology and wanted to find a job at a university. That was five years ago, and he says he feels like he is “still in a transitional period."

But he never stopped looking for opportunities to get back to doing what he loves, he says, and that’s meant looking beyond LinkedIn. Demesvar sees Open Air as an unorthodox way to showcase his skills and “an opportunity to network.” 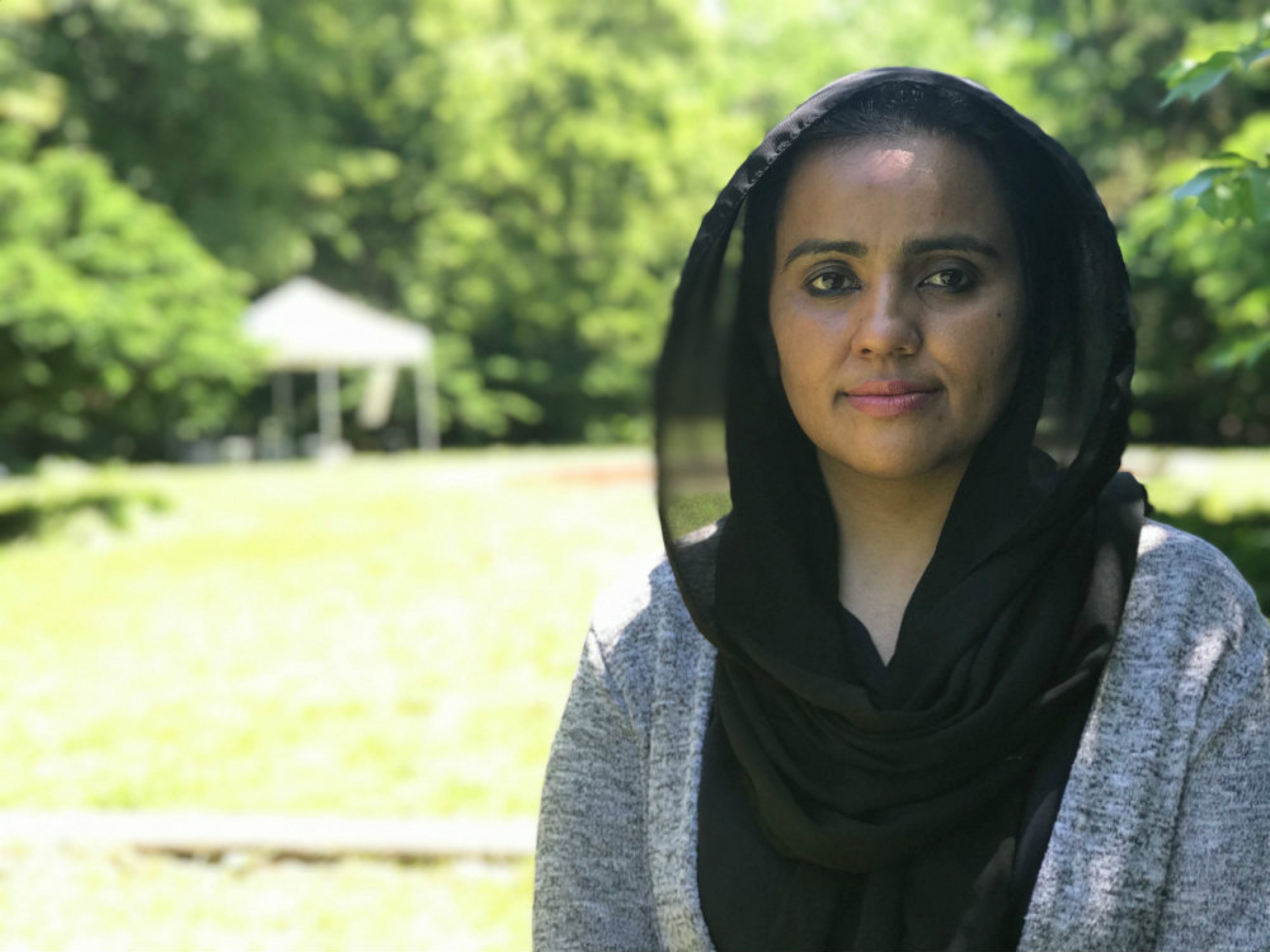 Nadia Bokhari, a journalist from Pakistan, is teaching a class called Origins of Islam as part of Open Air University in Brooklyn, New York.

On the other side of the park, Nadia Bokhari, a journalist originally from Pakistan, speaks to a small crowd about the origins of Islam. She says she feels like Americans’ views of Islam have been distorted by coverage of radical clerics and terrorists. Her mission is to eradicate the word “Islamophobia.”

“I don't know who created this word, because the word 'Islam' means peace,” says Bokhari. “It's a weird translation. Like, peacephobia? Who says peacephobia?"

The library is trying to spread the message not just about “peacephobia,” but also about the skills that the immigrant lecturers bring.  Human-resources specilalists from local universities and teacher training colleges sit in on Open Air classes.

With registration already full for most classes this summer, Orsos says they are already planning a winter semester — this time indoors. 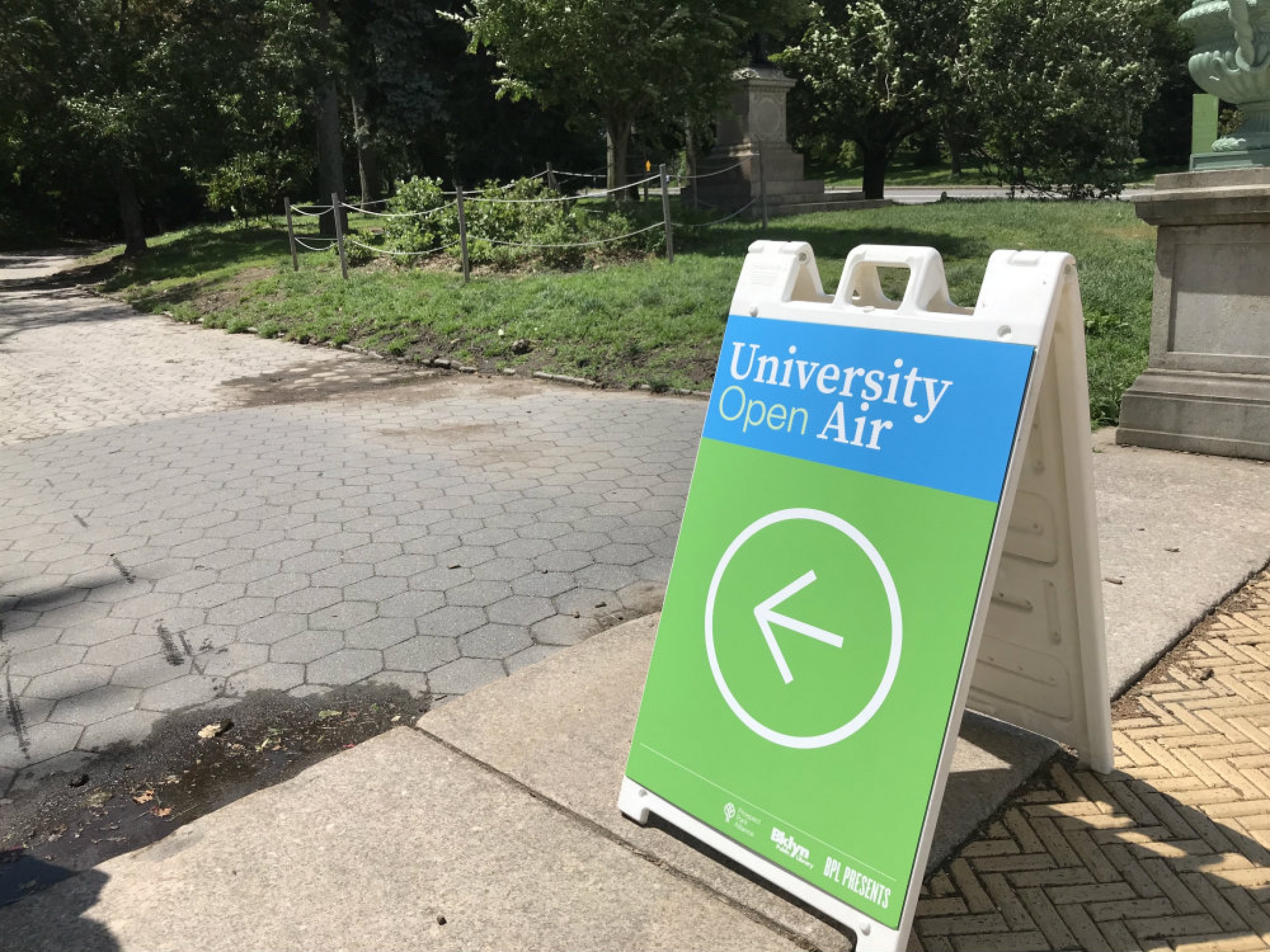 A sign for "Open Air University" points attendees to where free lectures take place in Brooklyn's Prospect Park. Immigrant and refugee teachers, researchers and academics provide pop-up classes on a range of topics — from the sciences to humanities.

Recently, Orsos says, he interviewed a recent immigrant from Russia who is now working as a baker, but wants to teach philosophy.

“He came to the interview, his hands were all doughy,” Orsos says. “In ten minutes, we were talking about subjects, like serious philosophical subjects. Having a baker explain with his hands, gesticulating, it just put the entire thing in a different perspective."

That baker is Pavel Illin, and he’s among the Open Air University lecturers. According to the online course catalog, his class will cover "challenging limitations, overcoming fears, exploring the nature of the universe, and the endless attempts we make to define who we are.”