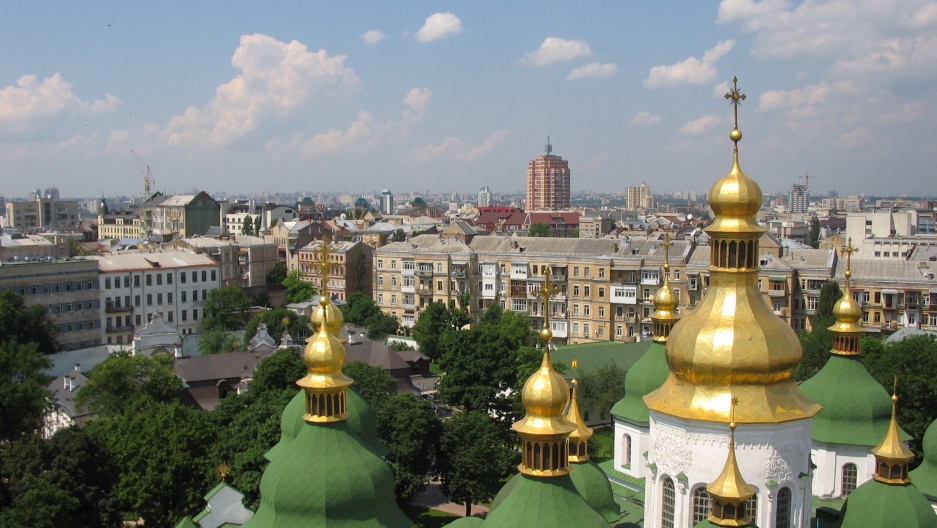 View of the city as seen from the belltower of the Saint Sophia Monastery in Kyiv, the capital of Ukraine.

If you're an avid reader of The World and follow Ukraine news, you may have noticed a shift in the way we refer to Ukraine's capital. Early this year, The World newsroom adopted the Ukrainian transliteration of the city — Kyiv — replacing the Russian-derived Kiev, a longtime standard of international news media.

This week, the United States Board on Geographic Names followed suit, following a decade-long push by the Ukrainian government to popularize the Ukrainian spelling.

Global #KyivNotKiev wave continues: the influential United States Board on Geographic Names has become the latest international body to adopt the official Ukrainian-language transliteration and ditch the Soviet-era spelling of the Ukrainian capital cityhttps://t.co/TZj6a6tpF3 pic.twitter.com/RY7a4p5brc

“We feel that our country and the name of our capital is visible in a right way to Americans and this is very important to us Ukrainians,” says Oksana Horbach, director of StratComm Ukraine, an organization that reforms government communication.

Ukraine's Ministry of Foreign Affairs tasked StratComm with popularizing the correct Ukrainian spelling internationally. Their plan focused on a narrow approach — choose the 10 busiest airports in the world and the 10 most popular media outlets, and spark change through a social media campaign using #KyivNotKiev.

In response to #CorrectUA campaign, Manchester Airport has just informed that starting from today it will be using the correct spelling 'Kyiv' to denote the capital city of #Ukraine. Enjoy direct flights from Manchester to #KyivNotKiev. Thank you @manairport! pic.twitter.com/y9XW29e4zy

“We actually launched a separate post directed at each particular individual airport or media outlet asking them directly to use the correct way of pronunciation for our capital,” Horbach says. “So we requested help from [the] Ukrainian population, from Ukrainian society and community around the world. And it became widely, widely popular.”

More popular, even, than a decade of government initiatives.

“It turned out to be more effective than [a] press release, direct diplomatic letters and meetings and everything else. Social media made the trick,” Horbach says.

While to the untrained ear, Russian and Ukrainian may sound similar, they are distinctly separate languages. Still, most Ukrainians speak both languages fluently. So, why do a few vowels matter — especially in foreign transliterations of Cyrillic scripts?

For many, the question of how the world hears and reads the country's capital is not a linguistic debate. It also has to do with asserting Ukrainian sovereignty.

"The desire for self-identification and correct visibility became something that is very important for us Ukrainians.”

“The idea behind the campaign goes back to like 25 years ago when we became independent,” Horbach says. “The desire for self-identification and correct visibility became something that is very important for us Ukrainians.”

Ukraine gained independence from the Soviet Union in 1991. Prior to the USSR, the territory was part of the Russian Empire. Centuries of Russification policies stressed the primacy of Russian in official life, whereas the Ukrainian language was often banned or subjugated in public life.

“This erasure of Ukraine was further supported in the West by the frequent Cold War-era practice of equating the whole USSR with Russia,” University of Washington anthropology professor Laada Bilaniuk writes, adding that well into the 2000s, British and US news outlets mistakenly placed Ukrainian cities in Russia. 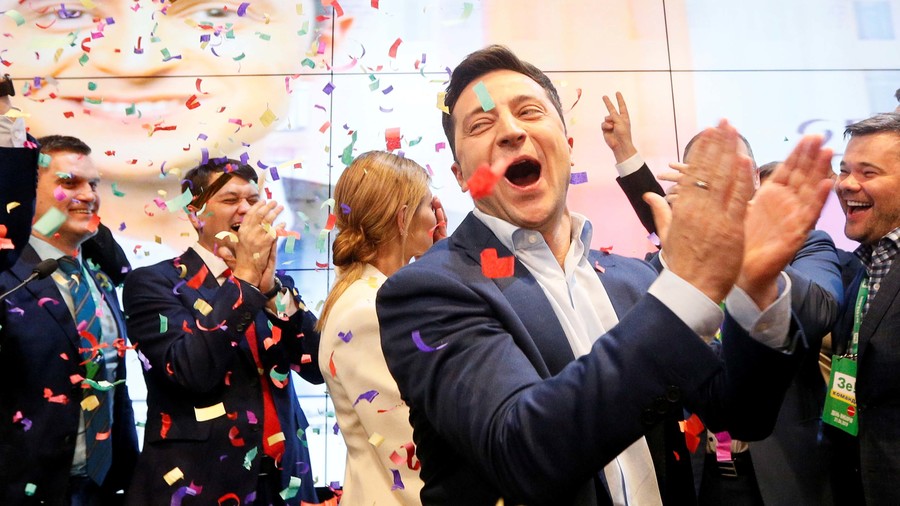 Language and ethnicity have been fault lines in the country, and the Ukrainian government has tried to shore up the strength of Ukrainian as the official language — sparking ire and action from Russia. But Ukraine's recently elected president, Volodymyr Zelenskiy — himself from a Russian-speaking city in Ukraine — ran on a platform of unity. He even posted videos of himself "bulking up" his Ukrainian at the gym, Bilaniuk told The World.

"Even all these presidents who have been Russian-speaking recognize the power of the Ukrainian language as a symbol of Ukraine's sovereignty."

"Even all these presidents who have been Russian-speaking recognize the power of the Ukrainian language as a symbol of Ukraine's sovereignty," Bilaniuk says.

For centuries, Ukrainians have also dealt with monikers such as “Little Russia” that have contributed to a regional identity struggle or a "younger brother complex" in modern discourse. Now, particularly after Russia's 2014 invasion of Crimea and a continuing war with Russia-backed separatists in eastern Ukraine, that struggle is playing out on the map. In 2017, separatists in eastern Ukraine claimed to have created a new country called Malorossiya — the Russian version of the term — playing into the contested rhetoric of Russia and Ukraine as so-called "brotherly nations."

“Well there is definitely a lot of emotions going on right now because you know the relationship between our countries right now is not easy,” says Horbach. But she adds that the #KyivNotKiev campaign is less about current politics, “but more about the self-identification and the correct labeling and naming and visibility of our country.”

And Kyiv is not the first problematic naming convention to have been changed in the West. Until Ukraine gained independence from the Soviet Union in 1991, it was broadly referred to as “the Ukraine” in English.

Some scholars have argued that “the” inclusion derives from contested entomology meaning “the borderlands." But its continued use detracted from Ukraine's sovereignty as an independent state, signaling that the country was rather a region of Russia and undermining Ukrainian independence.

Horbach says next steps for the campaign will be to popularize Ukrainian spellings of other cities too. Some cities, like Lviv (Lvov) and Kharkiv (Kharkov) have already preceded Kyiv in their Ukrainian transliteration in international media.

Bilaniuk says that some Ukrainians are likely wondering why the government is focusing on symbolic things like spelling and pronunciation, when there are bigger issues, like corruption at hand. But she also says it's important, especially for people in the Ukrainian diaspora. "To have the US government recognize [Kyiv] is another step in recognizing Ukraine's existence and nationhood."

But Horbach is still a little wary of the verbal chaos that might ensue.

“I think it will take some time for Americans to get used to that pronunciation,” Horbach says. “But eventually I hope they will cope with that and do just fine.”