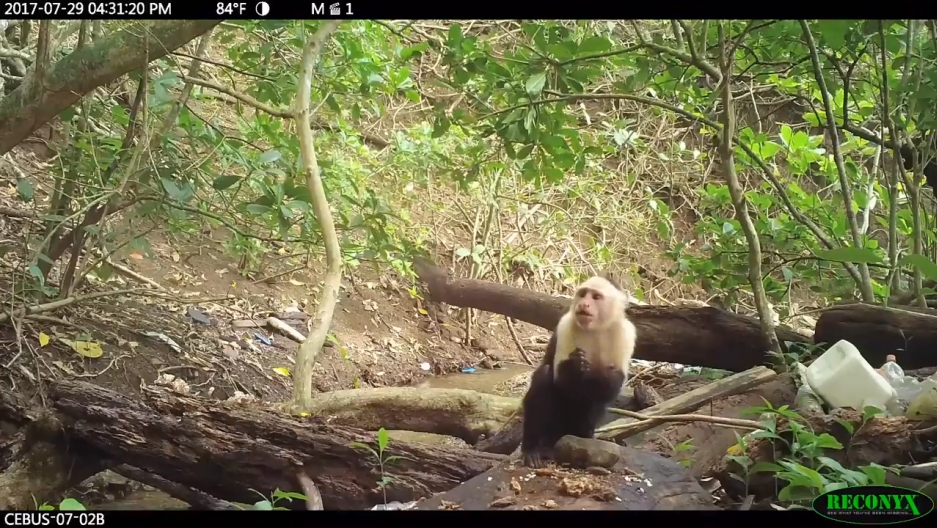 It’s the end of a long dry season on the islands of Coiba National Park, a marine reserve of 38 islands near the Pacific coast of Panama. Leaves crunch underfoot as Claudio Monteza leads a team of researchers over a dry stream bed.

Monteza grew up in David, a city near the Pacific coast in Panama, and about 70 miles away from Coiba Island. The smell of the forest here reminds him of the little patch of forest near his childhood home. Now, he’s is a PhD student at the University of California, Davis, and he’s on Coiba to study animal behavior.

The roaring calls of a howler monkey sound through the trees. But Monteza is more interested in another kind of monkey here — the capuchin monkey.

They’re about the size of a house cat. They scream at the researchers, shake branches, show their teeth. This whole display seems bold, but with no large predators on these islands, these monkeys are used to having free reign of their territory. As a result, they spend a lot of time on the forest floor, and a few years ago, Monteza says scientists working here noticed something strange. 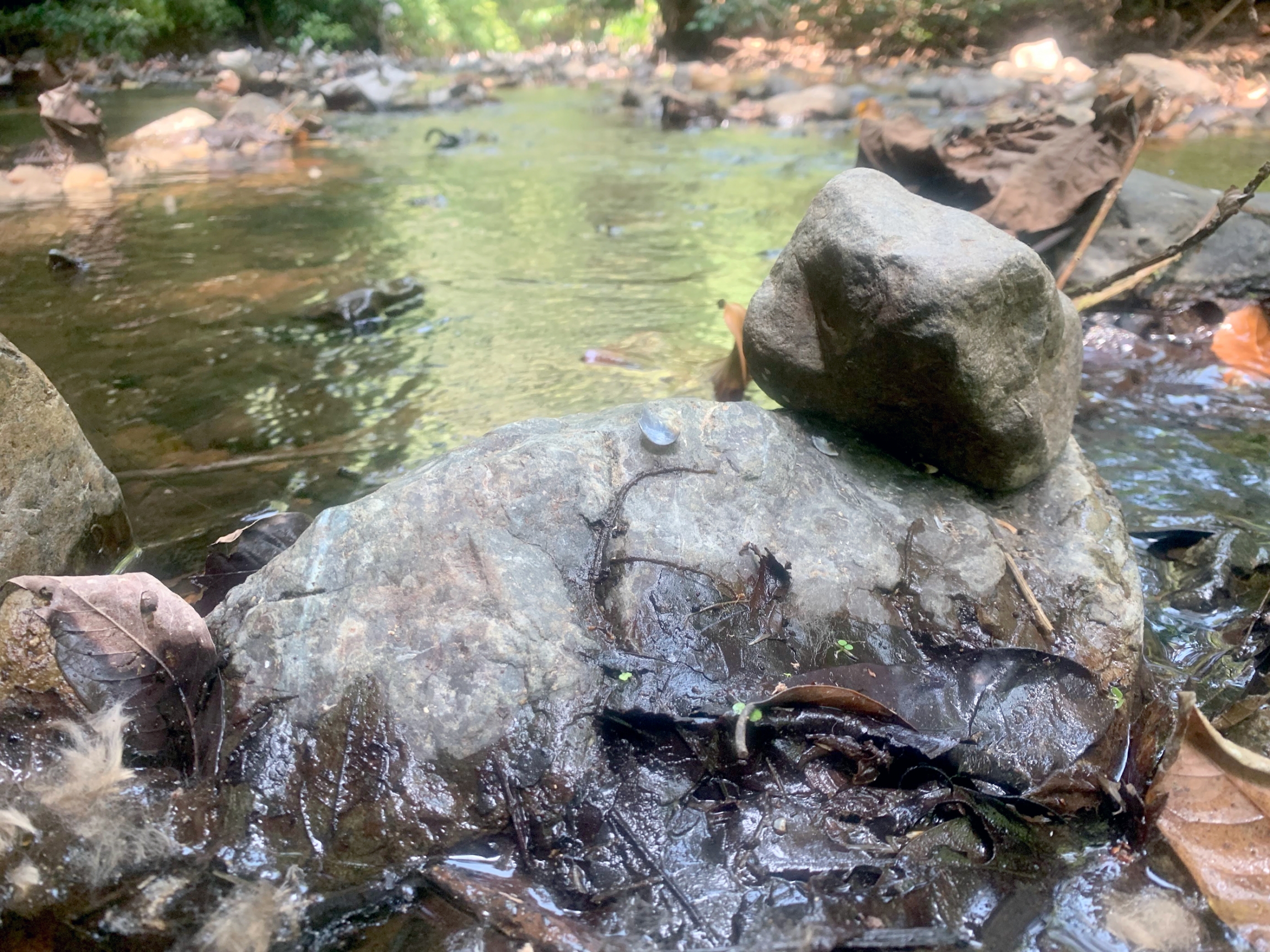 The two stacked rocks and the snail shell are evidence of how these monkeys are using these stones as tools. The monkeys sometimes use a small rock in one hand like a hammer. Other times they pick up a larger stone with two hands and drop it like an anvil.

“Well it’s a very abstract, but it’s basically a stone on top of another stone,“ Monteza says. “But when you think about the way things are on this river, stones are hardly on top of each other. And on a few occasions, stones were surrounded by snail pieces.”

The snail pieces seemed to be a hint that there was a purpose to these stacks of stones. So Monteza set up some cameras to see what was going on. In the videos he captured, capuchin monkeys place snails, clams, and nuts on a large, flat rock and then use a small stone to hammer them open. Sometimes they come waddling up on two legs with a big stone in both arms and drop it like an anvil.

The capuchin monkeys have started using stones as tools.

“This is really unique.  ... It’s the first time this particular genus of Cebus monkeys has ever been seen to use stone tools in any way shape or form, so it’s a really exciting discovery.”

“This is really unique,” says Meg Crofoot, director at the Max Planck Institute of Animal Behavior in Germany and leader of this project. “It’s the first time this particular genus of Cebus monkeys has ever been seen to use stone tools in any way shape or form, so it’s a really exciting discovery.”

Related: A new study has found that 60 percent of primates are nearing extinction

No one knows when or how the monkeys learned to do this. And the few people who’ve been here in recent decades probably weren’t paying much attention to the monkeys. 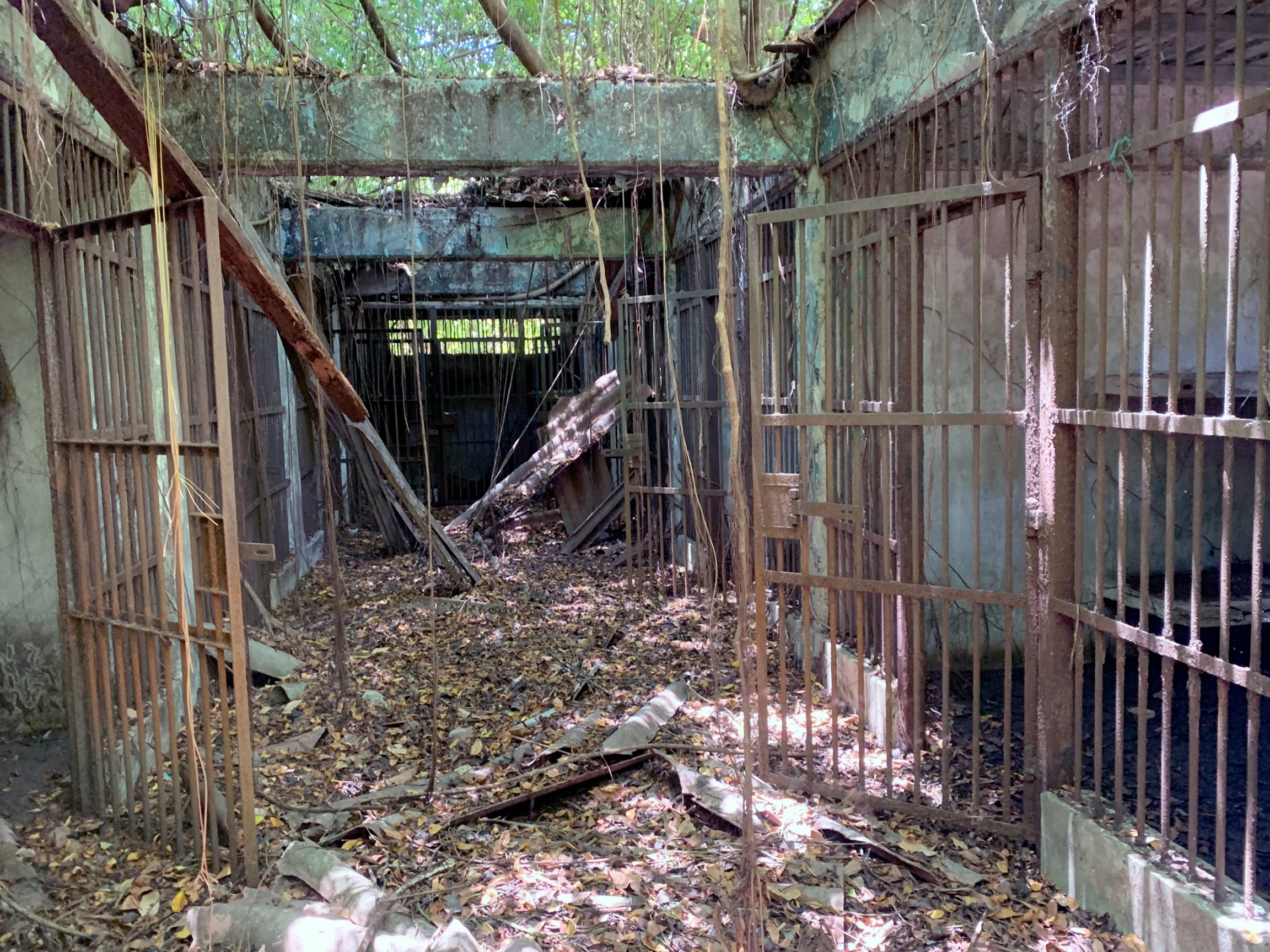 After prisoners were relocated in 2004, camps scattered across the islands closed and fell into disrepair. The forest is slowly regrowing around the buildings. Vines hang over all the cells, roofing material and dry leaves litter the ground.

For nearly a century, some of these islands were used as a prison colony. About 3,000 prisoners were incarcerated in about 30 camps spread around the islands.

The research group encounters one such camp on the way to set up more video cameras.

Vines hang down from what’s left of the roof. The bars on the windows are covered in rust. Faded writing is scrawled across the walls of the cells. Monteza has a hard time making them out, but they say something about asking for compassion, forgiveness, and love.

The prison kept people away from the island, inadvertently protecting the natural forest. The whole island chain became a national park in 1995. Then, the last prisoners were relocated in 2004 and the archipelago became a UNESCO World Heritage Site in 2005. Meanwhile, forests on Panama’s mainland were chopped down and clear-cut for agriculture and development. 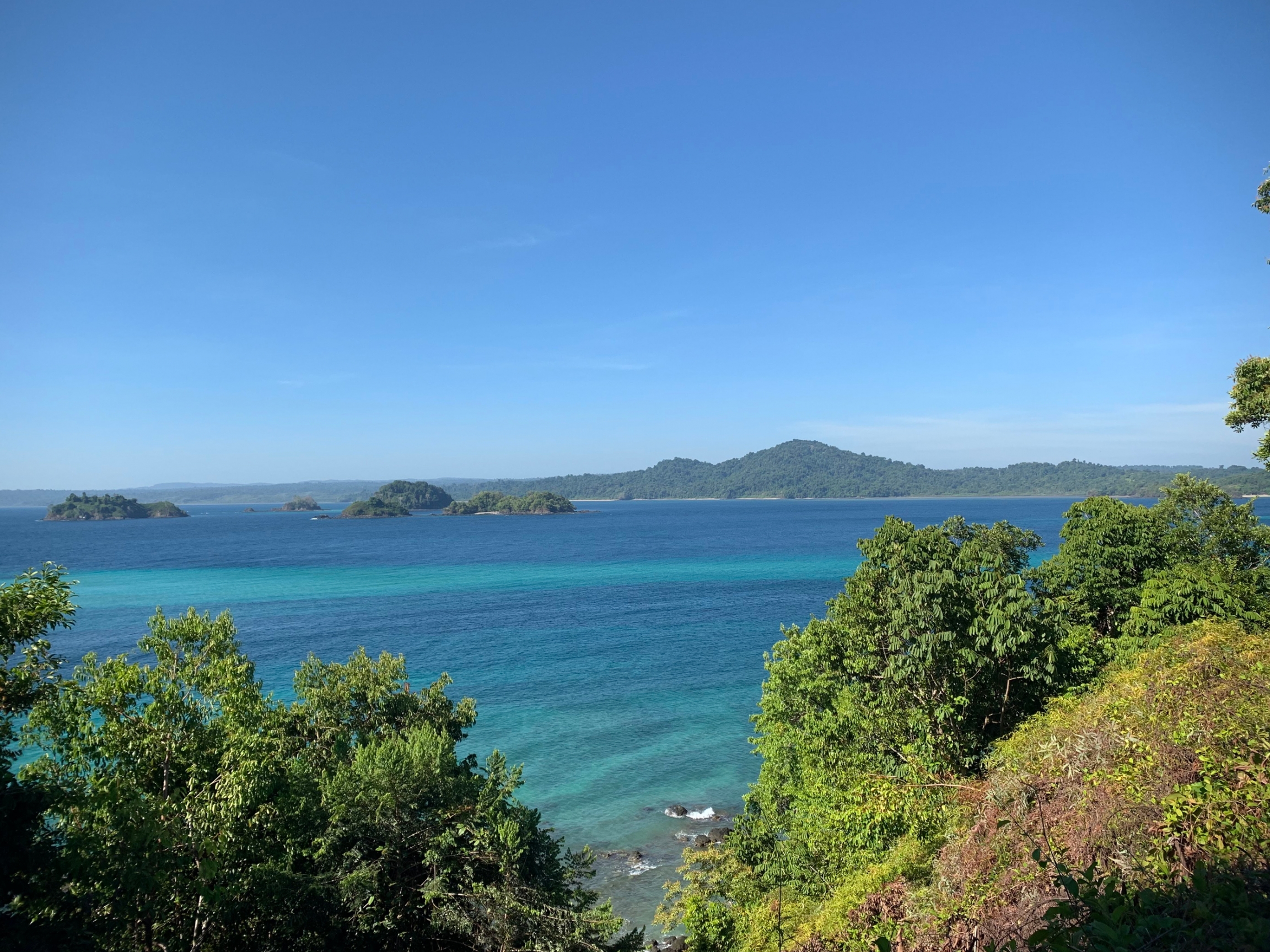 The 38 islands that make up Coiba National Park along with the Special Zone of Marine Protection in the surrounding waters became a UNESCO World Heritage Site in 2005.

Now the islands are special to researchers, who are still making discoveries here because the forests are pristine and undisturbed. Estimates say between 80% and 85% of the forests are untouched by humans.

In 2018, scientists first observed the monkeys using tools on only one of the 38 islands in the. But after the first week of this trip, scientists found evidence that capuchin monkeys were using stone tools on this island — the behavior could be more widespread than they’d thought.

"I think that potentially finding this on another island in the archipelago supports that there’s something about islands that favors foraging innovation and especially tool use," explains Brendan Barrett, a researcher at the Max Planck Institute for Evolutionary Anthropology and the lead author on a paper about the capuchin monkey tool use. "So I think there’s something definitely about islands that really changes the incentive structure to bear the cost of trying to figure out such a complicated behavior. Whether it’s resource limitation, seasonality, or the absence of other competitors that opens up ecological niches and allows animals to use new resources in different resources."

The monkeys and their stone tool use have Meg Crofoot thinking about how behavior could affect the future of these animals and the rest of the world.

Despite its isolation, this island ecosystem is facing some of the same pressures as the rest of the world. Climate models predict that tropical forests like these are going to get warmer and drier. That means new challenges for their inhabitants. There’s also concern about growing pressure from tourism. Everyone’s thinking about the future here.

“When you lose a place like Coiba National Park, you lose this connection to who we are as a species and you lose an opportunity for understanding where we came from and how we got to where we are,” Crofoot says.