When Gaelle Asheri first started playing soccer in the dirt streets near her home in Cameroon's capital, she was the only girl on the informal neighborhood teams which used stones for goal posts and kept score by chalking results on a wall. 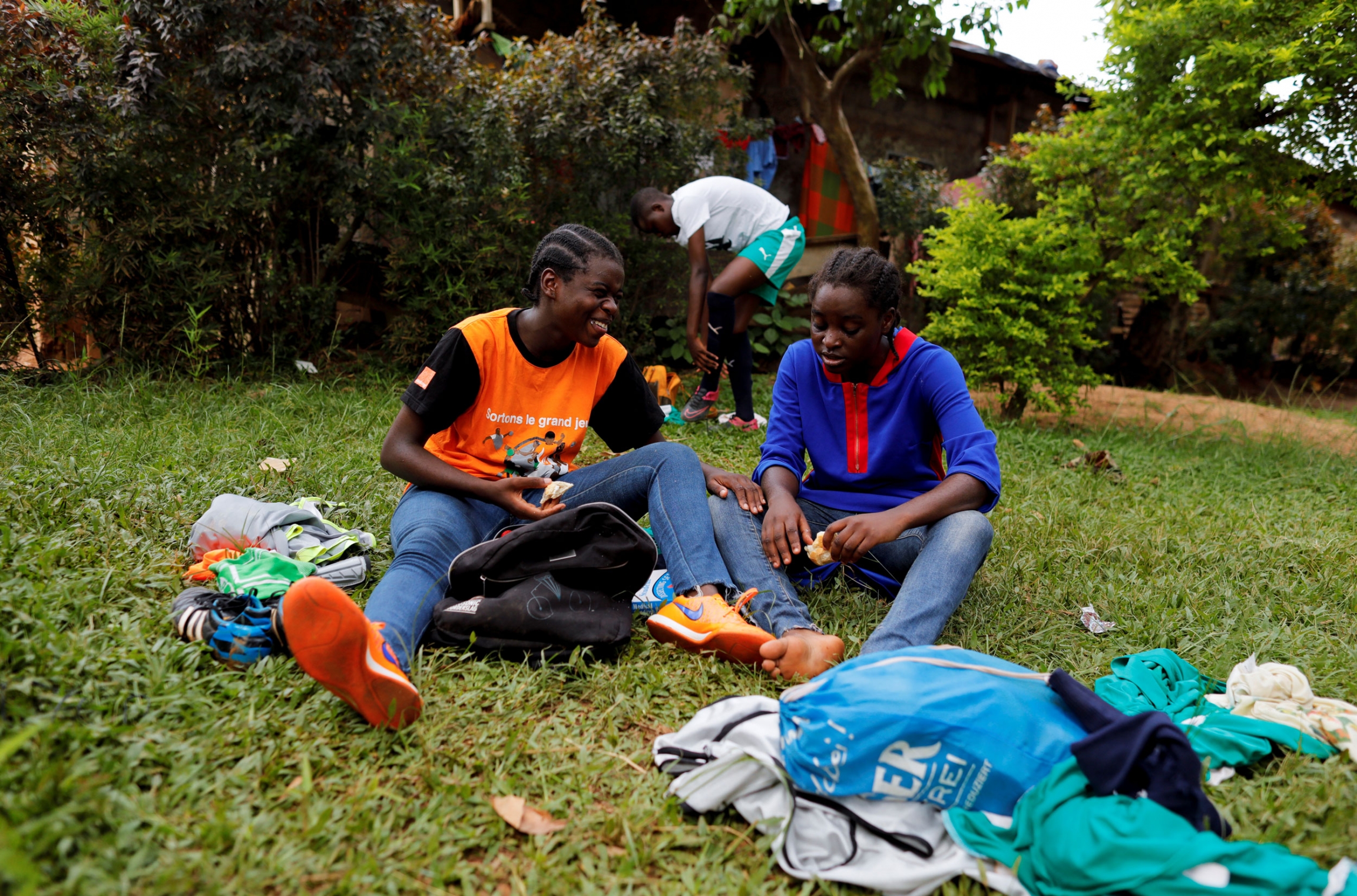 Asheri and Pouadjeu sit on the grass as they speak after their friendly match with male U15 team.

Asheri, 17, and her teammate Ida Pouadjeu, 16, are now among the first wave of girls being trained by professional coaches at the Rails Foot Academy (RFA) in Yaounde. It was set up in January to foster female soccer talent in a country where many still see the sport as a man's game. 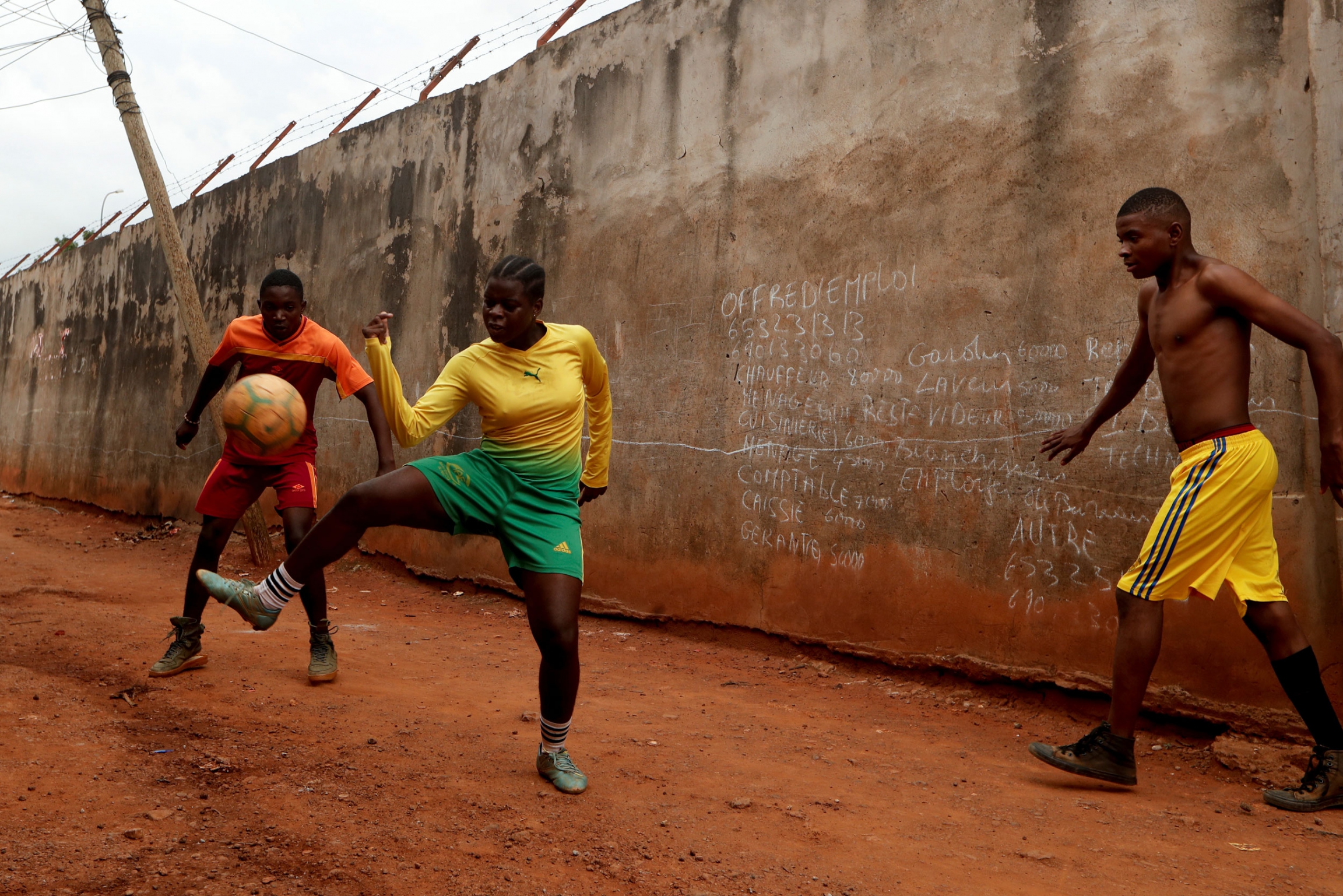 Asheri plays soccer with her friends outside her house.

"I used to train with boys, so with boys there were some exercises I was not allowed to do because I am a girl," Asheri said, describing how she was seen as more fragile than her male counterparts.

"But reaching here it was just another world, I was forced to do abdominal exercises, forced to do all harsh work so you reach a level where tears usually come out with sweat." 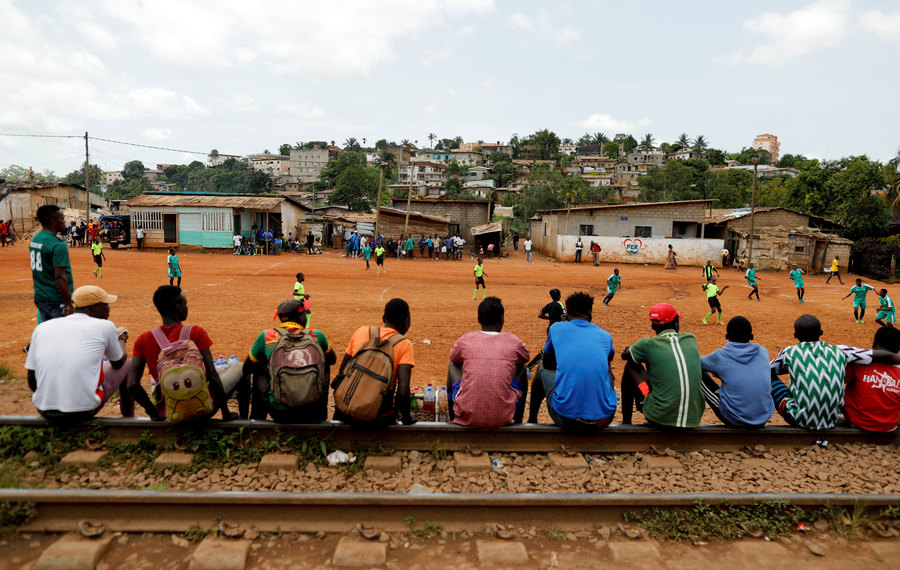 People watch a friendly match between boy's team U15, and girls' team U17.

The academy gets its name from the train tracks that hem the playing ground and turn into informal stands for the local spectators, who gather to watch the girls' teams play all-male sides.

Global interest in women's soccer is growing and FIFA hopes over a billion viewers will tune in to watch the Women's World Cup in June. Cameroon's national side, known as the Indomitable Lionesses, was one of three African teams to qualify. 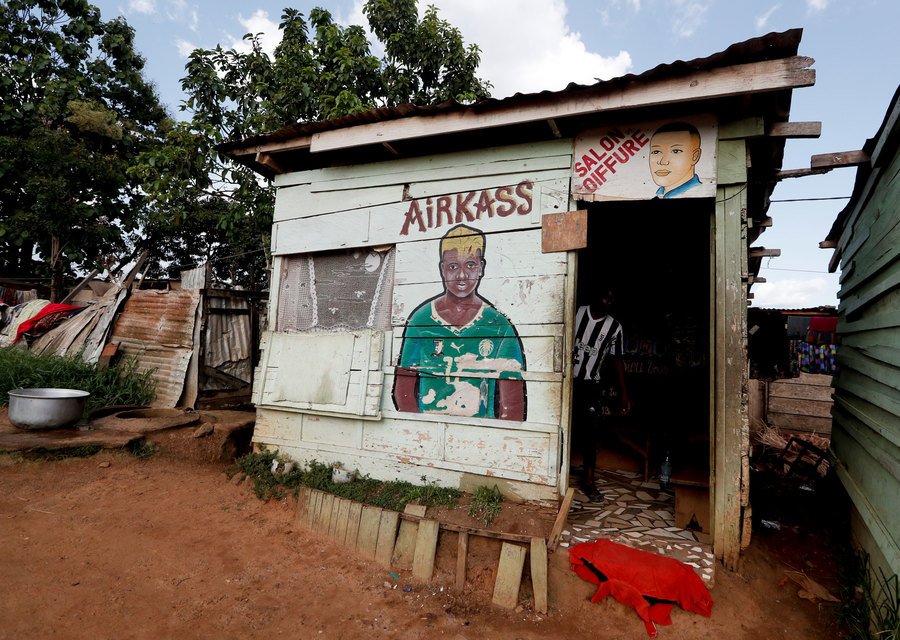 Gaelle Enganamouit is depicted on the facade of a hairdressers' shop.

Its star player, Gaelle Enganamouit, was the brains behind RFA — the West African country's first female soccer academy. Her own experience as a young player in Yaounde showed her that it was important for women to have their own space to train, she told FIFA in January. 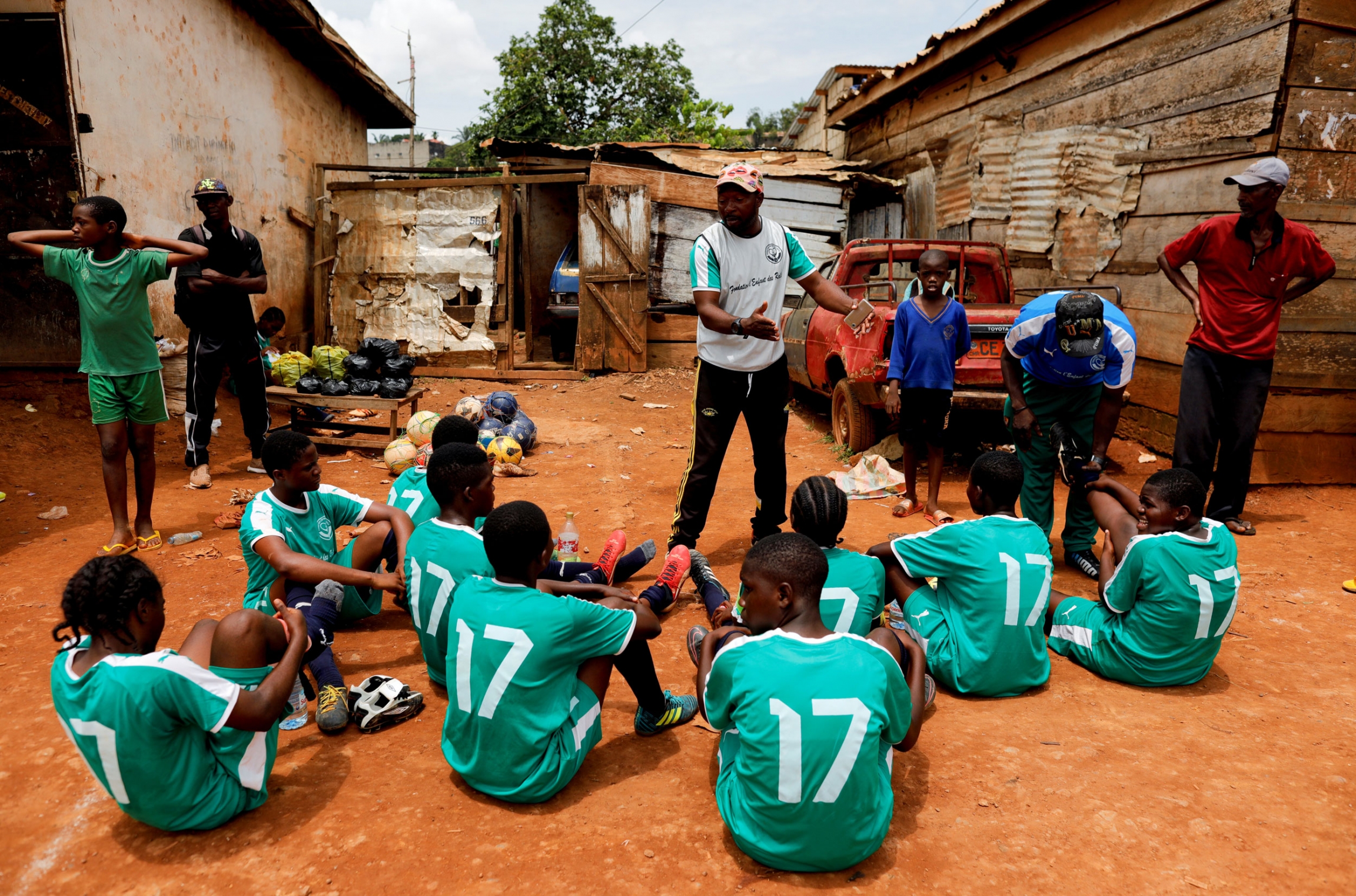 Biolo talks with his team during half-time.

The academy currently trains around 70 girls, most of whom come from poor backgrounds and would otherwise not be able to afford even their own soccer boots, said coach Emmanuel Biolo.

"Here they have everything: coaches, jerseys, training equipment, a physiotherapist, and the guidance we give them all the time. Gaelle Enganamouit really wants these kids to be the next generation," he said. 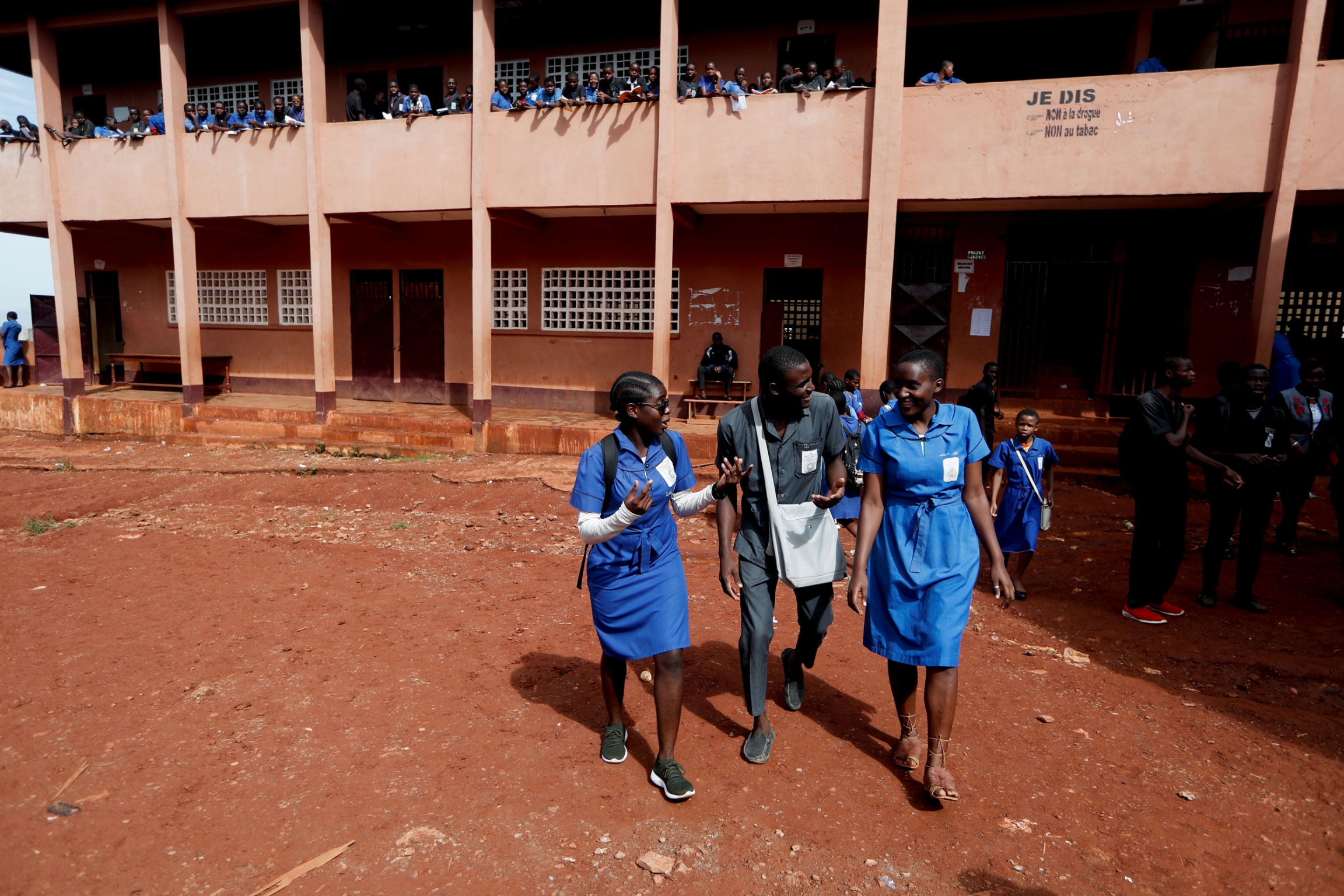 Asheri walks with her classmates.

Asheri attends the academy on Saturday mornings and after school on Wednesdays, changing out of her uniform — a belted blue knee-length dress — into her team's matching kit.

She is studying for her final baccalaureate exams, but the dream for her and Pouadjeu is to play soccer at a professional level like their benefactor. 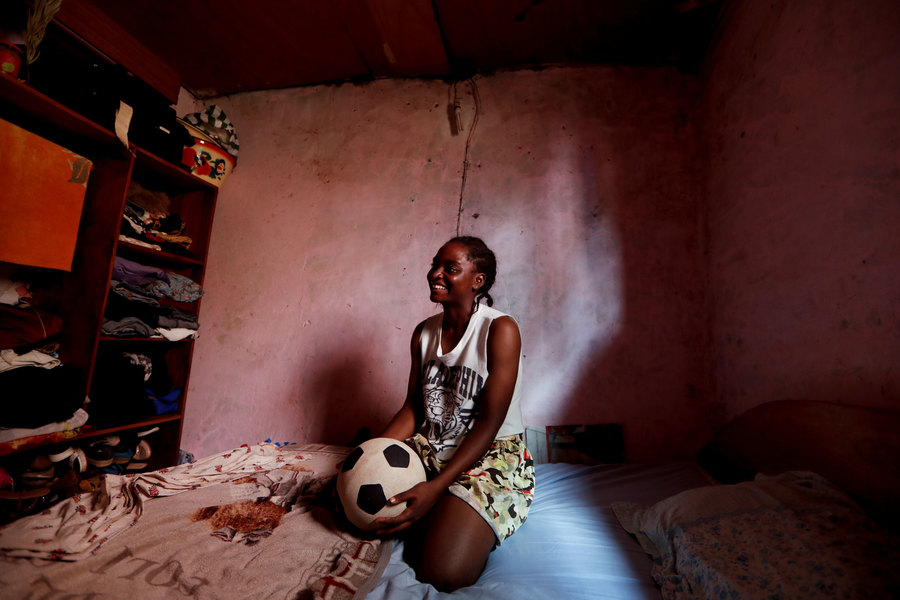 Pouadjeu sits on her bed.

"I've seen Gaelle (Enganamouit) play on TV. I've never missed one of her matches. She plays so well, I want to be like her," Pouadjeu said.

Both girls initially faced opposition from family members who were worried that the sport was unfeminine. But neither have been deterred by such prejudice. 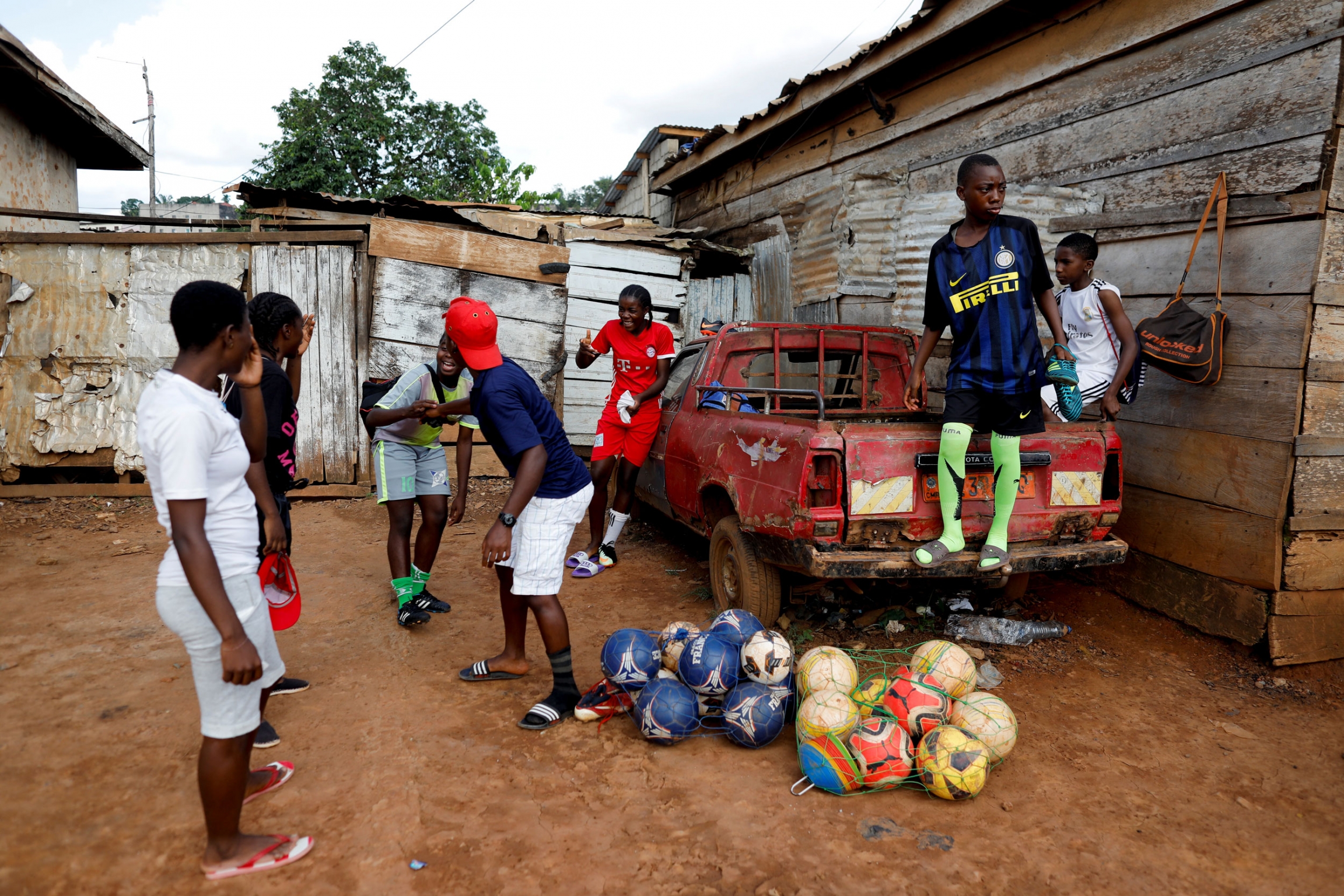 Asheri jokes with her teammates before their training session. 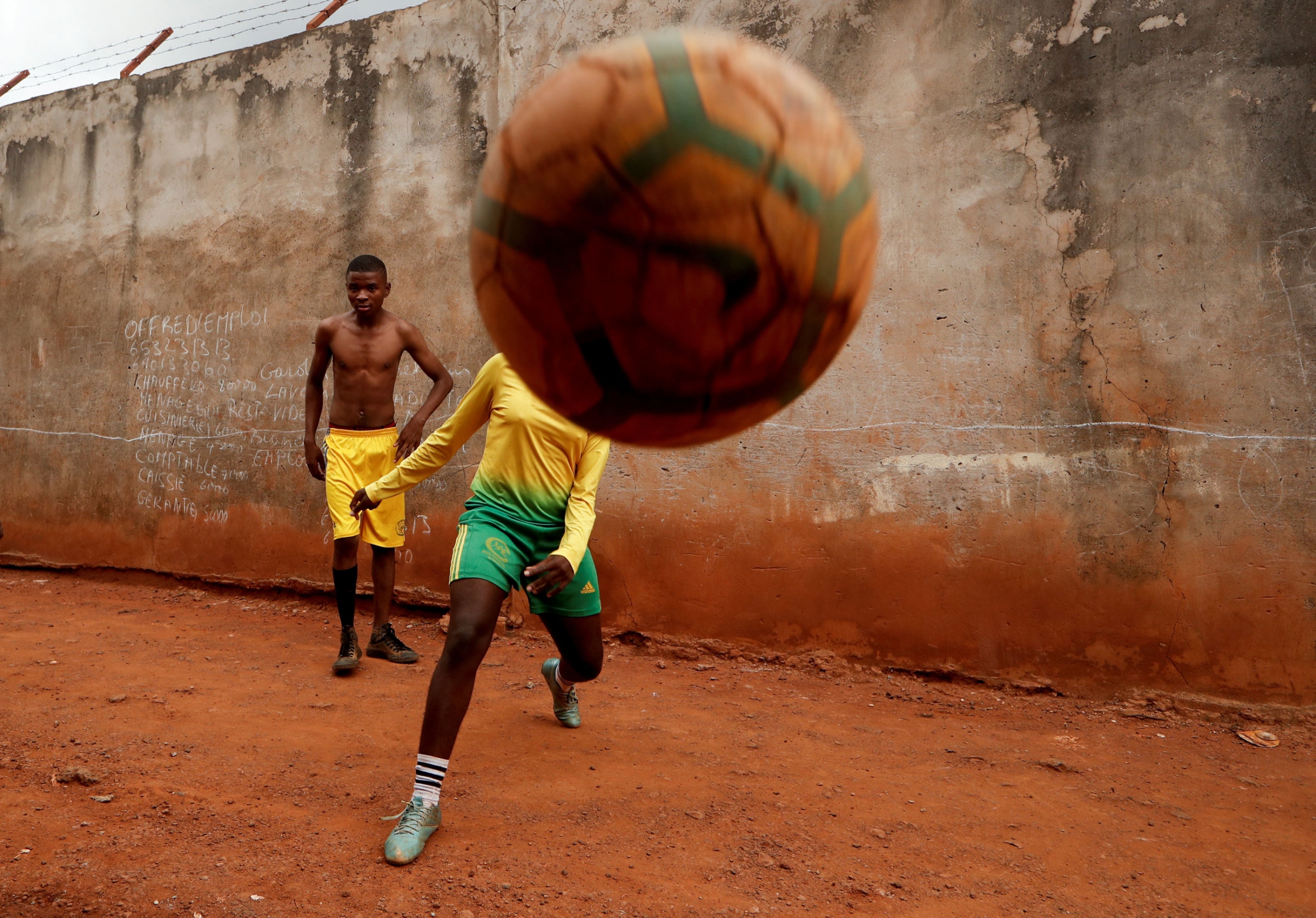 Asheri plays soccer with her friends outside her house.

"I picked up the ball, I kicked it and I never looked back," Asheri said, recalling the childhood street soccer games with her male cousins and neighbors. 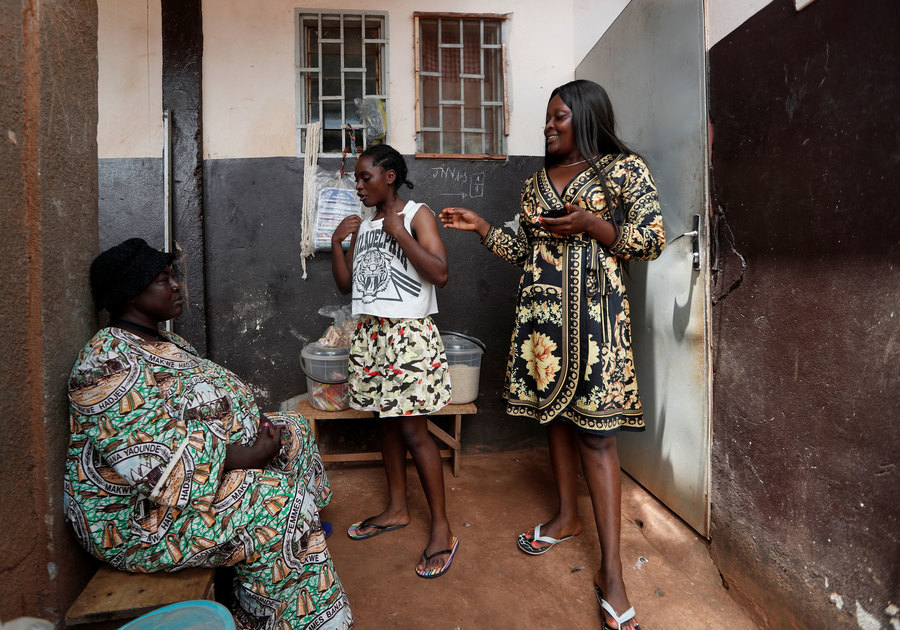 Pouadjeu and her aunt Rosalie Tchamkou and her sister Kevine at their house.