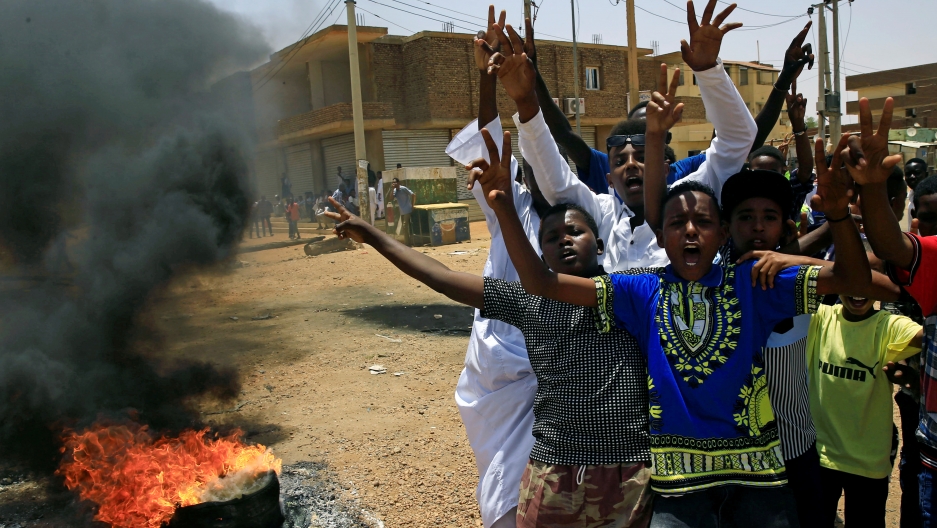 People in Khartoum, Sudan, have endured a week of fear and trauma and observers see more tension brewing.

Paramilitary soldiers from the Rapid Support Forces continue to patrol city streets after killing more than 100 Sudanese who had been protesting outside military headquarters on Monday. Unlike the regular Sudanese army, the RSF has a reputation for cruelty, honed through decades of fighting in the western Sudanese province, Darfur. There, they fight under a different name: the Janjaweed.

One of the early Janjaweed leaders, Mohamed Hamdan Dagalo — better known as Hemeti — was chosen by Sudanese dictator Omar al-Bashir to organize the RSF in 2013.

"They were much better armed than the Janjaweed had been, much better supplied, and notably, they were formally recognized by the regime in Khartoum," says Sudan researcher and scholar Eric Reeves. "And Hemeti, although nominally part of the Sudan Armed Forces, was not in the military chain of command. So he, in effect, is in charge of an independent army — an army that is now running rampage in Khartoum."

Reeves spoke with The World's Carol Hills about Hemeti, the RSF, and what he sees as a growing schism inside Sudan's military.

Carol Hills: What role did the Rapid Support Forces, under Hemeti's leadership, have in this crackdown that's been going on since Monday in Sudan?

Eric Reeves: The Rapid Support Forces have been right at the center. Indeed, they've been the predominant force. They've even dressed some of their militiamen in police uniforms to make it seem as though many of the security services are involved. But it really is the Rapid Support Forces and the brutality and the gratuitous humiliation and disgusting behavior of these militiamen. It's as though the ghastly violence of Darfur had been transported to the streets of Khartoum. Not just of killings, but of rapes, of deliberate humiliation of men before their children and wives, all sorts of things that were common in Darfur but were largely overlooked in Khartoum. Now they can't be overlooked. Darfur has come to Khartoum. And the consequences of the international community averting its eyes for the last 10 years from what's going on in Darfur — that's come home to roost in a very serious way.

Well, they certainly are doing whatever they want. There have been many in the regular forces — the Sudan Armed Forces — who've been appalled by the Rapid Support Forces for a long time. They regard them, rightly, as untrained, undisciplined militiamen with no regard for human life, no regard for human decency. The Sudan Armed Forces have, of course, been implicated in some of the terrible violence throughout Darfur over the last 30 years, most acutely since the genocide began in 2003. But they are very different forces. The Sudan Armed Forces are trained; there is discipline, there's an officer hierarchy. And what I hear continually, from sources in Khartoum and elsewhere, is that there's tremendous dissatisfaction, especially in the middle ranks, junior ranks: the majors, the colonels, the lieutenants. These would be the elements of the Sudan Armed Forces who would stand up to the Rapid Support Forces and they would have superior firepower.

Now, we're starting to hear whispers of a possible civil war. Who would the sides be and who would support them?

Well, the civil war would indeed be between the Rapid Support Forces and those elements of the Sudan Armed Forces who are determined that Sudan will not be controlled by rabid militiamen.

"Well, one thing I can assure you is that if there is civil war in Sudan, there will be a flood of Sudanese migrants to the European continent."

The African Union has suspended Sudan's membership. What other regional powers doing and what is the US doing?

The US is not doing nearly enough, in part because it's constrained by President Trump's support for Saudi Arabia and the United Arab Emirates. These are Islamic dictatorships and have no interest in having in Sudan a democratically-led government that has a respect for human rights, civil rights and a free press. But the international community, and especially the European Union, has a great deal at stake here. The European Union has funded efforts, through the al-Bashir regime, to staunch the flow of African migration to the European continent. Well, one thing I can assure you is that if there is a civil war in Sudan, there will be a flood of Sudanese migrants to the European continent. It will be very bloody, very nasty, and could be quite protracted, especially in regions away from the capital.

So what is the European Union doing? What stand are they taking?

So far the European Union has been big on words of condemnation, urgings, sympathies and so on, but they've not made it clear how they want to bring pressure to bear on the Transitional Military Council. We must hope that there is still some chance that the generals — the Sudan Armed Forces generals — will see the disaster that Hemeti represents for the country and will rein him in.

Who benefits from an unstable Sudan?

Nobody. Sudan borders a lot of countries that have internal problems of their own: Eritrea, Chad, Libya, for example, South Sudan. This is a pivotal country in northeastern Africa, and it stretches from the Mediterranean to the Equator practically. This is a region that could implode with all-out civil war, a civil war that's been made much more likely by the refusal of the international community to recognize what was represented by the uprising that began on Dec. 19 of last year. We're talking about something that's approaching half a year in duration, and the support that this extraordinarily disciplined and multicultural, multiracial, multiethnic, multi-professional, multi-geographical coalition has represented has not received the kind of support it needed.

You're talking about the official opposition?

The Sudanese Professionals Association is the spearhead and leadership. But the broader alliance is called the Alliance for Freedom and Change. That has crystallized more recently. But these two bodies have done all they can to negotiate a transition to civilian governance. And that's, after all, what the Transitional Military Council was all about: a transition to civilian governance. But two weeks ago, when it became clear that the Transitional Military Council had no interest in transition, talks broke down and violence of the sort we've seen this week became inevitable.

"We should have committed to democratic change in Sudan long ago — we, meaning those countries, those international actors with influence."

Eric, what are you hearing from the people you're in touch with in Sudan?

They are desperate, desperate that their story be heard by the world. And they say it constantly: "What we want is freedom, peace and justice." They've done everything they can to abide by what we might call the norms of a democratic non-violent push for a true civilian governance in this country. That they have not been supported more vigorously is really a shame on the world. And it's going to backfire because the absence of support has left them now facing a kind of mad dog militia force in the Rapid Support Forces; an army that seems paralyzed or at least unable to decide which way it will break; and we could have averted this. We should have committed to democratic change in Sudan long ago — we, meaning those countries, those international actors with influence.