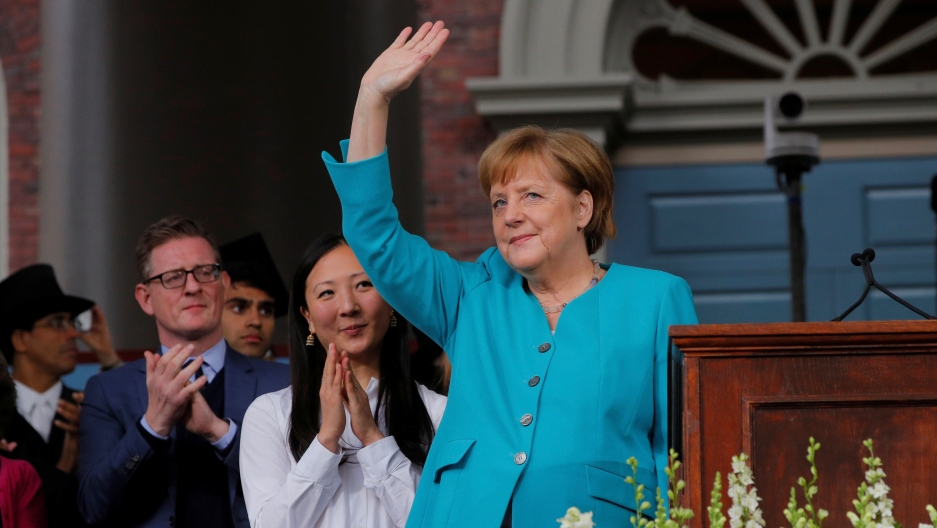 “Tear down the walls of ignorance and narrow-mindedness,” German Chancellor Angela Merkel told graduates at the 368th commencement ceremony at Harvard University in Cambridge, Massachusetts, May 30, 2019.

President Donald Trump was the 2019 commencement speaker at the US Air Force Academy in Colorado Springs, Colorado, on Thursday.

“In all things and ways, we are putting America first, and it’s about time,” Trump told the graduating class of just under 1,000 cadets. “And we are restoring the fundamental principle that our first obligation and highest loyalty is to the American citizen. No longer will we sacrifice America’s interests to any foreign power. We don’t do that anymore.”

Across the country at Harvard University, new graduates heard a very different message on commencement day.

“Changes for the better are possible if we tackle them together. If we want to go it alone, we could not achieve much. More than ever, our way of thinking and our actions have to be multilateral rather than unilateral.”

“Changes for the better are possible if we tackle them together,” Germany’s Angela Merkel told the graduating seniors in Cambridge, Massachusetts. “If we want to go it alone, we could not achieve much. More than ever, our way of thinking and our actions have to be multilateral rather than unilateral.”

Merkel never mentioned Trump by name, but she didn’t have to. She talked about the global challenge of climate change, the importance of truthfulness, and not taking liberty and democracy for granted.

In her parting remarks, Merkel switched from German to English and urged the young graduates preparing to begin their new lives to “tear down walls of ignorance and narrow-mindedness, for nothing has to stay as it is.”

That line earned Merkel a standing ovation. And it speaks to why the German leader, in the Trump era, has been referred to as “the leader of the free world.”

But does the mantle fit?

“There’s some truth to it,” said Karl Kaiser, a longtime political adviser in Germany and senior fellow at the Belfer Center for Science and International Affairs at the Kennedy School of Government at Harvard. “At the moment, the White House is not doing what presidents have done throughout the postwar period to uphold the values of human rights, of non-discrimination, of democracy.”

“America helped the Europeans overcome the heritage of chauvinism and nationalism by supporting European integration, which is probably the greatest achievement of American diplomacy in the postwar period, besides helping a former adversary like Germany to become a very prosperous democracy,” Kaiser said.

Kaiser says Germany has been lucky, after the disasters of the past, to have the right leader at the right moment.

“Angela Merkel is the person who kept the European Union together in a time of new challenges,” he said.

Merkel grew up outside of Berlin in former East Germany, the daughter of a Lutheran theologian and pastor. She studied natural sciences and went into politics, becoming a government spokeswoman in East Germany in 1990. After reunification, Merkel worked closely with her mentor, Chancellor Helmut Kohl.

“He called her, ‘mein Mädchen,’ which in this day and age of #MeToo, we would never tolerate, because the translation is, 'my little girl'," said Cathryn Clüver Ashbrook, who grew up in Germany and directs the Project on Europe and the Transatlantic Relationship at Harvard. “For someone who is now such a powerful player as Angela Merkel is, who wields power in Europe and across the world, that seems like an anachronism.”

Clüver Ashbrook says Merkel herself has never embraced the "leader of the free world" label. It was something people bestowed on the German leader for the way she dealt with the newly elected Trump.

Merkel’s approach to Trump was “to say that, ‘Yes, of course, the strong friendship with the United States would continue, would be strengthened.’ But that also, she would stress Western values, Clüver Ashbrook said. "She said, 'There is a principled part of my leadership that we will continue to honor, and if that means pushing back against this administration, we will'."

Before she became Germany’s first female chancellor in 2005, Merkel served as environment minister. And one of her boldest moves as national leaders was in 2011, after the nuclear accident in Fukushima, Japan, when she decided to transform the German economy by phasing out nuclear power.

“That will definitely be a legacy item of hers,” Clüver Ashbrook said. “We call it ‘die Energiewende,’ the radical switch in how Germany does its energy policy, which is all linked to climate change.”

It was a radical move for a politician who has always been known as savvy, but careful.

A second crucial — and also radical — move by Merkel came in 2015, when she essentially decided to open Germany’s borders to hundreds of thousands of refugees and migrants from Syria and beyond. It was something that candidate Trump criticized her for on the campaign trail. But Clüver Ashbrook says Merkel was acting on the Christian ethos she grew up with.

“She didn’t run [the decision] through the party machinery. She decided this on the basis of a moral responsibility."

“She didn’t run [the decision] through the party machinery. She decided this on the basis of a moral responsibility,” Clüver Ashbrook said.

Much of the German republic responded by backing Merkel’s decision. And now, several years later, many of the migrants have begun successful, new lives in Germany, integrating in mainstream society.

The politics of that decision are complicated, though.

“The perception is that these refugees are going to create future challenges for Germany, namely that they will be taking away jobs that are reserved for Germans,” said Julianne Smith, a Berlin-based expert with the Center for a New American Security.

Justified or not, Merkel’s response to the migrant crisis has also been something of a political gift to the anti-immigrant far right, not just in Germany, but elsewhere in Europe.

Another big part of Merkel’s legacy is her endurance, says Daniel Drezner of the Fletcher School of Law and Diplomacy at Tufts University.

“Whatever you think, and there’s a lot to criticize in terms of Merkel’s legacy, Germany as a whole did relatively well despite the most serious financial crisis in a hundred years."

“Whatever you think, and there’s a lot to criticize in terms of Merkel’s legacy, Germany as a whole did relatively well despite the most serious financial crisis in a hundred years,” Drezner said.

But the 2008 financial crisis hurt other parts of Europe a lot more, and Drezner says Merkel deserves much of the blame.

“Merkel was a towering figure who could sit down with Putin; she could sit down with the American president, and she was treated as an equal,” Drezner said. “But in some ways, Merkel’s greatest legacy was her insistence, about a year after the financial crisis, of the need for austerity ... as a way to arrest the crises in Greece and in other southern European countries. And that proved to be an unmitigated disaster.”

“There is no way you can look at the politics of austerity and conclude that it succeeded in any way,” Drezner said. “It made the crisis in the Eurozone far, far worse.”

For all the talk about immigration being a catalyst for the rise of the populist right in Europe, Drezner says the pain caused by fiscal austerity played an important role, as well.

Nonetheless, Merkel deserves high praise as someone who believed in Western democratic values. As someone who grew up in a communist system, she consistently defended liberal democracy as something not to be taken for granted.

“She had a moral core that you cannot deny,” Drezner said.

The next leader of the free world

So, who is there to take over for Merkel as the next leader of the free world after she steps off the global stage sometime before 2021?

A leader who has won worldwide recognition as a moral figure is Jacinda Ardern, the prime minister of New Zealand, especially in the way she responded to the terrorist attack on a mosque in Christchurch in March of this year.

It’s tough to see global leadership coming from New Zealand, though, a small country that is so far away from Europe and North America.

Another name that comes up is Emmanuel Macron. The French president quickly earned a reputation as someone who could work with Trump effectively, but that reputation also faded quickly.

But while Macron has tried to articulate a vision for a united, peaceful and prosperous European Union, he is very unpopular at home and lacks the kind of mandate that Merkel has maintained for almost a decade and a half.

Merkel’s apparent political successor back in Germany is Annegret Kramp-Karrenbauer, whose nickname is AKK. But AKK has struggled in the polls, made some public gaffs and raised questions about whether she will ever achieve the level of success that Merkel has achieved.

Even if someone of Merkel’s ability and drive were waiting in the wings to take over for her as the next leader of Europe and the West, the current political conditions would make it difficult. That’s because parties from the political center in Europe are struggling. In Germany and other parts of Europe, it’s parties on the far left and the far right that seem to be gaining strength.