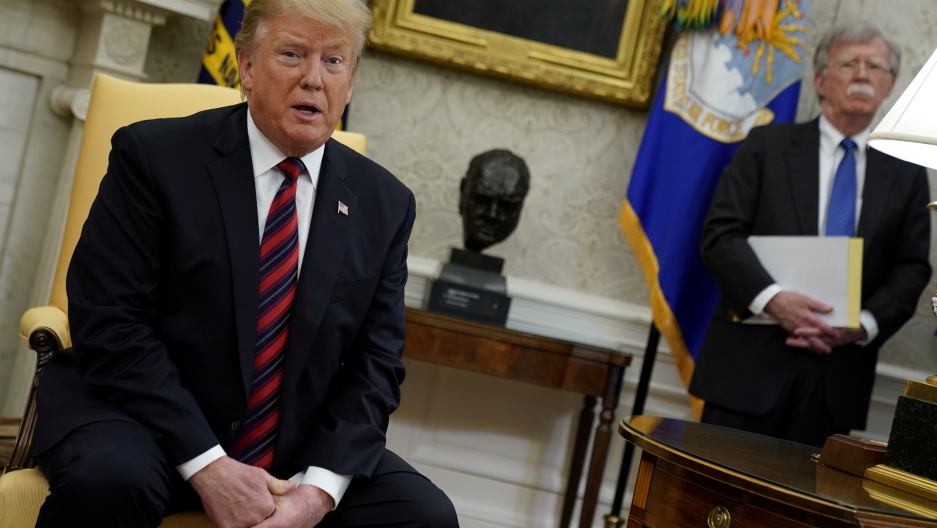 US President Donald Trump speaks to reporters with National Security Adviser John Bolton looking on in the Oval Office at the White House in Washington, DC, May 3, 2019.

President Donald Trump says he does not want war with Iran. But his administration is still sounding the alarm.

"This threat from Iran remains," Secretary of State Mike Pompeo told CNBC on Thursday. "We've had some luck in disrupting some of the tactical things that were in front of us, I think it's fair to say. But make sure we're still on high alert."

Also on Thursday, Acting Defense Secretary Patrick Shanahan confirmed that the Pentagon is considering a plan to send thousands of additional US troops to the Middle East. This, all amid a debate on Capitol Hill over whether the administration is overstating any potential threat from Iran. Some Democrats think it is. But the Republican chairman of the Senate Foreign Relations Committee, Idaho's James Risch, doesn't agree with them.

"The Democrats are dead wrong on that," Risch said on Fox News. "And anyone who would say that the Iranians were not turning up the temperature in the last two weeks of April and the first week of May simply doesn't know anything about intelligence. There were multiple streams and a number of events that occurred that caused the administration, the intelligence community, the defense community, the State Department — and all of us that work in this — to be very, very concerned."

Connecticut Sen. Chris Murphy, one of the Democrats on the Senate Foreign Relations Committee, says that while Iran is acting belligerently, the US response is not helping.

"We're doing nothing to calm the situation down. All we're doing is escalation, and it's blind escalation with no endgame," he told The World's Marco Werman.

Murphy: The president was told by his military advisers that if he pulled out of the Iran nuclear agreement and he named the Iranian Revolutionary Guard as a terrorist organization, there would be increased threats on US personnel in the region. It doesn't justify what Iran has done in response, but it's all very predictable. And without an ability to talk to the Iranians, without a diplomatic channel, you risk a mistake being made.

Marco Werman: We heard a British commander recently say that there was nothing really abnormal about what Iran was doing. But you were at a briefing that Secretary of State Pompeo and Defense Secretary Shanahan gave to senators on Iran. Did they provide any further evidence that Iran is posing this heightened threat right now?

My understanding is that the British have walked part of that back. I do think there's an elevated risk. Again, I just think that that elevated risk comes as a response to US actions. And it was avoidable, had we not pulled out of the nuclear agreement and taken this step to name the Iranian military as a terrorist organization.

The US has deepened ties with Saudi Arabia in recent years, Iran's archenemy. How do you think the US relationship with Saudi impacts what's going on right now with Iran?

"... supporting the Saudis at the level that we are today is part of what drives the Iranian behavior in the region ..."

We spent a lot of time rightfully talking about the threat that Iran poses to Israel. And there's no doubt that that regime still states that their mission is to wipe Israel off the face of the earth. That being said, Iranian missiles are primarily pointed at Saudi Arabia today. It is the Saudis that the Iranians are involved in an ongoing set of proxy wars with. And so every time that we sell more weapons to the Saudis, every time that we double down on our commitment to the Saudi side of that regional war for supremacy between the Saudis and the Iranians, the Iranians decide to double down in their commitment to building up their ballistic missile program, to supporting terrorist groups and proxy forces in the region that are fighting Sunni backed forces. And it's just been amazing to me that, you know, frankly both Democrat and Republican presidents haven't figured that out: that supporting the Saudis at the level that we are today is part of what drives the Iranian behavior in the region and part of the reason why many of us are arguing for a changed relationship with Saudi Arabia as part of a strategy to de-escalate tensions with Iran.

REALLY IMPORTANT THREAD: 1/ I am hearing that Trump may use an obscure loophole in the Arms Control Act and notice a major new sale of bombs to Saudi Arabia (the ones they drop in Yemen) in a way that will prevent Congress from objecting. Could happen this week.

Last night you tweeted that the president is considering using an obscure loophole in arms control law that would allow his administration to sell a new batch of bombs to Saudi Arabia without congressional approval. It has not happened yet. So why tweet about it now?

Well, to raise the alarm bells to try to make sure that it doesn't happen. I don't know whether it would be completely unprecedented. But the idea that the president would use an emergency in the Middle East as a means to circumvent Congressional oversight of an arms sale is a very dangerous precedent. Frankly there's always an emergency in the Middle East. And so if you could simply cite ongoing tensions or hostilities as a reason not to come to Congress to approve an arms sale, no president will ever come to Congress ever again. And that's very, very dangerous.

Senator, the work of your committee and of US diplomats in the Middle East — do you think what you're all doing is held back by the fact that Washington is kind of overwhelmed by this feud between the White House and the House of Representatives?

"We shouldn't just complain about what the president does. We actually still can pass legislation ..."

It shouldn't be. I mean, I think that the fact that the president is, you know, claiming that he won't work with Congress at all until every investigation into his administration stops is ridiculous. At the same time Congress has kind of put itself in this position of having difficulty weighing in on foreign policy. Congress took itself out of the business of declaring war years ago. Once it got really messy to figure out who we were fighting and when the conflict ended, Congress decided that we'd just outsource decisions about military intervention to the president. And President Obama took that and ran with it. And President Trump is doing the same thing. So if we want to be more impactful on matters of foreign policy, it's within our power to step up and do something about it. Take away the president's power to unilaterally decide tariff policy; authorize military action against ISIS and other enemies in a way that, you know, create some definition of what the president can and cannot do. We shouldn't just complain about what the president does. We actually still can pass legislation with a veto proof majority if we have enough members. We should try to do that.