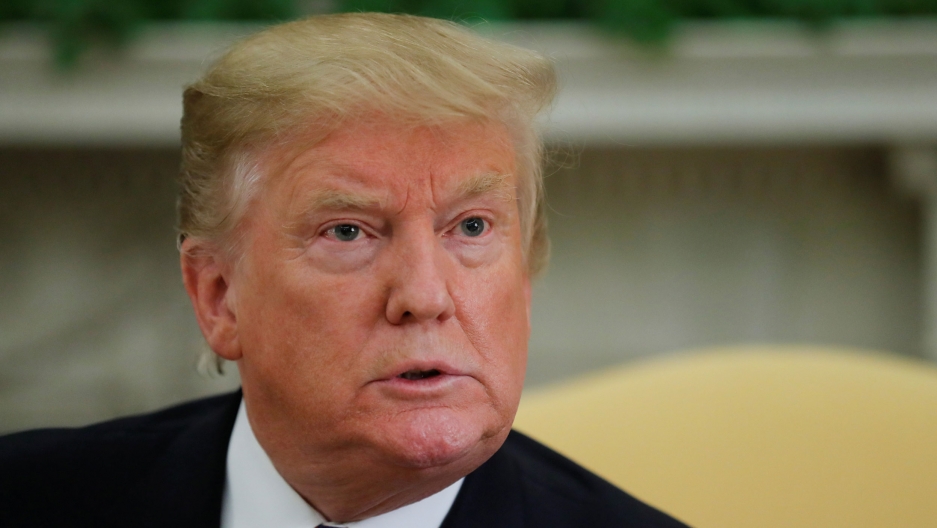 US President Donald Trump listens to questions during a recent meeting in the Oval Office at the White House in Washington, DC.

US President Donald Trump has asked for files to be prepared on pardoning several US military members accused of or convicted of war crimes, including one slated to stand trial on charges of shooting unarmed civilians while in Iraq.

Trump requested the immediate preparation of paperwork needed, indicating he is considering pardons for the men around Memorial Day on May 27, the New York Times reported on Saturday, citing two unnamed US officials. Assembling pardon files normally takes months, but the Justice Department has pressed for the work to be completed before that holiday weekend, one of the officials said.

One request is for Special Operations Chief Edward Gallagher of the Navy SEALs, scheduled to stand trial in coming weeks on charges of shooting unarmed civilians and killing an enemy captive with a knife while deployed in Iraq.

Also believed to be included is the case of Major Mathew Golsteyn, an Army Green Beret accused of killing an unarmed Afghan in 2010, the Times said.

The Times also reported that the cases of other men are believed to be included in the paperwork, without naming them.

In December, Trump pardoned Army First Lt. Michael Behenna, who had been court-martialed and convicted of unpremeditated murder for killing a detained Iraqi man whom he was interrogating.

The Department of Justice declined to comment on the report, while the White House did not immediately respond to a request for comment.

Legal experts cited in the report said that pardoning several accused and convicted war criminals, including some who have not yet gone to trial, has not been done in recent history, and some worried such pardons could erode the legitimacy of military law.

The World asked our community of veterans we message periodically through SMS to weigh in on the pardons. We received hundreds of responses.

Many veterans voiced outrage, like Peter Rim in Washington, DC, who called the possible pardons an awful idea.

“This is an awful idea,” Rim wrote. “One more step in politicization [of] the military. About as bad an idea as bringing back enhanced interrogations. Sullies the proud.”

Lili Folder in Connecticut agreed, saying it is an appalling idea and that war crimes should be in the same category as crimes against humanity.

“[G]uilty individuals should be held fully accountable,” Lili wrote. “This is contrary to the code of honor embraced by military law and guidelines. As a veteran, I would feel deeply ashamed of the military organization if such crimes were excused on the whim of someone who doesn't understand what it means to serve. This is not what we pledge when we take the oath to defend the constitution against all enemies, domestic and foreign. This is abuse of power.”

"As a veteran, I would feel deeply ashamed of the military organization if such crimes were excused on the whim of someone who doesn't understand what it means to serve."

Not everyone responded with contempt to the idea of a pardon for the likes of Special Operations Chief Edward Gallagher and others.

Joseph Dougherty, who wrote to The World from Calais, Maine, suggested pardons would be appropriate and that the rules of modern warfare have changed.

“The forces of evil that we are combating do not abide by any Geneva conventions or other traditional rules of warfare and it makes fighting them exceptionally difficult. They use human shields and hide in the civilian population, so abnormal methods are sometimes necessary to roust them out and eliminate them or gather the necessary intelligence to disrupt their activities. The face of modern warfare has changed substantially, and the techniques used to fight it must change as well.”

Give ‘chance to regain dignity’

Another theme that emerged from the veterans that responded were concerns about mental health and the trauma associated with warfare. Brad Gilbert from Lewiston, Idaho, suggested that when you’re in a warzone a soldier’s mental health may be compromised.

“I, for one, am a loving individual but when at war, I could be a stone-cold killer,” Gilbert wrote. "Rehabilitation should be the focus, not incarceration, just letting them free should not be an option. Give the soldier a chance to regain their dignity. At the same time, the family of war crime victims should be offered mental health services as well as whatever is culturally appropriate, i.e. death benefits.”

Appealing to Trump's base

As with much of our current political climate, many vets called news of Trump’s potential plans for pardons — just politics with the president playing to his base of supporters.

"Having served in combat, life and death decisions require instant decisions, clouded by emotion, fear and chaos,” wrote Stephen Greene, of San Geronimo, California. “If President Trump were pardoning these soldiers out of some real sense of empathy and understanding, it might be correct. I fear he is pandering to xenophobia, racism and ultra-nationalism to appeal to his base."

"Having served in combat, life and death decisions require instant decisions, clouded by emotion, fear and chaos. If President Trump were pardoning these soldiers out of some real sense of empathy and understanding, it might be correct. I fear he is pandering to xenophobia, racism and ultra-nationalism to appeal to his base."

View of war crimes has been ‘too broad’

The question about whether Trump should pardon these soldiers or not struck some of the veterans who responded as a little too broad of a stroke. War is messy, many wrote, so each of these individuals should be judged on a case-by-case basis.

"I say review the crimes and apply reasonable standards,” wrote Scott Walker, of Asheboro, North Carolina. “The previous administration was too strict and had too broad a view of war crimes. We send men into harm's way and they need to have latitude and tools to get the job done. Compare[d] to policemen and women who are exonerated for what seems to be police brutality, in reality, is a man or woman trying to survive a shift on the beat. Our troops should get the same or more latitude."

Editor's note: Thank you to all the veterans who responded to our question.