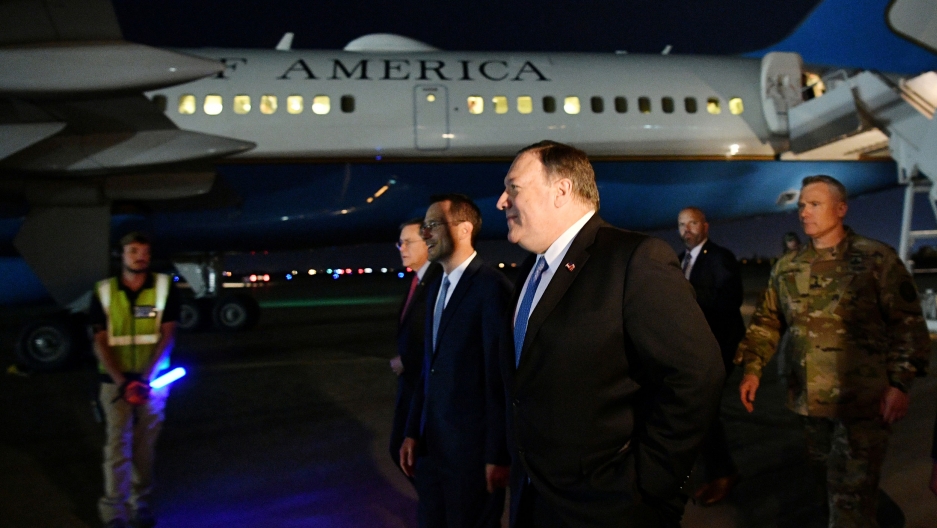 US Secretary of State Mike Pompeo walks with Acting Assistant Secretary for Near Eastern Affairs at the State Department David Satterfield (Left), and Charge D'affaires at the US Embassy in Baghdad Joey Hood (2nd Left) and Lt. General Paul LaCamera upon arrival in Baghdad, Iraq, May 7, 2019.

In a move that follows new sanctions pressure on Iran, Washington ordered the departure of non-emergency American employees from its diplomatic missions in Iraq on Wednesday over alleged concerns about threats from Iran.

President Donald Trump's administration is applying new sanctions pressure on Tehran and sending additional forces to the Middle East to counter what it says is a heightened threat from Iran to US soldiers and interests in the region.

Iran calls that "psychological warfare," and a British commander cast doubt on US military concerns about threats to its roughly 5,000 soldiers in Iraq, who have been helping local security forces fight ISIS militants.

The US State Department said employees at both the US embassy in Baghdad and its consulate in Erbil, capital of semi-autonomous Kurdistan region, were being pulled out immediately due to safety concerns.

It was unclear how many personnel were affected, and there was no word on any specific threat. Visa services were suspended at the heavily-fortified US missions.

"Ensuring the safety of US government personnel and citizens is our highest priority ... and we want to reduce the risk of harm," a State Department spokesman said.

Both the United States and Iran have said they do not want war, and Iraqi Prime Minister Adel Abdul Mahdi said on Tuesday he had indications "things will end well" despite the rhetoric.

Iraq has said it will keep strong ties with Iran, but also with the United States and regional neighbors, some of whom, like Saudi Arabia, consider Tehran an arch-rival.

"I think we are now in a quite dangerous situation where a miscalculation by either side could lead us into conflict," US Senator Chris Coons, a Democrat on the Senate Foreign Relations Committee, told CNN in an interview on Wednesday.

"When you project force into a very volatile region and you've got real tension between Iran and the Saudis — we have to be careful. We need a strategy," Coons said, echoing a call by Congress for the government to brief lawmakers.

The State Department reissued travel advisory for Iraq saying US citizens were at high risk of violence and kidnapping. "Anti-US sectarian militias may also threaten US citizens and Western companies throughout Iraq," it said.

A senior Iranian official said on Wednesday that any conflict in the region will have "unimaginable consequences."

By John Davison and Raya Jalabi/Reuters