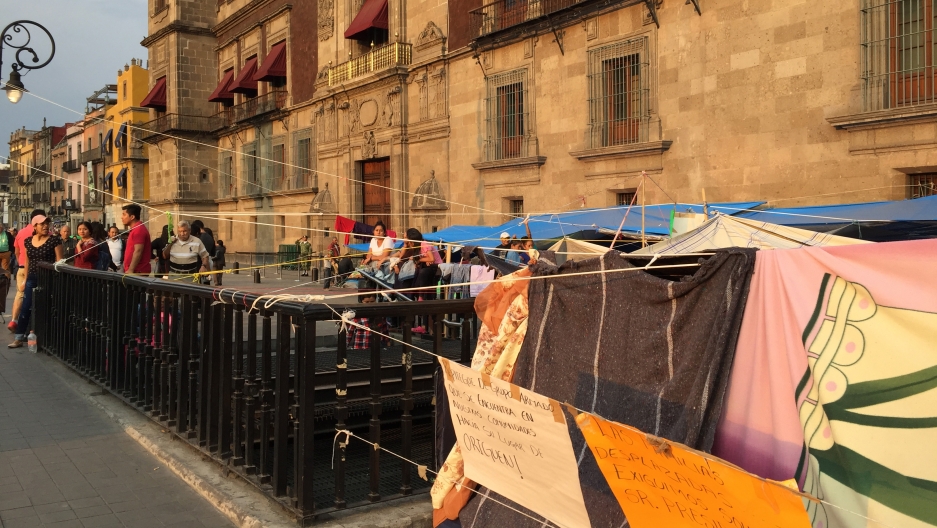 Displaced residents of Guerrero State camp in front of the National Palace in Mexico City on March 13, 2019.

Last month, the 350 desplazados, or displaced people, who slept in front of Mexico’s National Palace finally got an answer from the government about their plight — but it wasn’t quite what they were hoping for.

Since November 2018, the group has been displaced by deadly violence from armed criminal gangs associated with opium poppy cultivation in the southwestern Guerrero State. Some fled Leonardo Bravo county in the La Sierra region and others fled from the town of Tlaltempanapa in the La Montaña region.

“We decided to come to Mexico City to request a meeting with the president."

“We decided to come to Mexico City to request a meeting with the president,” said Marisela Cástulo Guzmán, who is from the La Sierra region. Guzmán said that she has waited nearly four months for the government to take action on her region’s housing and security needs.

The displaced —  including 80 children — occupied the space outside Mexico’s federal seat of power for 39 days, from Feb. 17 to March 28, hoping for a meeting with Mexican President Andrés Manuel López Obrador (known by his initials AMLO).

They never got their meeting, but on March 27, an agreement was finally reached: The Mexican government said it will coordinate security for displaced families by posting state and federal security forces in parts of the region where armed groups have infiltrated.

The group has been asked to return to the city of Chichihualco, where the government will provide food and health services as well as money for rent and utilities once residents’ hometowns have been secured.

In November 2018, some families had fled to Chichihualco and took shelter in the old auditorium. Other families camped out inside a covered basketball court in the town of Copalillo. 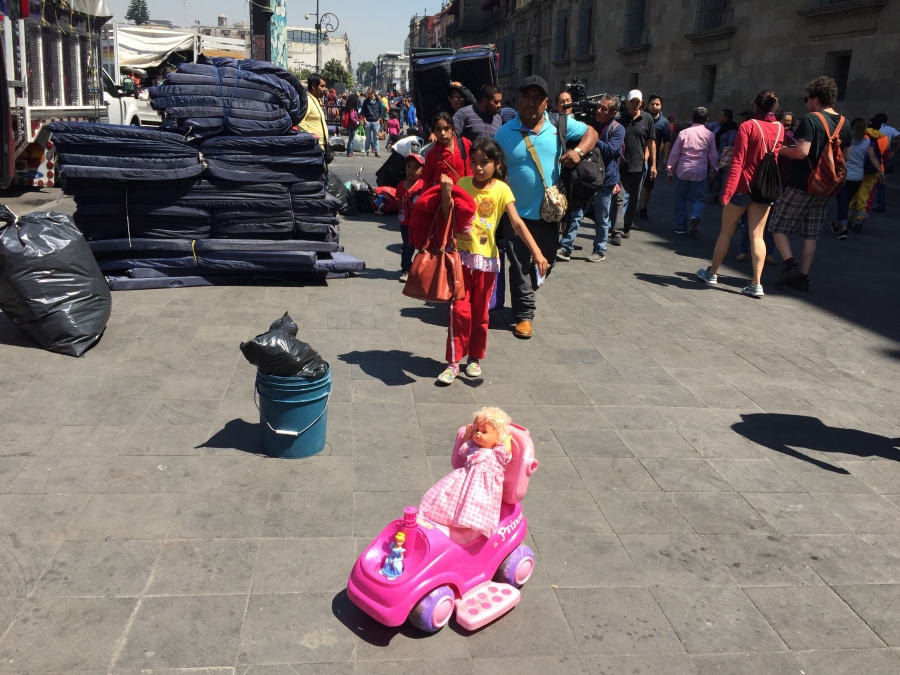 After leaving a 39-day encampment in front of Mexico's National Palace, children and their parents file onto one of the buses to return to Guerrero on March 28, 2019.

The group packed up and headed back to Guerrero State, but their journey — and the fear of continued violence in Guerrero State — is far from over.

Agreement is a ‘first step’

The agreement is “the first step,” said Neftalí Granados, a spokesperson for the undersecretary of human rights, migration and population.

A government working group has been established to monitor the living conditions of the displaced and to design a strategy for returning them to their hometowns.

Granados emphasized that the AMLO administration has inherited the problem of violence and forced displacement from previous governments, “since the terrible declaration of the war on drug traffic” by President Felipe Calderón in 2006.

President López Obrador had promised to restore safety to Guerrero before taking office on Dec. 1, including the deployment of resources to remove the armed groups and guarantee a peaceful return to homes or another safe relocation.

Alejandro Encinas, the undersecretary for human rights, population and migration, promised again in early March that his department was working on a plan to ensure a safe return to La Sierra and La Montaña.

But in AMLO’s first 100 days in office, not much had changed for the displaced, so the group trekked to Mexico City and camped out in the Zócalo to demand answers to the chronic displacement and deadly violence that has plagued their region for over a decade.

The Mexican state lacks institutional and legislative tools to respond adequately to forced displacement, Granados said. Bringing security to conflicted regions is going to be “a long and complex process.”

At the same time, Granados said his department expected the displaced to remain in Chichihualco, receive humanitarian and legal support and have their health and education needs assessed for at least a month before returning to their homes.

Victor González Benitez, 60, said he was feeling “very happy, very content, totally positive” about the future, speaking from an auditorium in Chichihualco where many displaced will receive temporary shelter. 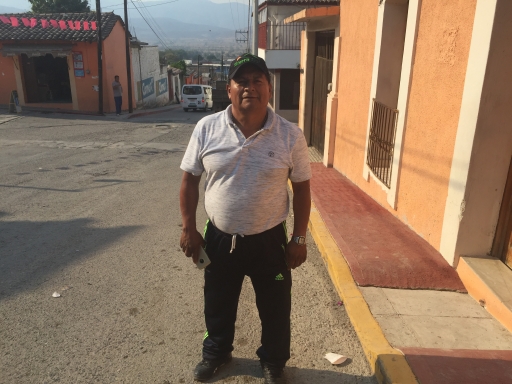 Benitez is looking forward to returning to his hometown in La Sierra, where he farms peaches and corn.

He said he expects to be waiting in Chichihualco for some months, and “does not mind at all.”

“We are all happy [with the announcement]. ... We all voted for Andrés Manuel and he has shown us that he will help us.”

“We are all happy [with the announcement],” he said. “We all voted for Andrés Manuel and he has shown us that he will help us.”

Who are the displaced?

Most of the families in Guerrero State work as small plot farmers. Armed groups in the regions of La Sierra and La Montaña have completely disrupted their lives and show no signs of slowing down.

These groups, many of which are linked to organized drug cartels, seek to control valuable territory for growing opium poppy and marijuana, as well as control of transport routes for mined gold, silver and titanium.

Armed groups sometimes pose as “community police” but instead invade, kill, loot, intimidate and occupy towns in the region.

One woman, Nancy, had joined the Mexico City encampment in solidarity because she is also displaced. Nancy’s name has been changed because she fears for her safety.

Nancy said that two years ago, a group claiming to help her town near Leonardo Bravo establish a self-defense and community police group opened fire at a town meeting. Their real purpose was to fight for territory to process opium gum for the heroin trade.

“This group held a meeting saying they wanted to build a community organization. ... Then, when the people arrived for the meeting — they killed them.”

“This group held a meeting saying they wanted to build a community organization, Nancy said. “Then, when the people arrived for the meeting — they killed them.”

The shootout began at the meeting and spilled onto the streets, leaving seven dead. Nancy lost her son and her brother to the armed ambushers. She left the region soon after, fearing for her safety.

In other cases, the armed groups clearly identify as drug cartels. For example, Los Ardillos, or “The Squirrels,” has completely taken over the town of Tlaltempanapa in La Sierra, forcing families to flee. They pressure small farmers to grow marijuana for the illicit drug trade.

Since their arrival to Chichihualco at the end of March, federal government personnel have assessed the humanitarian needs of the displaced families. The majority of the families have found rental accommodation in the town, with financial support from the government.

This month, AMLO has also announced further plans for a National Guard, aimed at improving security across the country.

In Chichihualco, 55-year-old Roberto Medina Hurtado, also a farmer from La Sierra, said he could not see a return home for at least six months. Meanwhile, the displaced face long days without work and income, trying to pass the time under Chichihualco’s blazing sun. 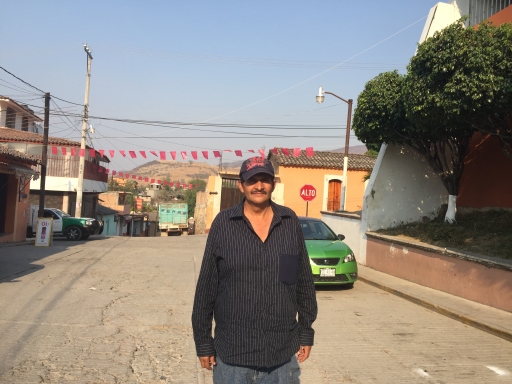 Displaced farmer Roberto Medina Hurtado, from La Sierra, stands in the town of Chichihalco on April 17, 2019.

“The government has provided us with the humanitarian support, but not with security. ... We’ve heard the National Guard is being established… but when is it going to come to Guerrero?”

“The government has provided us with the humanitarian support, but not with security,” said Hurtado.

“We’ve heard the National Guard is being established … but when is it going to come to Guerrero?”

Many of the displaced say there has been no real, ongoing safety from deadly violence in either La Sierra or La Montaña since at least 2013.

“More than 10 people were killed in one day in Chilapa [in La Montaña] in January,” Hurtado said, referring to an armed confrontation that occurred between Los Ardillos and a community self-defense group on Jan. 27.

Hurtado acknowledged that, in attempting to bring security to Guerrero, the AMLO administration “has a huge task.”

“The previous administrations did nothing,” he said.

Official government figures released recently showed that Mexico has just undergone the most violent first quarter of the year in recent history. A total of 8,493 people were killed, a 9.6% increase from the same period in 2018.

In response, AMLO promised that, through an improvement in the welfare provided to citizens, the creation of the National Guard and the eradication of corruption, the country will see a reduction in insecurity in six month’s time.

Whether or not the president can deliver on such bold commitments remains to be seen. Meanwhile, the displaced of Guerrero State will wait in Chichihualco, dreaming of a peaceful return to their villages and farms.