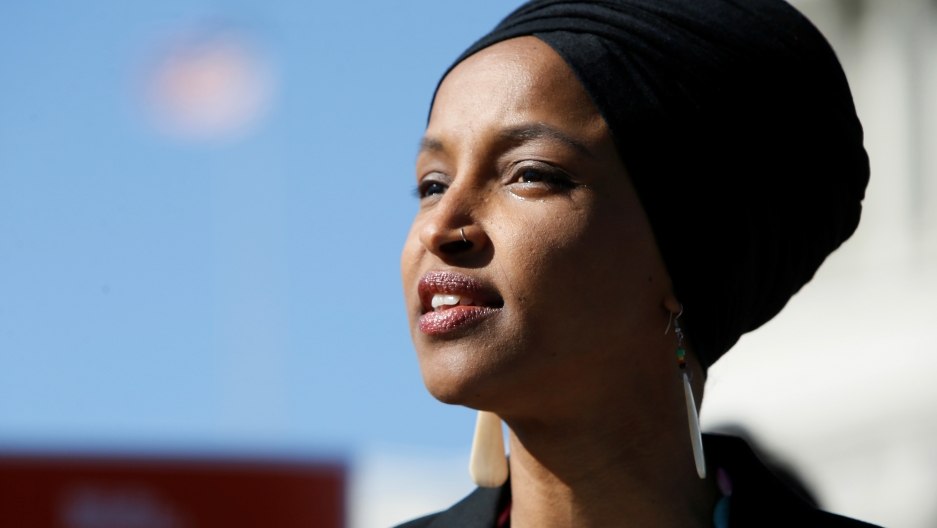 Rep. Ilhan Omar speaks about Trump administration policies toward Muslim immigrants and her own immigrant background at a news conference by members of the US Congress to announce legislation to repeal Trump’s existing executive order blocking travel from majority Muslim countries, Washington, DC, April 10, 2019.

Hundreds of Yemeni American deli owners across New York City have stopped carrying the New York Post on their newsstands in response to what they viewed as an inflammatory cover it ran last week targetting Rep. Ilhan Omar of Minnesota. They're worried the cover could inspire more threats of violence toward Omar and her fellow Muslim congresswoman, Rep. Rashida Tlaib.

The cover depicted the Twin Towers burning on 9/11, along with a partial quote from Omar's recent speech to the Council on American Islamic Relations in which she decried Islamophobia. "CAIR was founded after 9/11, because they recognized that some people did something and that all of us were starting to lose access to our civil liberties," Omar said, in explaining how Muslim Americans are often collectively blamed for the actions of a few.

President Donald Trump on Friday took the New York Post's cover a step further with a tweet depicting part of Omar's tweet with video footage from the 9/11 attacks and the words, "WE WILL NEVER FORGET."

In a statement posted on Sunday to Twitter, Omar said she had "experienced an increase in direct threats" on her life in response to the president's tweet.

We are all Americans. This is endangering lives. It has to stop. pic.twitter.com/gwB2kDUIRp

Debbie Almontaser is the co-founder of the Yemeni American Merchants Association. She's also the author of a book on public school communities called "Leading While Muslim: The Experiences of American Muslim Principals After 9/11."

Almontaser spoke to The World's host Marco Werman on how the protest came about and what they hope to achieve.

Debbie Almontaser: It came about by our members, who simply just called and said, “We are outraged about this. We can't believe what we're seeing.” The Yemeni American community has an affinity for [Omar] because her mother is Yemeni. And so we have this special connection to her. And so they called and said, “What can we do?” And we said, “Well, what would you like to do?” And some of them said, “We want to boycott the paper.” Our board members contacted 10 influential Yemeni American merchants who own between five and 10 small businesses, which we call bodegas and delis here in New York City, and all of them were on board.

Marco Werman: How do you know there is a link between this front page of the New York Post and a rise in Islamophobic attacks?

We see this every day. Whenever there is negative publicity promoted by the media, we hear reports of hate crimes in our communities. I'm sure that you probably saw what happened in a New Jersey school, where a girl’s hijab was actually pulled off on Friday, and it's been circulating in the news. We've seen Rep. Ilhan Omar herself receive death threats, and someone here from New York actually said they will put a bullet through her skull. And this man has been arrested and indicted.

Related: Two House reps sworn in on the Quran

Back to your point that this happens every day. There was just the New Zealand Christchurch mosque shootings, which led to Islamophobic threats and attacks here in the United States. How do you know this front page is responsible for these particular threats?

...We see the reports of hate crimes and bigotry against people and sadly, within our communities. Some people are too afraid to report these things. And there are a lot of hate crime incidents that are actually underreported because people are afraid to go to law enforcement. And I think the position and the stand that the Yemeni American Merchants Association has taken right now is one that is very brave and is widely being supported, not only by the American Muslim community but nationally, on a whole — I can't begin to tell you the messages that we're getting on Facebook, messages I'm getting personally, of commending [us] for doing this. And we are going to remain steadfast in our demands and making sure that this boycott campaign against the New York Post will continue for the next 30 days until we hear from them. And if we don't hear from them on our demands, we are ready to take further action.

Further action is actually identifying some of their advertisers and getting their advertisers to pull out. For example, you have Mercedes and Nordstrom, and we are saying to them, "you are directly subsidizing hate," and we are requesting them to choose between their customers around the world and this agent of hate and violence: the New York Post.

Your demands are pretty high — I mean, the removal of the editor-in-chief of the New York Post. Rupert Murdoch, a good friend of the president, owns the Post. Does that worry you?

No, it doesn't worry us. We're going to continue [being] steadfast. And we have to demand the removal of Stephen Lynch, the editor-in-chief. He should be more responsible. Allowing his reporters to put something out like this is very irresponsible. It is inciting hate, it is inciting violence, it is putting Congresswoman Ilhan Omar's life in danger, as well as American Muslim women who look like her who walk the streets of the United States.

But then this also goes beyond the New York Post when the president of the United States is tweeting things in the very same vein.

Absolutely. And we hope that our message boycotting the New York Post is going to send a message to him that he needs to be more responsible as the leader of this nation.