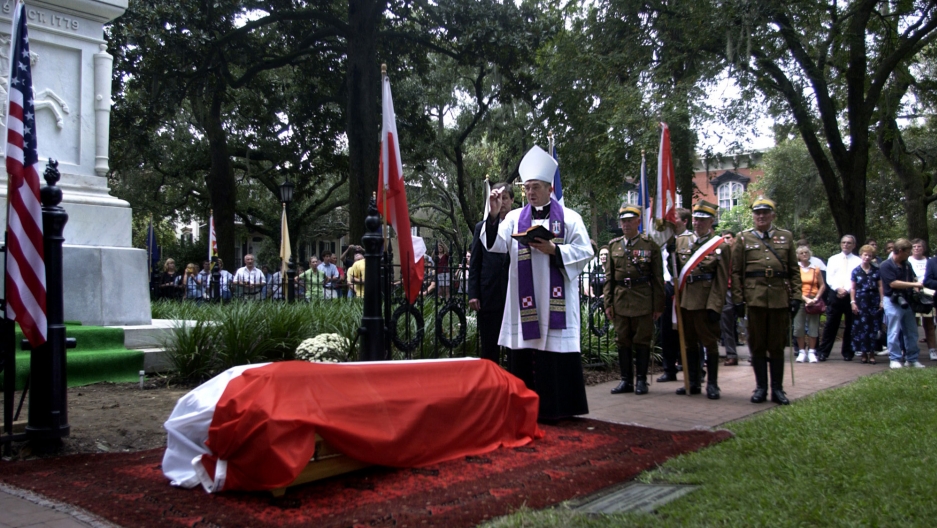 Polish Bishop Tadeusz Pwoski sprinkles holy water on the casket of Brig. Gen. Casimir Pulaski in Savannah, Georgia, 2005. The remains were buried after being exhumed for testing in 1996.

Polish-born American revolutionary hero Casimir Pulaski was known as "The father of the American calvary." He died at the young age of 34, during the Revolutionary War, soon after being fatally wounded during the Siege of Savannah in Georgia. But questions have always lingered about his burial.

In downtown Savannah there's a monument at Monterey Square honoring Pulaski — some believe this was his resting place. Other records say that he was buried at sea, somewhere between Savannah and Charleston, South Carolina. It remained a mystery.

But when the Pulaski monument started to crumble and the city of Savannah decided to rebuild it, experts did a full forensic workup of the skeleton to check if it was, in fact, Pulaski. That's where Dr. Virginia Hutton Estabrook came into the picture.

Hutton is a professor of anthropology at Georgia Southern University and she was part of the team that worked on the Pulaski case. When they exhumed the skeleton they discovered something surprising.

"What was discovered then was that the skeleton looks very female for all of the points that we use forensically to look at sex," Hutton told The World. "All of those points skewed in the very female direction. There's some geometry of a female pelvis that basically widens the birth canal area a bit. It's sort of like the way these things are expressed are all very female looking."

Marco Werman: What do these female traits tell us about General Casimir Pulaski?

Dr. Virginia Hutton Estabrook: What they tell us is that there is some level of female pattern development happening in Pulaski, in this person that we have baptismal records from. And he's baptized as Casimir and he's baptized as the son of his parents. And this linguistic difference in social sciences between sex and gender actually comes to pretty good use here. His gender was absolutely masculine throughout his life. There's no question of what his social role was from birth on. And because he was baptized as a son, there's early portraits of him that clearly show facial hair and you know even some little hair male pattern baldness thinning going on. There's definitely features that show some presence of androgens happening in his body. So, this is where we get the intersex idea.

So, what would all of this have meant back in the 1700s? I mean, as an anthropologist, do you have any sense of how someone who was intersex perhaps in the 1700s would have been viewed by their family, their colleagues and, maybe more importantly for Casimir Pulaski, his troops under his command?

We try to look a lot in written records about him, in letters, to see if there is anything about that that we can really see manifest in any of his relationships. One thing we do know about Pulaski was that he was never married. There's discussions of him being a little removed from people who are possibly a little bit aloof, but again, sort of grain of salt with this that he really didn't speak English very much coming here. But he was obviously very amiable, chatty, especially to people who he could speak French with and things.

[Intersex] is actually a relatively common thing that we've not included in our interpretations of the past.

So, what do you find compelling about this discovery?

From an anthropological perspective, what's really important about this is that we really don't know how intersex conditions affect skeletal development because this is not necessarily something that clinicians are terribly concerned with. That means that we just don't know what intersex looks like — if there are any kind of diagnostic telltale signs that we should be maybe looking for. Also, another thing that I did not really realize going into this was how common intersex actually is in the population. It's one in 1,500 births and possibly as common as one in a hundred if you cast a slightly wider net around what is an intersex condition versus not. So, this is actually a relatively common thing that we've not included in our interpretations of the past, which makes having the skeletal remains of an individual that we know a lot about his life so unique. So, there's the whole anthropological side of this, and then there's the whole Pulaski side of this that makes the story interesting too.

Why is that interesting? Because I read this news and I was fascinated by it over the weekend, but I kind of came to the end of the story and I was like well, so what have Pulaski had a pelvic bone more female than male? What does that actually do to our understanding of a Revolutionary War hero or of the time he lived?

This doesn't really change what Pulaski did or his legacy. What this does change is that intersex people who have been largely erased from any kind of history — this is the presence of at least one that we know about and have relatively good reasons to think that he was intersex. So, this is an individual that has been celebrated, has lots of streets and highways and cities and counties named after him, that could possibly be this intersex hero and be relevant for a new group of people that he really hasn't been necessarily relevant to in the past.

Is it determined now for sure that Casimir Pulaski was intersex?

What we have farily certain is that this is Pulaski in this monument. What's also fairly certain is that this skeleton has these very, very female teachers. And yet we have this life of Pulaski that we need to reconcile with those very female features. The best hypothesis, currently, is that it's intersex. Coming to some kind of idea of what kind of intersex or figuring out what the sex chromosomes are is not currently possible at this time. So, we were unable to extract any nuclear of DNA from these remains that would really show which intersex condition and what's going on chromosomally.

The monument to Pulaski is still there in Savannah?

Oh, yes. And Pulaski is no longer buried inside of the monument. He's buried alongside the monument. There's a marble slab that almost all of his skeletal remains are buried underneath.

Do you think the plaque — I'm assuming there's a plaque on it — should the plaque be rewritten at some point to acknowledge this discovery, you know, to maybe unerase the intersex people in history?

What would it say?

It's a hard thing to say what should be on the plaque because at some level, there should be an acknowledgment of intersex, but also his accomplishments were not that he was intersex. His accomplishments [were] that he was Casimir Pulaski, the guy who created a really, really functional American cavalry at a time when this was, like, cutting-edge technology and was this charismatic leader that inspired lots and lots of people around him.

Yeah, it's kind of a double thing because you don't want the Pulaski story just to be about that he was intersex. Because that's really not most of his story — that's just kind of like this extra little tidbit. But, you know, it's also this tidbit that might completely cast a different light on aspects of his story that we haven't really thought about or haven't really looked at in such great detail in examining his biography as maybe we could or should have in the future.