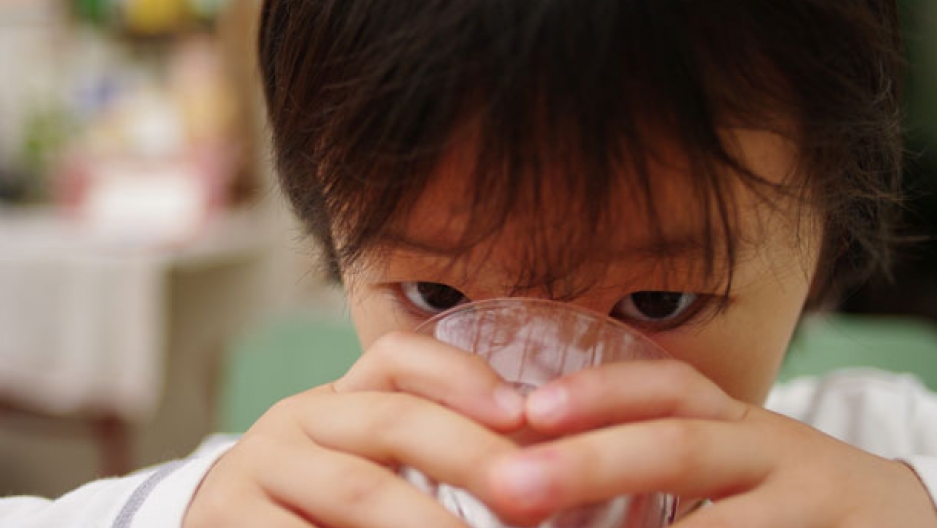 Lead in drinking water is particularly dangerous for young children and fetuses. Even very low levels of lead in the early years of life can lead to learning disabilities, impaired blood cell formation and damaged nervous systems.
Credit:

Hundreds of thousands of citizens may be at risk of lead exposure from their tap water in Newark, New Jersey.

The city recently started handing out water filters to some of its citizens after plans to replace the city's lead piping system stalled. The National Resource Defense Council has sued the city of Newark to force it to respond to its water contamination problems.

“Newark has pretty serious lead contamination, which has been going on for at least a couple of years,” says Erik Olson, the NRDC’s Senior Director of Health and Food. “We know that at least since January of 2017, the city had levels of lead that far exceed the EPA's ‘action level,’ as it's called. A lot of kids, especially, are being put at risk from that."

Newark is just one of the thousands of communities across the US still served by water systems that are in violation of federal lead standards, according to recent studies. The NRDC says more than 18 million people nationwide are at risk of lead exposure from their water. Exposure to lead in the womb or during early childhood has been linked to learning disabilities, lowered IQ, behavioral problems, school delinquency and even crime later in life. Some of these effects appear to be irreversible.

Scientists agree on one key point: There is no safe level of lead. Studies have shown that even very low levels of lead can cause harm to a child's brain, especially if the child is young and still developing.

The American Academy of Pediatrics recommends no more than one part per billion of lead in any school drinking water. The Environmental Protection Agency’s target for treating water is 15 parts per billion. In some areas of Newark, levels are currently running at about 51 parts per billion, Olson says.

Like many older cities, Newark has thousands of water service lines made from pure lead. These are the pipes that connect the water main in the street to people's homes.

“The problem, of course, is that lead is poisonous and when water runs through the pipe, it's sort of like drinking your water through a lead straw,” Olson says. “Estimates are that as many as six million to 10 million homes in the US are served by these lead pipes. And because the city of Newark isn’t treating its water correctly to make sure it is not corrosive, that corrosive water is leaching lead out of the pipes — and even out of indoor plumbing — and contaminating the tap water in many homes across the city.”

In Newark, schools have installed filters in order to try to reduce students’ exposure to lead. And now, after NRDC sued the city on behalf of local citizens, Newark has started to offer water filters to about 40,000 households across the city. “The filters are not being offered to everyone in the city, which is a big problem, but we're hoping that they’ll get filters for everybody until they actually fix the [underlying] problem,” Olson says. “Everybody at risk should be protected.”

For the vast majority of homes, however, filters are only a temporary measure, Olson says. To protect its citizens over the long term, Newark needs to do two things: First, it needs to treat its water so it doesn't leach lead out of lead pipes; secondly, they need to pull all the lead pipes out of the ground. “Even a corrosion-control treatment is not a full solution to the problem,” Olson notes. “People can continue to be exposed to lead until the pipes get pulled out of the ground.”

Digging up streets, pulling out a huge network of lead pipes and putting in new pipes is expensive, but some cities have already done it and others are beginning the process, Olson says.

“You don't actually have to dig up the entire street and the entire front lawn [anymore],” he explains. “There are now newer technologies in which you can just dig a small pit at each end of the lead service line and pull a new pipe through while you pull out the old lead pipe. It's much cheaper and more efficient.”

But cost is not the only issue facing state government officials, Olson says. In some cases, city officials, water utilities and anti-regulatory forces apply political pressure on state agencies not to bring enforcement action. They also push for cuts to EPA’s budget and to state environmental agency budgets to limit enforcement resources. This has created a culture, Olson says, in which cities and utilities “can violate safe drinking water rules with impunity.”

An NRDC survey of violations and enforcement actions found that only three percent of violations nationwide faced any threat of penalties. “I think that sends a pretty clear signal,” Olson says.

On a hopeful note, Olson points out that many newly elected members of Congress have spoken out about this problem and want to invest in the country’s drinking water infrastructure.

“We know it's going to cost billions of dollars to fix these lead contamination problems and other drinking water contamination issues,” he says. “I think there's a good chance, especially if the public pushes hard, that infrastructure legislation could address this issue and could help pay for pulling these lead pipes out of the ground. So, stay tuned.”