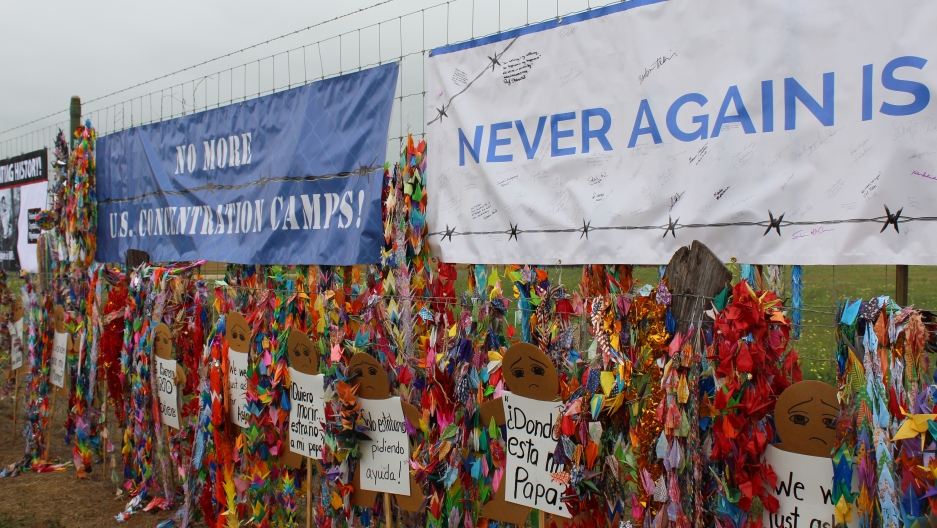 Hundreds of Japanese Americans from across the US folded cranes to contribute to the protest at the Dilley, Texas, detention center on March 30, 2019. “In our culture the crane is a creature of transformation,” explained Michael Ishii. “When you folded 1,000 cranes you could make a wish for peace or health for somebody. We asked for 10,000 cranes ... we received over 25,000.”

Outside a detention facility on the US-Mexico border, a group of Japanese Americans have strung together a chain of more than 25,000 origami cranes.

They wear T-shirts and wave banners that say “Stop repeating history!” This group of Japanese Americans — survivors of WWII incarceration camps and their descendants — have a message: “Not OK then, not OK now!” 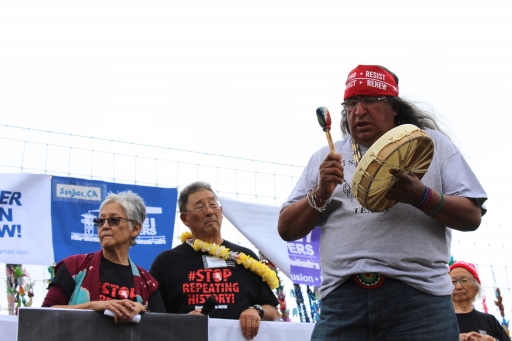 Juan Mancias, chairman of the Carrizo/Comecrudo tribe, sings and drums during a healing ceremony at the protest March 30, 2019. Behind him are siblings Satsuki Ina andKiyoshi Ina, both incarcerated at Crystal City as children.

The“tsuru for solidarity” cranes are wrapped along the fence of the perimeter of the country’s largest immigrant detention facility, the South Texas Family Residential Center in Dilley, Texas. As many as 2,000 refuge-seeking women and children are currently being detained there.

“Hatred, racism, and political failure has led to a repetition of mass incarceration of innocent people,” Satsuki Ina, one of the organizers of the protest, told the crowd.

Ina, 74, was born in California’s Tule Lake concentration camp and later spent part of her childhood incarcerated at the Crystal City detention facility, just 45 miles down the highway from the site of Saturday’s protest. She was one of the 120,000 people of Japanese descent incarcerated by the US government during World War II in an act the government later acknowledged was based on “racial prejudice, wartime hysteria, and a lack of political leadership.”

She and fellow survivors who joined her in Texas are on the other side of the barbed wire now, but they say they want the world to know that will not sit idly by and watch injustice happen again.

"Americans turned their backs on us as we disappeared,” Ina explained via email. “Nobody marched for us, nobody protested, but today we bring our voices, our drums, our tsuru spirit to speak out against unjust mass incarceration." 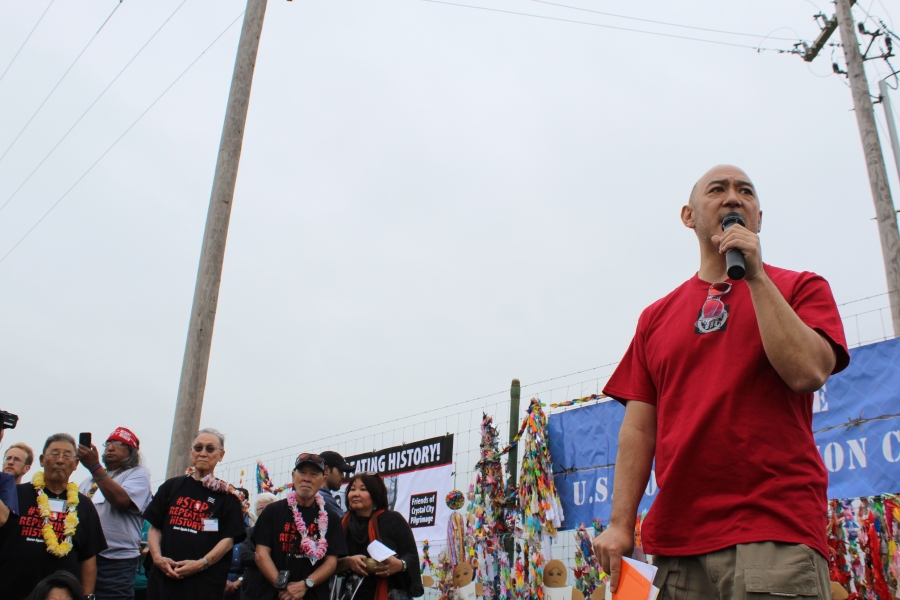 “Each one of us represents thousands of people back home from all over this country who are here today in spirit,” co-organizer Michael Ishii told the crowd of protesters and observers.  “And each of these cranes represents family members who were incarcerated, it represents our ancestors who we bring here today. We are here not only to oppose what’s happening here in these camps, but also for the healing of our people. … It’s important for us to be here. We had to be here today.”

Before protest, a pilgrimage

The protesters began their day with a two-hour bus ride to Crystal City, where the US Department of Justice operated a detention facility from 1942 through 1948. The majority of residents were Americans and Latin Americans of Japanese descent, but several hundred families of German descent were also imprisoned there.

They practiced chants and songs for the protest and watched short films about Crystal City, including an Immigration and Naturalization Service-produced propaganda film from 1943.

A female voice clinically narrates mundane details of life in Crystal City as a camera pans over footage of barracks, detainees arriving by train and a guard tower positioned along the fence surrounding the 100-acre property.

“The sun shines practically every day of the year,” the narrator says.

More than 4,000 men, women and children were imprisoned at Crystal City during its six years of operation, often forced to performed unpaid work. For children, the schools in the camp lacked funding, books and teachers.

Related: The US imprisoned Japanese Peruvians in Texas, then said they entered ‘illegally’

The film closes with halcyon views of children playing in the camp swimming pool, a dilapidated farm irrigation tank that had been paved-over due to public health concerns. 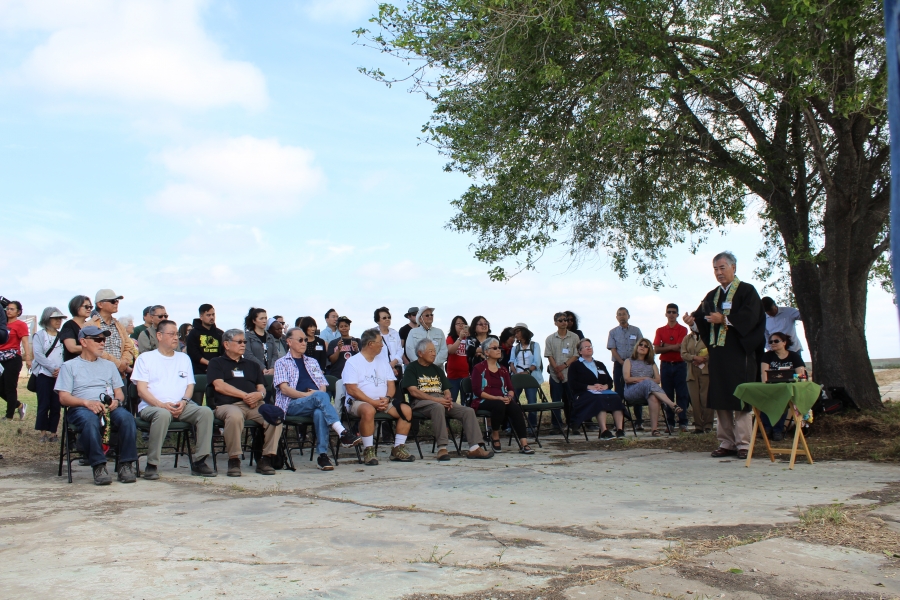 Survivors of WWII incarceration and their descendants gathered for a memorial service March 30, 2019, at the site of the former Crystal City detention center swimming pool, one of the few remaining structures from the camp. They were joined by the the town of Crystal City’s current mayor, council members, and city residents.

The pool is one of the few ruins that survives at the camp.

The group gathers there for a memorial service for two Japanese Peruvian girls who drowned, as well as others who died at the camp. Gusts of wind draw cyclones of dirt and debris over the remains of the pool as Rev. Ronald Kobata of the Buddhist Church of San Francisco begins chanting the service. 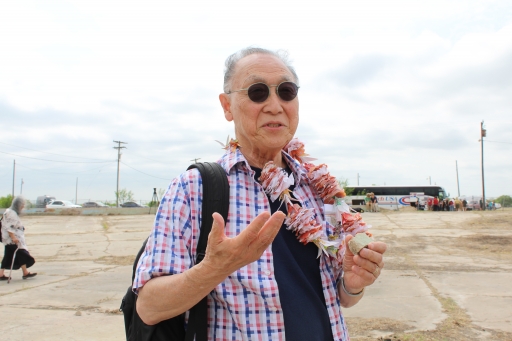 Kazumu Julio Cesar Naganuma holds a piece of the Crystal City pool, a relic of his childhood incarceration. His sister was friends with two fellow Japanese Peruvian girls who drowned after slipping into the deep end of the pool.

Kazumu Julio Cesar Naganuma, 76, a Japanese Peruvian who was incarcerated at Crystal as an infant, is given a chunk of concrete from the original pool floor.  A visibly emotional Naganuma explained that his sister, Sumika, had been friends with the girls who had drowned.

“None of us, that I know, anyways, have any artifacts from camp,” Naganuma said.

He said he plans to put the concrete in a special display and share it with his family.

“They’ll feel one small step closer to what took place at Crystal City,” he said.

Naganuma and his family of nine were among the 2,200 Latin Americans of Japanese descent forcibly relocated from Latin America by the US government and then detained at Crystal City. They had been well- off in Peru — his father was a successful businessman and an active member of Japanese Peruvian society. 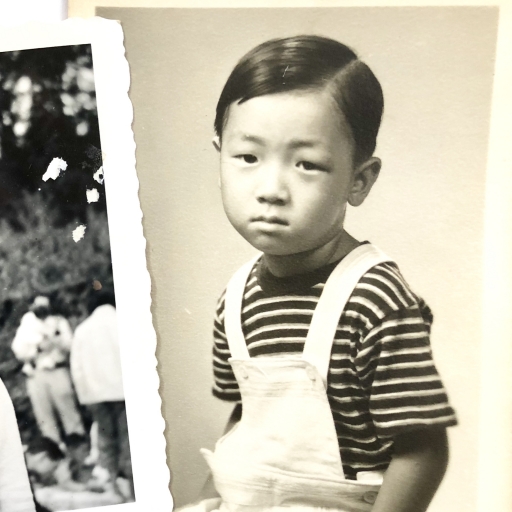 A photo of Kazumu Julio Cesar Naganuma as a child at the Crystal City detention facility. He was only 20 months old when he and his family were forcibly removed from their home in Callao, Peru.

“We lost everything,” Naganuma said.

He says he joined this pilgrimage, in part, to begin to understand what his parents might have experienced.

After the war ended, the US classified the Naganumas and others they had forcibly brought to the US as “illegal aliens.” The Peruvian government refused to allow the vast majority of its Japanese citizens and residents to return home. “Repatriating” to Japan, a country devastated by war and foreign to those who had lived most of their lives in Peru, was not a viable option for many of the detainees.

Naganuma and his family were incarcerated at Crystal City until 1947, when a fellow internee sponsored them to leave camp, then helped them relocate to San Francisco.

In addition to wanting to understand his family’s past, he felt compelled to speak out.

“I never really had a chance to publicly express myself,” Naganuma said before his trip to Texas. “I think it’s important, especially with our current administration. They’re repeating history again.”

After a pilgrimage, activism

It’s hard to not compare the South Texas Family Residential Center and the Crystal City camp.

Bob Libal, director of Grassroots Leadership, an anti-incarceration advocacy organization that provided ground support for the protest at Dilley, says that the “visuals are eerily familiar.”

“[They’re] on the same highway, they’re both places where families live, the language is exactly the same,” Libal says. “Dilley was built on the site of an oil worker man camp, Crystal City on site of agricultural workers camp.”

Japanese Americans have been spurred into action because of these similarities.

After the protest, some of the group spent the rest of the week doing more: They handed out backpacks to women and children released from the Dilley detention facility. Others met with undocumented organizers and left a string of cranes across the Laredo bridge leading into Mexico. Some traveled to Austin to meet Texas state legislators and speak in opposition to SB-4, an anti-immigrant bill that critics say condones racial profiling.

Plans are underway to develop a national coalition demanding an end to US immigrant detention facilities and to return to Texas later this year for a second pilgrimage and protest. Organizers said they expect even more survivors and descendants from across the US and Latin America to attend.

Back home in San Francisco, Naganuma said he was moved by the whole experience of returning to Crystal City and meeting undocumented individuals and refugee-seekers.

“They’re seeking asylum and they’re treated like trash,” he said. “It’s just a shame to see this happening in 2019. I’m more committed now to helping.”

Natasha Varner is the Communications and Public Engagement Director at Densho, a nonprofit organization that preserves the histories of Japanese Americans.